Since its first attempt in 1976 by Mills and King (1), transcatheter closure has become an accepted alternative to surgical repair for ostium secundum atrial septal defects (ASDs) (2). The technique is commonly offered as first intention treatment. Safe and effective closure is achieved in at least 80% of the unselected ASD population. Complex ASD, which is usually defined as defects >38 mm in diameter and/or deficient rims other than antero-superior, are often not considered amenable to transcatheter closure and referred for surgery (3). However, other criteria such as low age/weight, multiple defects, comorbidities and associated cardiac malformations may also contraindicate device closure. This article reviews our experience and provides a comprehensive, up-to-date description of the current literature to better define indications and contra-indications for device closure of ASDs.

ASD closure is indicated in the presence of a significant left-to-right shunt, defined by a significant right heart enlargement due to volume overload, regardless of symptoms (3,4). Descriptions of percutaneous device closure of a secundum ASD have been extensively reported in other articles and will therefore not be detailed in this paper. After transoesophageal echocardiography under general anaesthesia was the exclusive imaging method for more than 10 years, recent innovations are now towards imaging guidance modalities. Intracardiac echocardiography (5), and more recently transthoracic echocardiography (6), have been introduced as acceptable alternative imaging guidance methods. They both carry the advantage of obviating the need for general anaesthesia.

Small defects with no right ventricular volume overload are not considered for closure, unless there is evidence of right-to-left shunting causing significant hypoxaemia and/or paradoxical embolism (4).

Numerous cohort studies have reported the feasibility of transcatheter closure in complex cases, sometimes using a variety of modified implantation techniques such as the balloon-assisted technique (6,8-15). Secundum ASDs >38 mm have been reported to be suitable for transcatheter closure by experienced operators (6,8,13,14). A key point is to understand that the concept of using the diameter of the defect to choose the appropriate device size is wrong because ASDs usually are not round. A single ASD dimension is reported in most studies, although this clearly does not reflect the true ASD shape or area. Because any measured diameter usually reflects the maximal diameter of the defect, an oval ASD measuring for example 43 or 44 mm in its long axis could be suitable for transcatheter closure if the short axis diameter is much smaller (Figure 1). For small children weighing less than 20 kg, some authors are using a device/patient weight ratio and consider that transcatheter closure should not be performed if this ratio exceeds 1.5 (15). This does not reflect our experience, as we have routinely performed transcatheter device closure in small children with a device/weight ratio up to 2.3 (16), however, caution is needed. In a few cases, mild functional mitral regurgitation can occur in such patients with a large left-to-right interatrial shunt. In most cases this mitral regurgitation has a favourable outcome and is due to the sudden rapid change in volumes after removal of the left-to-right shunt (Figure 2). Three-dimensional echocardiography studies should better clarify the anatomical limits for device closure, as they use more accurate measurements such as the circular index of the ASD, which is defined as the ratio of the maximal diameter to the minimal diameter on the 3D-image (17,18). More recently, Wang et al outlined the benefits in the use of 3D print models to identify the optimum device size in comparison to ASD defect (19). 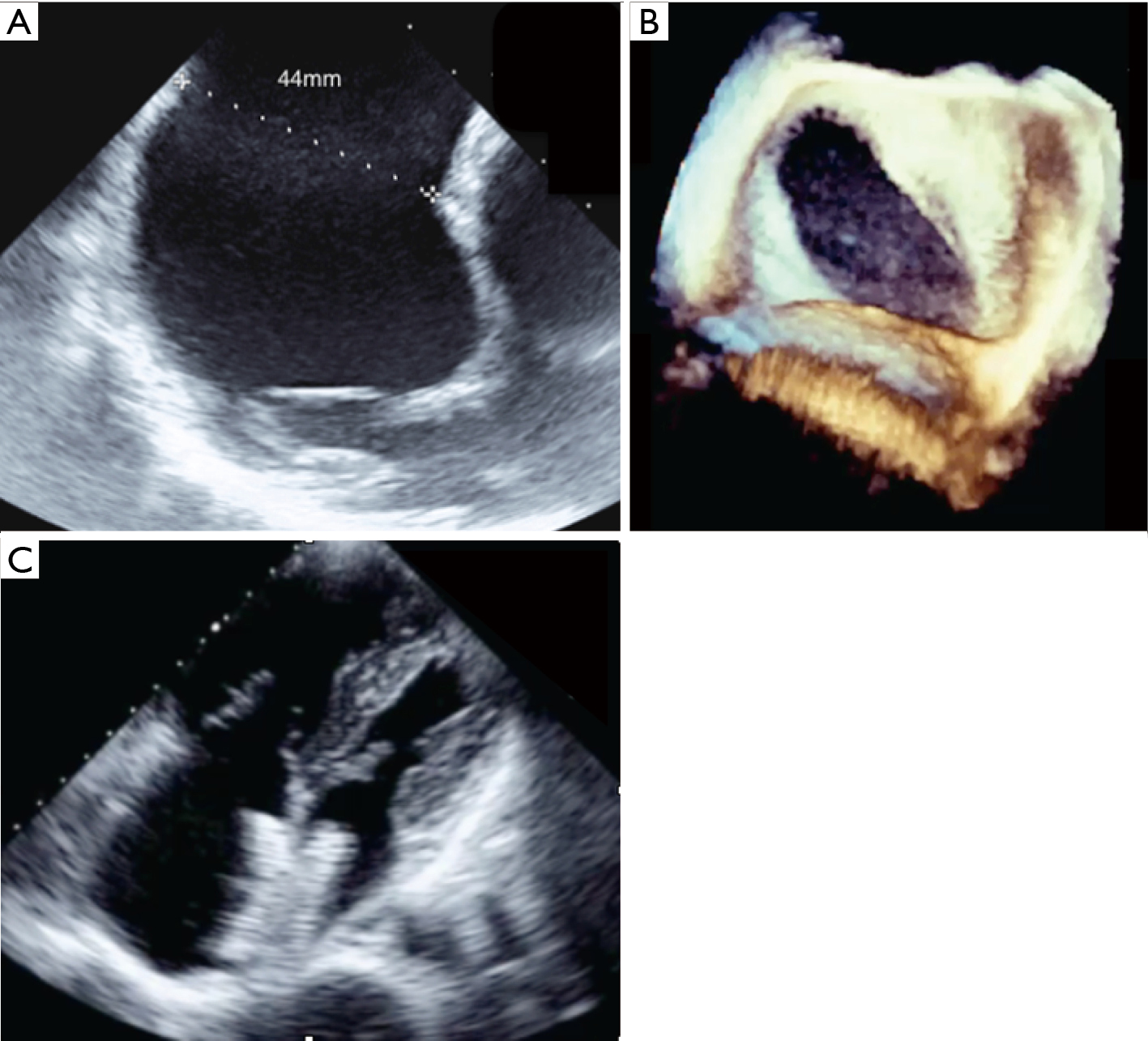 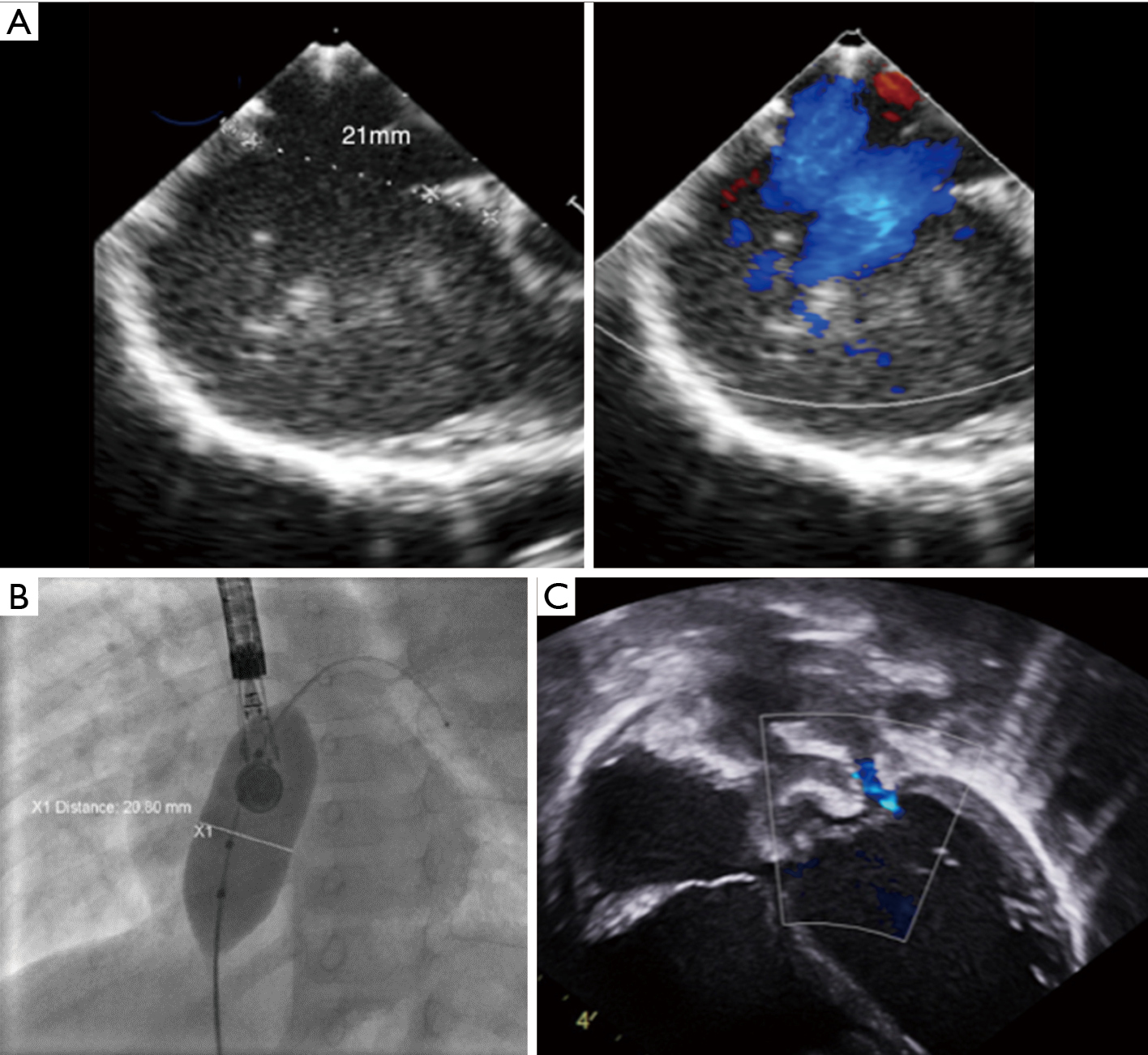 Complex cases also include defects with deficient rims (6,8-14,16). These defects are also usually suitable for transcatheter closure, the only exception being a deficient posteroinferior rim (towards the inferior vena cava). Indeed, even if a device can be deployed and well positioned in these cases, the risk of early device embolization is considerable, simply because the defect can easily slip toward the inferior vena cava. Device migration usually occurs immediately or a few hours after device implantation (Figure 3). In some cases, the device may stay stable but will potentially cause right-to-left shunt by straddling the inferior vena cava and then redirecting part of the blood flow through the left atrium. All the other secundum ASDs with deficient rims are usually amenable to transcatheter closure. In particular, defects with total deficiency of the posterior rim toward the pulmonary veins can be successfully closed most of the time. Importantly in these latter cases, balloon-assisted technique is often necessary because the left atrium is often small and the device may tend to prolapse through the defect (6,8). It is then important to differentiate deficiency of the posteroinferior rim from deficiency of the posterior rim alone, as the former is more at risk of embolization and residual right-to-left shunt, whereas the latter is suitable for device closure. Sub-costal view of transthoracic echocardiography usually provides adequate imaging for this (Figure 4). 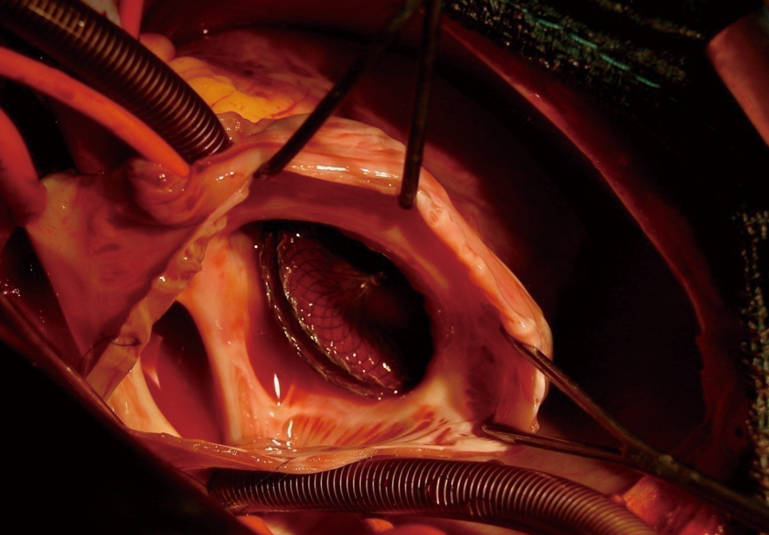 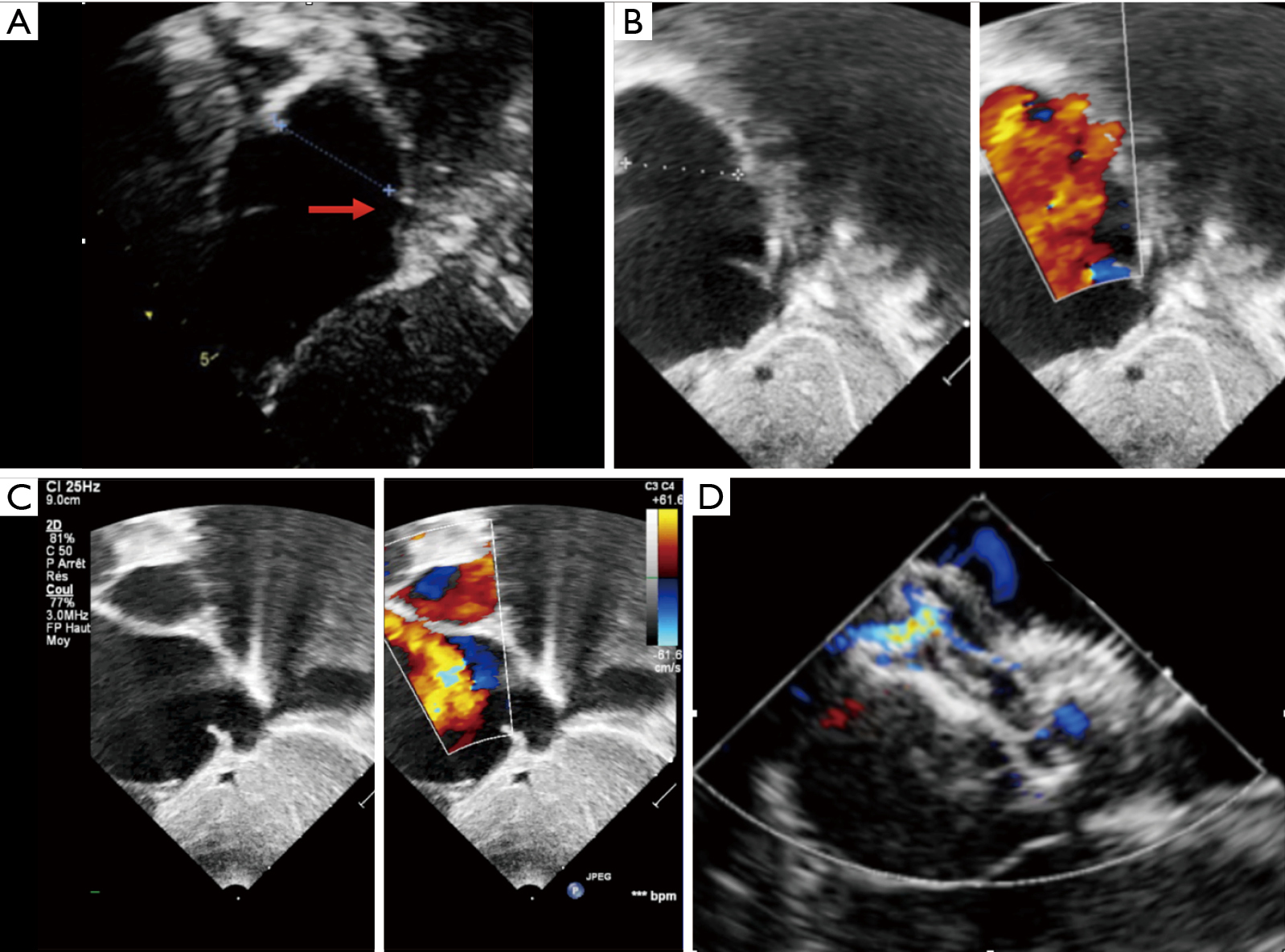 Finally, some studies reported a risk of erosion with the Amplatzer septal occluder, especially in cases of either deficient antero-superior rim or oversized devices (20). However, the concept of oversizing a device is inaccurate because this is based on a single diameter that does not reflect the true area of the ASD, as already stated. Additionally, studies on erosion failed to consider that multiple attempts with more traumatic modified implantation methods such as deployment of the left atrial disk into the upper right and left pulmonary veins as well as complex intracardiac manipulations for successful device implantation might be used to close such defects. We believe that such modified implantation methods may traumatise the cardiac structures and that erosion may consequently occur after such manoeuvres. In this sense the modified balloon-assisted technique might be more appropriate because although an additional venous access is needed, it is much less traumatic (6,8).

Multiple defects as well as aneurysmal interatrial septum are often referred for surgical closure (3,15). However, it has been shown that percutaneous closure is safe and feasible by experienced operators in cases of large septal aneurysm and/or multifenestrated atrial septum (8,14). Also, it is important to recognize that a single defect may mimic multiple defects on some views, due to irregular borders extending like tentacles. In some views such extension of the defect can then be seen as multiple additional holes (Figure 5). These “octopus defects” can be suspected when a large main defect is seen surrounded by small additional defects. This can successfully be closed with a single device. Similarly, in cases of true multiple ASDs a single “cribriform” device often provides effective and complete closure (21). Three-dimensional echocardiography monitoring can be particularly useful, especially if multiple devices are positioned. In our experience, the more successful strategy is to use one ASD device to close the biggest defect, followed by another large cribriform type device to close the remaining defects (Figure 6) but this requires assessment on a case-by-case basis. Secundum ASDs can also occur with dextrocardia with or without situs inversus, in which case they remain amenable to transcatheter closure using the same criteria as for ASDs in situs solitus (Figure 7). 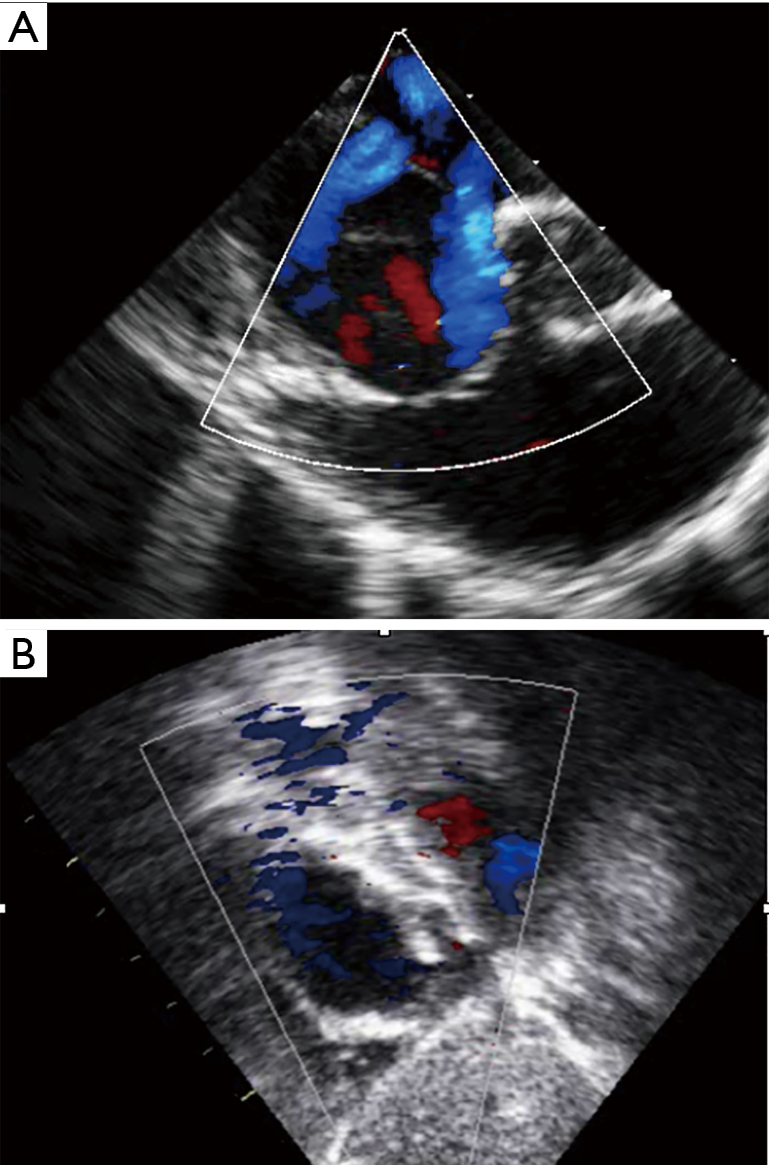 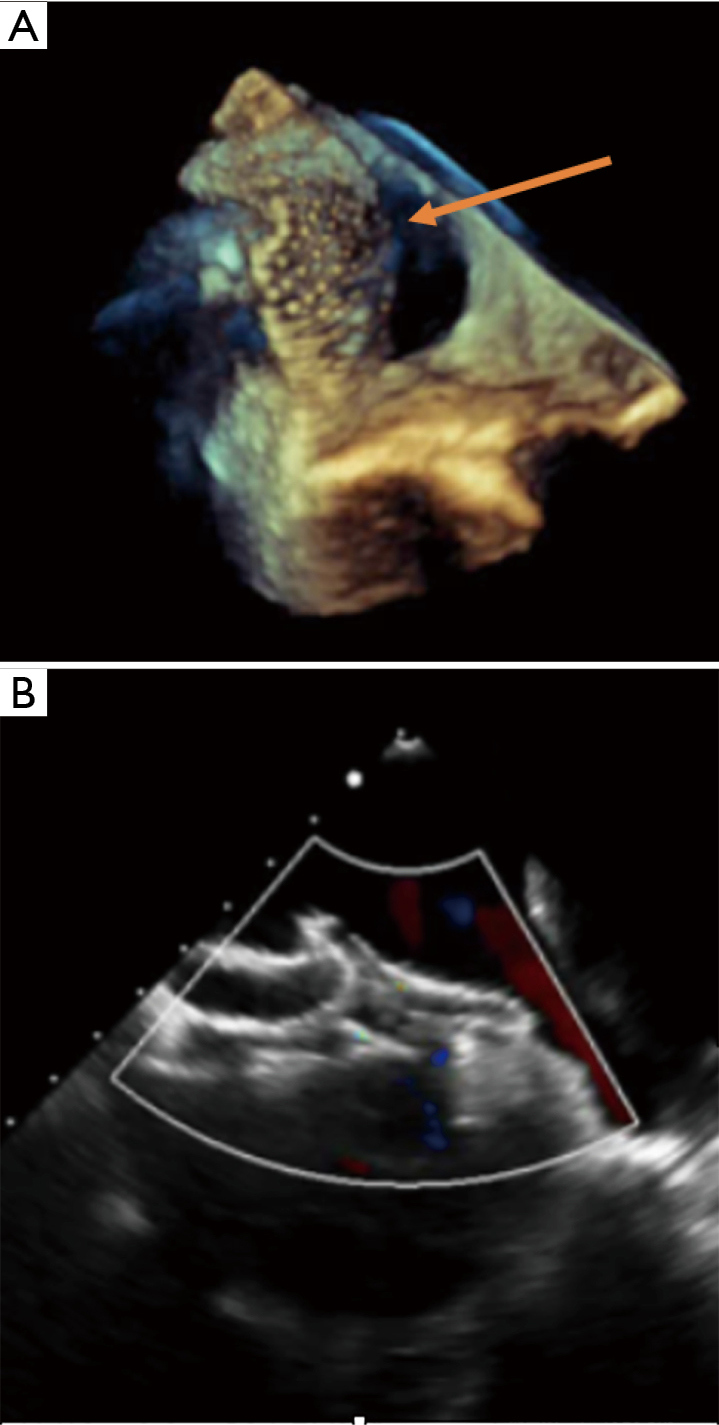 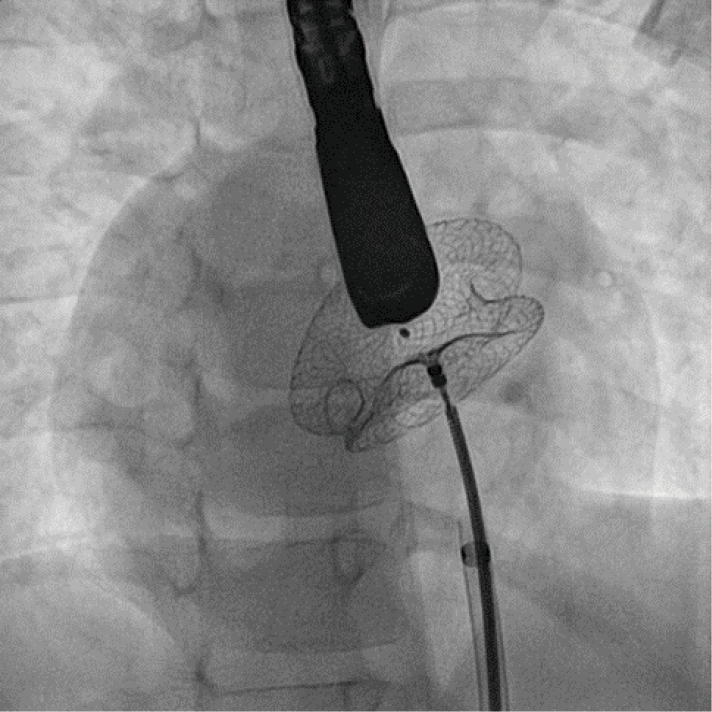 Figure 7 Fluoroscopy in left anterior oblique view showing closure of a large atrial septal defect in a patient with dextrocardia and situs inversus.

Some ostium secundum ASDs associated with partial anomalous pulmonary drainage may be closed percutaneously if the remaining shunt remains negligible. This is particularly true for partial anomalous pulmonary return of the left upper pulmonary vein into the innominate vein. In patients with interrupted inferior vena cava and small-to-moderate ASD without deficient rim, transcatheter closure can be accomplished via the jugular vein and the SVC, using steerable sheaths. This is usually feasible in relatively small defects with adequate rims (22). Transhepatic route for closure of larger defects can also be used (Figure 8). 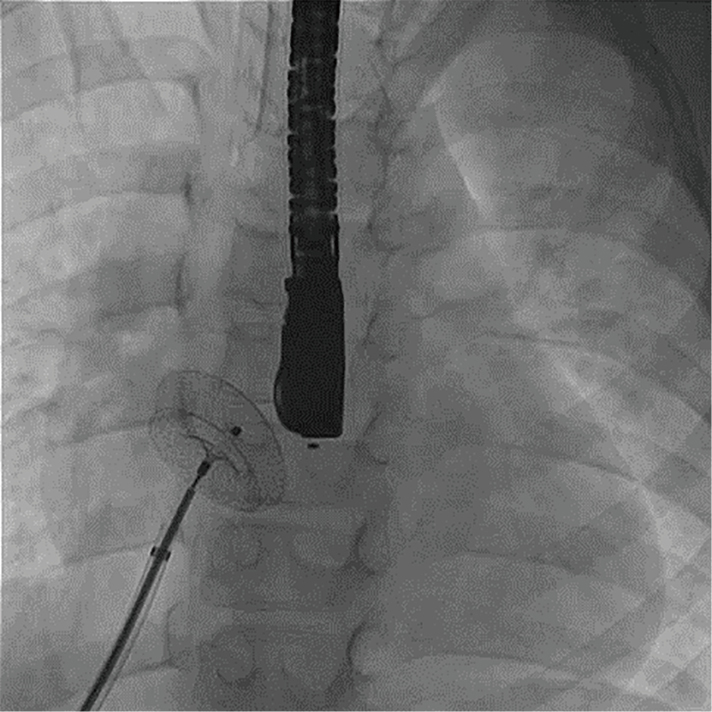 Atrial arrhythmia is the most common complication in the natural history of ASDs, which have not been closed. Atrial fibrillation is the most frequent arrhythmia before and after surgical closure of ASDs in adulthood, and increases with age at the time of repair (23). Atrial fibrillation or flutter may persist even after successful closure, especially when this is performed after 40 years of age (23,24).

A recent study on 235 patients undergoing Holter monitoring before procedure and at 1, 6 and 12 months of follow-up demonstrated that transcatheter closure of ASD is associated with a transient increase in supraventricular premature beats, and a small risk of conduction abnormalities and paroxysmal atrial fibrillation during early follow-up. Transcatheter closure of ASDs does not reduce the incidence of arrhythmias that appear prior to ASD closure, and larger device size and longer procedure time are possibly associated with increased risk of supraventricular arrhythmias (25). All patients with symptoms consistent with potential arrhythmias should be referred for electrophysiology assessment prior to ASD closure, and assessed with at least a 24-hour Holter ECG monitoring. If indicated, any electrophysiology study +/– ablation must be performed before device implantation as this will make access to the left atrium more complicated afterwards, although still feasible.

Historically, symptomatic children with a weight <15 kg with poor weight gain and failure to thrive were referred for surgery because devices were thought to be too large for implantation given the length of the interatrial septum. However, over the years the lower limit of weight restrictions in percutaneous device closure has decreased. Safe and effective closure in patients weighing <15 kg has been demonstrated in multiple reports and is now used routinely in high-volume institutions (26-29). Interventional ASD closure in children weighing <10 kg and even 8 kg have also been reported with good outcomes, even with extracardiac co-morbidities like bronchopulmonary dysplasia in previously premature babies (27,28). Percutaneous closure in symptomatic children can be performed in small patients without significantly increased risk (26-28). However, in a recent French nationwide study on 1326 children who underwent ASD device closure at 9 tertiary institutions, there was a minimal rate of periprocedural complications and a favourable long-term outcome, especially with no death or cardiac erosion despite a substantial proportion of large defects. However, children <15 kg and those with large ASDs had a greater risk of complication (29).

Although device closure is now the first treatment strategy for secundum ASDs, other types of ASD are referred for surgery. However it should be highlighted that interventional correction of sinus venosus ASD with partial anomalous pulmonary venous drainage has been reported with encouraging results and is likely to develop more in the near future (30).

Transcatheter closure of secundum ASD has replaced surgical closure in the vast majority of the cases. Recent advances with imaging and catheterization technique allow closure in larger defects, multiple defects, most cases with deficient rims, small patients and some other cases with complex anatomy that were previously contraindicated. However this is only supported by relatively small cohort studies. Larger studies and more follow up are mandatory to confirm such expansion of the current indications.

Conflicts of Interest: Alain Fraisse is a consultant and proctor for Abbott Inc. and Occlutech Inc. The other authors have no conflicts of interest to declare.