Is the new distribution of early esophageal adenocarcinoma stages improving the prognostic prediction of the 8 edition of the TNM staging system for esophageal cancer?

In the past, pathological staging after esophagectomy was the gold standard for the staging of esophageal tumors. Nowadays, the pathological stage is losing its clinical relevance because adjuvant therapy is gradually replacing simple esophagectomy in patients with advanced cancer (1). However, pathological staging is still closely related to the stage and prognosis of early cancer. In 2017, the latest 8th edition of the TNM staging system was released, and the previous common staging system is no longer used. The clinical, pathological and neoadjuvant pathological groups were separately staged (2,3). For pathological TNM staging, in stage I, pT1 was divided into pT1a and pT1b for subgroup analysis in both adenocarcinoma and squamous cell carcinoma. In addition, the updated pTNM staging system for esophageal adenocarcinoma also separated the original stage IA in the 7th edition (pT1N0M0 G1–2) into stage IA (pT1aN0M0 G1) and IB (pT1aN0M0 G2 and pT1bN0M0 G1–2) and the original stage IB to stage IC (pT1N0M0 G3 and pT2N0M0 G1–2).

Each update in the TNM staging system is usually accompanied by substantial skepticism. After the 7th edition of the staging system was updated for esophageal tumors, many studies proposed that the new staging system does not provide good differentiation of survival outcomes between adjacent stages (4-6). The American Joint Committee on Cancer (AJCC)/Union for International Cancer Control (UICC) subsequently makes corresponding adjustments based on the feedback. The changes in the eighth edition are also based on numerous clinical studies conducted to assess the seventh edition (7-9).

According to the 8th edition of the TNM staging system for esophageal cancer, we selected all patients with histologically diagnosed stage IA (pT1aN0M0 G1), IB (pT1aN0M0 G2 and pT1bN0M0 G1–2), and IC (pT1N0M0 G3 and pT2N0M0 G1–2) cancer from 2004 to 2014, using the 8th edition TNM staging classification system for esophageal cancer. Patients were enrolled based on the following inclusion criteria: pathologically confirmed adenocarcinoma and presence of a primary tumor. Patients were excluded if they had received neoadjuvant therapy.

Baseline data including patient information (age, race/ethnicity and sex), tumor characteristics (location, size, and histology) and surgical type were obtained from the SEER program. Outcomes evaluated in this study included overall survival (OS) and esophageal cancer-specific survival (ECSS), which were collected from the SEER database through December 31, 2014. OS and ECSS were defined as the interval from diagnosis until death from any cause and death as a result of esophageal cancer, respectively.

All continuous and categorical variables with normal distributions were analyzed for heterogeneity using one-way ANOVA with multiple comparisons post hoc test and the Chi-square test. The Kruskal-Wallis test was used in analyzing data with non-normal distribution with adjustments for multiple comparisons. Survival curves were estimated by the Kaplan-Meier method and compared with the log-rank test. Cox regression analysis was performed to calculate hazard ratios (HRs) and 95% confidence intervals (CIs). After univariate analysis, risk factors with a P value <0.1 were selected for the multivariate model. A two-sided P value <0.05 was considered statistically significant. All analyses were performed using SPSS 22.0 (SPSS, Chicago, IL, USA) and GraphPad Prism 7.0 (GraphPad Software, San Diego, CA, USA). The study was approved by the ethics committee of Nanjing Drum Tower Hospital, the affiliated hospital of Nanjing University Medical School (2017-175-01). 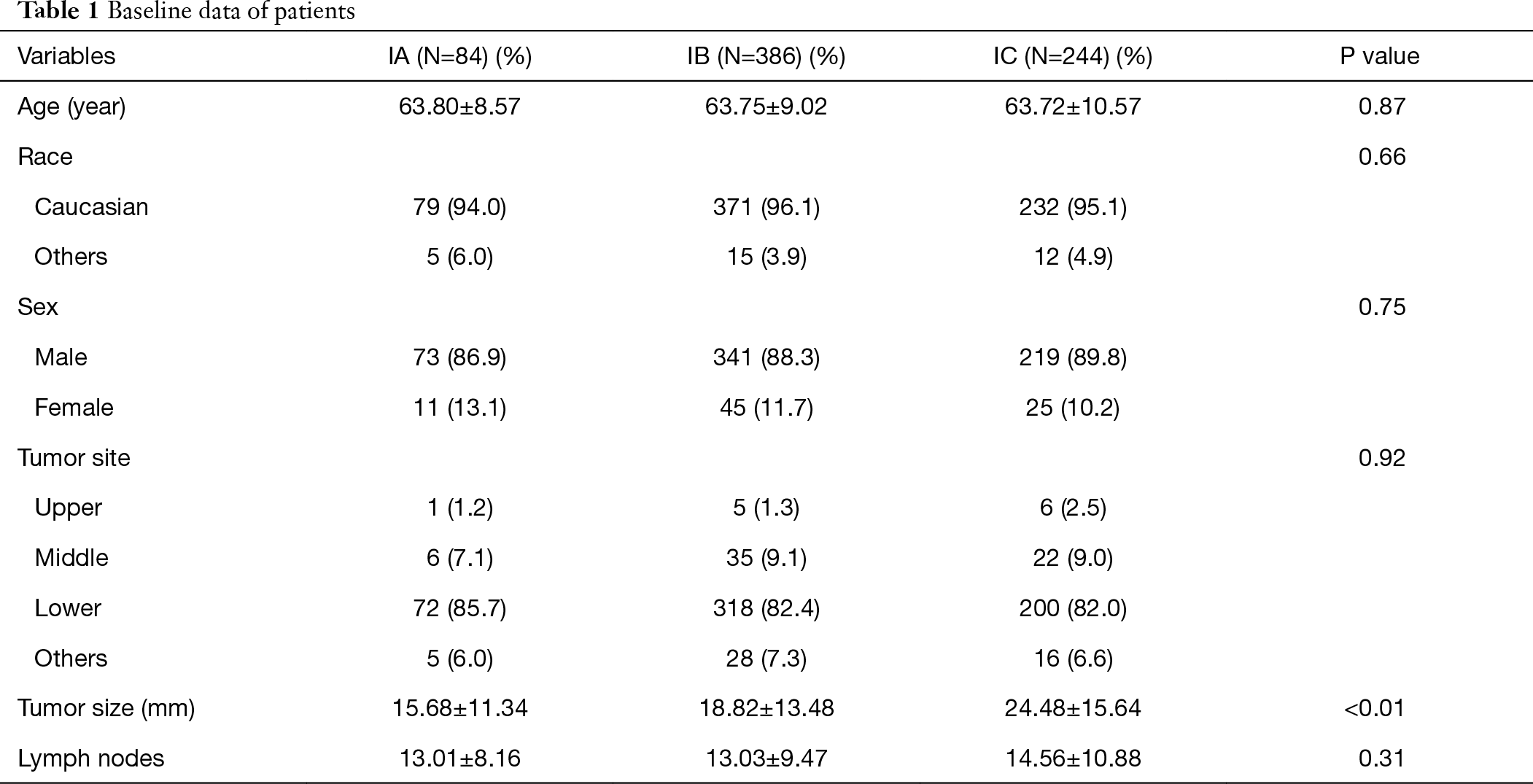 We next compared the OS and ECSS based on the two editions. The follow-up duration was 1–131 months. Two stage IA patients and 4 stage IB patients were not included in follow-up because of in-hospital deaths or insufficient follow-up time. In the 8th edition, there was no significant difference between groups IA and IB in OS (P=0.331) or ECSS (P=0.341) (Figure 1A,B). However, the survival rates of these two groups were significantly higher than those of group IC. In the 7th edition, both OS (P=0.011) and ECSS (P=0.002) rates of patients with stage IA disease were significantly higher than those of patients with stage IB disease (Figure 1C,D). 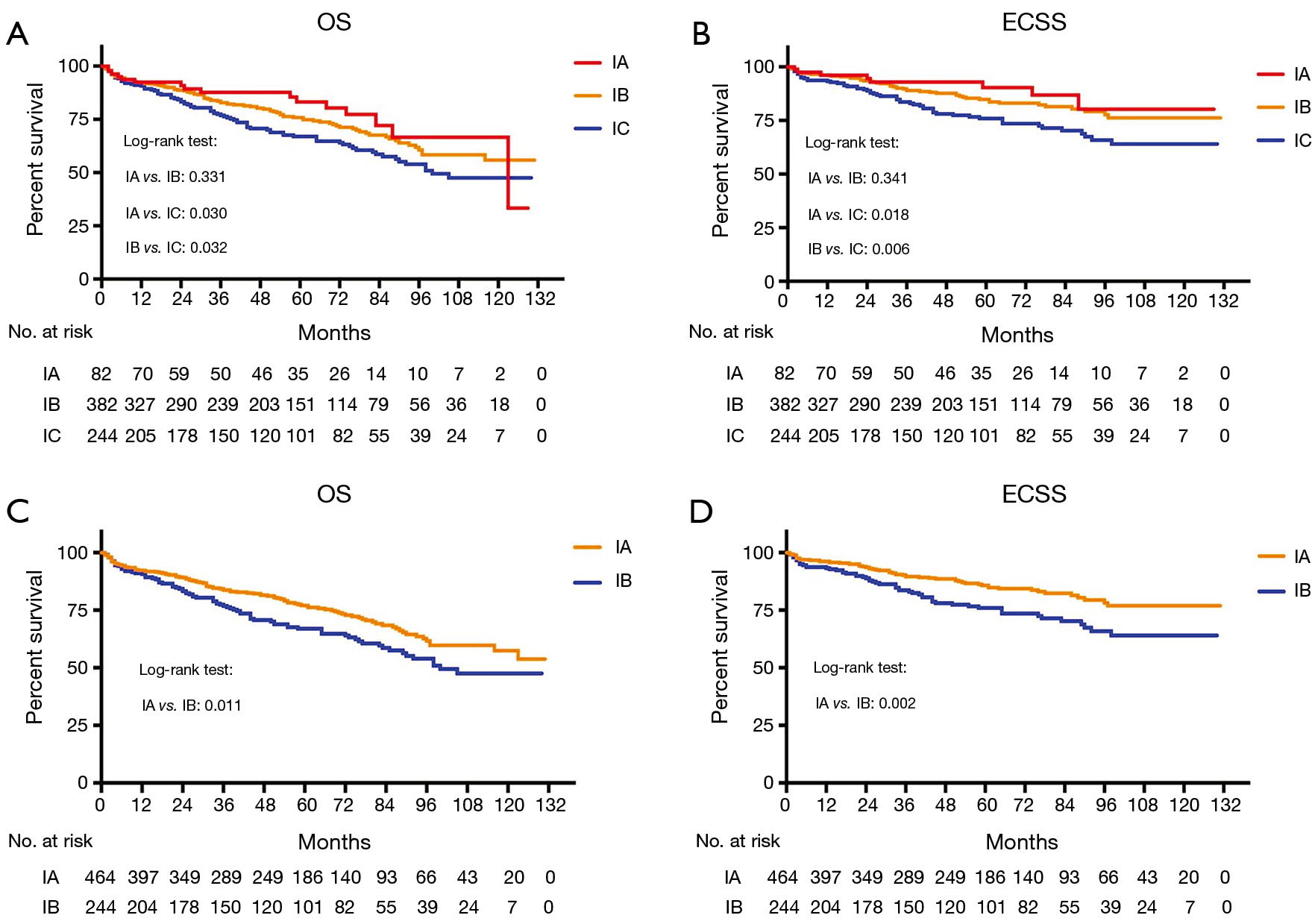 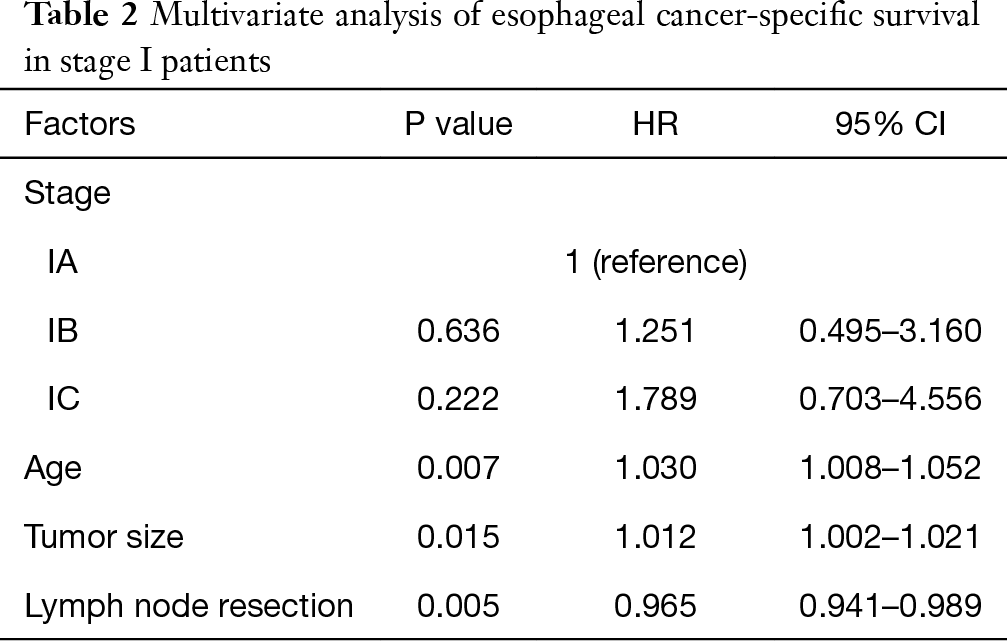 We next investigated whether there is a better method for the further refinement of stage IA tumors (T1N0M0 G1–2) in the 7th edition. To this end, we conducted further analyses on the staging system. We used two different staging methods, namely, pT1aN0M0 G1–2 vs. pT1bN0M0 G1–2 (Figure 2A,B), distinguished by the T stage, and pT1a+bN0M0 G1 vs. pT1a+bN0M0 G2, based on the degree of differentiation (Figure 2C,D). However, after separate analysis of OS and ECSS, we found no significant difference in either of the staging methods. 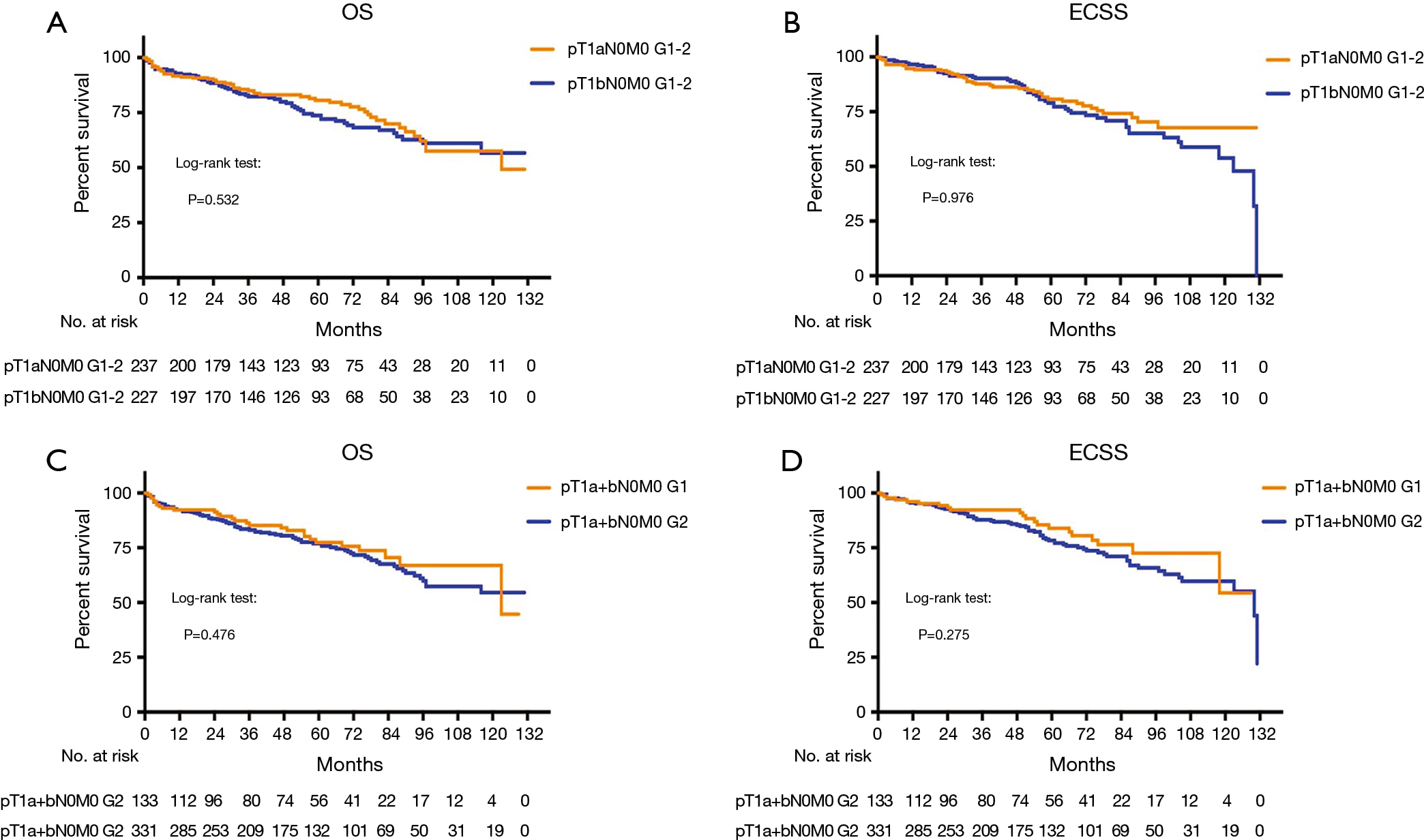 In the 8th edition of the AJCC/UICC TNM staging system for esophageal adenocarcinoma, pT1aN0M0 G1 is listed as a separate earliest stage, indicative of a favorable long-term survival rate. In contrast, pT1aN0M0 G2 and pT1bN0M0 G1–2 disease are considered to have relatively poor prognosis. This reflects the emphasis on the histological grading of early tumors. However, in the 7th edition, the histological grade had already been considered as a factor for staging—pT1N0M0 G1 esophageal squamous cell carcinoma is classified as stage IA, and pT1N0M0 G2–3 as stage IB. Nevertheless, Chen et al. (12) found no significant difference in long-term survival rates between the two patient groups. In addition, Situ et al. (13,14) conducted single-center retrospective analysis of T2N0M0 and T3N0M0 esophageal squamous cell carcinoma and found that histological grade was a prognostic factor. Kim et al. (6) analyzed gastric cardia adenocarcinoma and proposed to completely remove the histological grade from the staging system because of its lack of effect on prognosis. Similarly, histological grading is not an important aspect in Japanese esophageal cancer guidelines (15,16). Instead, these guidelines pay more attention to tumor location because of the ability of this parameter to more precisely detect the state of tumor spread (17). In our study, for patients with pT1a–bN0M0 and G1–2 esophageal adenocarcinoma, in addition to the 8th edition staging, we tried two new staging methods, namely, pT1a vs. pT1b and G1 vs. G2. Analysis of long-term survival rates revealed the lack of clear distinction between the two staging methods. These results also demonstrate that further classification of stage IA in the 7th edition may not be a good option after all.

Potential lymph node micrometastasis of early esophageal tumors may also be a risk factor for prognosis. Gertler et al. (5) proposed that the risk of lymph node metastasis differs between pT1a and pT1b tumors (1.4% vs. 20.0%), and Newton et al. (18) presented similar results (3.6% vs. 23.4%). The high metastatic risk of pT1b may also be accompanied by clinically undetectable micrometastases, which may explain the poor survival of patients with pT1b tumors. Tachibana et al. (19) reported their findings on pT1 and pT2 esophageal squamous cell carcinoma patients who were undergoing esophagectomy, and based on their results, in patients with negative lymph nodes metastasis, the cancer-specific survival rates for pT1 and pT2 tumors were similar. Similarly, in our attempted T1a vs. T1b classification, there was no significant difference in survival rates. Weksler et al. (20) constructed a new tumor risk model and found that the lack of difference in prognosis is probably because T1b patients can be further divided into two different cohorts with high and low risk of lymph node metastasis, and T1b patients with low risk of lymph node metastasis may be combined with T1a patients for the same tumor stage. However, this staging model needs further verification.

Our study aimed to detect the effectiveness of the 8th edition of the TNM staging system. Nevertheless, our study has several limitations. First, the SEER database is based on multiple centers, and we were unable obtain the appropriate details on the surgical procedure. Different surgeons and surgical methods may have a significant impact on the assessment of lymph node metastasis and disease prognosis. Second, the data were obtained over a long duration, and radiotherapy and chemotherapy strategies may have greatly changed over that period. Furthermore, our exclusion of all patients who received neoadjuvant treatment may have had an impact on the final results.

Funding: This work was supported by the National Natural Science Foundation of China (81800241).

Ethical Statement: The study was approved by the ethics committee of Nanjing Drum Tower Hospital, the affiliated hospital of Nanjing University Medical School (No. 2017-175-01).