In the current study, we aim to investigate the factors associated with GR and analysis its prognostic impact in esophageal squamous cell carcinoma (ESCC) patients with NCRT.

The ESCC patients with radical esophagectomy after NCRT at the Sun Yat-sen University Cancer Center between January 2001 to December 2006 were included. The study was a phase II study to assess the safety and efficiency of NCRT in ESCC during the period. The study was approved by the Ethics Committee of Sun Yat-sen University Cancer Center. Written informed consents were signed by the patients. Preoperative evaluation contained esophageal barium swallow, cervical ultrasonography, CT scans of the chest and upper abdomen, bronchoscope (when tumor located at the upper PR the middle thirds of the esophagus) and an upper endoscope or endoscopic ultrasonography with biopsy. Patients diagnosed locally advanced (cT2–4N0–1M0) were recommended NCRT. The chemotherapy consisted of intravenous infusion of vinorelbine (25 mg/m2 per day) on days 1, 8, 22, and 29 or 5-fluorouracil (2.4 g/m2) on days 1 to 3 and days 22 to 24, and cisplatin (75 mg/m2) on days 1 and 22. Radiotherapy was delivered 5 days a week for 4 weeks with the total dose of 40 Gy divided into a daily fraction of 2.0 Gy. Clinical restaging was performed after the completion of chemoradiotherapy. Esophagectomy and systematic lymphadenectomy were performed in 4 to 8 weeks after the NCRT. All patients received radical esophagectomy and two-field or three-field lymphadenectomy. Three-field lymphadenectomy was performed when lymph nodes in the neck were thought to be potentially positive according to the preoperative evaluation. The surgical specimens were identified by the surgeon and submitted for pathological examination. The definition of pCR is that no tumor cells were seen in the resection specimens including the primary tumor and lymph nodes resected. Near pCR defined as residual cancer less than 10 percent of the primary tumor area without lymph nodes involvement (4). Two experienced pathologists carefully reviewed all of the removed specimens. We classified the pCR and the near pCR patients as GR because of the limit patients of the study.

We suggested patients could follow up every 3 months during the first 2 years, every 6 months for the next 3 years and once a year afterwards. Medical history and physical examination, esophageal barium swallow, chest radiography, or CT from the neck to the upper abdomen were performed in the follow up. An upper gastrointestinal endoscopy or PET-CT were recommended if recurrence or metastasis were indicated. January 2017 was the last follow up time.

Statistical analysis was performed by SPSS 17.0 software (SPSS Inc., Chicago, IL, USA). The cut points of the variables were assessed by receiver operator characteristic (ROC) analysis. Univariate factors of GR were estimated by the Chi-square test. Logistic regression analysis was used to identify the significant multivariate factors of GR. The overall survival (OS) was estimated by the Kaplan-Meier method. We used the log-rank test to distinguish the difference in survival between groups. multivariate Cox regression analysis was used to assess the independent prognostic factors for O). A P value less than 0.05 was defined as statistically significant.

Forty ESCC patients with NCRT were reviewed in our study, consisting of 39 males and 1 female, with a median age of 58 years (range, 40–72 years). The clinicopathological characteristics of patients are summarized in Table 1. After surgical resection, 9 patients (22.5%) obtained pCR while 31 cases were non-pCR. Patients with pCR had a better prognosis than those with non-pCR. However, there was no statistically significantly difference between the two groups (P=0.124). Thus, we separated the patients into pCR or near pCR (GR) and poor responders (PR) based on the histology. GR showed better 5-year OS than PR (40.4% vs. 17.6%, P=0.014) (Figure 1). Univariate analysis indicated that short tumor length (P=0.027), good tumor grade (P=0.001) and never drinking (P=0.027) were associated with GR to NCRT. Using logistic regression analysis, good tumor grades were the only significant factor for the GR to NCRT (P=0.021, Table 2). Univariate analysis indicated that weight loss (P=0.002), drinking status (P=0.016), clinical N status (P=0.042) and GR (P=0.014) were prognostic factors. Multivariate Cox regression analysis revealed that weight loss (P=0.005), drinking status (P=0.044) and GR (P=0.043) were independent factors in ESCC patients with radical esophagectomy after NCRT (Table 3). 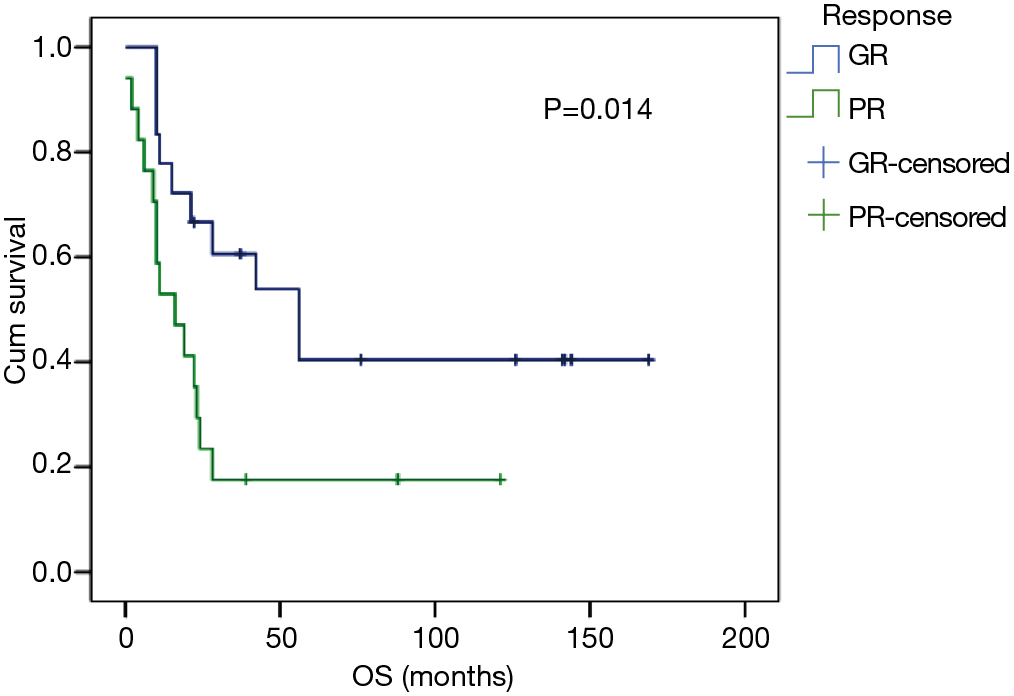 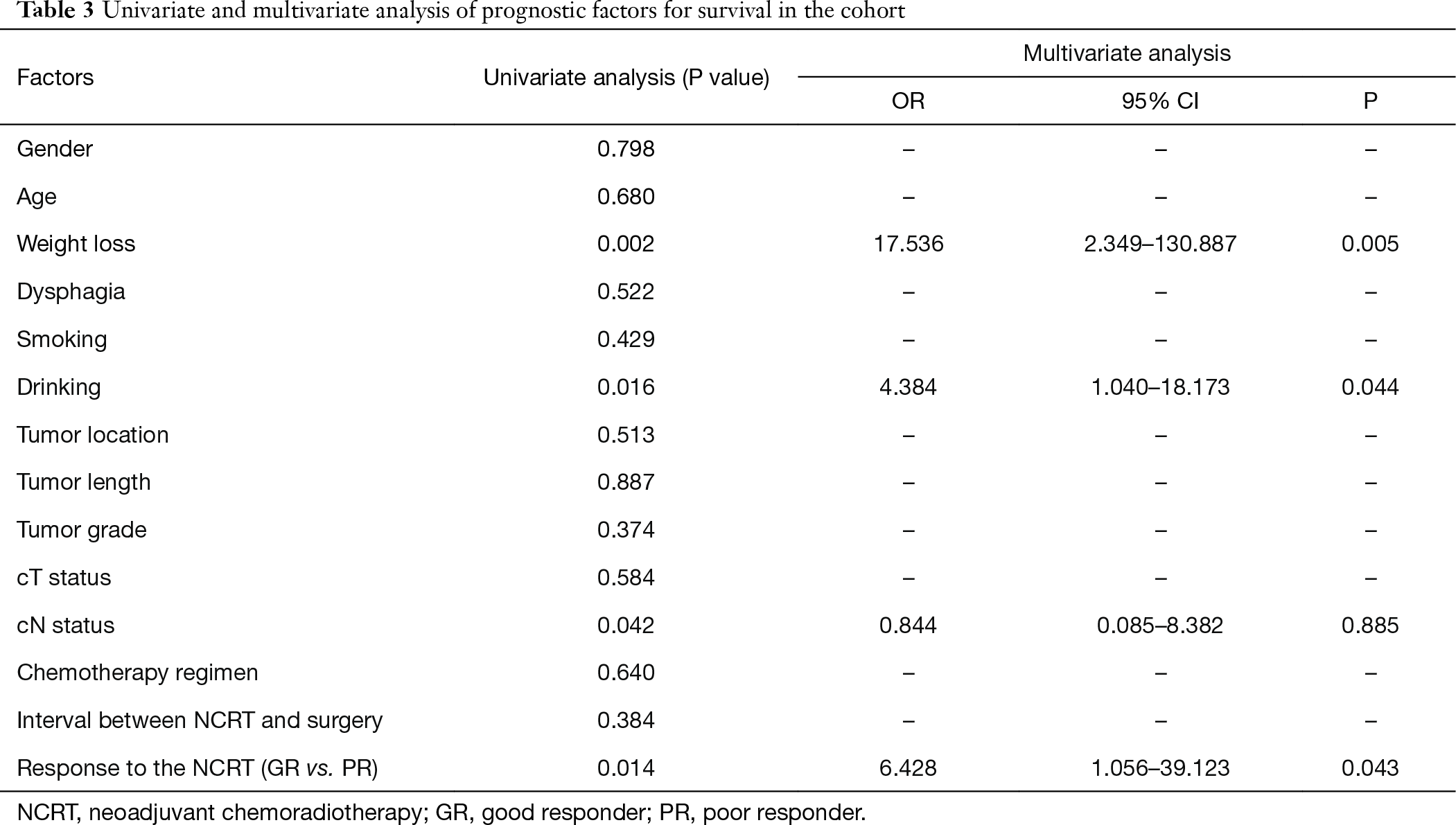 The prognosis of locally advanced esophageal cancer with surgery alone was still unsatisfied despite of the development of the preoperative diagnose and surgical technique. Therefore, the combined treatment particular to the NCRT had attract the attention of the clinician. Previous reports indicated that NCRT might downstage the primary tumor and regional lymphatic drainage to enhance radical resection rate and reduce micrometastasis, improving local control and prolonging the survival of patients (1-3). About 30% of patients receiving NCRT followed by surgery achieve pCR (1,3). It is reported that pCR following NCRT favored long term survival, whereas patients resistant to NCRT were not benefit from the multimodal therapy (3,5,6). Therefore, non-responders may obtain the side effects of NCRT, and even miss the chance to have potentially radical resection. Thus, identifying factors associated with pCR seemed to be particularly important.

Our study revealed that patients with pCR had a better prognosis than those with non-pCR. However, there was no statistically significantly difference between the two groups perhaps due to the small sample size. Thus, the study divided the patients into GRs and poor responders according to the histology. The GR patients showed a better prognosis compared with PR patients, reaching a marked difference between the two groups. In our study, we identified tumor grade were associated with GR. Drinking status, weight loss and GR are independent factors in ESCC patients receiving NCRT.

To reduce the potential biases and the confounding factors in the NCRT cases, logistic regression analysis was used to determine the significant multivariate indicators of GR among these patients. As expected, the present study indicated that tumor grade was an independent factor that affected the efficacy in the NCRT cases. Although the mechanism between the tumor grade and the GR rate was unclear, a possible explanation could be that good tumor grade of the primary tumor may indicate lower tumor burden to be a higher response rate after NCRT compared with those with poor tumor grade. Interestingly, several reports indicated that prolonging the interval between NCRT and surgery might achieve higher pCR (7,8). However, we did not find the interval between NCRT and esophagectomy was associated with GR, similar to the result of Kim and his colleagues (9). It is possible that the sample size of our study was not enough and the cutoff of the interval varied among different institutions.

In addition, our study revealed that drinking status, weight loss and GR were associated with survival in ESCC patients with NCRT. Molecular biological research indicated that alcohol and its metabolites initiated a series of epigenetic and genetic alterations, resulting in more aggressive biological features and malignance progression (10). For example, two alcohol metabolism genes, ADH1B and ALDH2, play an important role on ESCC diagnosis and tumor spread (11). Thus, there was an urgent need to develop a better understanding of the mechanisms between the alcohol use and the esophageal cancer. In addition, worse prognosis was also found among patients who lost weight before anticancer treatment, which was consistent with the finding of van der Schaaf and his colleagues (12). Although the mechanism underlying this is unclear, reduced immune function in malnutritional patients might be associated with a reduced chance of survival. Furthermore, GR, more sensitive to the NCRT, reduced an aggressive behavior and had an improved OS compared with those who had poor response to the NCRT. Moreover, the findings above need to be further confirmed in a large cohort.

Assessment of tumor response to NCRT can help to estimate the prognosis of the patients and provide information on selecting the patients who will benefit from NCRT. EUS is a useful tool for diagnosing staging; however, it is difficult to distinguish the residual cancer or the inflammatory tissue and fibrosis after NCRT (13). Novel technologies are needed to identify those with a pCR. But imaging methods such as PET-CT following NCRT for esophageal cancer was also not accurate enough to identify patients with pathological response for clinical application (13). Recently, concerns about molecular markers related to the treatment response have been raised by the clinicians and researchers (14,15). However, the clinical application of the markers is not widely available and their clinical relevance needs to be further validated.

However, our study was a retrospective study and the sample size was small. Although more than 1,000 patients underwent esophagectomy in our department during the period of the study, few cases received NCRT due to the lack of uniform clinical standards in China. Furthermore, our results were from a single center and whether the findings were applicable to other institutions needed to be confirmed. Therefore, larger sample prospective studies are needed for verification.

In conclusion, our study indicated that good tumor grades were the only significant factor for the GR to NCRT. Weight loss, drinking status and GR were independent factors in patients with radical esophagectomy after NCRT. GR may improve OS of ESCC patients receiving NCRT.

We thank the members of Guangdong Esophageal Cancer Institute for their cooperation and assistance.

Ethical Statement: The study was approved by the ethics committee of Sun Yat-sen University Cancer Center (YP2007031) and written informed consent was obtained from all patients.