Esophageal squamous cell carcinoma (ESCC) remains a poorly prognostic tumor despite significant advances in surgical techniques and cancer treatment (1). According to the data from complete resection of esophageal carcinoma, 81.4% patients with T3 stage have regional lymph node metastases (2) and 20.5% patients suffer from regional lymph node recurrence after surgery due to rapid progression and lymphatic metastasis (3). A better understanding of the molecular events in lymphatic metastases is the key to improve survival prediction and design more effective therapies for ESCC.

A previous study showed over-expression of inhibitor of differentiation or DNA binding 1 (Id-1) in primary tumor (PT) of ESCC is associated with metastasis and suggested that Id-1 may be used for prognostication (4). Id-1 belongs to a protein family which contains a helix-loop-helix (HLH) motif through that it inhibits the basic HLH transcription factors from DNA binding, therefore regulating gene transcription (5). It has been implicated in different steps in carcinogenesis such as tumorigenesis, differentiation and metastasis (6,7). In ESCC vitro experiments, ectopic Id-1 expression altered the expression levels of markers associated with epithelial-mesenchymal transition (EMT) and the migration ability of esophageal cancer cells, such as E-cadherin, β-Catenin and matrix metalloproteinases (MMPs) (8).

However, the Id-1 proteins alterations related to clinical outcomes have not been adequately studied in patients with ESCC. Particularly, functions of Id-1 protein are always analyzed in the PT so far. It provokes an interest to study whether Id-1 play a similar role in metastatic lymph nodes. Therefore, the purposes of our study were to verify possible changes in Id-1 expression between PT and paired metastatic lymph nodes (PMLN) and analyze their correlation with clinical parameters. In order to avoid the bias effect of tumor invasion, the cases in our study were patients with stage T3 ESCC and their prognoses associated with Id-1 expression were also studied.

Two hundred eighty-eight consecutive patients with stage T3N1-3M0 ESCC were included in the study. All patients underwent radical esophagectomy from June 1997 to December 2004 at the Department of Thoracic surgery, Sun Yat-sen University Cancer Center (SYUCC). Inclusion criteria are as follows: thoracic ESCC with histopathological proof, T3N1-3M0 pathological stage according the 8th edition AJCC TNM staging system (9), complete surgical resection (R0), and complete follow-up data. The exclusion criteria are as follows: patients with the history of other cancer or death of perioperative period, received neoadjuvant treatment. All patients signed the ethical agreement at the time of their operation according the ethics approval obtained from the IRB committee of the Cancer Center of Sun Yat-sen University.

In our study 288 consecutive patients with thoracic ESCC were included. The samples of 3,720 lymph node and 288 primary lesion were obtained. All the samples were collected immediately after radical esophagectomy and routinely fixed in 10% neutral buffered formalin at room temperature for 24 hours. Then all samples were dehydrated, incubated in xylene, infiltrated with paraffin, and embedded in paraffin finally. Two trained pathologists from pathology department of SYUCC independently selected all metastatic lymph nodes according to the following criteria: histopathological proof of squamous cell carcinoma, the diameters of metastasis lesion over 3 mm in lymph nodes. Consequently, 164 pairs samples of PT and corresponding metastatic lymph nodes were selected. Of them, 42 patients had over one metastasis lymph nodes and were randomly selected one metastatic lymph node for each patient.

The ESCC tissue microarray was constructed according to the method reported previously (10) and with a Beecher Instruments tissue microarrayer (Beecher Instruments, Sun Prairie, WI, USA). The pathologists marked the areas containing viable tumor were marked on the paraffin wax tissue blocks independently. Three 1-mm tissue cores from marked areas of the same tissue block were selected for each case (10) and transferred to a TMA. Then the pathologists checked the TMA block to ensure the adequate targeted tissues included with the method of Haematoxylin-eosin-stained section.

For IHC analysis, IHC staining was performed on 4 µm sections obtained from tissue microarray blocks. According to the manufacturer’s recommendations, Polyclonal anti-Id-1 antibody (Maxim, Fuzhou, China) was carried out at a 1:100 dilution and incubated at 4 °C for overnight. Using the EliVisonTM plus (Mouse/Rabbit) IHC Kit (Maxim, Fuzhou, China) immunoperoxidase staining was applied. At room temperature, the slides staining were incubated with polymer enhancer and the same secondary antibody for 15 and 30 minutes respectively. During each incubation interval, slides were washed in PBS. Nonimmune rabbit immunoglobulin G was used as negative controls. Finally, 122 cases with PT and PMLN were included in this study. Forty-two cases were excluded because the PT and metastatic lymph nodes could not be paired due to technological issues.

The stained sections of all cases were scored by two trained pathologists independently at first, and then reviewed together. For evaluating ID1 expression, we calculated a score including intensity (I) and proportion (Prop) of Id-1 cytoplasmic staining. The staining intensity was defined as following: no =1, weak =2, moderate =3, strong =4. The staining proportion was the the percentage of positive expression in at least 200 tumor cells (11). A score was calculated as I × Prop. The average score of three tissue cores was the expression score of each case.

For statistical analysis, we used the SPSS 16.0 software system in the study. Chi-square test or Fisher’s exact test were used to analyze the differences of dichotomous parameters. Differences of the average expression scores of IHC for intra-patient were evaluated by A Wilcoxon signed-rank paired test. The log10 of ratio between PT and PMLN was calculated for graphical representations. In PMLN, less or more than 0 of log10 (ratio) indicates a higher or lower level expression, respectively.

To determine the threshold value for Id-1 expression, receiver operative characteristic (ROC) curves were performed (12,13). The cut-off score (criterion value) for each parameter showed the maximization in sensitivity and specificity for the survival results which was closest to 0.0, 1.0 on ROC curves. The data of overall survival was calculated from the time of surgery to the time of death or last follow-up which was censored. The Kaplan-Meier method and log-rank test were performed to calculate and analyze the survival curves respectively. A P value less than 0.05 was defined as statistically significant in a two-tailed test.

The clinical and pathological characteristics were shown in Table 1. According to the 8th edition AJCC staging system (9) and previous prognostic factors analysis, the clinicopathologic features were dichotomized for statistical analyses. Therefore, 82 of 122 tumors (67.2%) were from upper and middle esophagus, and 40 tumors were from lower esophagus. Twenty-eight of 122 tumors (23.0%) were grade 1, and the remaining tumors were grade 2 or 3. Sixty-four patients (52.5%) had regional LN metastases involving 1 to 2 nodes, and 58 patients had more than 3 nodes involved. Sixty-five patients (53.3%) were with a ratio of involved to examined LNs ≤0.2 and 57 patients (46.7%) were >0.2. Seven patients received postoperative radiotherapy and 10 patients received adjuvant chemotherapy. The median survival was 19 months (range from 3 to 123 months). 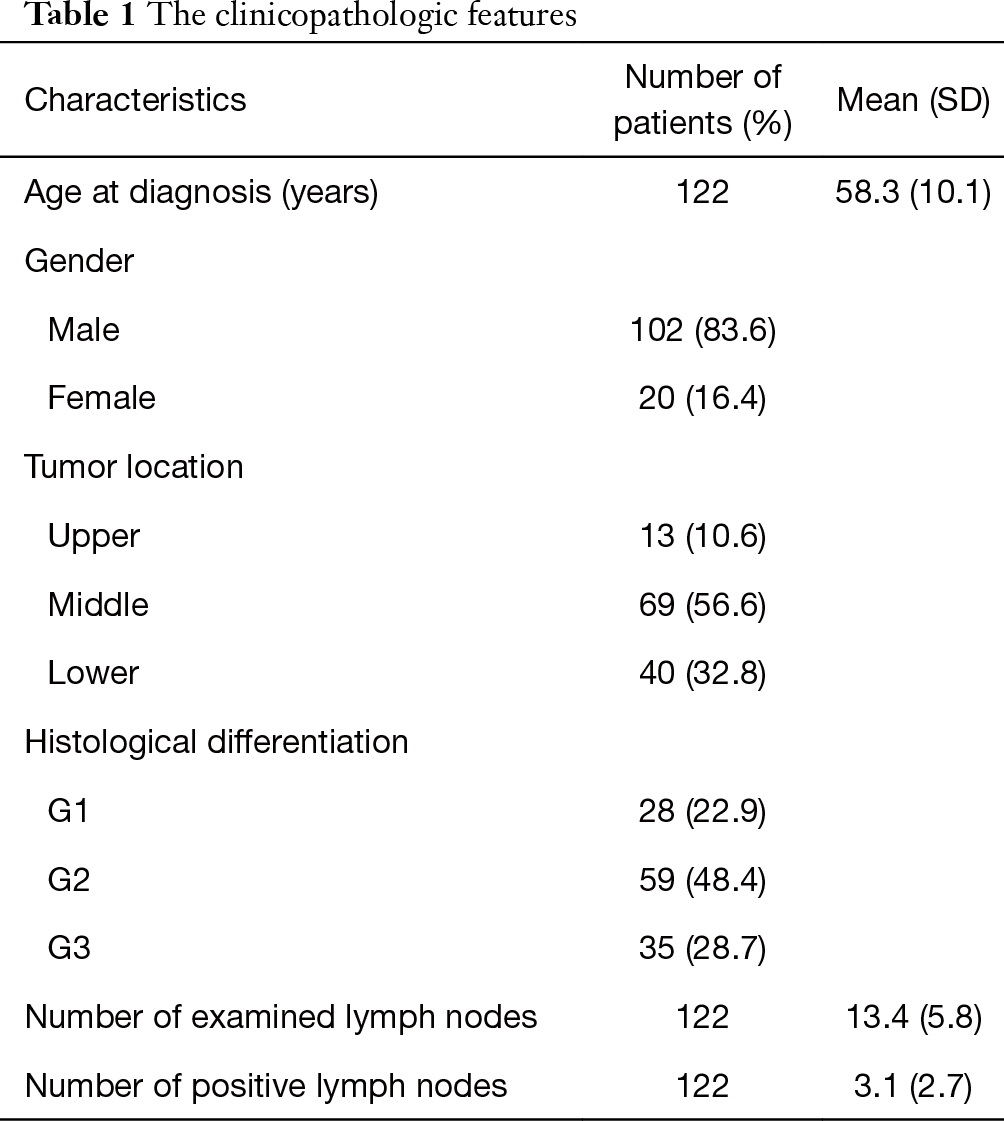 In Figure 1, the comparative feature of IHC are depicted. All PT of ESCC showed positive expression, while 43.4% (53 out of 122) of PMLN specimens showed positive expression. As shown in Figure 2, log10 (ratio) in majority of the cases was more than 0. In individual patient comparison, the level of Id-1 expression in PMLN was down-regulated compared with PT (Wilcoxon signed-rank test, P<0.001). According to the cut-off scores on ROC curves as shown in Figure 3, Id-1 expressions in PT (≤ or >116.667) and PMLN (≤ or >13.333) were divided into low expression or high expression group. 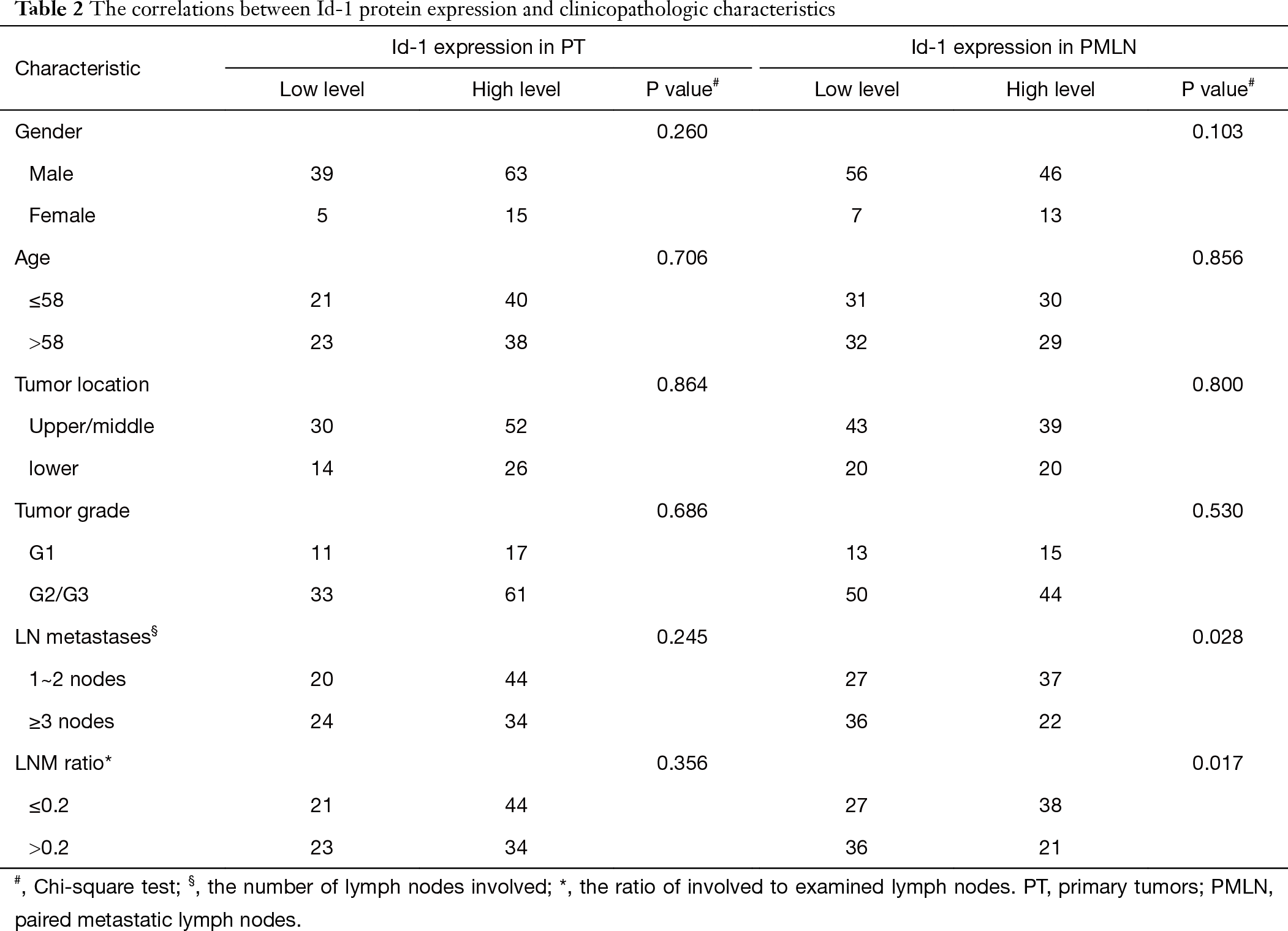 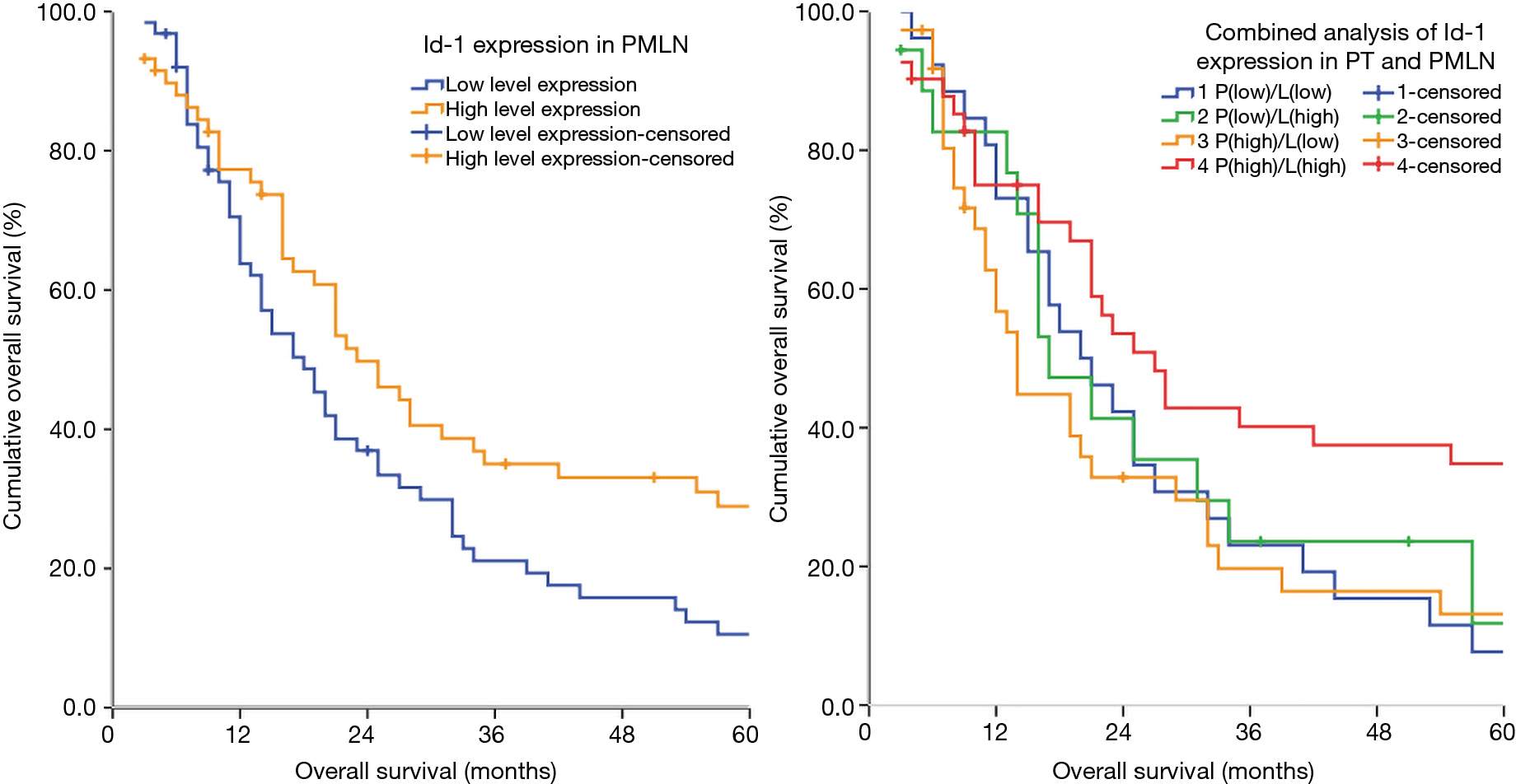 As the potential use of tumor marker, Id-1 protein explored by previous studies has revealed that it plays different roles in tumor progression, metastasis and prognosis in some cancer types, such as cervical, breast, prostate and pancreas cancer (14-17). According to the above studies, over-expression of Id-1 is associated with decreased survival and enhanced malignant potential. Thus, we aimed to investigate whether these roles could be involved in the lymphatic metastasis of ESCC in this study.

However, the pattern of Id-1 expression in lymphatic metastasis was differential compared with the PT. In the present study, the majority of PT expressed Id-1 with cytoplasmic stained, while only 43.4% of metastatic tumor cells expressed concordantly. As the graphical representations shown in Figure 2, it indicated that the expression of ID1 in PMLN has a decreasing trend. The study outcomes showed the level of Id-1 expression in PMLN was down-regulated compared with PT (P<0.001). Significant genetic changes occur in a small fraction of cells of the PT, and these changes lead to the occurrence of metastases (18,19). The hypothesis speculates that PT and metastases may be biologically heterogeneous. We reported that CyclinD1, p53, E-cadherin and VEGF discordant expression occurred between the PT and its PMLN in over 25% patients with ESCC (20). Besides, some studies mentioned that other biomarkers expression in ESCC metastatic lesions was differential, such as MMP-9, CD44, and CD44V6 (21,22).

Regarding the pattern of biomarkers expression in metastatic lesions, some studies have reported controversial conclusions. Italiano et al. (23) reported different EGFR expression between PT and metastases in 33% patients with lung cancer. Another study showed that the discordant expression of EGFR, VEGFR, ERCC1 and Ki-67 occurred in about 30% of patients (10). On the other hand, contradictory conclusion was observed in breast and colon cancer, such as the expressions of c-erbB2, p53 and EGFR (24-26). Regardless, our results gave a novel finding that the level of Id-1 protein expression transformed in the PMLN in our cohort.

In the analysis of correlation between Id-1 protein alteration and clinicopathological features, we found that there was no significant association between the level of Id-1 expression in PT and clinical outcomes. It was not consistent with some previous study. Yuen et al. (4) reported that over-expression of Id-1 in PT was associated with distant metastasis within 1 year after surgery. As the aforementioned report on ESCC, Id-1 was considered as a predictor related to poorer outcome. However, it was not mentioned previously that Id-1 expression in metastases of ESCC may have a differential prognosis value.

In addition, Id-1 protein expression in PMLN was a differential prognostic factor in our ESCC cohort. Overall survival in patients with high level Id-1 expression in PMLN was significantly longer than that with low level expression in our cohort (P=0.015). It is inconsistent with previous investigations which propose Id-1 over-expression as a potential biomarker forecasting poor outcome in other cancers (15,32,33). Moreover, the prognosis of patients with high level Id-1 expression both in PT and PMLN was better than those of other subgroups (P=0.035). However, Id-1 expression in PT was not associated with survival in our cohort. Combined analysis of Id-1 expressions in PT and PMLN was effective to predict survival. These results implied that the changing level of Id-1 expression in metastasis of ESCC may play some role during the tumor progression as not reported previously. Consequently, understanding biological mechanism about Id-1 in the metastases of ESCC may provide a new strategy to decrease metastasis and improve survival.

In conclusion, we revealed a novel phenomenon that the level of Id-1 protein expression was down-regulated from PT to PMLN in our study. Furthermore, strong expression of Id-1 in metastatic lymph nodes predicted better overall survival in patients with stage T3N1-3M0 ESCC.

The authors thank Ms. Miao-Qing Lin for patients’ follow-up and Maxim Ltd. for their technical assistance.

Ethical Statement: All patients signed the ethical agreement at the time of their operation according the ethics approval obtained from the IRB committee of the Cancer Center of Sun Yat-sen University.