Our study included 71 consecutive patients diagnosed with ASS-associated ILD between December 2010 and May 2016 at our hospital. These patients were carried out routine examination of ACPA. Of those, we selected 7 consecutive patients diagnosed as having ILD associated with ACPA-positive ASS. This retrospective cohort study was approved by the institutional review board of Kanagawa Cardiovascular and Respiratory Center (KCRC-17-0014). Because of the retrospective nature of the study, the review board waived the need for written informed consent from the patients.

Baseline clinical measurements were obtained within 3 months of the initial diagnosis of ILD. ACPA was tested using chemiluminescent enzyme immunoassay testing of sera (BML Inc., Japan). A positive result for ACPA was defined as a measurement greater than 4.5 U/mL. For anti-ARS antibodies (anti-Jo-1, EJ, PL-7, PL-12, OJ, and KS antibodies), routine conserved serum of each patient at the diagnosis of ILD in Kanagawa Cardiovascular and Respiratory Center was measured by RNA immunoprecipitation and protein immunoprecipitation assays at Tokai University School of Medicine, Japan. ASS patients were defined as having one of the ARS antibodies with ILD. Two experienced thoracic radiologists (T Iwasawa and S Iso) reviewed all high-resolution computed tomography (HRCT) scans for consensus of diagnosis of ILD in our hospital without knowledge of the patients’ clinical data. The HRCT pattern was based on the previous guidelines (15). Findings inconsistent with the usual interstitial pneumonia (UIP) pattern were classified into nonspecific interstitial pneumonia (NSIP), organizing pneumonia (OP), and NSIP with OP overlap (NSIP + OP) according to previous reports (16,17). NSIP + OP was identified when consolidations were superimposed on a background of ground-glass opacity (GGO) with or without reticulations or traction bronchiectasis (16). HRCT findings were analyzed from each of the characteristic viewpoints of ACPA-positive ILD (i.e., honeycombing, centrilobular nodules, bronchial wall thickening, and expiratory air trapping) and ILD associated with ASS (i.e., lower lung volume loss and lower lung predominance) referring to previous reports (9,10,16,18,19). These HRCT findings were interpreted according to the recommendations of the Fleischner Society (20). Disagreements between the two radiologists after the initial assessment were resolved by discussion. Surgical lung biopsy specimens were available from 3 patients and were reviewed by two pulmonary pathologists (K Okudela and T Takemura) who were blinded to the patients’ clinical and radiologic information. Histologic patterns were classified according to the classification of idiopathic interstitial pneumonia (17,21). Disagreements between the two pathologists were discussed until consensus was reached. Treatment responses as measured by pulmonary function tests are presented as the percentage change of the initial value. Improved and Worsened were defined as >10% positive or negative changes, respectively, in forced vital capacity (FVC) or >15% in %diffusing capacity of the lung for carbon monoxide (%DLCO) (22). Patients who did not meet the criteria for consideration as Improved or Worsened were considered Stable. 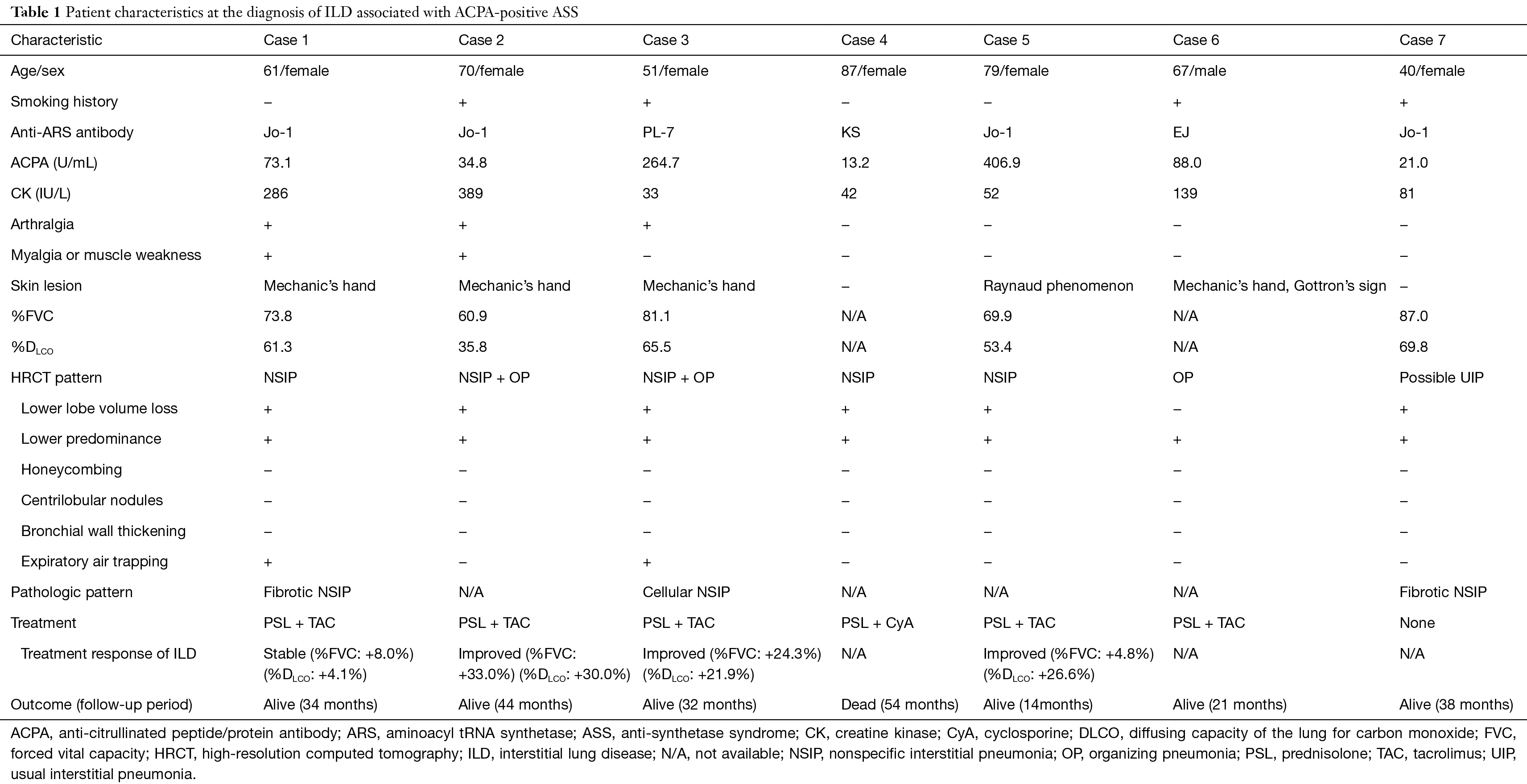 HRCT in 5 patients (71.4%) revealed GGO or consolidation along the bronchovascular bundles, which indicated NSIP in 3 patients (cases 1, 4, 5) and NSIP + OP in 2 patients (cases 2, 3) (left panel in Figure 1A,B,C,D,E). Coronal slices from these 5 patients showed lower lung predominance and major fissures being dragged caudally due to lower lobe volume loss (right panel in Figure 1A,B,C,D,E). In addition, the HRCT pattern included OP in 1 patient (case 6) (Figure 1F) and possible UIP in the other patient (case 7) (Figure 1G). The pathological findings in 3 cases resulted in a diagnosis of fibrotic NSIP in 2 patients (cases 1, 7) and cellular NSIP in 1 patient (case 3) (Figure 2). Additionally, lymphoid follicles with cellular infiltration were also seen in 2 cases (case 3, 7). With regard to airway disease, cellular bronchiolitis were seen with NSIP in 1 patient (case 3). 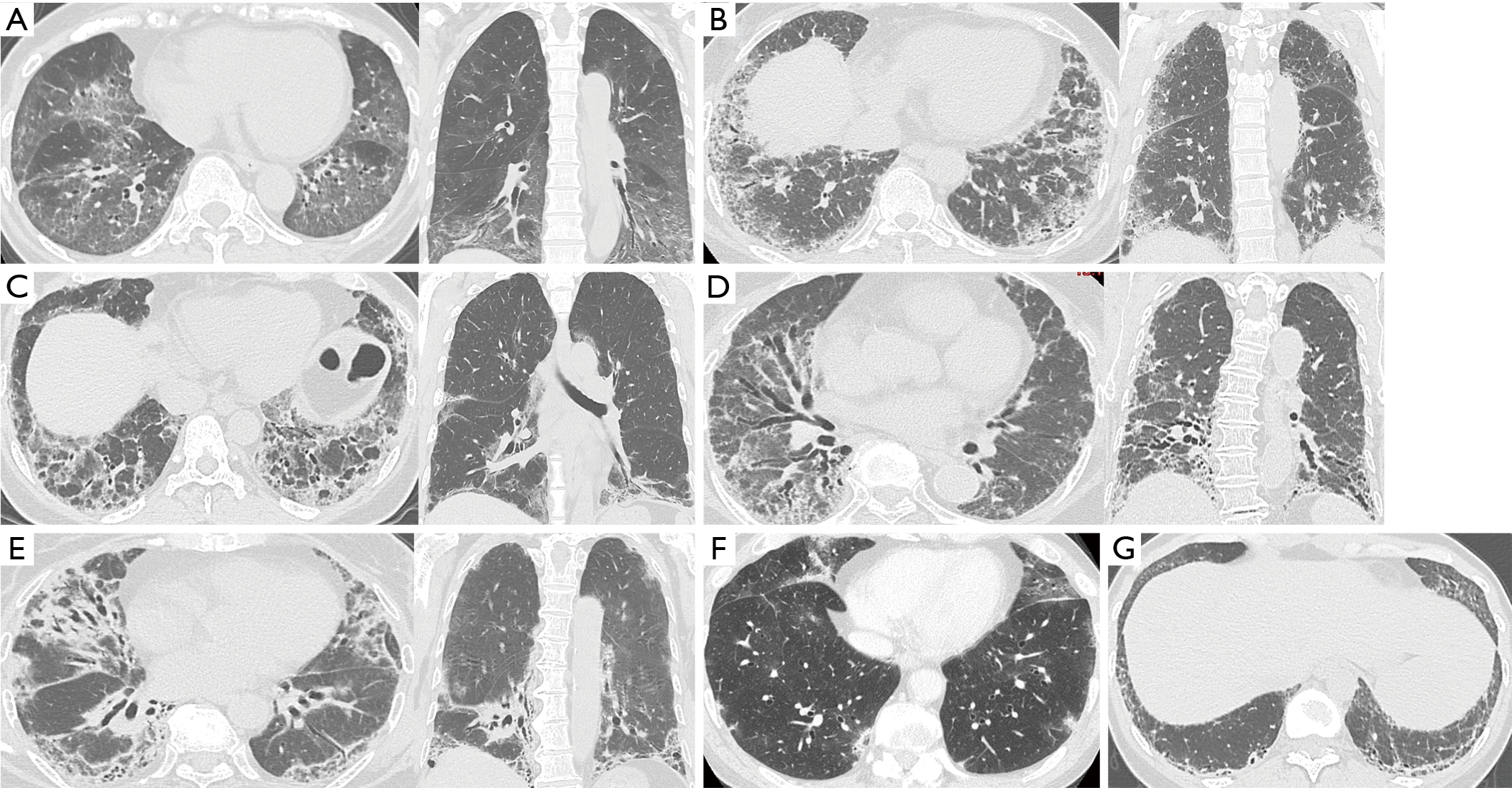 Six (85.7%) of the patients with ILD associated with ACPA-positive ASS received anti-inflammatory drugs (prednisolone + cyclosporine or tacrolimus) within 3 months after the ILD diagnosis, and the other patient (case 7) was carefully observed. After starting therapy, muscle or joint symptoms of ASS other than ILD improved in all 3 patients. In addition, no one developed these symptoms during follow-up period. All 6 patients who received anti-inflammatory therapy showed radiological improvement of their ILD. Of the 4 patients with available pulmonary function test results during follow-up, treatment responses resulted in 3 patients being considered Improved and 1 patient being considered stable. The median follow-up period was 34 months (range, 14–56 months), during which only 1 patient (case 4) died due to chronic mild progressive ILD and old age (Table 1).

The clinical symptoms of some of the ACPA-positive ASS patients included severe arthritis, but those patients with myositis showed a good treatment response (27,28). If the patient have arthralgia or arthritis, these symptoms are hard to decide if it is either RA or ASS (28). Meyer et al. reported that approximately 40% of ACPA-positive ASS patients were still under prednisolone treatment at a dosage ≥10 mg/day (mean follow-up, 93.19 months) (28). None of our 3 patients (case 1–3) experienced a relapse of arthralgia under prednisolone (≤10 mg/day) during the follow-up period. Although only a few cases were analyzed, combined therapy with tacrolimus as a calcineurin inhibitor might also be effective. The reported treatment response of ILD of most patients, whether those with NSIP (including NSIP + OP) in association with ASS or CTD (e.g., RA, PM/DM) was often good as in our patients (16,21,29).

Recent guidelines recommend serologic evaluations such as rheumatoid factor, ACPA, and anti-nuclear antibody in ILD, even in the absence of signs or symptoms of CTD, provided that more specific antibodies such as anti-ARS antibodies are evaluated in select cases because of unclear diagnostic value of the other evaluations and to improve cost effectiveness (15). However, anti-TNF agents for RA may even trigger myositis and/or ILD in ASS and lead to refractory arthritis (27,30). In other words, RA therapy may lead to harmful events (including ILD) in patients diagnosed as having RA when the patient’s ILD is associated with ACPA-positive ASS. Therefore, we may perform serologic tests for anti-ARS antibodies in ILD patients even if they are positive for ACPA. Particularly, special care should be taken when assessing patients with a radiological ILD pattern of ASS rather than RA or ACPA, as described above.

Our results need to be interpreted with caution due to the following limitations. First, this was a retrospective, the sample size was small, and some clinical and pathological findings were not available. Second, since ILD became the reason why our patient was diagnosed as ACPA-positive ASS, this study was viewed from respiratory physicians, not rheumatologists. However, if the patients have autoantibodies related to CTD, we usually consult the rheumatologists to determine whether the diagnosis of CTD can be fulfilled. Third, there was selection bias because not all of the patients with ILD were evaluated for ACPA or anti-ARS antibodies, there was selection bias. However, the chest clinicians in our center carry out screening while always keeping routine examination of each antibody in mind, even if the patients with ILD have no symptoms suspicious of CTD. Therefore, we could collect rare cases of ILD associated with ACPA-positive ASS.

We sincerely thank Ms. Etsuko Iwata and Ms. Miyako Nakagawa of Tokai University School of Medicine for their contribution in detecting the anti-aminoacyl tRNA synthetase antibodies. The authors would like to thank Rise Japan LLC for the professional English language review.

Conflicts of Interest: All work was performed at the Kanagawa Cardiovascular and Respiratory Center. The authors have no conflicts of interest to declare.