Sinobronchial syndrome (SBS) is a disease involving chronic upper and lower airway inflammation caused by a decline in bronchial mucociliary transport or mucosal immunity. This article describes a case of refractory SBS that progressed despite macrolide therapy, and discusses the possible causes of the intractable nature of the disease.

A 73-year-old man complained of productive cough and visited the authors’ hospital. Although the patient was healthy in childhood, he had a history of operations for sinusitis in his sixth decade of life. He had been smoking one pack per day till the age of 30 years, after which he stopped smoking. At the initial visit, no rales were heard on auscultation and chest radiography revealed no abnormalities (Figure 1A). However, sinus radiography revealed a decrease in permeability of the maxillary sinus; consequently, he was treated with a low-dose macrolide [clarithromycin (200 mg/day)]. Nevertheless, his productive cough persisted. He also developed effort dyspnea and rhonchi were observed on auscultation. One year after treatment initiation, chest radiography revealed fine nodular shadows in the bilateral lower lung fields. Chest computed tomography (CT) revealed diffuse small nodules in the bilateral lower lobes (Figure 1B). His lung function had deteriorated since his first visit and demonstrated mixed ventilator impairment (%vital capacity =78.6%, forced expiratory volume% =65.8%). A blood examination revealed signs of minor inflammation (white blood cells, 8,530/µL and neutrophils 81%; C-reactive protein level, 1.08 mg/dL). Cold agglutinin levels were in the normal range. A blood gas analysis revealed hypoxemia (PaO2, 63.4 Torr). The disease progressed and developed into diffuse panbronchiolitis (DPB) despite treatment with low-dose macrolide. After obtaining informed written consent, a bronchoscopy was performed for work up. Bronchoalveolar lavage revealed an increased neutrophil ratio in the bronchial segment. P. aeruginosa was isolated from a bronchoalveolar lavage fluid culture. Bronchial epithelial specimens were obtained and the ultrastructure of the bronchial epithelial cilia was observed using transmission electron microscopy (Figure 2). The patient’s inner dynein arms were defective on the large part of cilia; in contrast, the outer dynein arms were intact. The nasal clearance time according to saccharin test was prolonged [46 min (normal range ≤15 min)]. It was speculated that ciliary dysfunction could explain treatment resistance. Clarithromycin was replaced with another macrolide, erythromycin, and an inhaled bronchodilator (long-acting agonist and long-acting muscarinic antagonist combination drug) was added. Although the disease course did not improve, it did stabilize. 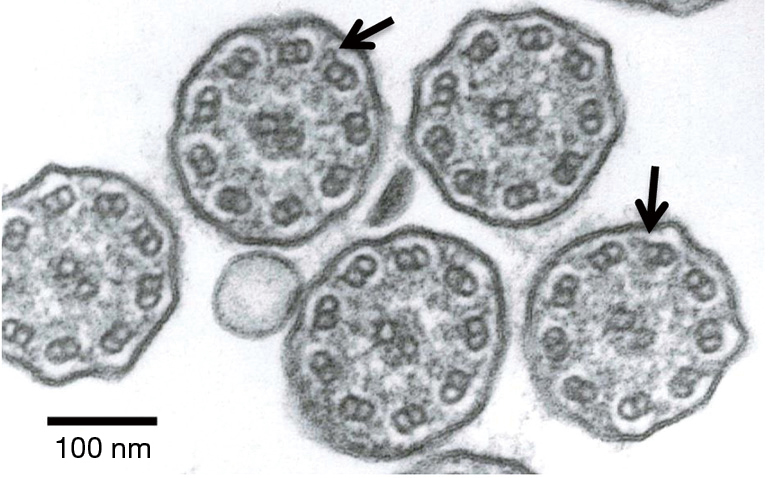 SBS is a comorbid disease accompanied by chronic upper and lower airway inflammation (1). SBS includes not only mild cases of complicated sinusitis and bronchitis accompanied by productive cough, but also severe diseases such as primary ciliary dyskinesia (PCD), DPB, immune globulin deficiency or hypo-immunoglobulinemia, and cystic fibrosis (1,2). This particular case presented only with productive cough and coexisting sinusitis at the initial visit, which became progressively worse despite macrolide treatment, ultimately progressing to DPB. It was probable that inner dynein arm defects led to reduced bronchial clearance and caused refractory disease.

Ciliary activity without inner dynein arms is slightly decreased compared with that of normal cilia, but is increased compared with that of cilia without outer dynein arms, or without both outer and inner dynein arms (3). Cilia with an isolated inner dynein arm defect are observed to have a highly abnormal, stiff forward power stroke with markedly reduced amplitude (4). However, it is acknowledged that inner dynein arms are more difficult to observe due to decreased repeats along the ciliary axoneme compared with the outer dynein arms (5). Some studies (6,7) have emphasized the difficulty of demonstrating the absence of inner dynein arms due to the low contrast of these structures on electron microscopy (8). PCD is a congenital disorder of the respiratory cilia characterized by abnormal motility generally related to ultrastructural ciliary defects responsible for impaired mucociliary transport (8). However, patients with suspected PCD due to an inner dynein arm defect should have the diagnosis reassessed if it has been based on only one diagnostic sample (5). From these perspectives, our patient should undergo re-testing of his ciliary ultrastructure. Despite treatment, however, his symptoms and abnormalities on chest imaging did not improve; it was believed that his bronchial disorder had persisted. Conjecture based on details of this case suggests that a defect in the inner dynein arms caused a minimal disturbance of ciliary chronic bronchial inflammation developing at an older age compared with common PCD cases.

Low-dose, long-term macrolide therapy has been widely used for DPB since the study by Kudoh et al. (9), and has generally demonstrated satisfactory efficacy for DPB. Recently, it was reported to be effective against chronic sinusitis (10), cystic fibrosis (11), and non-cystic fibrosis bronchiectasis (12,13). agonists increase ciliary bend amplitude and ciliary beating frequency (14). Muscarinic antagonists have been reported to be effective in reducing bronchial secretions (15,16). In this case, the combination of erythromycin and long-acting agonist/long-acting muscarinic antagonist inhalation did not improve the disease symptoms, but did stop its progression.