Advances in diagnostic techniques have led to an increased incidence of bilateral synchronous multiple primary lung adenocarcinoma (BSMPLA). However, the simultaneous discovery of multiple bilateral pulmonary tumors raises questions regarding whether the lesions represent multiple primary diseases or intrapulmonary metastases. Currently, the diagnostic criteria of BSMPLA are based on histological type, computed tomography (CT) imaging features, tumor location, and clinical manifestations, and no guideline has addressed treatment recommendations for patients with BSMPLA. Additionally, only a few reports have described surgical procedures for multiple lung cancers (1-3). Accordingly, the most suitable treatment strategy for BSMPLA is decided on a case-by-case basis. In this report, we describe our experience which we hope to establish optimal therapeutic options for patients with BSMPLA.

This study was approved by the Ethics Committee of the First Affiliated Hospital of Dalian Medical University. Between January 2016 and January 2018, the cases of 56 patients who underwent simultaneous bilateral video-assisted thoracoscopic surgery (VATS) for BSMPLA were retrospectively reviewed. Of the 56 patients studied, 14 were male and 42 were female, with a mean age of 55.82±10.39 years (range, 30–68 years). The patients were in fine physical condition. One hundred and thirty tumors were identified in the 56 patients, and all patients underwent preoperative examinations to exclude distant metastases.

Patients were placed under general anesthesia with single-lung ventilation while in the traditional lateral decubitus position to begin the procedure on the relatively simpler side (less lung loss and more simple surgery). Subsequently, the patient was changed to the contralateral decubitus position to perform the more complicated operation on the other side. Although bilateral systemic lymphadenectomy was considered imperative for invasive adenocarcinoma, the patient’s age, cardiopulmonary reserve, and performance status, as well as the results of intraoperative frozen section analysis, were carefully considered when determining the extent of resection.

During the operation, a 1.5-cm port for the video thoracoscope was placed in the seventh or eighth intercostal space in the mid-axillary line, and another 3–4 cm port for endoscopic instrumentation was placed in the third or fourth intercostal space in the anterior axillary line. Seven patients required a third port in the posterior axillary line for segmentectomy of the left upper lobe. Bilateral closed thoracic drainage tubes were used safely to observe air leakage or active bleeding.

The mean postoperative hospital stay duration was 5.39±2.67 days. Eight (14.2%) of the 56 patients experienced a postoperative complication comprising persistent air leakage for more than 5 days. There was no perioperative death. There was no patient with severe pneumonia or infection of incision. There were three patients with atrial fibrillation, one of whom had it before surgery. One patient was transferred to intensive care unit (ICU) after surgery and returned on the second day for safety. One patient with bilious small pleural effusions(<500 mL) and three patients with unilateral small pleural effusions underwent chest radiography 30 days after operation. The four patients without any symptoms did not require treatment.

Eight tumors from four patients were subjected to genetic analysis based on next-generation sequencing (Table 2). The pathologic characteristics of patients with BMPLC are shown in Table 3. 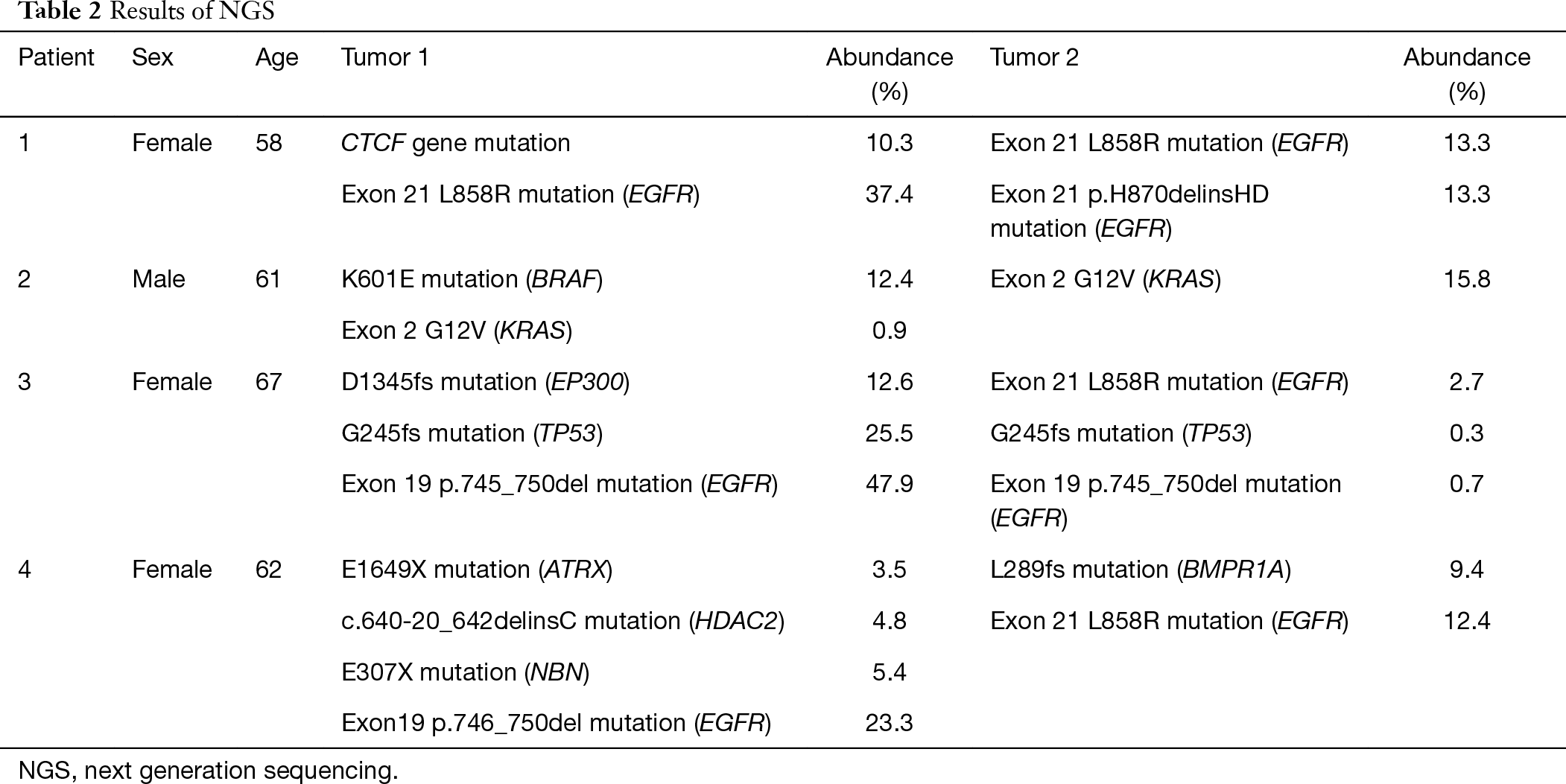 The median postoperative follow-up was 19 months (range, 8–32 months) from the date of the surgery. After bilateral resections, recurrence presented with pulmonary dissemination in 1 patient (N2 positive). The patient had accepted targeted therapy to slow the progression of the disease. One patient (N2 positive) died of heart attack 9 months after surgery without recurrence or metastasis. The other 62 patients had no progress in disease.

Currently, multiple primary lung cancers (MPLC) are detected in up to 10% of patients with early-stage lung cancer, and the incidence continues to increase with improved rates of health awareness. Therefore, a better understanding of the biology of MPLC is needed to identify these patients, devise cancer prevention strategies, and define treatment algorithms and prognoses. However, the most widely referenced definition of MPLC was reported by Martini and Melamed in 1975 (4). As the treatment and prognosis of MPLC differ significantly from those of intrathoracic metastatic diseases, it is important to differentiate these conditions and precisely evaluate the preoperative comprehensive TNM stage, which depends on the most advanced TNM stage.

Despite the need for thoracic surgeons to remain aware of BSMPLA and thus ensure that affected patients are aware of surgical options, the lack of clear clinical guidelines for this disease presents a significant hurdle to successful treatment. Although complete resection is the treatment of choice for MPLC, the need to preserve the pulmonary parenchyma means that limited resection (anatomical segmentectomy or wedge resection) is befitting, particularly in patients with early-stage disease (5,6). An adequate margin (>2 cm or the diameter of the nodule) is a prerequisite for sublobectomy. Sublobectomy of stage I lung cancer can achieve satisfactory results (7-10). At our institution, we have applied the following principles: (I) operation is the first choice in the absence of contraindications (11); (II) the retention of healthy lung tissues and effective and complete removal of tumors are equally important; (III) if MPLC cannot be removed completely at a time, the tumor with the worst prognosis should be removed first. For simultaneous bilateral VATS, we begin the procedure on the relatively simple side with less lung loss and more simple surgery. Subsequently, the patient was changed to the contralateral decubitus position to perform the more complicated operation on the other side; (IV) anatomical segmentectomy or wedge resection may be applied according to the tumor characteristics and patient’s physical condition; (V) genetic analysis based on next-generation sequencing is supplement to differentiate BSMPLA from intrathoracic metastatic diseases, but high costs limit genetic analysis.

Although staged operations are more commonly accepted over simultaneous operation, the latter offers several advantages. Namely, simultaneous operation is associated with lower total hospital and surgical instrument costs, shorter durations of anesthesia and overall surgery, shorter rehabilitation times, shorter hospital stays, and more rapid treatment of bilateral disease. However, simultaneous bilateral thoracotomy is associated with greater losses of lung function, increased physical trauma, and higher rates of complications and death. It is almost the surgical contraindication. However, simultaneous bilateral VATS has been confirmed as both feasible and safe, and may serve as a surgical option that would overcome the challenges faced by patients with BSMPLA. In our study, therefore, we deemed it necessary to assess each patient's fitness for surgical treatment, using parameters such as age, performance status, cardiovascular evaluation, basic spirometry and diffusion capacity, and predicted postoperative lung function (12). Additionally, we considered the wishes of patients and their families as essential to decisions regarding simultaneous bilateral VATS.

Regarding safety, at our institution we first operated on the less affected side (less lung loss and more simple surgery) and aimed to reduce the risk of air leakage. Furthermore, when changing the patient’s position, we were careful to avoid contaminating the disposable medical products and surgical instruments and ensured that sterilization and draping procedures were completed again before initiating the contralateral operation. Additionally, the closed thoracic drainage tube of previous side was available during the operation of another side. It is imperative to protect bilateral phrenic nerves and avoid respiratory function damage. The technique used for pain control is bilateral intercostal nerve block and epidurals placed. There were no episodes of severe hypoxemia or hypercapnia during these operations.

To alleviate pain and minimize the effects on respiration, the unilateral drainage tube was removed in the short-term after surgery to convert a bilateral procedure into a unilateral surgery, a procedure that proven safe by chest radiographs obtained 30 days after surgery. This tube was removed on the first day after surgery in ten patients and on the second day in 30 patients, using subtle manipulations to avoid lung leakage. The recovery process after a removing of unilateral drainage tube in the short-term after surgery is similar to that of unilateral surgery. We note that the use of hemostatic materials could shorten the drainage time, as well as the hospitalization time, and could increase the rate of hospital turnover. Still, we observed obvious differences in the time to first activity out of bed, postoperative hospitalization stays, and chest drainage duration between patients who underwent lobar-lobar resections and others.

Individualized decisions regarding surgical procedures are based on the tumor characteristics, patient’s physical condition and decisions of patients and surgeons. In this context, the safety and feasibility of simultaneous resections of the left upper and right lower lobes, which comprise the two largest lobectomies, remain to be discussed. We note that operative success depends on both surgical technique and perioperative respiratory management. Anesthesia and intraoperative respiratory management are unnoticed easily. However, surgeons cannot ignore an iatrogenic loss of lung function. Endotracheal suctioning, together with avoiding clamping and lung contusion, are applied to reduce the rate of complications such as pneumonia and atelectasis.

In most patients, clinical, radiologic, and morphologic features are used to make confident conclusions that favor either multiple primary diseases or intrapulmonary metastases. Here, an assessment of the genomic profiles of multiple lung adenocarcinomas can complement the histological findings and improve the staging accuracy (13,14). In this study, we found that next-generation sequencing methods supported the diagnosis of BSMPLA for eight tumors in four patients. Next generation sequencing (NGS) of total exons avoids some tumor heterogeneity errors, but not all. The identification of differences in genomic mutations among multiple tumors can provide an understanding of tumorigenesis and suggest options for targeted therapy.

Improvements in minimally invasive comprehensive surgical techniques have led to better clinical outcomes in patients with BSMPLA. However, the selection of surgical technique should account for the patient’s age, cardiopulmonary reserve, underlying comorbidities, tumor type, tumor location, and comprehensive TNM stage, as a surgical strategy could achieve better results in fit patients. In our study, we found that simultaneous bilateral VATS was feasible, safe, and reproducible in our small cohort of patients with BSMPLA. Future studies will provide follow-up and five-year survival data, as all patients our study group were treated within the last 2 years.

The authors would like to thank all of the patients and their families, as well as the team of investigators and operations staff involved in these studies.

Ethical Statement: This study was approved by the Ethics Committee of the First Affiliated Hospital of Dalian Medical University (YJ-KY-FB-2014-04).