Tuberculosis (TB) has existed for millennia and remains a major global health problem. In 2016, 6.3 million new cases of TB were reported (up from 6.1 million in 2015) (1). The medical staffs in medical institutions that treat TB who come in contact with many patients or are directly exposed to samples containing TB are at a high risk of biological contamination and occupational exposure (2). The risk of TB transmission is higher among patients and medical staff and in the laboratory than among the general population. Some studies suggest that general medical staff and staff involved in TB prevention and control are in a high-risk environment and clearly have higher rates of TB infection and TB incidence than does the general population (3-6). Medical staff who participate in TB-related work for more than 1 year have a relative risk of infection 1.5–2.4 times the risk of other groups (7). In high-income countries such as the United States, Canada, and France (2), which implement early TB infection control measures including special TB clinics and triage systems, negative pressure isolation wards and mechanical ventilation devices, and medical respirators or masks for medical staff, etc., the infection rate of TB is between 1.2% and 50%, and the incidence of TB is 130 per 10,000 in Portugal. However, in low- and middle-income countries such as Brazil (8), India, Vietnam (9) and Uganda (10), etc., the infection rate of TB is between 41% and 72%, and the incidence of TB is between 558 and 600 per 10,000 (7). The conditions of implementation of TB infection control measures vary. High-income countries implemented standard infection control measures earlier; however, although low- and middle-income countries have also implemented TB infection control measures to a certain extent, the measures lack normalization and comprehensiveness (5,11,12). The World Health Organization launched new “TB infection control guidelines” in 2009, and has called on countries to make plans, to regularly perform TB screening of medical staff, and to include in the record the date and results of screenings. China has a large number of TB cases; additionally, half of these new cases are infectious. Therefore, this important and urgent public health problem necessitates analysis of the current TB infection status of Chinese medical staff, improvement of the understanding of TB among these workers, and implementation of the required measures to strengthen TB understanding and prevention. In 2010 and 2011, China conducted related studies on the TB infection status of medical staff in specialized TB hospitals (13,14). However, China has allocated a large amount of manpower and financial resources to TB prevention and control in the past 5 years, and the protection and control measures in specialized TBs hospitals have been greatly improved. There have been no studies on tuberculosis hospital infections in the past five years, and the immune status of tuberculosis medical staff has not been studied also. Therefore, it is important to re-analyze the TB infection conditions of medical staff in specialized TB hospitals to provide effective methods for other high-burden countries to better prevent TB infection in hospitals.

The study was approved by the Research Ethics Committees of the Fifth People’s Hospital of Suzhou (No. 2017003), informed consent was respectively obtained from all participants before their enrollment in this study and all methods were performed in accordance with relevant guidelines and regulations.

The epidemiological method of cluster sampling was adopted in this study (Figure 1); all medical staff members (n=205) in our specialized TB hospital were chosen as the experimental group; 139 completed the questionnaire (Figure 2) but 45 were excluded because TB history or chest X-ray image abnormality; the 94 medical staff were enrolled finally. 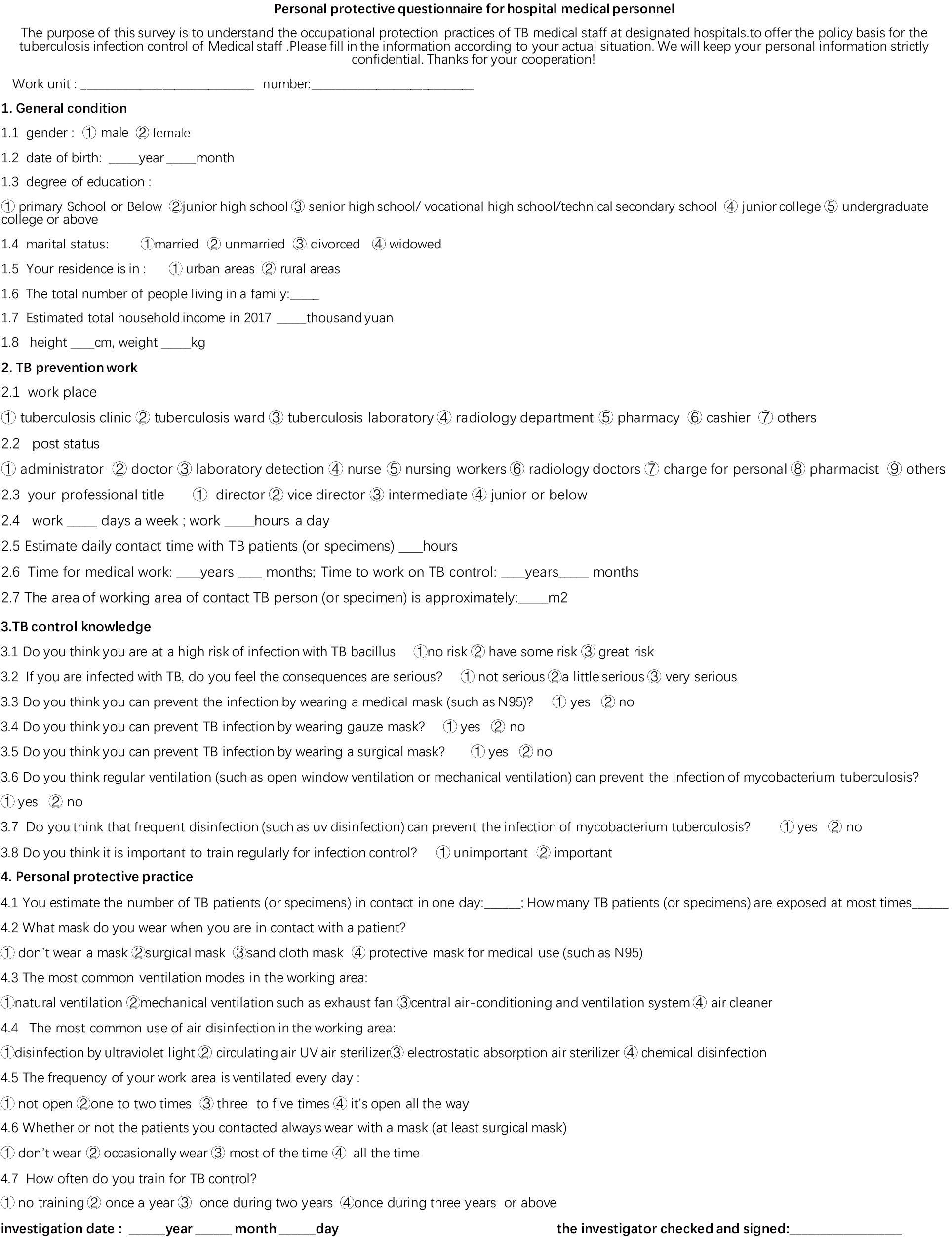 Exclusion criteria applied to staff who could not participate in the physical examination because of vacation or allergies and staff who were pregnant or lactating.

All the research subjects met the following criteria: (I) no history of TB; (II) no recent symptoms or signs of active TB; and (III) no active or obsolete lesions identified by chest X-ray examination. 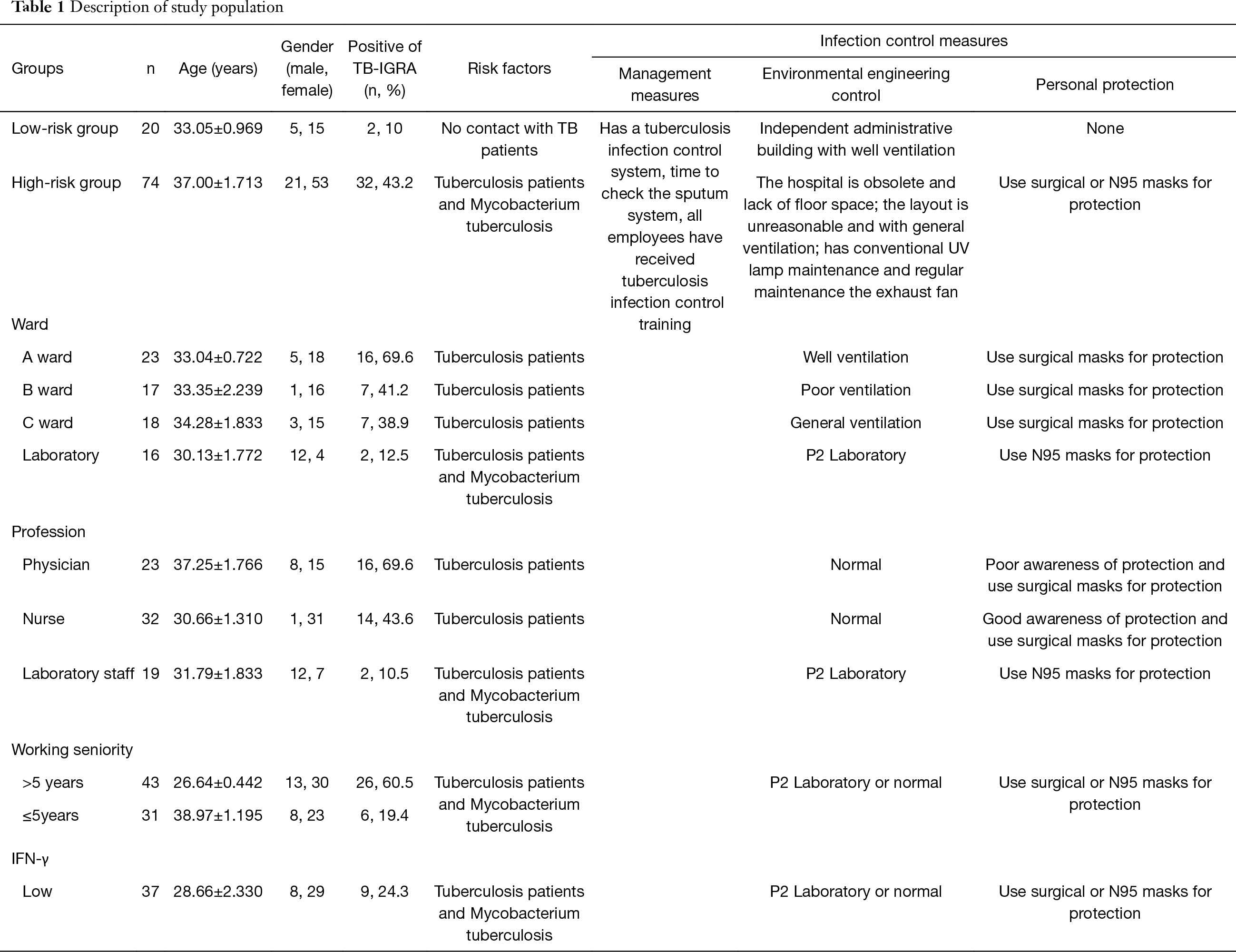 Blood samples were obtained after fasting and before 9 AM. Three heparin tubes were collected: (I) a negative-control tube (NIL tube), (II) an antigen tube (AG tube; contained a coating of specific M. tuberculosis antigens (ESAT-6, CFP-10, TB 7.7) that came into contact with the patient's T cells in the blood sample), and (III) a positive-control tube containing phytohaemagglutinin-P (PHA) (MIT tube). The concentration of IFN-γ secreted by the cells was measured by ELISA. The results were measured in IU/ml and interpreted in accordance with the manufacturer’s recommendations as negative, positive, or indeterminate.

The serum samples were collected in serum separator tubes and allowed to clot for 2 hours at room temperature. Then, they were centrifuged at 3,000 rpm for 15 minutes and stored at −80 °C for the ELISA assay. The levels of IFN-γ in the serum were analyzed using ELISA kits (BlueGene Co., Ltd., Shanghai, China) according to the manufacturer’s instructions.

The data were analyzed by GraphPad Prism 5.0 software and SPSS and were presented as the mean ± standard error of the mean (SEM). For comparisons of the collected data, a nonparametric test (Mann-Whitney U test), Student’s t test or Chi-square test was performed, the bar in each group in the figures represents the mean ± SEM. The association between risk factors and the TB-IGRA results was assessed by multinomial logistic regression, and two-tailed values of P<0.05 were considered statistically significant.

Table 3 Multivariable analysis (logistic) of the differences between the TB-IGRA positive and negative in sex, working seniority, profession, ward and IFN-γ
Full table

Analysis of the correlation between risk of exposure/infection and immune function found that medical staff in the high-risk group had higher IFN-γ levels, a higher proportion of CD4+ T cells, and a lower proportion of CD8+ T cells than the low-risk group (all P<0.05), while the other comparisons did not identify any differences (Figure 3). 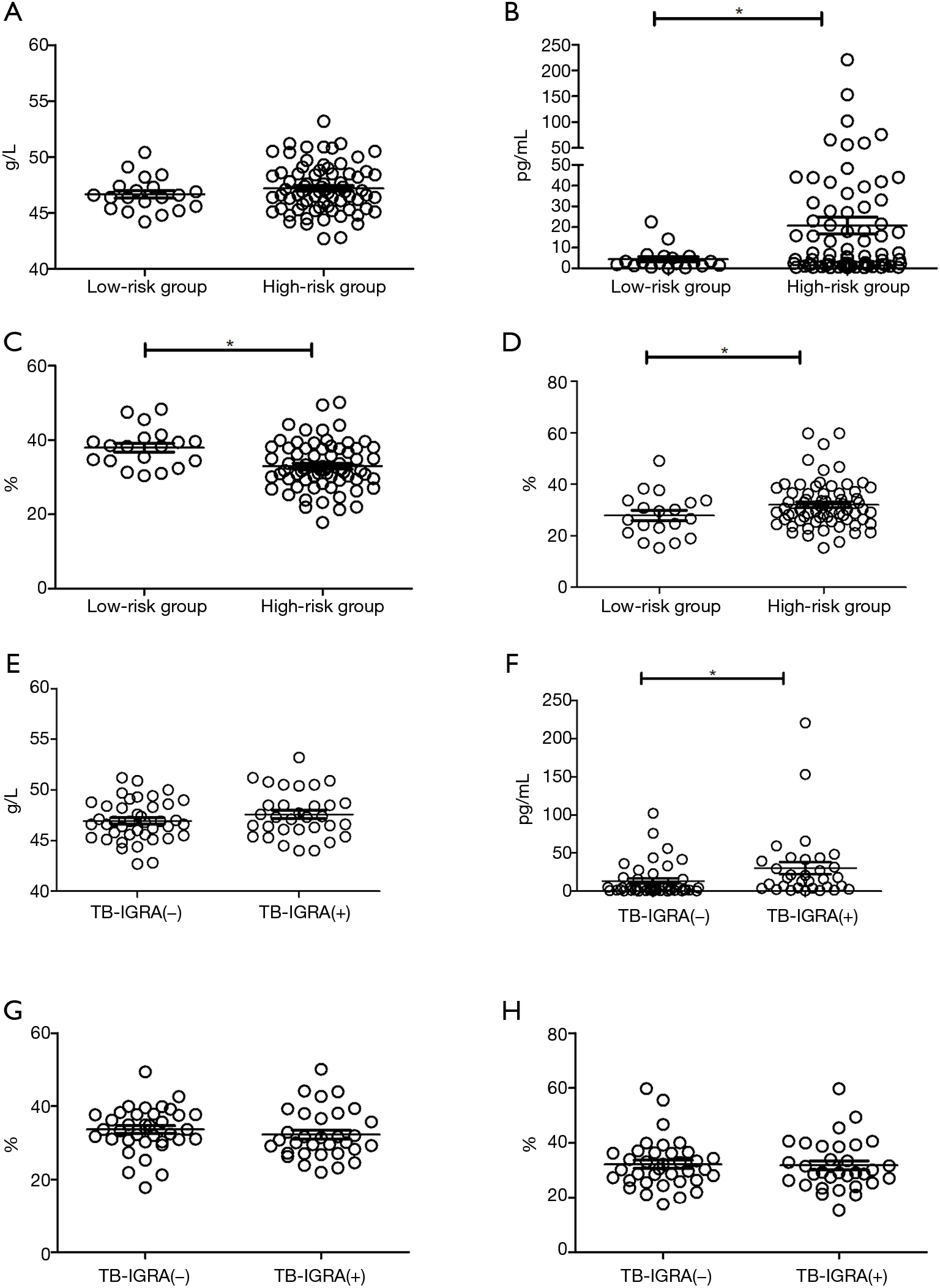 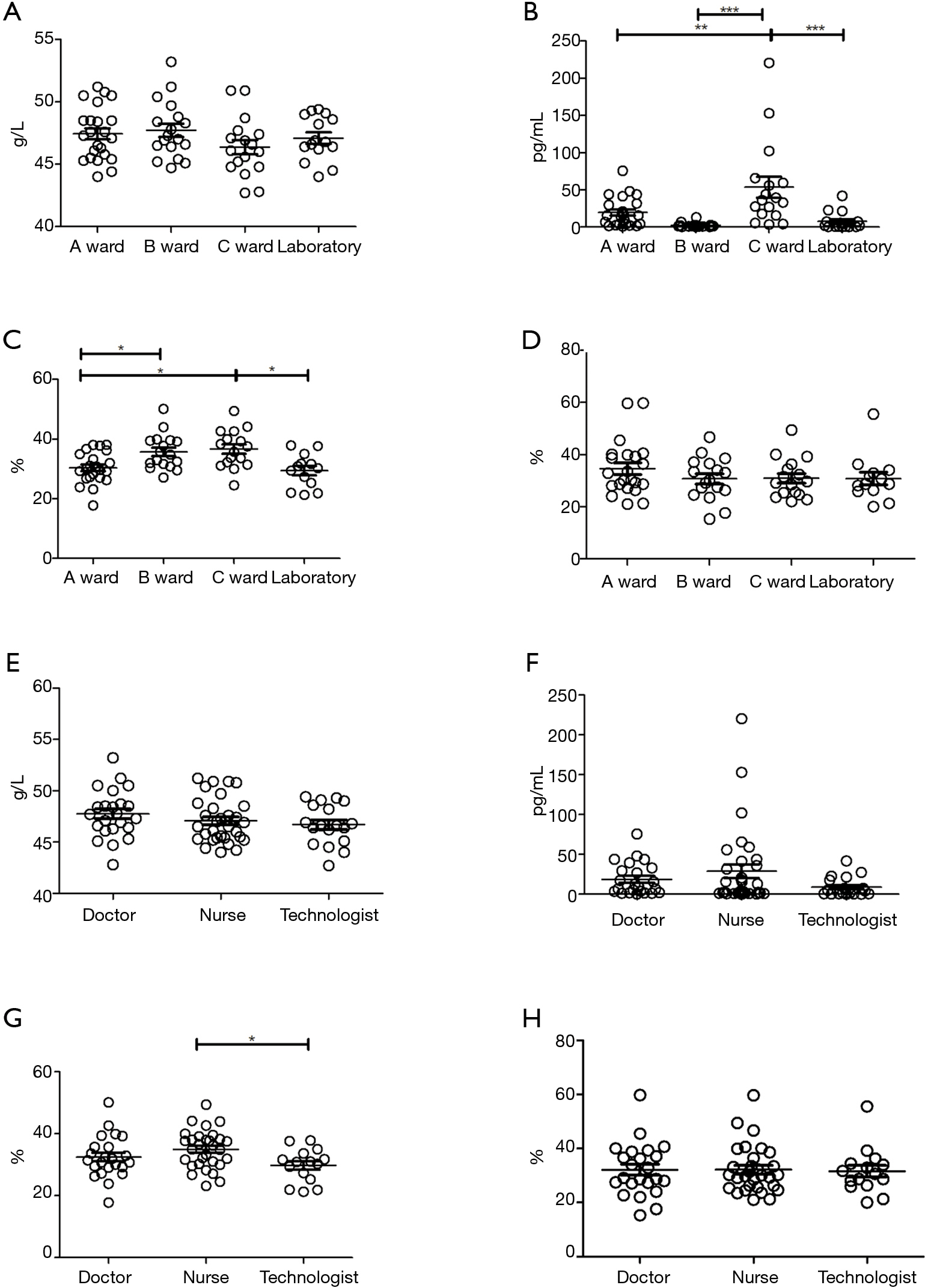 Since 2010, the Chinese government has invested a significant amount of money into the prevention and control of TB infections in hospitals and has formulated standardized TB infection control measures by referring to the experiences of developed countries. These measures included establishing special TB clinics, establishing negative pressure isolation wards with ≥12 air changes per hour (AHC), and providing N95 respirators to medical staff. In 2010 and 2011, China conducted related studies on the TB infection status of medical staff in specialized TB hospitals (13,14), but these studies could not have reflected the achievements of the hospital infection control scheme that has been systematically implemented in China in recent years. Therefore, it is important to reanalyze the TB infection status of the medical staff in specialized TB hospitals. This study is also the first to systematically discuss the immune status of medical staff in a specialized TB hospital, and the results may help to provide more effective methods to reduce TB infections in hospitals for other countries with a high TB burden.

This study compared the TB-IGRA results of medical staff members and found the results were significant improved in the past five years in China. However, this study also found that medial staff still had obviously higher positive rates than low-risk groups; these results were similar to those of the investigation by the Beijing Tuberculosis Hospital in 2011 (13) but better than the survey results in Henan (14) and Inner Mongolia (15) in 2010. Due to the particular status of Beijing in China and the different methods adopted by the Henan research, we are more inclined to select the research from Inner Mongolia as a reference, and the above results suggest that the measures adopted for the prevention of TB infection in hospitals are very efficient but require further improvement. We conducted a further analysis of whether factors related to the working environment, occupational history and type of work, were risk factors for TB infection in hospitals. Notably, infection rates of staff working in P2 laboratories and wearing N95 respirators, particularly in the study of the working environment, were significantly decreased to levels as low as those of the non-close-contact population, whereas staff wearing surgical masks had no corresponding change. This study also found huge differences in infection rates among different wards, and different ventilation conditions may be responsible for these findings based on our questionnaire analysis. This study also found that infection rates were significantly higher among doctors than individuals of other professions. The survey results demonstrated that protective consciousness was significantly lower in doctors than in the nurses and laboratory staff, which we think is the reason for the differing infection rates.

This study also systematically analyzed hospital infections and the immune function of medical staff in TB hospitals and analyzed the associated factors. Moreover, this study found that the problem of immune system disorders and health problems among the medical staff of TB hospitals should be noted by hospital administrators and medical staff.

Due to the small number of cases and single-center study, this study also has its limitation and the results may not generalizable. So we compare the low risk group between our study and others (2,7,13,15) and found there is no statistical difference. Even though, the results of this study still only consider as an indication for the prevention and possible strategies and more cases and multi-centers study still need.

This study systematically analyzed the status and factors of tuberculosis hospital infection of the medical staff and the immune charge in long-term exposure to tuberculosis. Although this study has limitations, its results still have special value. It may provide a theoretical basis for China and other countries with a high TB burden to further improve their strategies regarding the prevention of TB infection in hospitals and may give an indication for the improvement of the personal health of medical staff in infectious disease hospitals.

We thank all medical staff and support staff who participated in this study.

Ethical Statement: The study was approved by the Research Ethics Committees of the Fifth People’s Hospital of Suzhou (No. 2017003), informed consent was respectively obtained from all participants before their enrollment in this study.