Comparison of clinical efficacy between ultra-LABAs and ultra-LAMAs in COPD: a systemic review with meta-analysis of randomized controlled trials

Chronic obstructive pulmonary disease (COPD) is a common respiratory disease characterized by largely irreversible airflow limitation (1). It is a major global health burden, and its prevalence is expected to increase, with an estimated annual death rate of over 4.5 million worldwide by 2030 (2). COPD patients often have chronic respiratory symptoms, exercise intolerance, and poor health-related quality of life, contributing to significant use of healthcare resources (1). In addition, a considerable proportion of COPD patients experience acute exacerbation and the frequent exacerbations are associated with rapid decline in lung function (3,4), aggravated quality of life (5,6), and increased mortality (7-10).

Among long-acting bronchodilators, tiotropium is preferred for exacerbation prevention based on comparison to LABAs in two head-to-head comparisons (15,16). However, one of these two studies compared efficacy between tiotropium and salmeterol, a twice-daily LABA (15), and there is an absence of head-to-head comparative trials with newly introduced once-daily LAMA and LABA. Since there are no sufficient data supporting the use of once-daily LAMA (ultra-LAMA) over once-daily LABA (ultra-LABA) for exacerbation in COPD patients, we conducted a systemic review and meta-analysis for the comparisons of the clinical efficacy and safety of ultra-LABA (indacaterol, olodaterol, or vilanterol) and ultra-LAMA (tiotropium, glycopyrronium or umeclidinium) in stable patients with moderate to severe COPD.

This systematic review is reported in accordance with the Preferred Reporting Items for Systematic Reviews and Meta-Analyses (PRISMA) statement (Figure 1) (17). We identified published studies from MEDLINE, EMBASE, and the Cochrane Central Register of Controlled Trials (up to March 1, 2017) databases using keywords related to COPD, LABAs, LAMAs, and randomized control trials (RCTs). The title and abstract were independently analyzed by two authors (E.Y.C and S.Y.K) for screening. Trials published solely in abstract form were excluded because the methods and results could not be fully analyzed. They independently assessed all studies for inclusion based on the criteria for study design, outcome, and intervention for participants. After they obtained full texts that could be potential candidates, they assessed and confirmed eligibility for the analysis. Disagreements were discussed and resolved by consensus. 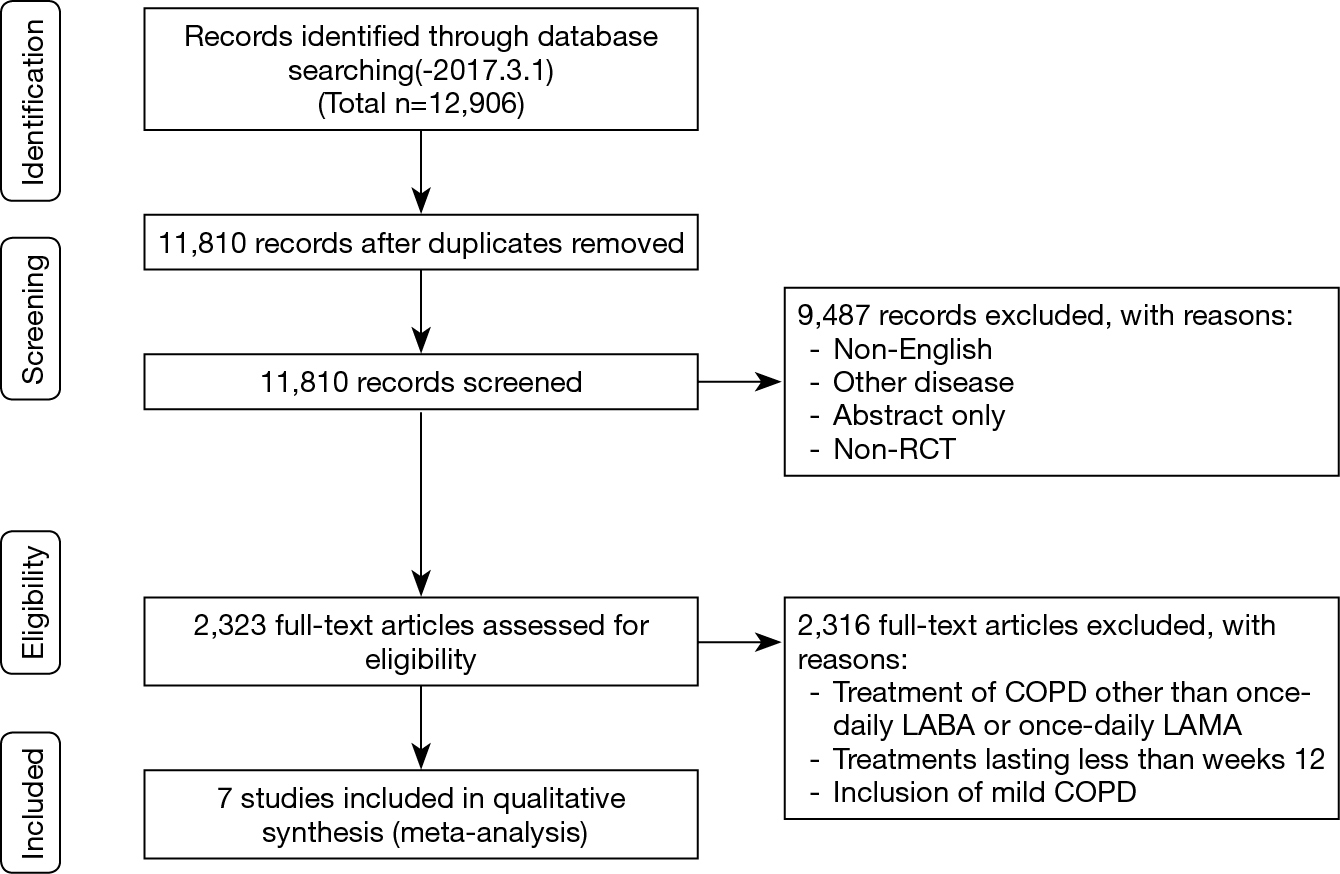 Figure 1 Flowchart for the identification of studies included in the meta-analysis.

The inclusion criteria for this study were as follows: (I) patients with moderate-to-severe COPD by Global Initiative for Chronic Obstructive Lung Disease (GOLD) diagnostic criteria; (II) randomized control trials (RCTs) with comparisons of ultra-LABAs (indacaterol, olodaterol, or vilanterol) and ultra-LAMAs (glycopyrronium, tiotropium, or umeclidinium); (III) at least 12 weeks of follow-up; and (IV) written in English. In this study, ultra-LABAs and ultra-LAMAs were defined as once-daily bronchodilators (18).

Two reviewers independently assessed the risk of bias of the included studies for sequence generation, allocation concealment, blinding of participants and researchers, blinding of outcome assessment, incomplete outcome data addressed, and free of selective reporting as recommended in the Cochrane Handbook of Systematic Reviews 5.1. (21).

Statistical analysis was performed using the R 3.3.2 (Vienna, Austria; http://www.R-project.org/) package ‘metafor’ for meta-analysis of the included studies. Mean differences (MDs) or odds ratios (ORs) for end points were estimated and tested under the fixed effect model or the random effect model. The pooled data were applied to a random effect model if heterogeneity was present in the data of more than 4 studies and to a fixed effect model otherwise. The precision of the estimates was quantified by the 95% confidence interval (CI). Heterogeneity was measured using the Higgins and Green I2 test, which is calculated as 100%×(Q–df)/Q, where Q is the observed chi-square statistic, and the degrees of freedom (df) is the number of studies less one. The value of I2 ranges between 0% (no heterogeneity) and 100% (maximal heterogeneity), and heterogeneity was considered to be mild (<30%), moderate (30–60%), and high (>60%) (21). We also evaluated potential publication bias using Egger’s regression test and the funnel-plot (22). P values <0.05 (two-tailed test) were considered significant.

All studies published by March 2017 were included, and relevant patient baseline characteristics are summarized in Table 1. All RCTs were randomized and double-blind, and we included comparisons with open-label tiotropium in the RCTs. The duration of follow-up ranged from 12 to 56 weeks. 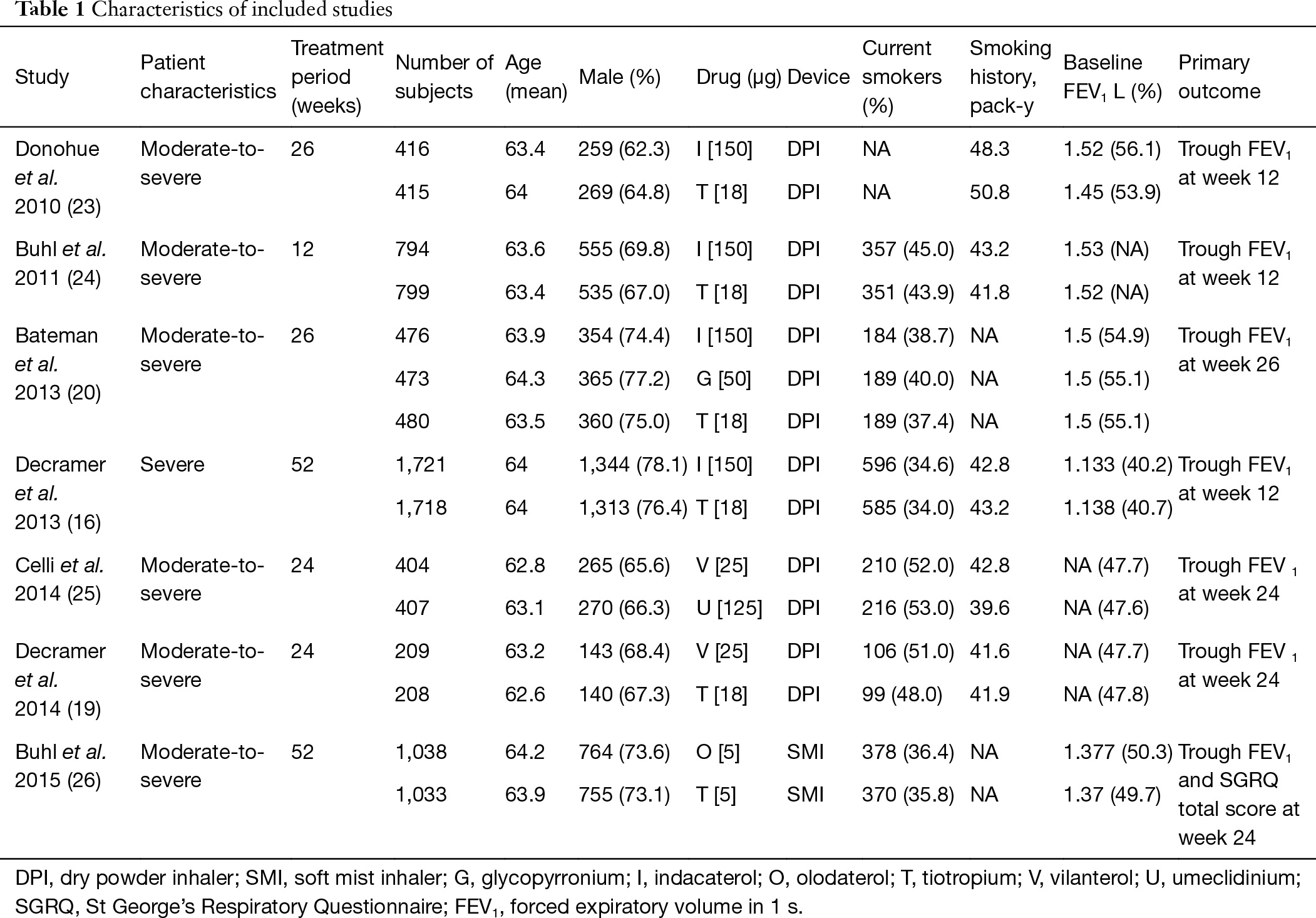 Change of trough FEV1 from baseline

Heterogeneity and Bias in the included studies

High levels of heterogeneity were detected on SGRQ total score change (I2=99.82%, P<0.0001) and TDI change (I2=99.82%, P<0.0001). There was moderate level of heterogeneity on change of trough FEV1 from baseline (I2=47.58%, P=0.1532) and mild level of heterogeneity on COPD exacerbation (I2=0.00%, P=0.7619). The assessments performed by the authors of each risk of bias item for each included RCT are summarized in Table 2. All papers were funded by pharmaceutical companies. Two studies were at high risk for blinding of participants and personnel because they used open-labeled tiotropium (20,23). For publication bias, significant asymmetry in the funnel-plot was not detected for the primary and secondary outcomes (P=0.6630 for COPD exacerbation, P=0.7898 for change of trough FEV1 from baseline, P=0.7078 for SGRQ total score change, and P=0.7495 for TDI change) (Figure 5). Therefore, we assumed there was no evidence of publication bias.

Table 2 Risk of Bias in the included studies
Full table

In this study, we performed a meta-analysis on the clinical efficacy and safety of ultra-LABA (indacaterol, olodaterol, or vilanterol) versus ultra-LAMA (glycopyrronium, tiotropium, or umeclidinium) in stable patients with moderate-to-severe COPD. The main finding of this meta-analysis was that COPD exacerbation occurred less often with the ultra-LAMAs than ultra-LABAs among patients with moderate-to-severe COPD, while ultra-LAMAs were as effective as ultra-LABAs in terms of trough FEV1 and quality of life including SGRQ and TDI at the first follow-up.

A previous meta-analysis based on four studies [Donohue et al. (23), Buhl et al. (24), Bateman et al. (20), and Decramer et al. (16)] comparing the clinical efficacy and safety of tiotropium, a ultra-LAMA, and indacaterol, a ultra-LABA, showed that COPD worsening was more frequent in the indacaterol group than in the tiotropium group (27). We affirmed these findings with various types of ultra-LABAs and ultra-LAMAs and a larger number of studies. Our findings also support the current recommendations of the GOLD guideline (1), which reports an advantage of ultra-LAMAs over ultra-LABAs in exacerbation-prevention properties. The potential mechanisms might be explained by the anti-inflammatory effects of LAMA (28), which was shown in an animal model of COPD (e.g., reduction of neutrophils and proinflammatory cytokine levels and inhibition of mucus secretion as well as airway remodeling) (29-31). However, the results of our study need careful interpretation. First, we used COPD worsening in the adverse events for the analysis of COPD exacerbation except for Decramer et al. (19) as COPD worsening has comprehensive meaning including exacerbation. This is because only one head-to-head comparative study between tiotropium and indacaterol for COPD exacerbation has been published. Secondly, the number of studies including ultra-LAMAs or ultra-LABAs other than tiotropium or indacaterol was relatively small. In addition, since a considerable number of studies in our study included tiotropium, it might not be generalized to all ultra-LAMAs. When in vitro pharmacological profiles were observed using human bronchus, the potency, onset of action, and offset of action were different among LAMAs (32). In addition, as most studies on the anti-inflammatory effects of LAMAs were performed with tiotropium (33,34), further studies are needed to elucidate whether other ultra-LAMAs exhibit similar features to tiotropium (31).

Figure S1 Subgroup analysis for the impact of ultra-LAMA versus ultra-LABA on (A) St. George’s Respiratory Questionnaire score and (B) transition dyspnea index at week 12/fixed effects model.

Our study has an advantage that our analyses were relatively free of publication bias in funnel plots, which enhances the reliability of the results of the meta-analyses. Although high levels of heterogeneity were detected in SGRQ total score change and TDI change, there was only mild heterogeneity in COPD exacerbation. Thus, the exacerbation prevention effect of ultra-LAMA over ultra-LABA, the primary outcome in this study, can be considered to be based on high quality of meta-analyses, which is a major strength of this study.

In summary, this study suggests that COPD exacerbation occurred less often with ultra-LAMAs than ultra-LABAs with no significant differences in improvement of lung function or quality of life in moderate-to-severe COPD patients.