Esophageal cancer (EC) is a highly prevalent malignancy in China. According to the data released by National Cancer Registry Center of China in 2015, the prevalence of EC was 21.17/100,000 in China in 2012, ranking fifth among all malignancies; the mortality rate was 15.58/100,000, ranking fourth. It is expected that there will be 477,900 new EC cases nationwide in 2015, whereas 375,000 people will die from EC (1,2). Worldwide, EC is the 8th most common malignancy, with 416,000 new cases in 2012 (3). At present, EC treatment is based on multidisciplinary treatment, but surgery remains the most effective therapy in optimizing long-term prognosis in patients without metastatic disease. The ideal surgical approach is a matter of debate.

There is a dense lymphatic network in the esophageal wall. Once EC involves the submucosal layer, lymph node metastasis occurs in over 20% of patients (8). The risk of lymph node metastasis is associated with depth of tumor invasion (T stage). The number of metastatic lymph nodes negatively correlates with survival. Studies have shown that the number of harvested lymph nodes may impact survival (4,5). Liu et al. (9) and Chen et al. (10) from Fujian Tumor Hospital reported that the number of involved lymph nodes after three-field lymph node dissection in thoracic esophageal carcinoma was an important independent prognostic factor; according to the 7th Edition of the AJCC Cancer Staging Manual, the 5-year survival in EC with N0, N1, N2, or N3 metastasis was 77.5%, 41.2%, 22.2%, and 7.0%, respectively (P<0.0001) .Therefore, selecting the corresponding surgical approach according to the specific characteristics of EC and its stage and carrying out standardized and complete lymph node dissection are critically important for improving survival in patients with EC and lowering the risk of post-operative recurrence (9-15).

In China, the left thoracotomy approach was the first approach used for treatment of EC, and it is still widely applied in northern China. During the treatment of EC via the left thoracotomy approach, the presence of the aortic arch and the left subclavian artery and the narrow triangle area above the arch limits the ability to dissect the superior mediastinum lymph nodes, especially those near the left and right tracheoesophageal areas and recurrent laryngeal nerves. Resection of lymph nodes in the celiac axis may also be limited. Complete thoraco-abdominal lymph node dissection therefore cannot be achieved completely via a left side approach. Besides, the use of multimodality therapy (neoadjuvant chemo/radiation therapy followed by surgery) was not common in China prior to 2000. As a result, the effectiveness of surgical treatment for EC had not been improved before 2000 and the patients’ 5-year survival remained around 30% (12,16-18). 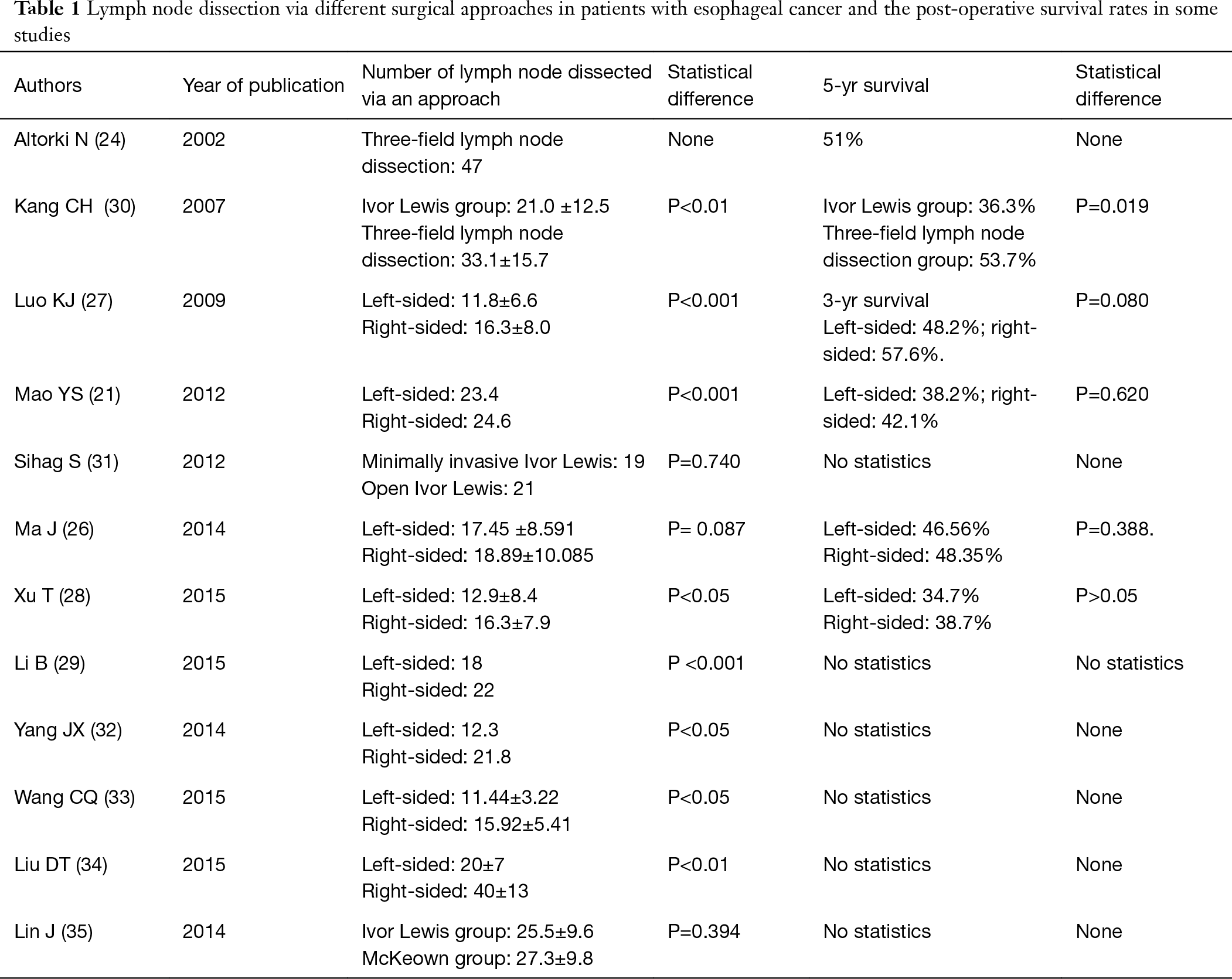 A meta-analysis by Guy Eslick of these studies which includes 3,539 patients (2,080 esophagectomy through left thoracotomy); and 1,459 patients resected via the right thoracotomy) and compared the number of lymph nodes retrieved. Survival analysis was possible in only 1,019 left-sided esophagectomy and 920 right-sided esophagectomy patients. The pooled analysis suggests that the left-sided approach retrieves 3.54 less lymph nodes than the right-sided approach (Figure 1) (36).

Figure 1 Mean difference in the number of lymph nodes retrieved between left and right-sided approaches. 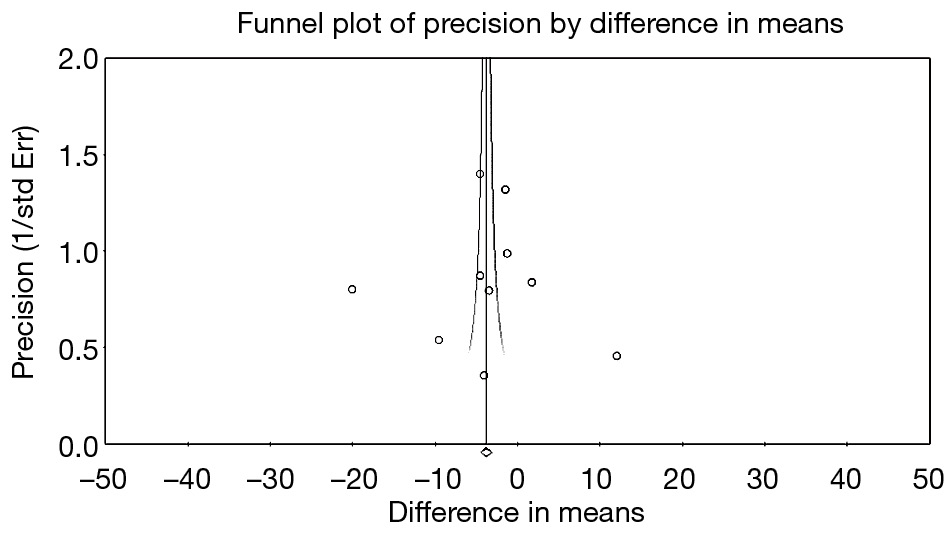 These studies had low heterogeneity that was not statistically significant and again there was no evidence of publication bias (Figure 4). 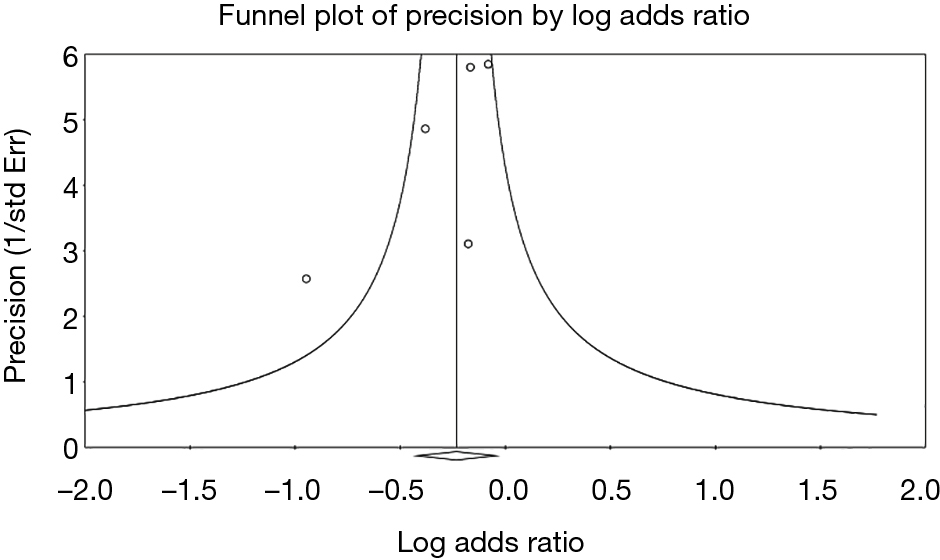 Minimally invasive esophagectomy (MIE) may include different approaches such as total MIE (laparoscopy, and thoracoscopy in different positions (in lateral position, in prone position or in semiprone position), the RAMIE (robot assisted MIE), the MIE transhiatal approach and hybrid approaches (type 1 combines laparoscopy and right thoracotomy and type 2 include the laparotomy and thoracoscopy). MIE means less operative trauma and as consequence of this has potential advantages such as less blood loss, less postoperative respiratory infections, less pain, shorten intensive care and hospital stay, and better postoperative quality of life (36). Uncertainty includes questions about increased operative time, and the long-term oncologic safety and outcomes. Multiple studies, long series, meta-analysis and two randomized control trials, have demonstrated the short and long-term oncological safety (at three years follow up) of MIE compared to open esophagectomy (36-39) The TIME trial, a small, prospective trial (115 patients in two arms) found significantly decreased pulmonary infections in patients undergoing MIE compared to open esophagectomy (36). In addition, quality of life at one-year follow-up was better in the MIE group. Although it was a small study, no difference in survival at one and three years was seen (40,41). Many centers in China have had large experiences with MIE with acceptable short-term outcomes. Meta-analysis of Yibulayin et al. (42) included 57 studies with 15,790 patients. They concluded that MIE is superior to OE in terms of perioperative complications (also anastomotic leaks) and in hospital mortality. Mu et al. (43), performed a controlled randomized study comparing the short-term outcomes and 3-year survival between total MIE 3 stage McKeown and the so called dual-incision esophagectomy through an open left thoracotomy (DIE = Sweet procedure). They concluded that MIE and DIE yielded comparable short-term outcomes, however MIE was associated with better three year overall and disease-free survival (43). Moreover, Sun et al. (44) performed an important control randomized study comparing two groups of patients operated by MIE 3 stage Mckeown esophagectomy. One group was treated by early oral feeding and the other by traditional late oral feeding. They concluded that between the two forms of oral feeding (early versus late oral feeding after MIE McKeown) there were no differences in major complication rates and importantly there was an increase in Quality of Life if early feeding was given. Likewise, Wang et al. from Fudan University Shanghai Cancer Center performed a propensity-score matched analysis of 735 MIE patients compared to 652 open esophagectomy patients and found improved quality of life among the MIE patients. The MIE group also had lower rates of complication. No difference in survival was found (45). Using the National Cancer Database, Weksler did not find a significant difference in survival among patients undergoing open, minimally invasive, or robotic esophagectomy (46).

Based on currently available guidelines and expert consensus in China, we suggest a few recommendations for patient selection. For resectable middle and lower thoracic esophageal carcinoma with if preoperative EUS, and CT scan of the chest and abdomen, and whole body PET-CT reveals a clinical stage of T2N0-1M0, neoadjuvant concurrent chemo radiation followed by resection of esophageal carcinoma with thoracic or cervical anastomosis via the conventional two incisions (abdomen and chest) or three incisions (chest, abdomen, and neck), minimally invasive or open with complete two-field (thorax and abdomen) or three-field (neck, thorax, and abdomen) lymphadenectomy is recommended. Patients with clinical stage of T1bN0 can forgo preoperative therapy. For resectable upper thoracic EC, Akiyama et al. (47) found that the upper thoracic EC might have a high probability of metastasis in the upper mediastinum and in the cervical areas and therefore the three-field lymphadenectomy should be considered. The rates of cervical lymph node metastasis of the upper, middle, and lower EC were 46.3%, 29.2%, and 27.2%, respectively. According to Liu et al. (9), the three-field lymphadenectomy (compared with two-field lymphadenectomy) can significantly prolong the postoperative 5-year survival in patients with upper thoracic EC (53.2% vs. 34.1%, P=0.002). Therefore, for resectable upper thoracic EC, esophageal resection and left cervical esophagogastrostomy via 3 incision procedure, MIE, total or hybrid, or open, with total two-field (thorax and abdomen) or three-field (neck, thorax, and abdomen) lymphadenectomy is recommended. For these patients, whether a left or right thoracotomy approach should be selected for surgical treatment remains controversial (21,26-28). According to Ma Ma et al. (26) from Shanghai Zhongshan Hospital, for patients without suspected lymph node metastasis in the superior mediastinum, the 5-year survival rate following left thoracotomy and right thoracotomy was not different, 46.56% and 48.35%, respectively (P=0.388), and the median survival was 52 months and 48 months; the incidence of postoperative complications in the left and right thoracotomy groups was 12.3% and 20.4% (P=0.002), the local relapse rate was 14.8% and 13.3% (P=0.695), and the distant relapse rate 30.4% and 24.8% (P=0.274) respectively. In our opinion, for patients without suspected lymph node metastasis in the superior mediastinum, there are until now no clear evidence of statistical difference in terms of local relapse and long-term survival between left and right thoracotomy approach. However, for middle and lower thoracic EC, if the preoperative EUS + thoraco-abdominal CT/PET-CT reveals the presence of suspected lymph node involvement and metastasis in the superior mediastinum, the current recommended treatment is: resection of EC and complete two-filed/three-field lymph node dissection via the conventional two or three stage, MIE, total or hybrid, or open through the right thoracic approach including a two or three-field lymphadenectomy (18-20,40).

Important point in the treatment of EC is the current implementation of neoadjuvant therapy in the form of chemoradiotherapy or chemotherapy (48,49). Remarkable are the long-term results of the CROSS study, in which patients with clinically resectable esophageal or junctional cancer (cT-1N1M0 or cT2-3N0-1M0) were randomly assigned to receive weekly administration of Carboplatin and Paclitaxel for 5 weeks with concurrent radiotherapy (41.4 Gy given in 23 fractions, 5 days per week), followed by surgery, or surgery alone. Radical resection (R0) was accomplished in 92% of patients in the group of nCRT plus surgery group and 69% in the surgery alone group. Because the decrease in size of the tumors after nCRT, resection was considered easier to perform. Moreover, a pathological complete response was achieved in 49% of the squamous cell cancer patients. Five-year overall survival rate was 47% in the nCRT plus surgery group and 33% in the surgery alone group, respectively (in the Squamous cell cancer it was, 61% versus 30% respectively).

Moreover, the neoadjuvant chemotherapy studies, such as the MAGIC trial have showed a 5 years improvement of 13% compare to surgery alone (48). Important is to remark, that the highest benefit of the CROSS neoadjuvant chemoradiotherapy is observed in the squamous cell cancer which is radiosensitive and the most frequent EC in China.

According to the above systematic review, the levels of evidence were at level III, the quality of the evidence was average, and the strength of recommendation is medium. Thus, according to the findings of retrospective studies and a few prospective studies, performed in China and abroad, the right transthoracic approach is superior to left thoracotomy approach for performing the two-field lymphadenectomy for thoracic EC. This approach can reduce the incidence of postoperative local relapse in the upper mediastinum and thus increase the survival benefit. Therefore, for resectable upper thoracic EC, EC resection plus two-field (thorax and abdomen) or three-field (neck, thorax, and abdomen) lymphadenectomy dissection is strongly recommended through the right thoracotomy approach. However, due to the low evidence levels, large-scale prospective randomized controlled studies are still warranted.

The authors would like to express sincere appreciation to Prof. Wayne L. Hofstetter (Department of Thoracic and Cardiovascular Surgery, University of Texas, MD Anderson Cancer Center, Houston, Texas, USA) for his valuable suggestions to improve the manuscript.