Ground-glass opacity (GGO) is characterized by a radiological finding in high-resolution computed tomography (HRCT) consisting of a hazy opacity that does not obscure the underlying bronchial structures or pulmonary vessels (1), ranging in diameter from 3mm to 3cm (2). It is divided into pure ground-glass opacity (pGGO) and mixed ground-glass opacity (mGGO) according to whether it contains solid components. The pGGO refers to the nodule that grows along the alveolar wall, without the destruction of the alveolar structure. As the size of pGGO increases, with alveolar structure collapses, fibroblasts proliferate, and solid components increase, pGGO becomes mGGO (2). GGO can be a manifestation of a wide variety of clinical features, including malignancies and benign conditions such as focal interstitial fibrosis, inflammation, and hemorrhage (3). The classification of lung adenocarcinoma jointly published by the International Association for the Study of Lung Cancer (IASLC), the American Thoracic Society (ATS) and the European Respiratory Society (ERS), which is mainly classified as adenocarcinoma in situ (AIS), micro invasive adenocarcinoma (MIA), invasive adenocarcinoma (IA) and atipical adenomatous hyperplasia (AAH) (4).

The GGO in young patients has been increasingly encountered in routine clinical practice with the increasingly widespread use of HRCT and the increased resolution of HRCT imaging (5), which made the diagnosis and treatment of GGO in young patients become a hot spot today. Numerous studies have confirmed that GGO was closely related to early lung adenocarcinoma (6), GGO has been used as a screening indicator for lung cancer. The survival rate of surgical resection was close to 100% (7,8). Favorable prognoses for the surgical resection of nodules with a considerable amount of GGO have been reported in several retrospective studies (9-11). However, no scholars have reported the clinical characteristics and prognosis of GGO in young patients systematically. In addition, It has also not yet been established which surgical procedures including treatment of lymph nodes and surgical methods are well-balanced.

We collected the clinical data of 127 young patients who have been diagnosed as GGO and treated with video-assisted thoracoscopic surgery (VATS) in the past year for retrospective analysis. The aim of this study was to clarify its clinical characteristics and prognosis.

From January 2016 to January 2017 at the First Affiliated Hospital of Soochow University, 526 patients were diagnosed with GGO, including 267 young patients and 259 middle-aged patients. Among 267 young patients, 95 were directly treated with VATS, and the remaining patients were followed up routinely in accordance with the Fleischner Society 2017 Guidelines for Pulmonary Nodules. In the process, 32 patients received surgery due to compliance with surgical standards. The indications of VATS were no extensive pleural adhesions; clear surgical field of vision; high surgical technique for surgeons. The criteria of enrollment were treatment-naïve patients with radiologically proven GGO nodules; aged ≥18 years and <44 years; complete resection; without any other site of carcinoma or with metastatic disease; clinical tumor stage and status of lymph node (LN) were evaluated by HRCT scanning, according to the criteria of Union for International Cancer Control (UICC) Tumor-Node-Metastasis (TNM) cancer staging, 7th edition [2010]. This retrospective study was approved by the First Affiliated Hospital of Soochow University.

The GGO nodules were evaluated using HRCT images. All chest CT scannings were obtained at full inspiration and were retrospectively examined for GGO nodules. The diameter of the tumor was defined as the largest axial diameter of the nodule on the lung window setting, where consolidation was defined as an area of increased opacification which completely obscured underlying bronchial structures and vascular markings. Each nodule on preoperative CT scannings was reviewed blindly by one imaging specialist and two thoracic surgeons.

All clinical specimens were examined and recorded by two pathology specialists. Each nodule was reviewed for size, location, differentiation, lymph node status, pleural invasion, lymphatic invasion according to the IASLC/ATS/ERS.

The patient was placed in the lateral position, double-lumen tracheal intubation was performed. Thoracoscopy was performed to detect the adhesion of the thoracic cavity. The specific location of the nodule was judged by finger exploration or preoperative CT-guided Hook-wire. The lesions were wedged by cutting staplers at least 2 cm from the edge of the nodules. According to the rapid pathological results, comprehensive consideration of the patient’s lung function to guide us to the next surgical treatment such as wedge resection, segmentectomy, lobectomy and radical resection.

All cases were followed from the day of surgery. They were examined physically and received chest radiography 2 weeks after operation, and received chest HRCT covering cervical to abdominal lesions every 3–6 months for the first 2 years. All cases were followed up regularly to assess perioperative complications, long-term complications, survival, and quality of life.

The χ2 test was used to compare categorical variables. Student’s t-test was used for continuous variables. Data for the interval between surgical resection and last follow-up visit were analyzed via the Kaplan-Meier method using confirmed recurrences deaths to calculate recurrence-free survival (RFS) and overall survival (OS). A value of P<0.05 indicated that the difference was statistically significant. Statistical analyses were performed using SPSS19.0 software. 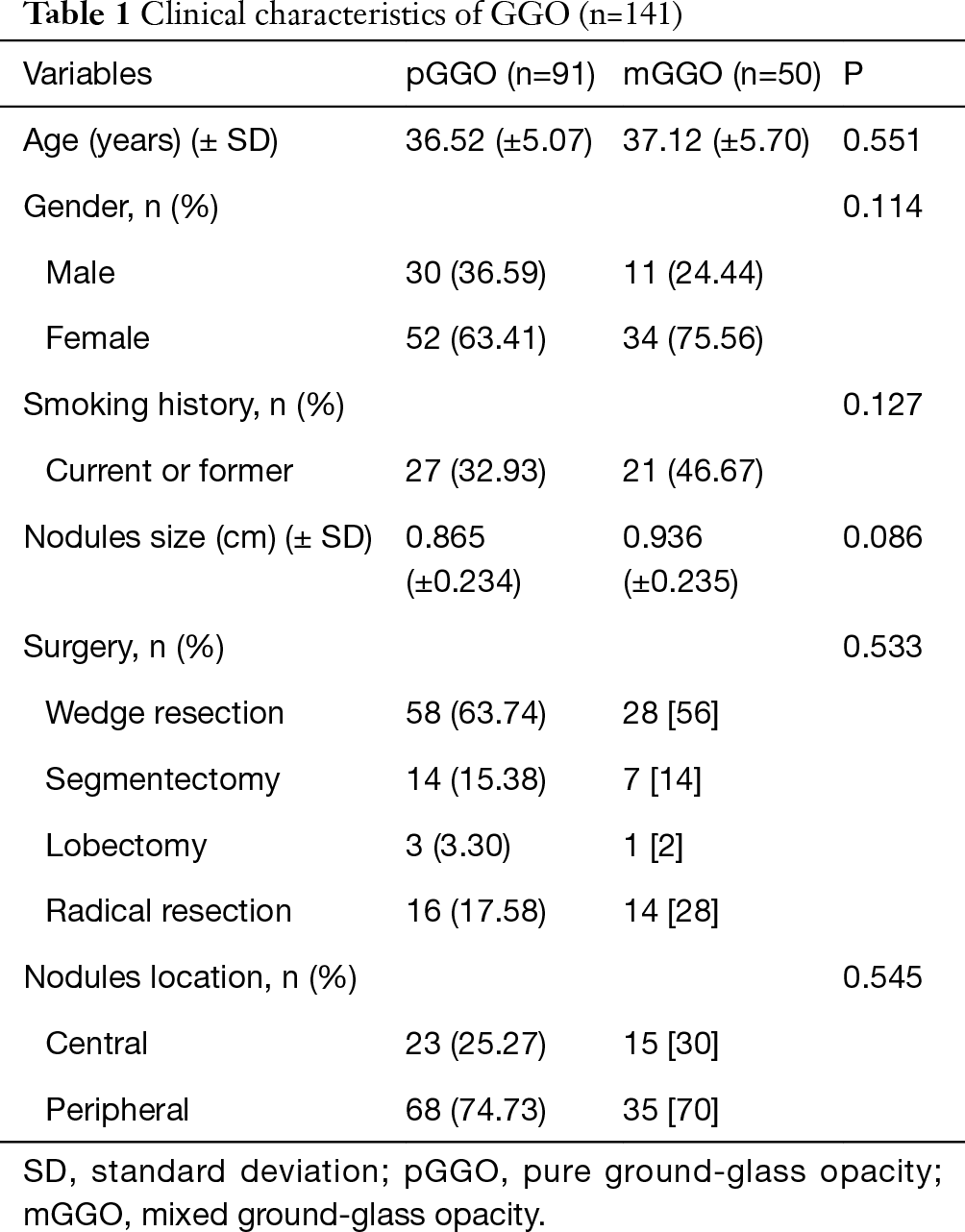 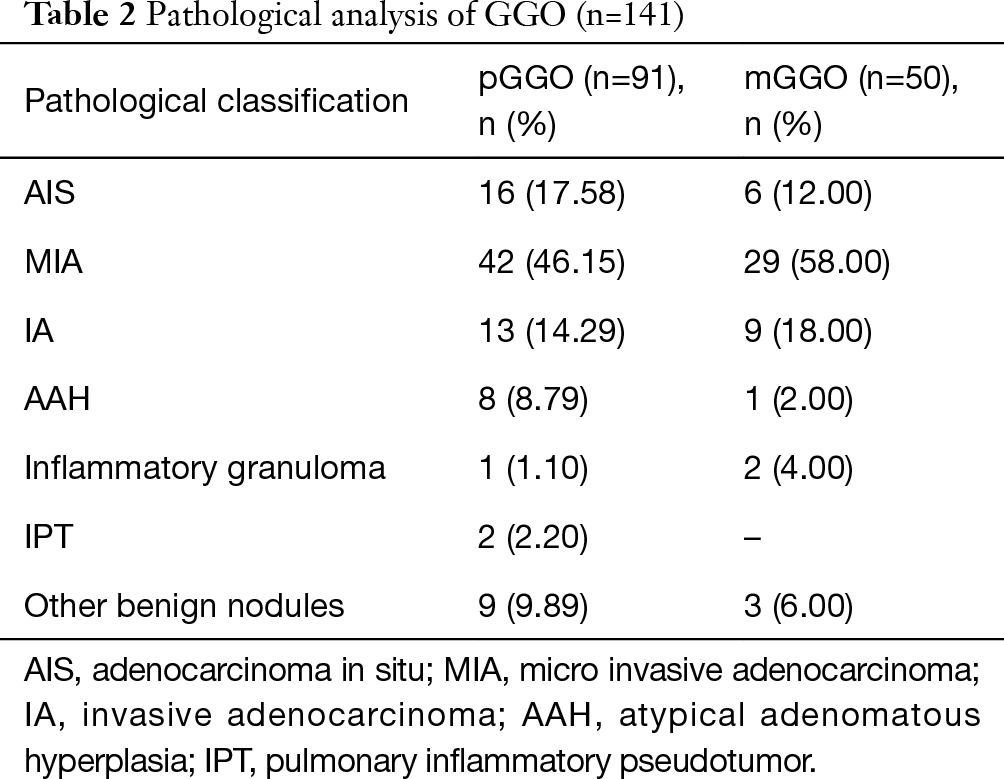 Of the 127 patients, at the end of the follow-up, 9 (7.09%) patients were lost. Finally, 118 patients were enrolled in this postoperative follow-up study, including 75 pGGO patients and 43 mGGO patients. The rates of perioperative complications and long-term complications were 6.30% and 7.63%, respectively. Two (1.57%) cases had pneumonia, 1 (0.79%) case had infection, 4 (3.15%) cases had prolonged air leak and 1 case (0.79%) had chylothorax during perioperative period. Four (3.39%) cases had chronic pain and 5 (4.24%) cases had chronic cough during the postoperative followed up period. The complications resolved through 1–3 months of symptomatic treatment. The routine pathology showed that all nodules have no lymphatic invasion. Pleural invasion was present in 3 cases (2.36%). The cases with visceral pleural invasion underwent adjuvant therapy. None of the patients with GGO experienced a recurrence and death (2-year RFS, 100%; 2-year OS, 100%) (Table 4). 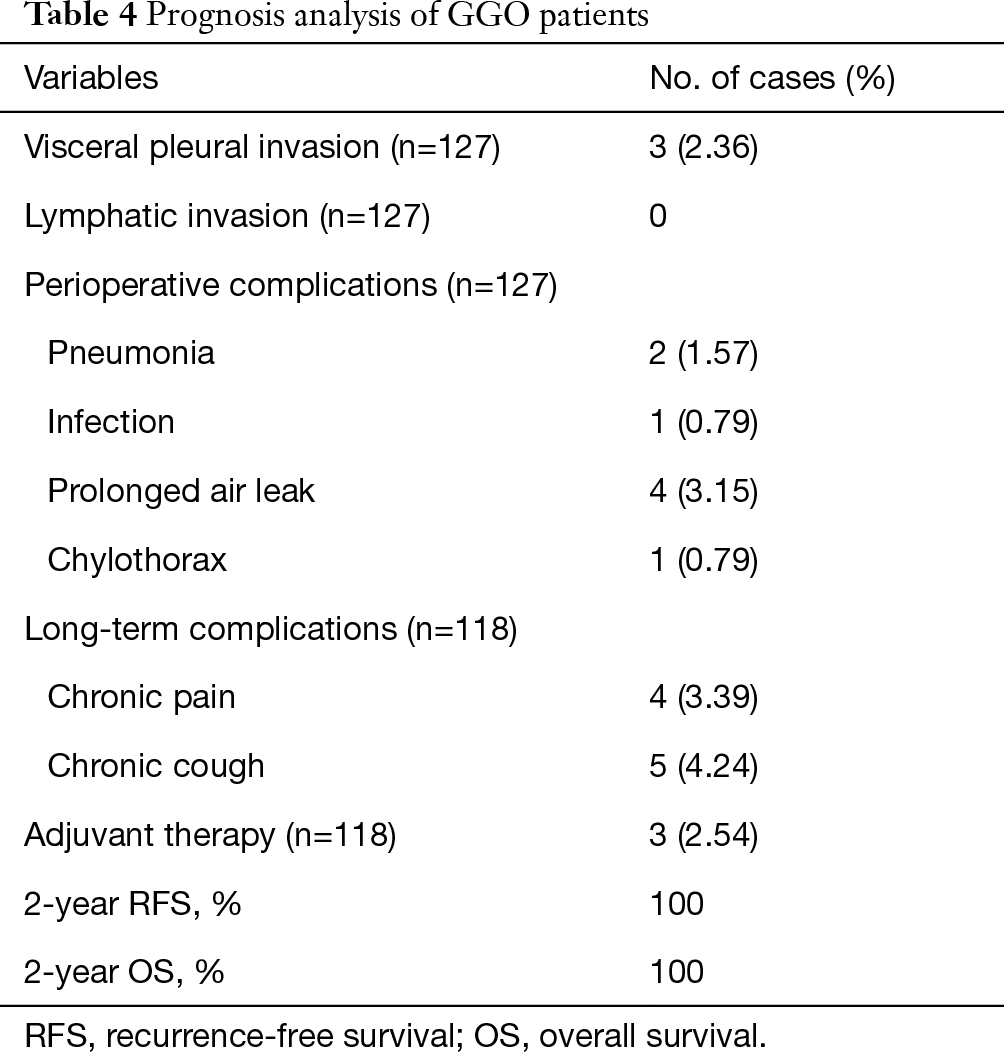 In this study, we collected the clinical data of 127 patients who underwent surgery from January 2016 to January 2017. The malignant proportions of pGGO and mGGO were 78.02% and 88.00% respectively, and the total malignancy of GGO was 81.56%. The above results were consistent with those results reported by Lee et al. (6). The ratio of MIA and IA in pGGOs were 46.15% and 14.29%, while the ratio of MIA and IA in mGGOs were 58.00% and 18.00%. Specifically, the mean percentages of MIA and IA were higher in mGGOs. Although the statistical results showed that there was no significant correlation between imaging type (pGGO and mGGO) and benign and malignant, it was undeniable that mGGO was more easily infiltrated. mGGOs on chest CT scannings were often highly suggestive of lung adenocarcinoma (12). This gives us inspiration for the diagnosis and surgical treatment of GGO in young patients in the future. It is necessary to comprehensively consider imaging changes such as lobulation, burrs, vascular bundle signs, etc. We should consider surgical treatment as early as possible if the size or solid component is gradually increasing during the preoperative follow-up period (13-16). It was believed that GGO in young patients receiving VATS has a large proportion of malignant, and early surgical intervention for the patients was necessary.

Regarding the risk assessment and treatment strategy of GGO, the Chinese diagnosis and treatment guidelines for non-solid nodules of the lungs were released in 2016. The Fleischner Society Guidelines for Pulmonary Nodules were updated in 2017, the latest guide mentioned (17): subsolid nodules <6 mm do not usually require routine follow-up. pGGO ≥6 mm, CT at 6–12 months to confirm persistence, then CT every 2 years until 5 years. If solid component or growth develops, consider resection. mGGO ≥6 mm, CT at 3–6 months to confirm persistence. If unchanged and solid component remains <6 mm, annual CT should be performed for 5 years. Persistent part-solid nodules with solid components ≥6 mm should be considered highly suspicious. Multiple <6 mm pure ground-glass nodules are usually benign, but consider follow-up in selected patients at high risk at 2 and 4 years. Use most suspicious nodule as guide to management if nodule ≥6 mm.

Some scholars have reported cases of lymph node metastasis, but the proportion was extremely low (18,19). Zhang’s research showed that lymph node metastasis did not occur in early lung adenocarcinomas containing GGO components ≥50% (20). Chinese lung cancer experts reached a consensus in 2018, they held that lymph node dissection or sampling was unnecessary if the rapid pathology examination presenting as AAH, AIS or MIA (21). In this study, we did not perform lymph node treatment for rapid pathology examination presenting as AAH and AIS. Lymph node sampling was performed on MIA, and systemic lymph node dissection was performed on IA. The results showed that none of the lymph nodes had been metastasized. We followed the American Joint Committee on Cancer (AJCC) that it was recommended to clean or sample more than six mediastinal lymph nodes in three groups, including at least 7th sets of lymph nodes (22). The routine pathology examination showed that all nodules had no lymphatic invasion.

There was no international consensus on the resection range and surgical methods of GGO. It was the current consensus to determine the next treatment according diagnosed by frozen section analysis during the operation (18,23,24). Tsutani retrospectively analyzed the clinical data of 610 GGO patients diagnosed by conventional pathology in stage IA, and thought T1a patients were able to undergo wedge resection, and T1b patients may be considered for segmental resection (25). In the same period, there were reports at home and abroad: for IA stage non-small cell lung cancer patients, the thoracic segmentectomy and lobectomy had similar postoperative survival rates (24,26,27), both close to 100%. There were no significant differences between subarachnoidectomy and lobectomy in survival rates (23,28). Moon thought lobectomy may not be the best treatment option, limited removal of all GGO cases may be a reasonable choice regardless of the histological morphology of early adenocarcinoma (29,30). Although the arguments were different, it was undeniable that the advantage of segmentectomy was that the nodules can be removed while retaining normal lung tissue maximally. Especially for central nodules, the advantage of segmental resection can avoid the loss of lung function to the most extent that caused by direct lobectomy, reduce the incidence of perioperative pulmonary complications and facilitate postoperative recovery (31). At present, foreign multi-center randomized controlled clinical trials on the scope of early lung cancer resection are underway (32). It is believed that the most objective conclusions will be used to standardize the standard surgical methods for GGO surgical treatment.

Several studies showed that the 5-year survival rate of malignant tumors reached 100% (23-25,33). In this study, all patients after surgery were followed up for 24–36 months, 2-year RFS and 2-year OS both were 100% except 15 (11.8%) patients were lost. Eight cases (6.30%) had complications such as pneumonia, infection, prolonged air leak and chylothorax during perioperative period. Nine cases (7.63%) underwent chronic pain or chronic cough during postoperative follow-up period. The complications resolved through 1–3 months of symptomatic treatment. We have reason to believe that VATS is suitable for GGO in young patients. However, it should not be overlooked that the true prognosis may be different from the results of this study due to. Therefore, it is necessary to continue follow-up.

This study has several limitations that should be considered. First, this is a retrospective review conducted at a single centre. The patient sample is relatively small. Of course, we have reason to believe that more accurate results could be obtained if the analysis and comparison were made with a larger patient sample. Second, we obtain the data from a single institution. Finally, long-term postoperative follow-up is not conducted, which could provide a more detailed analysis of the recurrence rate and mortality.

In conclusion, the GGO in young patients that received VATS has a high proportion of malignant, its prognosis were satisfied. During the preoperative routine follow-up, it is necessary to actively perform surgical intervention and remove the nodules when the diameter of the nodules and solid component gradually increases, or the malignant imaging features appear on the chest HRCT scannings.

Ethical Statement: This retrospective study was approved by the First Affiliated Hospital of Soochow University.