The evaluation and correction of macrocriculatory and microcirculatory flow play an important role in the resuscitation of circulatory shock (1). The venous-to-arterial carbon dioxide difference [P(v-a)CO2] has gained great attentions in the resuscitation of sepsis. The P(v-a)CO2 is determined by cardiac output and metabolic status, and it has been taken as an indicator of the adequacy of the venous blood ﬂow to remove the CO2 produced by the peripheral tissues (2,3).

The P(v-a)CO2 was calculated as the difference between venous PCO2 and arterial PCO2. The venous PCO2 could be obtained from the mixed venous blood through a pulmonary artery catheter or from the central venous blood through a central venous catheter. Researches (4,5) had shown that central venous-arterial PCO2 difference [P(cv-a)CO2] was consistent with mixed venous-arterial PCO2 difference [P(mv-a)CO2] and both of them were inversely related to cardiac index (CI). Nowadays, the central venous PCO2 is commonly used to calculate P(v-a)CO2 in clinical practice. Recent study found that P(mv-a)CO2 might be a potential indicator to reflect microcirculatory flow in septic shock patients (6). In this paper, we review the literatures of P(v-a)CO2 and try to answer the question how to interpret and manage the P(v-a)CO2 in the resuscitation of sepsis.

P(v-a)CO2 and prognosis in sepsis

There were some potential pitfalls of using P(v-a)CO2 to identify global flow and tissue perfusion in clinical situations.

Both ScvO2 and lactate have been well accepted as targets to guide resuscitation in sepsis (22). However, sometimes there might be some limitations in using ScvO2 and lactate to reflect tissue perfusion (23). For example, when capillary shunting occurred, ScvO2 could be elevated and mask the presence of tissue hypoperfusion or tissue hypoxia. Recently, P(v-a)CO2 has gained attention as a complementary tool to reflect global perfusion in the resuscitation of septic shock patients when ScvO2 is more than 70% (24).

Ospina-Tascon et al. (25) conducted a prospective study involving 75 septic shock patients with the aim to investigate the relationship between P(mv-a)CO2 and sublingual microcirculation assessed by sidestream dark-field device. They found that high P(mv-a)CO2 values were associated with low percentages of small perfused vessels (PPV), low functional capillary density, and high heterogeneity of microvascular blood flow. Interestingly, the relationship between P(v-a)CO2 and microcirculation was independent of the effects of cardiac output in that study. In summary, a high P(v-a)CO2 might be caused by an inadequate microcirculatory flow to clear the excess CO2 production, even in the presence of normal (or high) cardiac output in septic shock patients. Moreover, Kanoore et al. (26) found sepsis patients with a high CI (>4 L/min/m2) showed a lower P(v-a)CO2 (5±3 vs. 7±2 mmHg) than those with normal cardiac output. However, there were no differences in sublingual perfused vascular density, proportion of perfused vessels, or microvascular flow index in both groups in that study. Hence, an impaired microcirculation could be persistent even in a low P(v-a)CO2 and a high cardiac output condition. The loss of coherence between macrocirculation and microcirculation is common in septic shock patients (27). Importantly, it is uncertain if the decrease in P(v-a)CO2, observed after an increase in cardiac output, is related to the improvement of microcirculation. Further studies are needed to investigate this issue. 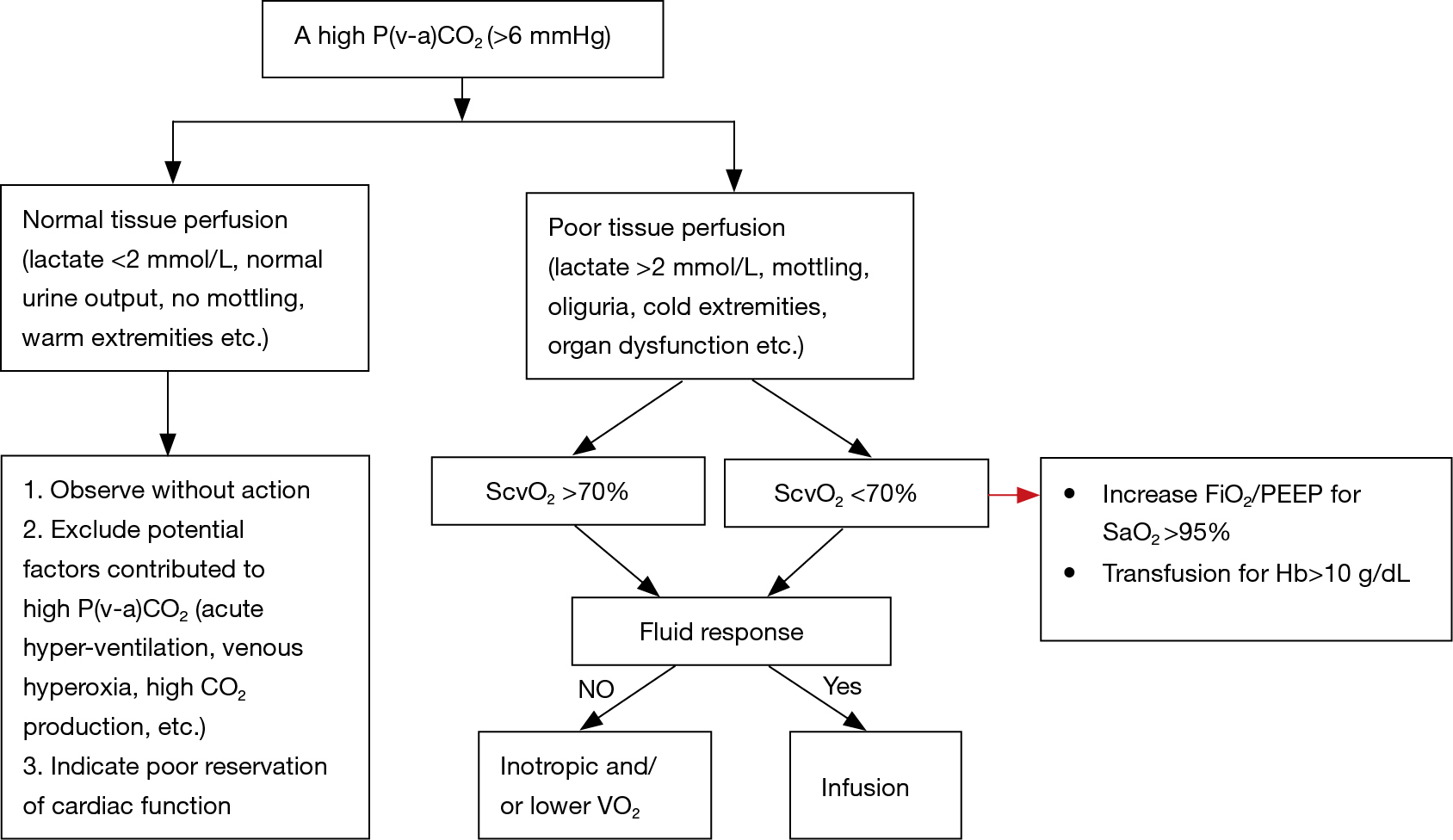 Funding: This work was supported by the Fundamental Research Funds for the Central Universities (NO. 3332018010).