Defining the role of adjuvant radiotherapy for malignant pleural mesothelioma: a propensity-matched landmark analysis of the National Cancer Database

Malignant pleural mesothelioma (MPM) is an aggressive and rapidly fatal malignancy. Median survival after diagnosis is short, approximately ten months (1). Trimodality therapy offers the best chance to prolong survival, with several phase II studies showing medial survival as high as 36 months (2-5). Adjuvant radiation, arguably a critical component of multi-modality therapy for mesothelioma, has been demonstrated to be associated with significantly improved local control (6). However, the importance of optimizing local control has not been clearly demonstrated, with many patients nonetheless still succumbing to distant disease. A recent phase II trial showed no improvement in locoregional relapse-free survival after randomizing 54 patients to adjuvant hemithoracic radiotherapy (7). However, a major limitation of this randomized trial remains whether the study was adequately powered.

The purpose of this analysis was to evaluate a large, prospectively maintained nationwide oncologic outcomes database to assess whether adjuvant radiation after cancer-directed surgery for MPM was associated with improved survival. We defined adjuvant radiation as that involving intensity-modulated radiation therapy (IMRT) or conformal 3D radiotherapy. To reduce the risk of treatment selection bias and immortality bias, we used propensity matching with a landmark analysis.

The National Cancer Database (NCDB) is a joint project of the Commission on Cancer (CoC) of the American College of Surgeons and the American Cancer Society. The CoC’s NCDB and the hospitals participating in the CoC NCDB are the source of the de-identified data used herein; they have not verified and are not responsible for the statistical validity of the data analysis or the conclusions derived by the authors. The NCDB uses de-identified data and has been deemed exempt from MD Anderson Cancer Center Institutional Review Board oversight.

A query of the NCDB Participant User File from 2004 to 2013 was performed using mesothelioma as the site code. Patients who were selected for analysis were those who had histologically confirmed MPM who underwent cancer-directed surgery without neoadjuvant or intraoperative radiotherapy.

Cancer-directed surgery was defined as one of the following SEER site-specific codes: [30] simple/partial surgical removal of the primary site; [40] total surgical removal of the primary site; [50] surgery stated to be debulking; [60] radical surgery, according to previously described methods (8). Chemotherapy was defined as any combination of single or multi-agent chemotherapy. Patients who were coded as having undergone therapy with palliative intent were allowed as having undergone treatment. Time zero was defined as the date of definitive surgery. The 6th or 7th edition of the AJCC staging criteria was used to define pathologic stage. ICD-O-3 histology codes were used to define histologic subtype.

To address missing staging information, pathologic data from other fields was used to enter summary staging data for those for whom the summary stage field was missing. For example, all patients recorded as pT4 with missing summary stage were recoded to stage IV according to the 7th edition of the AJCC staging criteria. Furthermore, patients who were recorded to have surgically resected regional lymph nodes examined by the pathologist and negative were recoded as pN0. Patients who had T-status defined by the SEER data fields (CS_EXTENSION) and were notated to be entered either by operative or post-operative pathologic detail (CS_TUMOR_SIZEEXT_EVAL) were used to inform pT status. Patients with missing pM status (2,536/2,633 records) were assumed to be pM0. This data imputation using pathologic data from other fields revealed the following additional staging information: 9 pStage 1; 22 pStage 2; 44 pStage 3; 111 pStage 4.

Chi-squared was used to compare frequency of categorical variables. Cochrane-Armitage test was used to evaluate for trends in adjuvant radiation utilization during the study duration. To address treatment selection biases, a propensity matched analysis was performed. The propensity score towards receiving adjuvant radiation was estimated using logistic regression. The following variables were used to calculate the propensity score: age, Charlson comorbidity score, sex, insurance status, facility type, histology, pathologic stage, neoadjuvant chemotherapy, race, and margin status. One:1 matching was performed using the propensity using the nearest neighbor technique without replacement. Maximum allowed caliper was 0.02. Diagnostic tests are shown in Figures S1 and S2 and indicate standardized mean differences less than 10% after matching. Among the propensity matched cohort, a landmark analysis was used to mitigate an immortal time bias. An immortal time bias is when radiotherapy patients by definition survived long enough to receive radiotherapy, conferring an “immortal” period during this period for radiotherapy patients alone. With the landmark, analysis was restricted to those who survived to 150 days without death or loss to follow-up. Sensitivity analysis exploring other landmarks was performed, including 90, 120, and 180 days. 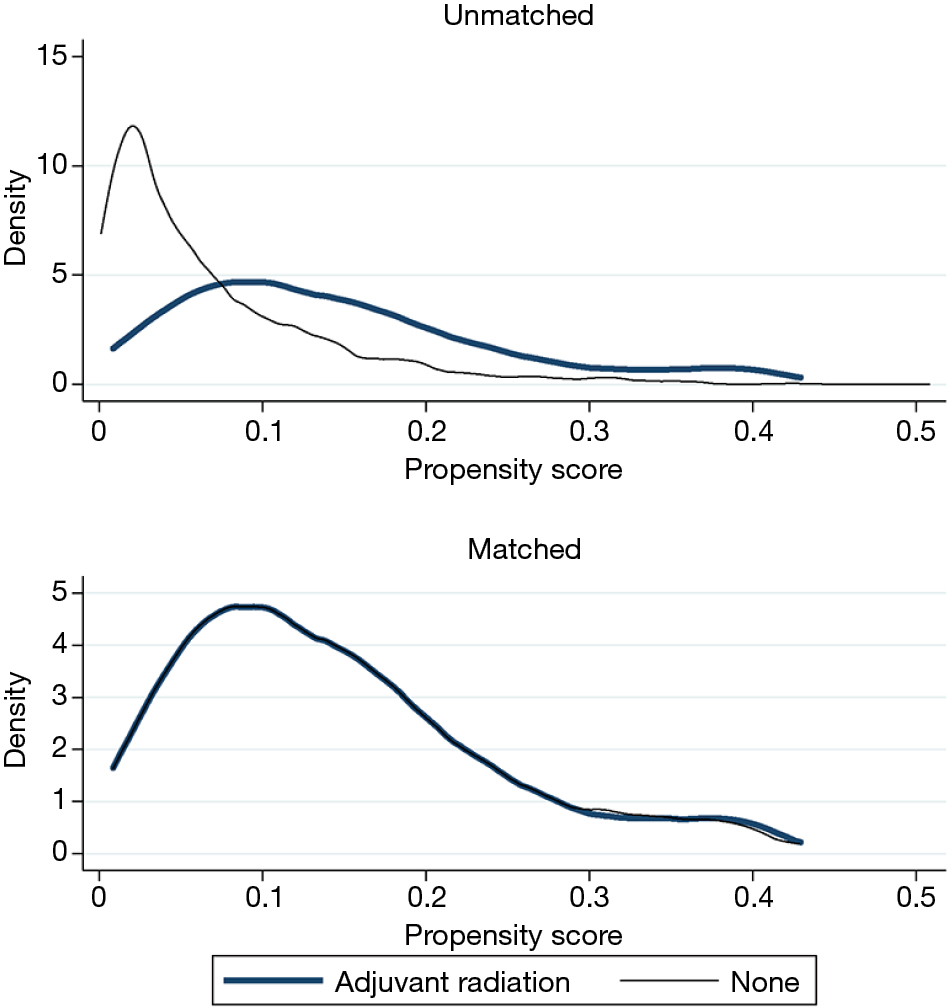 Figure S1 Kernel density plot before and after match. 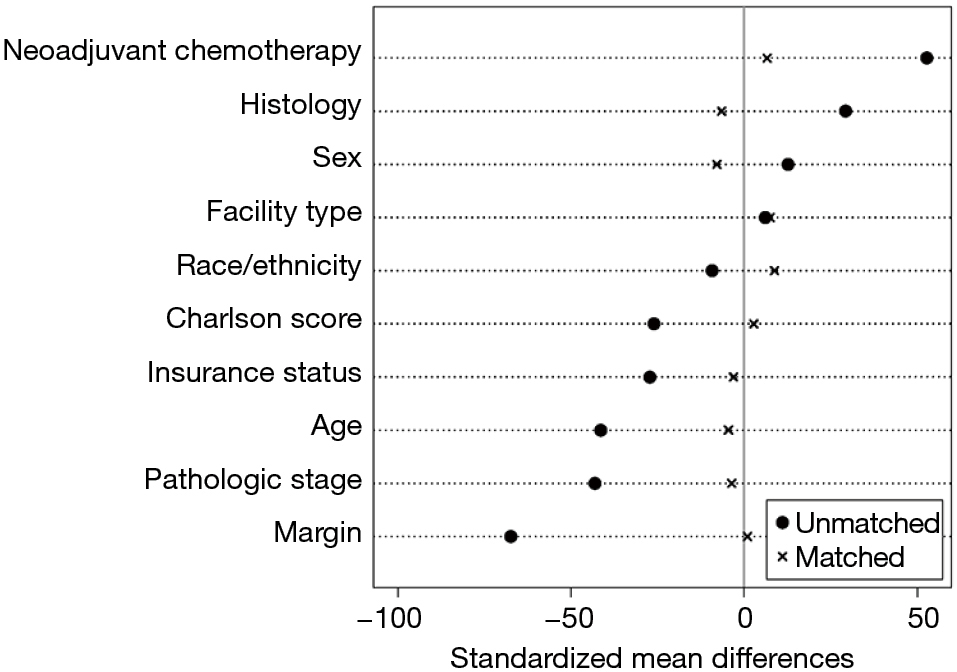 Figure S2 Standardized mean differences before and after match.

Kaplan-Meier method with log-rank test was used to compare survival differences. A cox regression model was used to calculate the hazard for overall survival. Variables with P<0.25 on univariable or those of clinical interest were used to create a multivariable model. The final multivariable model included an interaction term between pathologic stage and adjuvant radiation. The hazard ratio for adjuvant radiation for each pathologic stage for the multivariable model was calculated using the marginal effect. All tests were two-sided and considered statistically significant for P<0.05. All statistics were performed using STATA version 14.2 (College Station, TX, USA). 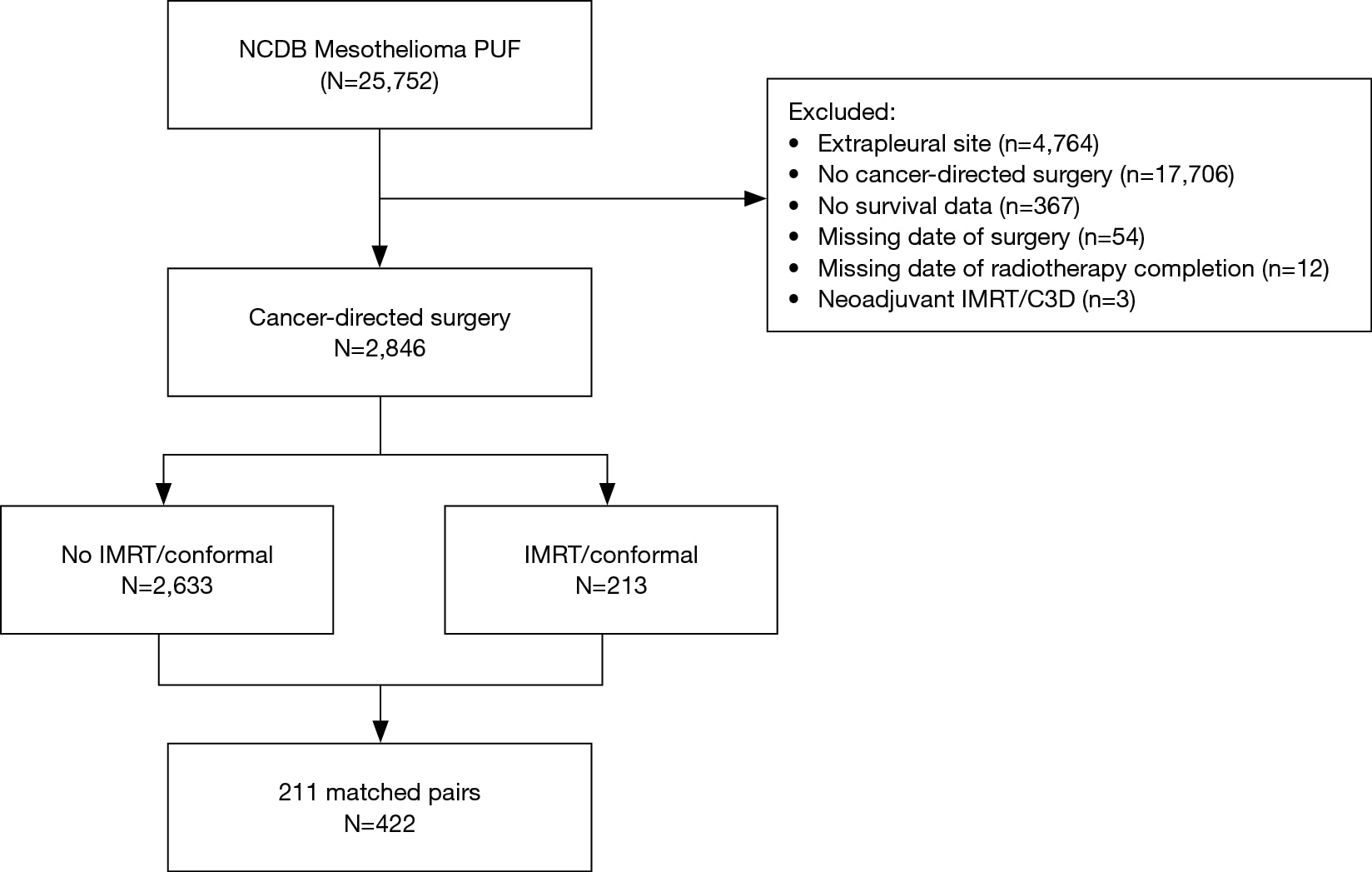 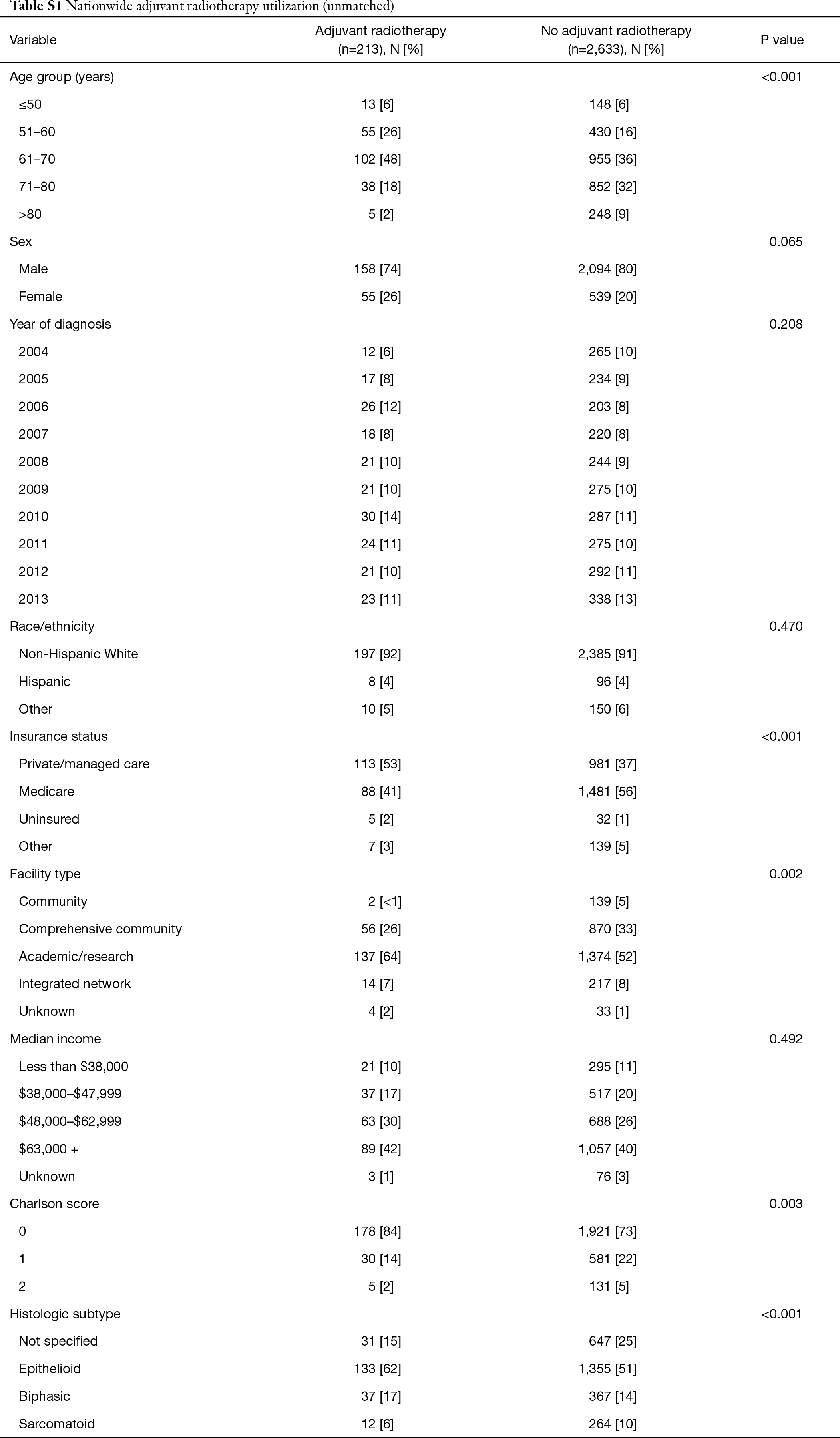 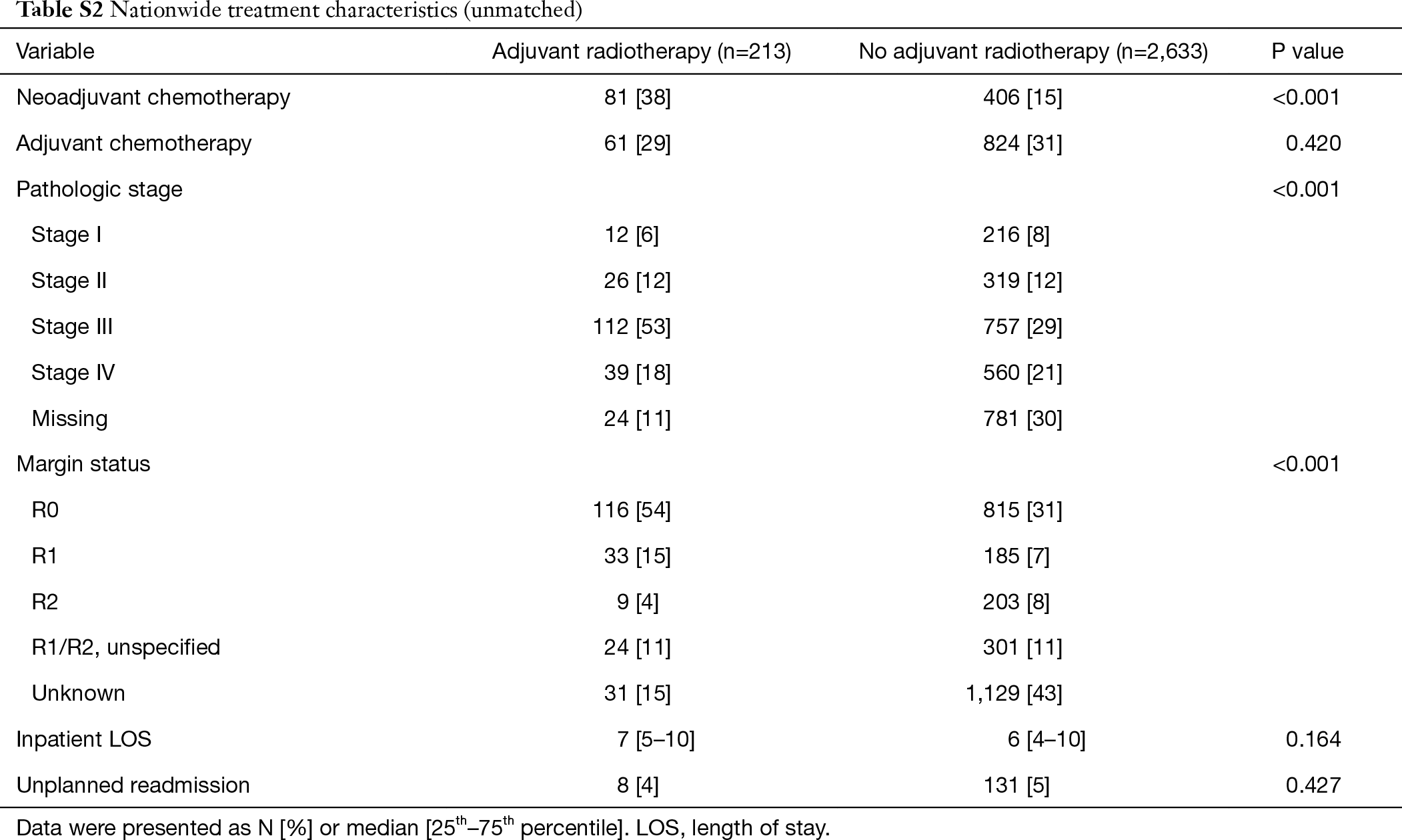 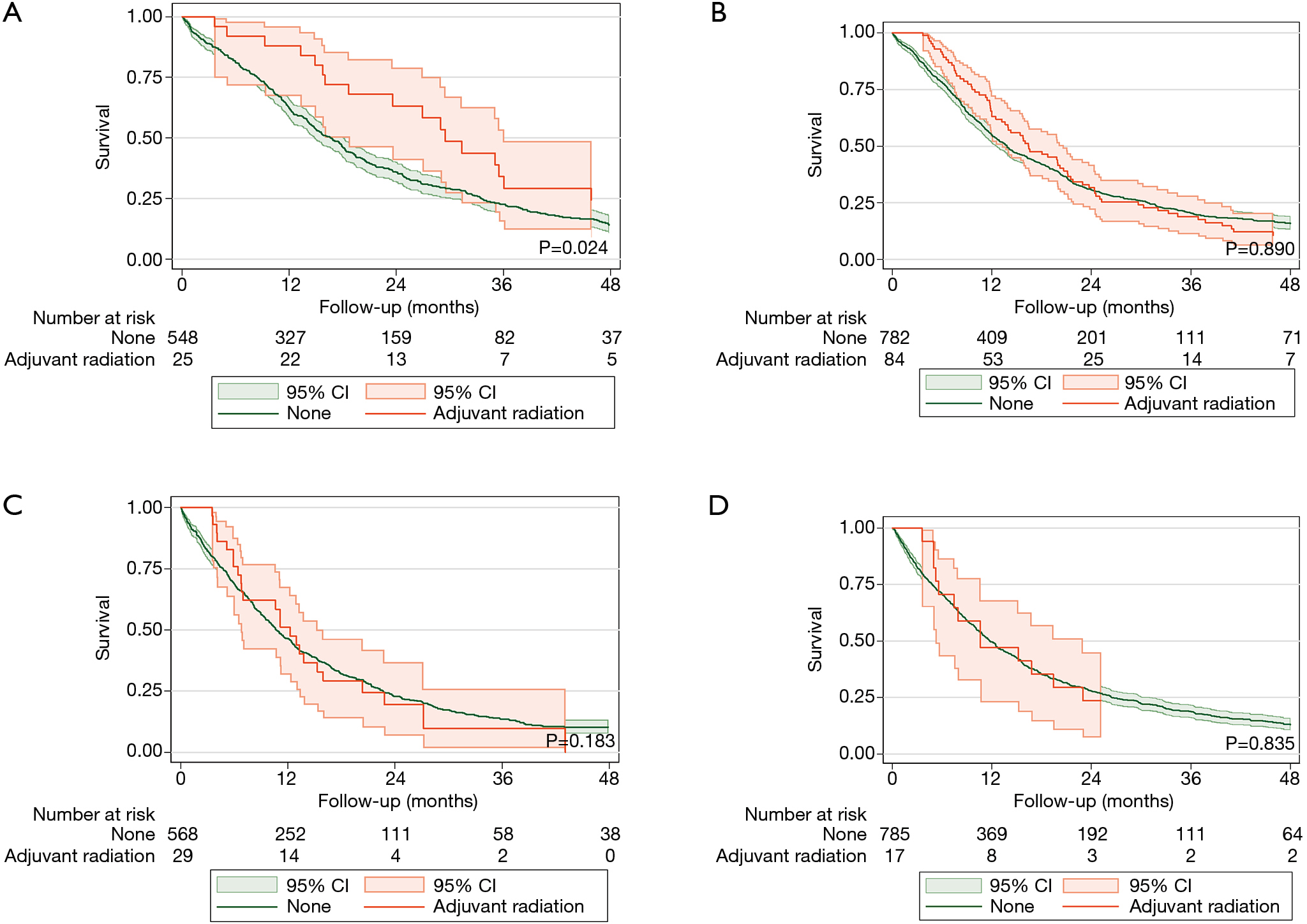 After matching, there were no clinically relevant or statistically significant differences among those who underwent adjuvant radiation and those who did not (Tables 1,2). Patients with pathologic stage I–II MPM who received adjuvant radiation were associated with improved survival (P=0.037, log-rank), an effect that was not seen with stage III or stage IV MPM (Figure 2). 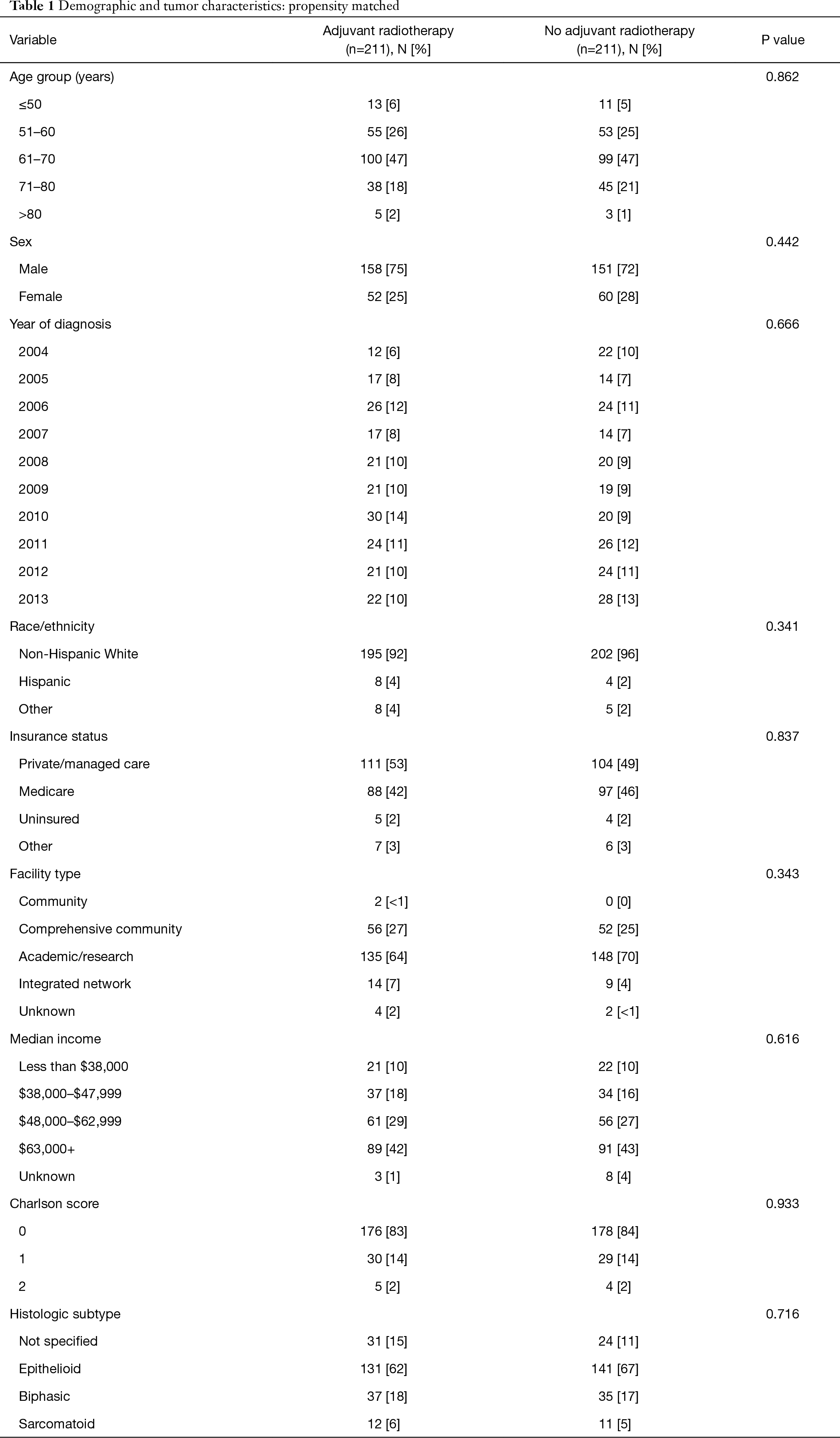 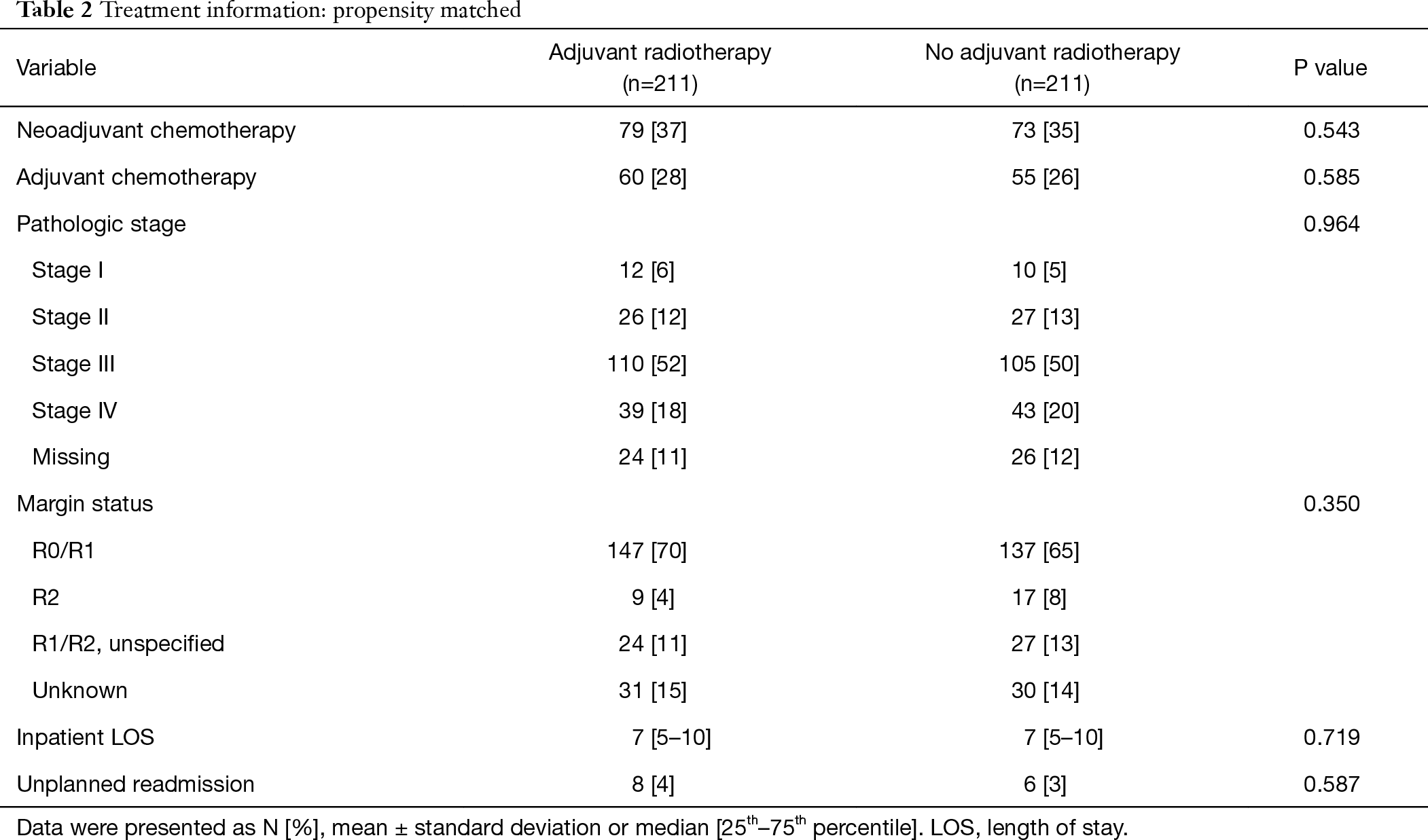 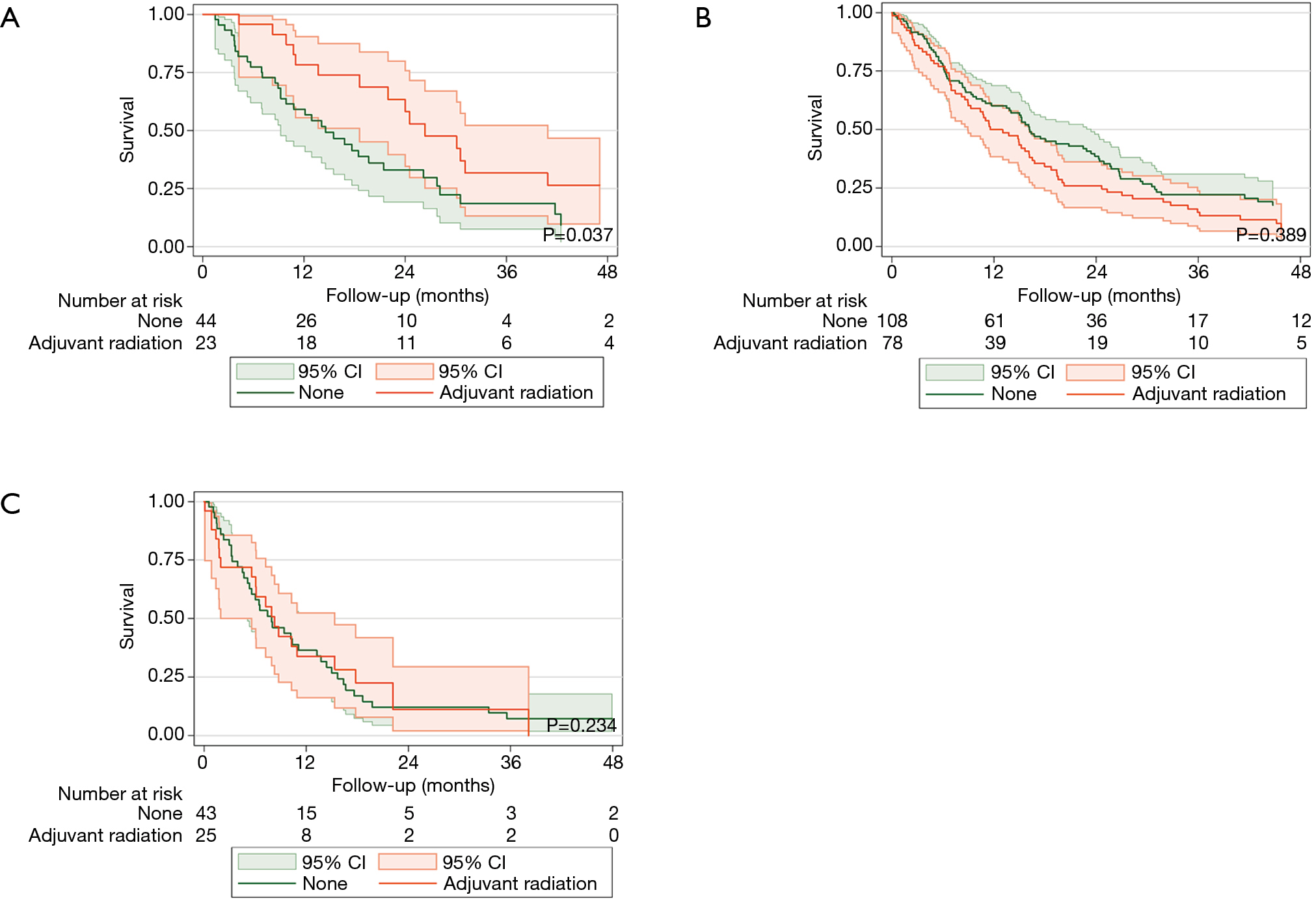 On univariable analysis, age greater than 60, Medicare insurance status, biphasic and sarcomatoid histology, and advanced pathologic stage were also associated with worse survival, with female sex showing a non-significant trend towards favorable survival (Table 3). After multivariable adjustment, biphasic and sarcomatoid histology and advanced stage disease continued to be associated with worse survival, with age greater than 60 showing clinically relevant but no longer statistically significant differences. Furthermore, adjuvant radiation continued to be an independent predictor of improved survival among patients with stage I–II disease (HR 0.52, 95% CI: 0.29–0.95, P=0.035), but not with stage III (HR 1.24, 95% CI: 0.90–1.71, P=0.190) or stage IV (HR 0.85, 95% CI: 0.49–1.48, P=0.562). We performed a subgroup analysis restricting to patients who received induction or adjuvant chemotherapy and continued to observe no survival advantage for those with stage III or IV disease who received adjuvant radiation. 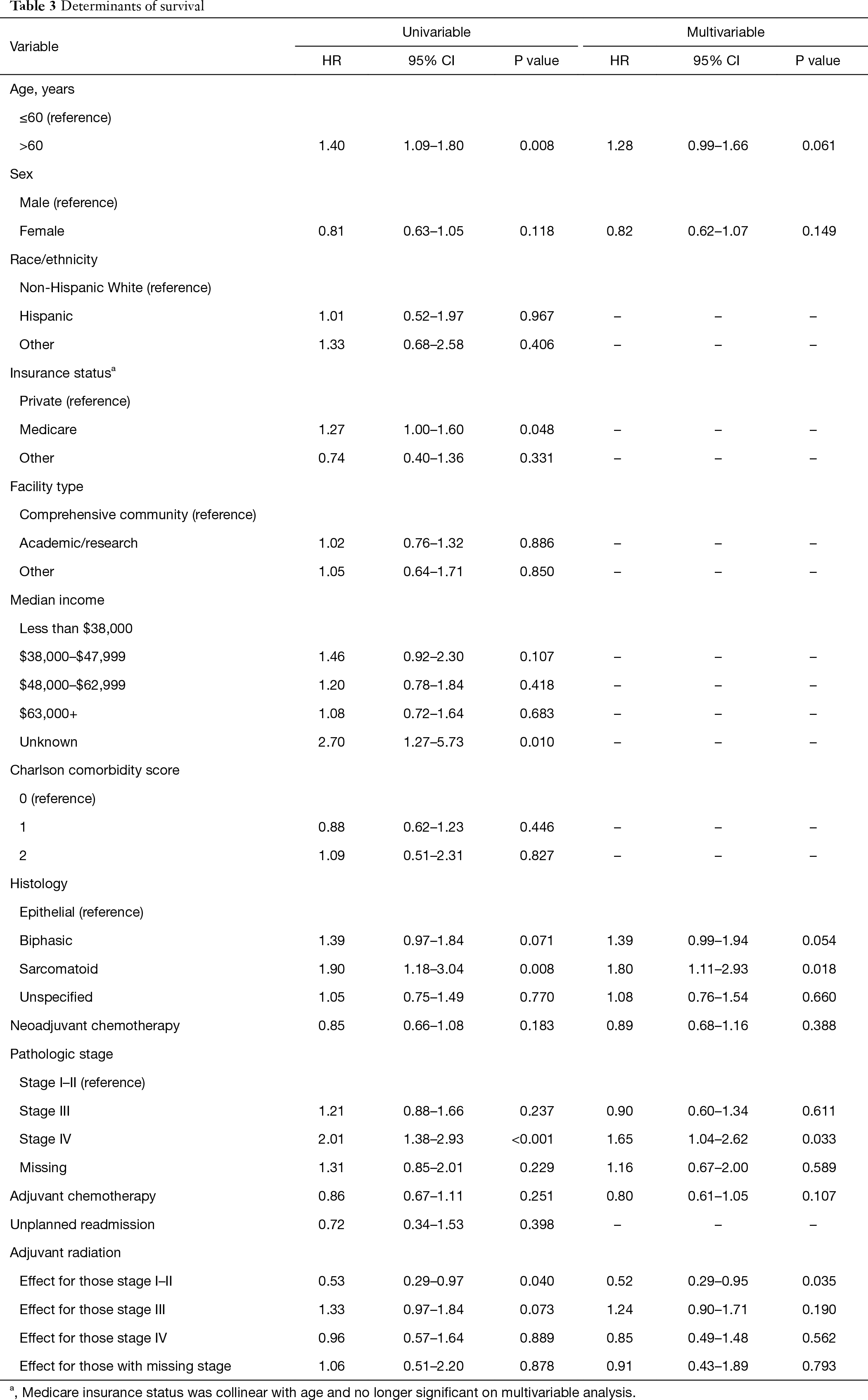 In this large nationwide series, those who received adjuvant radiation after cancer-directed surgery for pathologic stage I–II MPM were associated with improved survival relative to those who did not receive adjuvant radiation. Importantly, this survival difference was not observed for those with stage III or stage IV disease. We used propensity matching and a landmark analysis to reduce patient selection bias and to reduce survivorship bias.

The role of radiation therapy in malignant mesothelioma continues to be a challenging and intensely discussed topic. The primary challenge of delivering radiation therapy among patients with MPM are the excessively large radiation fields and associated toxicity. Therefore, adjuvant radiation has been most commonly given following extrapleural pneumonectomy (EPP), since the lung is already removed. Adjuvant radiation has been also administered following pleurectomy/decortication (P/D) with good results in expert centers (9). However, this approach is not standardized and agreed upon by mesothelioma experts, since it induces significant lung injury and essentially leads to a functional pneumonectomy over a period of time.

The SAKK 17/04 trial randomized patients to high-dose hemithoracic radiotherapy after receiving neoadjuvant chemotherapy and an EPP. After recruiting 151 patients who received neoadjuvant chemotherapy, only 113 were able to complete EPP, and among these, 54 patients were randomized to hemithoracic radiation. There were no differences in locoregional relapse-free survival or overall survival among those who received adjuvant radiation. The locoregional relapse-free survival was 9.4 months after radiation and 7.6 months among those who did not receive adjuvant radiation. Most patients (>70%) were found to be stage III or greater after EPP.

Several well-designed phase II observational trials have shown improved locoregional control with adjuvant radiation (2,6), which is believed to contribute to favorable survival after trimodality therapy (3-5,10,11). A previous report revealed that among 63 patients who received IMRT after EPP, surprisingly only 3 patients (5%) had recurrence within the irradiated field. However, distant recurrence remained an issue, being present among 33 of 61 (54%) evaluable patients. Overall, 87% of resected patients had stage III or stage IV disease. Similar results have been shown at other centers, with another phase II study showing only 3/57 (5%) patients harboring local recurrence within the margins of the irradiated field after EPP (2). As prior, most patients were stage III or stage IV and the rate of distant metastases was high.

Adding to the radiation “effectiveness” and controversy are very encouraging results of the neoadjuvant radiation trial in MPM by Cho et al. (12). In this trial, 25 patients underwent induction radiation with 25 Gy in 5 fractions followed by EPP within 8 days following radiation. This trial demonstrated unprecedented 84% cumulative 3-year survival in patients with epithelioid histology.

Our study demonstrates that the benefit of radiation therapy in adjuvant setting may be most pronounced in earlier stage. This is intuitive since radiation therapy is local modality therapy which is most likely to contribute to improved locoregional disease control. With positive nodal disease, it would be expected to encounter eventual distant disease progression.

There are several limitations to this study. Although the NCDB is a prospectively maintained nationwide registry, coding errors remain a possibility. Secondly, although we used a propensity matched landmark analysis, the possibility for residual confounding between those who were treated with adjuvant radiation and those who are not remains. Postoperative morbidity and functional status may influence the decision to proceed to adjuvant radiation, and are not tracked using the NCDB. Additionally, due to limitations with surgical coding we are unable to distinguish between an EPP and P/D within the NCDB. Although the safety and efficacy of hemithoracic radiation after P/D has been demonstrated (9,13), the possibility remains that adjuvant radiation in this nationwide study is a surrogate for those who received an EPP. Analysis of 1,494 patients from the IASLC database who underwent curative-intent surgery showed that stage I patients who received an EPP demonstrated prolonged survival (median 40 months, 95% CI: 29–58 months) relative to P/D (median 23 months, 95% CI: 20–29 months), suggesting the importance of EPP for early stage disease (14). Thirdly, using a landmark analysis, deaths attributable to radiation that occurred before the landmark (150 days post-resection) will be excluded. Strengths of this study include its large nationwide registry as well as detailed radiotherapy, chemotherapy, oncologic and medical comorbidity information.

In conclusion, we show that adjuvant radiation was associated with improved survival after cancer-directed surgery for early stage MPM. No survival advantage was observed among those with advanced stage disease. These encouraging results should prompt further efforts towards investigating radiotherapy for MPM, especially among those with early stage MPM. Currently, there is a major ongoing effort by the IASLC and Mesothelioma Applied Research Foundation to consolidate therapeutic strategies for MPM. Since randomized trials in mesothelioma are difficult to run, even single arm and or registry trials would be a step forward in the comprehensive management of this lethal disease

This study was funded by generous philanthropic donations from the Mason Family and Anonymous donors as well as departmental support.