Streptococcus pneumoniae is a Gram-positive, alpha-hemolytic, aero tolerant anaerobic member of the genus Streptococcus (1). A significant human pathogenic bacterium, S. pneumoniae was recognized as a major cause of pneumonia in the late 19th century, and is the subject of many humoral immunity studies (2).

S. pneumoniae resides asymptomatically in the nasopharynx of healthy carriers. However, in susceptible individuals, such as elderly and immunocompromised people and children, the pathogen can spread to other locations and cause disease. S. pneumoniae is the main cause of community acquired pneumonia and meningitis in children and the elderly, and of septicemia n HIV-infected persons (3).

Streptococcus pneumoniae is a major cause of diseases such as pneumonia, meningitis and sepsis, though each of these diseases is also caused by other organisms. In the developed world, serious disease occurs mainly in children below 2 years of age and in the elderly. In developing countries, the disease is common in children under 2 years, including newborn infants; rates of the disease in the elderly population are largely unknown (4).

Diagnosis is generally made based on clinical suspicion along with a positive culture from a sample from virtually any place in the body. An ASO titre of >200 units is significant. S. pneumoniae is, in general, optochin sensitive, although optochin resistance has been observed (5).

The microbiological diagnosis made microscopically and culturally. Pneumococci can be well on blood agar plates or in liquid culture media containing blood cultured. However, the period between sample collection and processing be as short as possible, because the cause of the pneumococcal autolytic enzyme system for the rapid death of the pathogen (6).

LAMP is a relatively new DNA amplification technique, which due to its simplicity, ruggedness, and low cost could provide major advantages. In LAMP, the target sequence is amplified at a constant temperature of 60-65 °C using either two or three sets of primers and a polymerase with high strand displacement activity in addition to a replication activity. Typically, four different primers are used to identify six distinct regions on the target gene, which adds highly to the specificity (7). Due to the specific nature of the action of these primers, the amount of DNA produced in LAMP is considerably higher than PCR based amplification. The corresponding release of pyrophosphate results in visible turbidity due to precipitation, which allows easy visualization by the naked eye, especially for larger reaction volumes or via simple detection approaches for smaller volumes (8). The reaction can be followed in real-time either by measuring the turbidity or the signals from DNA produced via fluorescent dyes that intercalate or directly label the DNA, and in turn can be correlated to the number of copies initially present. Hence, LAMP can also be quantitative (9). While LAMP is widely being studied for detecting infectious diseases such as tuberculosis, malaria, and sleeping sickness in developing regions, it has yet to be extensively validated for other common pathogens. Our study is to establish a real time LAMP for the diagnosis of Streptococcus pneumoniae.

Streptococcus pneumoniae ATCC 49619 was kindly provided by Professor Jia-Yun Liu of the Fourth Military Medical University. The genomic DNA was subjected to serial 10-fold dilutions in sterilized distilled water to produce concentrations ranging from 0.3 ng/uL to 3,000 ng/mL and assess the correlation between time to amplification and amount of target DNA. In addition, to evaluate the specificity of real-amp, DNA extracts from the array of bacterial species were tested.

The real-amp method was performed using the commercially available DNA thermostatic amplification kit (Guangzhou Diao Bio-technology Co., Ltd., Guangdong, China) following the manufacturer’s instructions. Reactions were performed in 25 mL total volume containing 26 reaction buffer (40 mm Tris-HCl PH 8.8, 20 mm KCl, 16 mm MgSO4, 20 mm (NH4)2SO4, 0.2% Tween-20, 0.8M Betaine, 2.8 mm of dNTPs each), 0.5 mL of a 1:100 dilution SYBR green I (Invitrogen), 0.2 mm of each outer primers of F3 and B3, 1.6 mm of each inner primers of FIP and BIP, 0.8 mm of loop primer of LB, and 8 units of Bst polymerase (New England Biolabs, Ipswich, MA). DNA amplification was carried out at 63 °C for 60 minutes using the ESE-Quant Tube scanner which was set to collect fluorescence signals. The ESE-Quant Tube scanner used in this study was developed by a company (QIAGEN Lake Constance GmbH, Stockach, Germany). This device has an eight tube holder heating block with adjustable temperature settings and spectral devices to detect amplified product using fluorescence spectra. The unit is completely portable and can be operated with a Li-Ion rechargeable power pack without external power supply. A small liquid crystal display (monitor) is available to display the results (as positive or negative) without the need of a computer. However, the device can also be used together with a computer to generate real time amplification plots as the reaction progresses. In this study, each sample was tested three times.

Real-amp primers designed in this study

The target selection for primer design can be accomplished by using the Primer Explorer (http://Primer Explorer.jp/e/v4manual/Index.html). The primer specificity was checked using the basic local alignment search tool (BLAST) against human DNA and other Streptococcus sequences in the nonredundant GenBank database. And the primers used in this study listed in Table 1.

Table 1 Sequences of primers F3, B3, BIP and LB used in the real-amp assay
Full table 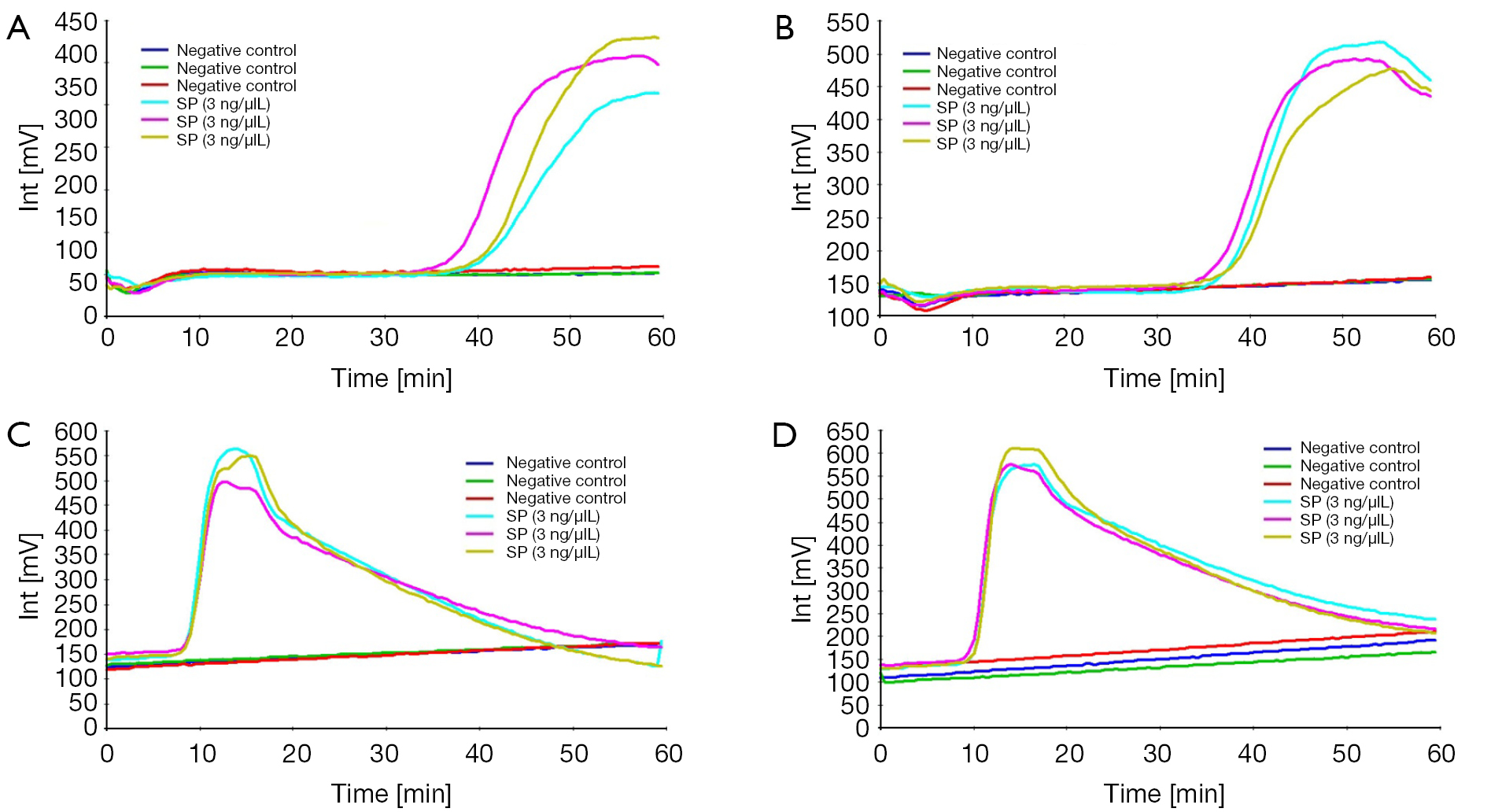 Sensitivity of the real-amp method

The limits of detection of real-amp were determined using DNA obtained from Streptococcus pneumoniae ATCC 49619. The DNA was diluted from 0.3 or 3 to 3,000 pg/uL. This assay required at least 300 to 3,000 pg/uL for the detection of Streptococcus pneumoniae ATCC 49619. The fluorescence peak typically persisted for about 10 minutes (Figure 2A). More time for amplification was required for samples with lower DNA concentration although no clear correlation was observed between time to amplification and the DNA concentration. 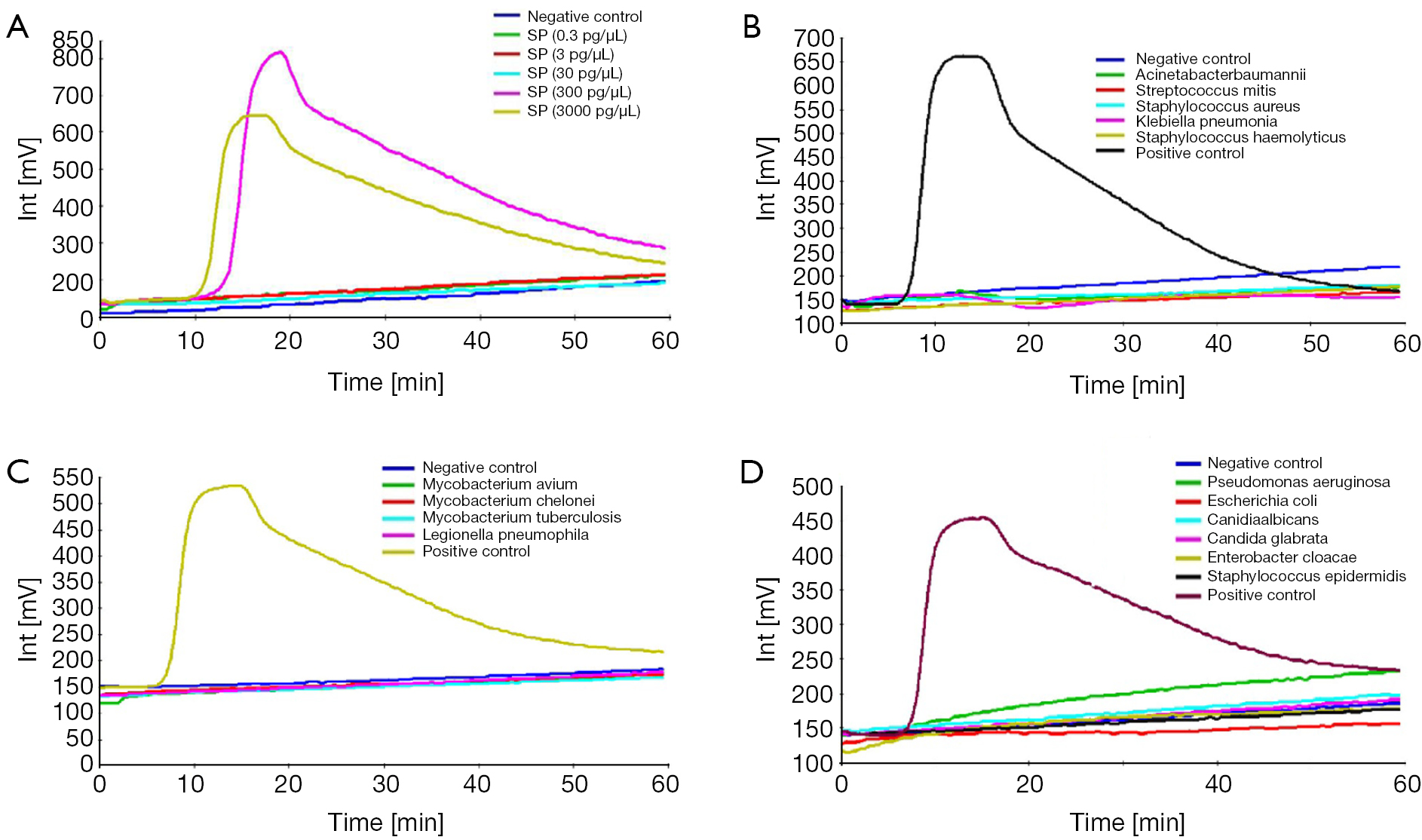 Specificity of the real-amp method

Clinical sputum samples were first identificated by VITEK 2 system, and then assessed by real-amp established in this study.

Repeatability of the real-amp method

The results showed that the repeatability of the real-amp method is good (Figure 3). 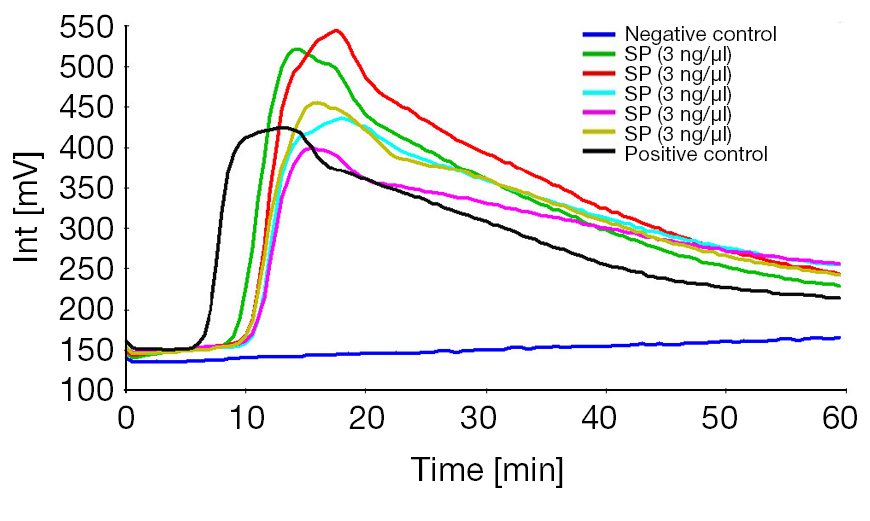 Figure 3 Repeatability of the real-amp method.

In recent years, molecular biology, especially LAMP, has become the most valuable technology for clinical microbiology diagnosis (10-13). LAMP is an autocycling and strand displacement DNA synthesis method involving the use of the large fragment of Bst DNA polymerase and two pairs of specific inner and outer annular primers designed based on the gene sequence of different purposes. In the LAMP reaction, the design of the inner primer is capable of hybridizing to the DNA region in the target sequence, synthetizing the complementary strand, and producing a type of dumbbell-shaped DNA (14). Then this special structure use itself as a template for DNA synthesis to convert stem-loop DNA, which is the starting configuration of the LAMP cycling reaction. Because the inner primer hybridization in the ring of the stem-loop structure, so after the replacement the primer can produce a gaped stem-loop-like DNA which may be attaching target sequence (15). In the LAMP reaction process, pyrophosphate ions generated from the DNTP may bind to Mg2+ in a reaction solution, and became ivory precipitation magnesium pyrophosphate. The results also can be determined under a naked eye by adding fluorescent dye. LAMP reaction can be processed at a constant temperature by using simple devices with no need for temperature cycle, and its rapid and simple features give it an advantage over PCR (16-18).

LAMP has the potential to be used as a simple screening assay in the field or at the point of care by clinicians (16-18,24). As previously mentioned, LAMP is isothermal which eradicates the need for expensive thermo cyclers used in conventional PCR, it may be a particularly useful method for infectious disease diagnosis in low and middle income countries (10,19,20,25,26).