Shock is defined as an imbalance between oxygen delivery (DO2) and O2 demand. O2 derived parameters have been historically used as reflections of the state of organ perfusion and as targets for resuscitation (1). While such parameters, including the mixed venous oxygen saturation (SVO2) and lactic acid levels, have great clinical information, studies have shown that they fail to fully describe the clinical picture and can be deficient when assisting the clinician in deciding on the next therapeutic step (2-6). In the following review, we will address the clinical utility of integrating venous-to-arterial partial pressure of CO2 (PCO2) difference (ΔPCO2) in patients in septic shock receiving dobutamine.

Why O2 based parameters draw an incomplete picture during shock

For patients in shock, a reduced SVO2 often reflects an exaggerated O2 extraction, secondary to low DO2. When DO2 drops below a critical threshold, anaerobic metabolism is triggered and lactic acidosis ensues. While a reduced SVO2 reflects low O2 availability to the tissues, a normal SVO2 does not exclude persistent tissue hypoperfusion. This observation is explained by a heterogeneous microcirculation, capillary shunting or mitochondrial dysfunction, where SVO2 is normal or even elevated, despite hypoxia at the cellular level, and as is often seen in patients with sepsis (7). Similarly, lactic acid, while increased when tissues are under perfused and anaerobic metabolism sets in, can also be increased in other conditions, such as liver dysfunction or inflammatory induced aerobic glycolysis (8).

Our current emphasis to monitor tissue perfusion by focusing on systemic blood flow, and the usual indicators of global tissue hypoxia (such as SVO2 and blood lactate levels) can be misleading, especially when used alone. The ΔPCO2 can assist the clinician in making adequate diagnostic and therapeutic decisions.

The Fick principle as it applies to CO2

Historically, investigators described a rise in partial pressure of venous CO2 in patients in cardiac arrest or in various types of shock. This has triggered an interest in studying the ΔPCO2 in these clinical scenarios.

The Fick principle allows the determination of the cardiac output (CO) based on arterial and mixed venous O2 contents and O2 metabolism, in patients in a steady state. According to the classical equation, CO equals O2 uptake (VO2) divided by the arteriovenous O2 content difference.

This same principle of conservation of mass applies to CO2. CO2 is transported in the blood mostly as bicarbonate with a small percentage dissolved in plasma and another fraction bound to hemoglobin (Hb). PCO2 can substitute for the CO2 content over the physiologic range of PCO2, given the quasi linear relation over that range (9). This relationship can be affected by oxygenation of Hb (Haldane effect); low O2 saturation favors CO2 binding to Hb, increasing CO2 content for the same PCO2 level. Similarly, the acid base status affects carbaminohemoglobin so that metabolic acidosis increases PCO2 for the same level of CO2 content (10).

Where (PcvCO2 − PaCO2) = ΔPCO2 with PcvCO2 being the central venous PCO2, PaCO2 being the arterial PCO2, VCO2 the CO2 production by the cells, K is the pseudo-linear coefficient supposed to be constant in physiological states.

While using the Fick equation as it applies to CO2, ΔPCO2 depends on CO2 production (aerobic and anaerobic metabolism) and the CO (13).

As CO2 is produced in the peripheral tissues during metabolism, the venous CO2 content and venous PCO2 are higher than their arterial values. Under normal physiological conditions, ΔPCO2 ranges between 2 and 6 mmHg (14).

The relationship between metabolism and ΔPCO2 is complex. When patients develop shock and a low CO state, DO2 drops. Initially aerobic metabolism is maintained, VO2 remains constant as O2 extraction increases in a compensatory fashion. This is reflected by a drop in SVO2. Interestingly, ΔPCO2 is found to widen in this clinical scenario of hypoperfusion, and not because of metabolic changes. This is rather due to the low flow state causing CO2 stagnation (i.e., reduction in CO2 washout) (10). Vallet et al. nicely demonstrated that it is the blood flow, rather than partial pressure of oxygen (PaO2) which affects the ΔPCO2 (by comparing ischemic hypoxia, where blood flow is reduced below a critical DO2 threshold vs. hypoxic hypoxia where PaO2 was reduced) (15). When DO2, drops below a critical level and anaerobic metabolism is triggered, anaerobic CO2 production is initiated, causing ΔPCO2 to widen further. Despite the contributions from aerobic and anaerobic metabolism, the impact of CO is much larger on ΔPCO2, given the curvilinear relationship between ΔPCO2 and CO.

Multiple studies observed the clinical value of ΔPCO2 in patients in septic shock. As previously described through the Fick equation, ΔPCO2, in the right clinical context of a steady state, reflects the CO and its adequacy to wash out CO2 relative to the patient’s metabolic state (16). This correlates with observational studies showing how ΔPCO2 reflects tissue perfusion parameters. Patients with high ΔPCO2 on admission have high lactate levels (17). Lactate clearance is much improved in patients whose ΔPCO2 normalized (it was reduced to <6 mmHg), reflecting improved organ perfusion (18). An elevated ΔPCO2 (above 6 mmHg) identifies patients who are inadequately resuscitated, despite central venous oxygen saturation (ScvO2) >70% (19). Reflecting the state of organ perfusion, an exaggerated ΔPCO2 also carries a prognostic weight and signals an increased mortality (13,17). Patients with a high ΔPCO2 at the time of presentation have worse outcomes, perhaps because of low organ perfusion. Similarly, patients whose gap is not reduced at 6 h have a higher risk of progressing to multiorgan failure.

The role of ΔPCO2 in titrating inotropes

The observation that the venous-to-arterial difference in PCO2 can be used clinically to reflect changes in CO has been evaluated in treating patients with septic and cardiogenic shock.

Mecher et al. studied 37 patients with severe sepsis, before and after fluid resuscitation (16). They found that an initial high ΔPCO2 reflected a low CO. Upon completion of fluid resuscitation, ΔPCO2 was reduced to <6 mmHg, as the CO was found to have increased. This opens the door for ΔPCO2 to be used as a resuscitation target.

Other studies looked at the impact of inotropic agents, specifically dobutamine. Inotropes play an integral role in resuscitating patients with shock. While most patients with cardiogenic shock are likely to benefit from inotropic support, patients with vasodilatory shock will behave differently. In septic shock every effort is made to improve DO2. This includes optimizing the stroke volume by increasing the intravascular volume, improving O2 content and delivery by transfusing blood, adjusting the mean arterial pressure (MAP) to enhance the perfusion pressure. Patients who continue to exhibit signs of hypoperfusion despite adequate MAP and hemoglobin concentration could suffer from reduced cardiac function and benefit from increasing cardiac contractility and organ perfusion through the use of inotropes (20).

These investigators looked at patients with no evidence for anaerobic metabolism or global tissue hypoxia. They explicitly included patients who had signs of hypoperfusion (based on oliguria, mottled skin and ScvO2 <70%), but whose MAP was >65 mmHg, Hb was >8 g/dL, who were no longer fluid responsive and whose lactate levels were normal. These were patients who exhibited signs of low perfusion, despite optimal intravascular volume, blood O2 carrying capacity and MAP, and would potentially benefit from inotropy at this clinical stage. Two such studies have been conducted: Mallat et al. studied 22 patients in septic shock while Teboul et al. studied 10 patients with congestive heart failure (21,22). These studies investigated the impact of an incremental increase of dobutamine by 5, from 0 to 15 µg/kg/min.

Both investigators found that increasing the rate of dobutamine infusion was accompanied by an increase in cardiac index (CI) and DO2, as anticipated. A dichotomous response was found for dobutamine doses between 0 and 10 and 10–15 µg/kg/min.

Between 0 and 10 µg/kg/min, dobutamine increased the CI and DO2, in a dose dependent fashion (CI increased from 3 to 4.6 L/min/m2). VCO2 increased, but to a much lesser extent compared to CI (Figure 1). This explains the commensurate decrease in ΔPCO2, from 8±2 to 4.2±1.6 mmHg (Figure 2), attributed to increased blood flow and improved CO2 wash out. As anticipated, SVO2, ScvO2, and O2 extraction improved as DO2 increased to organs who were still in need for O2. At these lower doses, dobutamine’s main impact is on the patient’s hemodynamics, improved organ perfusion and CO2 clearance. 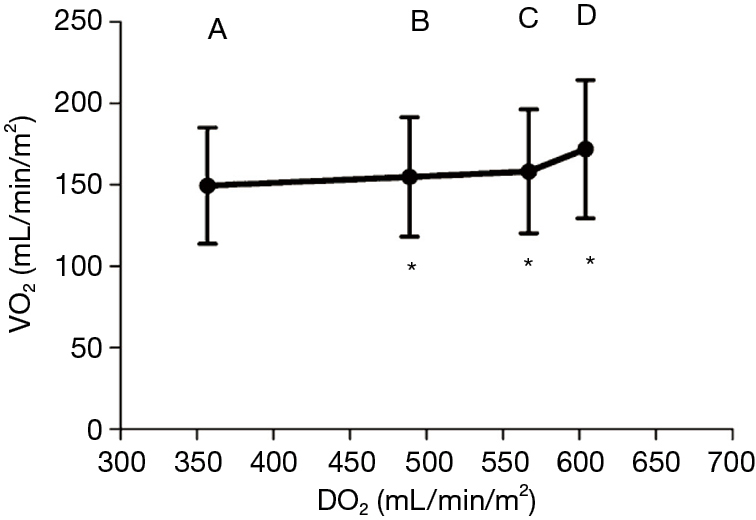 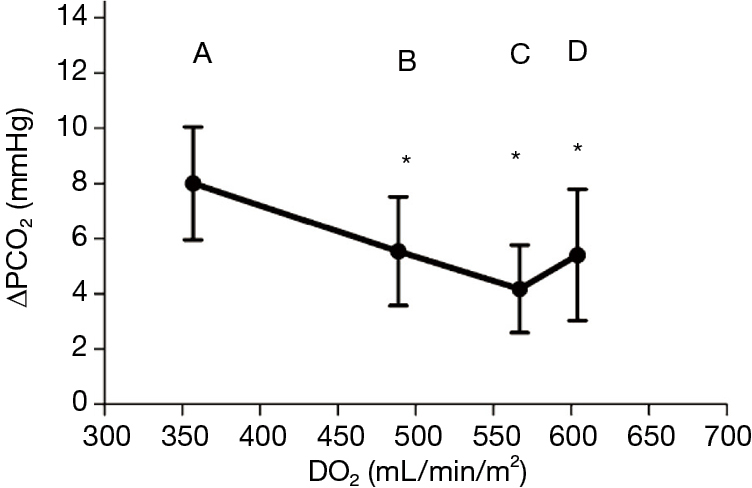 On the other hand, while increasing dobutamine from 10 to 15 µg/kg/min CI increased from 4.6 to 5.2 L/min/m2, and VCO2 was found to increase to similar levels. As such, ΔPCO2 remained constant (Figure 2). The increase in CO2 production is explained by the β adrenergic simulation effect of dobutamine. It has a direct cellular metabolic effect, increasing O2 consumption and CO2 production. This thermogenic effect is only seen at these higher doses of dobutamine (10–15 g/kg/min).

Tissue hypoperfusion during circulatory failure is associated with stagnation of CO2 in the tissues and increased tissues venous PCO2. The ΔPCO2 could be considered as a marker of adequacy of venous blood flow to remove the CO2 produced by the peripheral tissues, based on the Fick equation. This requires the patient to be in a steady state, and assumes the mixed venous values are close to the central venous values, which is the case in most patients.

In patients in cardiogenic or vasodilatory shock, without signs of global hypoxia or anaerobic metabolism, ΔPCO2 can be used to reflect the CO. This inverse correlation is a marker of the adequacy of the venous blood efflux to remove the total CO2 produced by the peripheral tissues. ΔPCO2 can be used to distinguish the hemodynamic from the metabolic effect of dobutamine when this inotropic agent is selected.

ΔPCO2 is easily obtained at the bedside and when included with other markers for tissue perfusion, can provide ample information to the clinician. This makes it an attractive marker in the ICU setting.