Video-assisted thoracoscopic surgery (VATS) has been used for lung resections or lobectomy from the beginning of 1990s (1). The frequency of using VATS compared to classical thoracotomy in pulmonary resections varies among medical centers, depending on the experience and choice of the surgeons (1-3). VATS lobectomy is accepted as a standard approach in selected cases for pulmonary resections, especially but not limited to early stage non-small cell lung cancer (1-5). With recent advances in both equipment and technique, VATS is being applied to more complex conditions.

The most common indications for conversion to open thoracotomy include history of prior surgery, administration of induction chemotherapy, tumor with chest wall involvement and endobronchial tumor presence that requires sleeve resection (1). Many centers with extensive experience in VATS have demonstrated the feasibility of thoracoscopic approach in these complex patients, including lung tumors with chest wall invasion and endobronchial localized tumor requiring bronchial sleeve resection.

We have been performing thoracoscopic lobectomy by using two port incisions since 1999, described previously (5-8). Briefly summarized, we employ two incisions: a camera incision in the 8th intercostal space at the mid-axillary line (1 cm) and an access incision anteriorly in the 5th intercostal space (4-5 cm in length). We perform routine hilar and mediastinal lymph node dissection as a standard part 44 of the operation (5,6).

Although the use of minimally invasive techniques to achieve lobectomy and chest wall resection has been described, there are still few reports about this technique (9-12). We employ a hybrid technique that includes the standard anterior 2-incision approach to complete the lobectomy, with sequential division of the hilar structures (6-9). The approach also includes VATS dissection around the tumor on the chest wall, with identification of the involved ribs, subperiosteal dissection of the ribs anteriorly and posteriorly, and division of the intercostal muscles. This dissection is improved with magnified, high-definition visualization provided by modern VATS technology. After completion of the VATS component, a counter incision is made directly over the tumor to complete the rib and chest wall resection and remove the specimen. Chest wall reconstruction may be applied if needed, which is completed using both the VATS and chest wall incisions, and the video scope for improved visualization (9) (Figure 1). 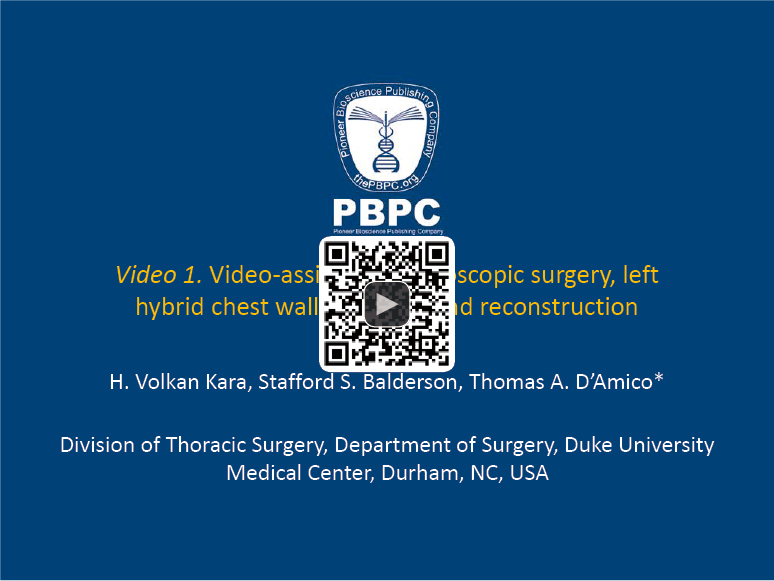 Patient selection is clearly critical to the success of the procedure, and many patients with lung cancer and chest wall involvement may not be candidates for the hybrid approach. Patients with large tumors (>7 cm), especially in the superior sulcus, are difficult to approach minimally invasively because the tumor obscures visualization of the thoracic outlet. Extensive hilar adenopathy or previous radiotherapy limiting hilar mobility may also prevent the thoracoscopic approach (9). Finally, tumors involving the transverse processes or vertebral bodies are not candidates for resection using only a small counter incision (9).

Endobronchial located tumors, which require sleeve resections, have previously been considered as absolute contraindicated cases for VATS lobectomy for many years (14,15). A VATS sleeve lobectomy requiring an endoscopic bronchial anastomosis was first reported in 2002 (16), but reports in the literature are limited and even surgeons performing VATS in their daily practice have been slow to adopt and develop this technique (14,15).

The bronchus is then transect distal to the upper lobe bronchus (allowing visualization of the tumor), and then proximal to the bronchus. Frozen section examination is routinely performed to confirm that margins are tumor free. Prior to beginning the anastomosis, it may be advisable to divide the inferior pulmonary ligament and open the inferior pericardium to allow upward mobility of the lower lobe and decrease the tension on the bronchial anastomosis.

Retraction of the two bronchial lumens is achieved with stay sutures (0-silk) to approximate the bronchi. The anastomosis is then completed using a continuous monofilament suture [3-0], starting posteriorly along the membranous portion and proceeding anteriorly, followed by the cartilaginous portion. The placement of sutures is greatly facilitated by the magnified, high definition video. After completion, the anastomosis is checked for an air leak under water (Figure 2). Fiberoptic bronchoscopy may be performed right after completing the anastomosis to examine the anastomosis and to clear the blood and secretions before extubation. 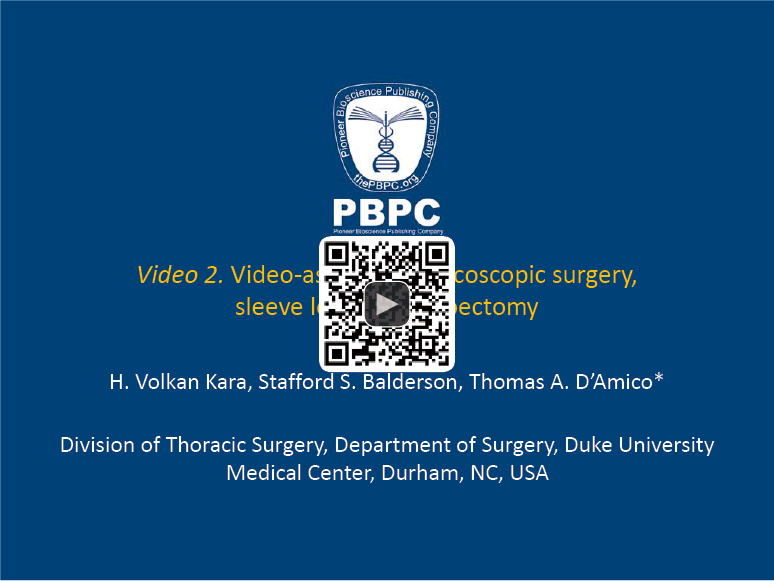 As experience increases with thoracoscopic sleeve lobectomy, the advantages and limitations will be more completely understood (14-16,18-20). The use of minimally invasive techniques when bronchial and vascular reconstruction is ever more limited, and the role of this procedure is not known (15,19). At this time, it appears that the oncologic efficacy for central tumors with hilar nodal involvement is similar for sleeve resection if negative margins can be achieved compared to pneumonectomy, although thoracoscopic pneumonectomy is also feasible if it is required (20).

It has been clinically observed and documented in publications that VATS lobectomy considered as a standard in thoracic surgery with acceptable safety, successful surgical outcomes and oncological efficacy in malignant and benign lung diseases requiring resection (1-5). Even though there have been no prospective randomized controlled studies comparing open to minimally invasive approaches, VATS has proven to provide less postoperative pain, faster return to full activity, preserved lung function, shorter chest tube duration and length of hospitalization, reduced inflammatory response and a lower rate atrial fibrillation and other postoperative complications in well-analyzed propensity-matched studies (2-4,21).

With the increasing experience, the indications for VATS lobectomy have been expanded, to now include patients requiring lobectomy and chest wall resection or sleeve resection and reconstruction, previously defined as absolute contraindication. Both approaches should be applied after an extensive experience with thoracoscopic lobectomy. The Consensus Group agreed that a surgeon to gain adequate technical proficiency should perform at least 50 cases and at least 20 cases should be performed annually to maintain operative skills (22). Providing this training starting from the residency and supporting with the dedicated courses and preceptorships for surgeons in practice would be ideal (3).

Dr. D’Amico is serving as a consultant for Scanlan.