Acute pulmonary embolism (PE) is a cardiovascular emergency associated with significant morbidity and a 5-35% mortality for untreated PE (1,2). The classic risk factors for PE are those identified as Virchow’s triad (hypercoagulable state, stasis and injury) (3,4), which include deep vein thrombosis (DVT), major surgery, major trauma, high age, myocardial infarction and chronic heart failure (5). A 48-year-old man presented to Emergency Department with a PE and a history of taking inferior liquor for more than 30 years, 500-750 g per day. The patient was confirmed with alcoholic cardiomyopathy (ACM) by further examinations. We had excluded common risk factors for PE, and here we discuss the relationship between ACM and PE. The following is a detailed report of the case accompanied by a review of previous studies.

A 48-year-old male patient presented with chest discomfort for more than one month, accompanied by hemoptysis for ten days. He felt persistent chest discomfort under no obvious predisposing causes at the beginning of March in 2013, mild with no influence on daily life at first but gradually aggravated with abdominal distention, poor appetite and without cough, expectoration and fever. He was diagnosed with ‘coronary heart disease, DM type II, pneumonia and pleural effusion’ by a local hospital on 15th of March, treated for more than 10 days in the hospital with unclear exact details and the symptom alleviated after the treatment. The hemoptysis began with no obvious causes from the middle of April with plentiful sputum, about 50 mL per day, dark red bloody at first and then turning bright and with mucus, accompanied with chest discomfort continually, shortness of breath and dull chest pain mainly located in the bilateral hypochondriac regions and together with poor appetite, upper abdominal distending pain and without fever. The patient was hospitalized in the local Department of Gastroenterology on 25th of April. The results of gastroscopic examination showed chronic superficial gastritis with antral mucosal atrophy, and the examination of cardiac ultrasonography showed left cardiac insufficiency, enlargement of the whole heart, moderate mitral regurgitation, mild to moderate aortic regurgitation, mild tricuspid and pulmonary regurgitation and a severe reduction in ejection fraction (24%). Chest computer tomography (CT) showed the inflammation on bilateral lobes. In the next four days, the patient was given corresponding treatments but with no significant therapeutic efficacy and transferred to our hospital on 30th of April in 2013. In the emergency room, the results of CT angiography (CTA) revealed thrombosis in the branches of bilateral pulmonary arteries, bilateral pneumonia and right pleural thickening (Figure 1). While deep venous ultrasound of lower limbs revealed bilateral femoral venous valve insufficiency and bilateral calf muscular venous thrombosis. Then, the patient was hospitalized in our department as ‘PE and pulmonary infection’.

Past illness: the patient has a history of taking inferior liquor for more than 30 years, 500-750 g per day and smoking for more than 20 years, 10+ cigarettes per day. 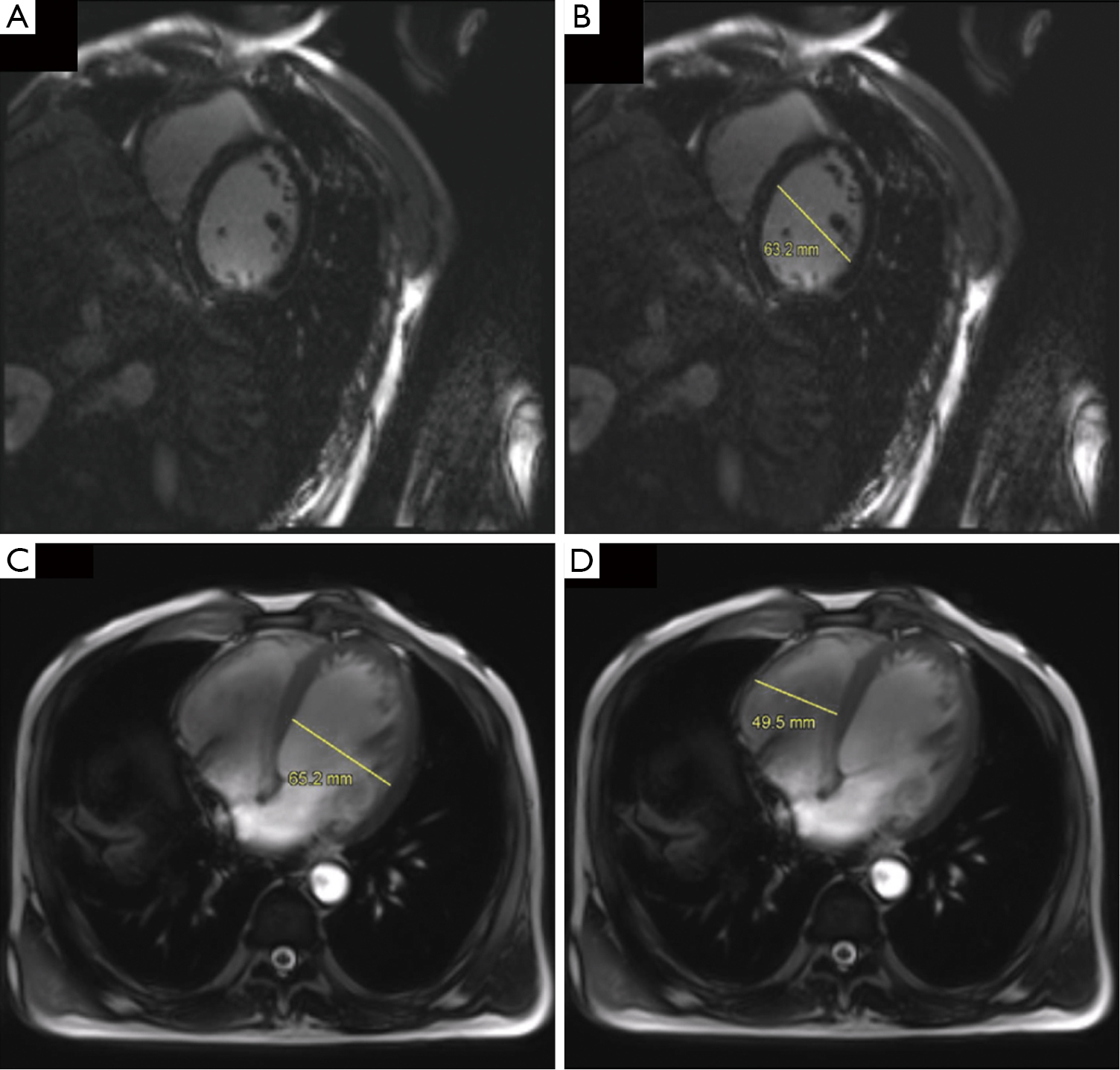 Figure 2 Heart MR3T showed enlargement of the whole heart. (A,B) On the short axis, the left ventricle’s diameter was 63.2 mm at the end of diastole; (C,D) the diameter of left and right ventricle was 65.2 and 49.5 mm, respectively (through the axial view). MR3T, magnetic resonance imaging at 3 T (GE Signa Excite HD scanner) enhancement scanning.

Figure 3 2D-heart ultrasound showed a diffuse hypokinesia of the left ventricle with a mild mitral regurgitation and a moderate reduction fraction (40.2%).

Treatment: the patient received cefoperazone and tazobactam as an anti-infection therapy, tanreqing and ambroxol to reduce phlegm, enoxaparin as an anti-coagulation therapy, alprostadil to drop the pressure of pulmonary artery down, hydrochlorothiazide and spirolactone to improve cardiac function and then treated with warfarin as an anti-coagulation therapy. During the whole process, the patient gave up drinking totally. He wanted to take some alcohol sometime, especially when his condition improved, but the abstinence symptoms did not experience. Gradually, chest discomfort, chest pain and hemoptysis were alleviated and pulmonary rales reduced obviously.

On May 11th, chest CTA showed most thrombosis were absorbed, a little shadow of embolism in the right lower branch of pulmonary artery, multiple patching shadow in bilateral lungs which were considered as the infection and right pleural thickening (Figure 1B).

On May 14th, the patient had a favorable turn and discharged with doctor’s advice of giving up smoking and drinking, continuing the oral treatment of warfarin, monitoring blood pressure, INR, 2D-heart ultrasound and chest CTA and follow-up by telephone. On May 21st, the feedback of 2D-heart ultrasound showed left ventricular diastolic insufficiency and EF was 62%.

PE is a general term of a series of diseases and clinical syndromes which are cause by various emboli (endogenous and exogenous) blocking the pulmonary arterial system, whose clinical symptoms are various and lack of specificity (6). Limited by the condition of examination and the experience of clinical doctors, many mistaken and missed diagnoses exist. Main reason is DVT and dangerous factors contain trauma, long-term bed rest, varicose veins, venous cannula, pelvic and hip surgery, obesity, DM and contraceptive. In addition, various heart diseases are also the main reasons, especially cardiomyopathy, heart valve diseases and infectious endocarditis (5). The hypercoagulable state caused by malignant tumors can also lead to PE. In this case, we highly suspected that primary heart diseases lead to the embolism because of no dangerous factors related to DVT and negative results of rheumatic, immunological or tumor markers.

ACM is a kind of disease that has typical hemodynamic change, symptoms, signs and imaging findings of dilated cardiomyopathy (DCM) and its symptoms can be released or cured after 4-8 weeks of giving up drinking (7). The incidence of this disease is higher in males than in females, also higher in Europe, the US and Russia than in other regions of the world (7,8). In China, there are sporadic case reports. It mostly occurs on male of 30 to 55 years old with over-drinking history for more than ten years. It has various clinical manifestations, including the main features of cardiac enlargement, cardiac insufficiency and arrhythmia (9). The diagnosis criterion contain long history of excessive drinking, the manifestation of cardiac enlargement, CHF and getting better apparently after giving up drinking for 4-8 weeks. In this case, the patient had a long history of drinking massive liquor and stopped drinking from the onset of this disease. His main initial symptom was whole heart enlargement, which similar with manifestations of the DCM. As a matter of fact, heart MRI-3T and 2D-heart ultrasound help us exclude other non-ischemic cardiomyopathy, such as hypertrophic cardiomyopathy and restrictive cardiomyopathy. His younger brother, 46-year-old, has a similar habit of drinking as well. During this hospitalization, we also performed the examination of 2D-heart ultrasound for him, which showed the existence of cardiac diastolic insufficiency and proved the basis of ACM from another point of view.

We hold the opinion that analyzing the case and making a diagnosis can be based on several points below.