Extracorporeal membrane oxygenation (ECMO) is a form of cardiopulmonary life-support, and may be very useful in selected cases as traumatic tracheo-bronchial injuries, allowing an efficient gas exchange where ventilation is not feasible. Even if, nowadays, little used, ECMO is an additional arrow in the quiver of the doctors, especially in challenging cases.

Tracheo-bronchial injuries are rare but potentially life-threatening conditions; especially complete traumatic blunt tracheal transections require an urgent treatment to restore the physiological ventilation (1,2). Despite the amount of blunt injuries is increased, during the last decades, due to increased number of traffic accidents (3), tracheal injuries remain uncommon. An early diagnosis and treatment are mandatory also to prevent the severe long-term morbidity related to airway patency and phonation (4-6). In most cases the suspicion may be clinical and radiological, especially in patients with respiratory distress, trauma anamnesis and subcutaneous emphysema with radiological feature of tracheo-bronchial tree disruption, but bronchoscopy is mandatory for an accurate diagnosis and evaluation of the damage extent (1). Once obtained the diagnosis, the next steps are to guarantee an adequate gas exchange, through an early intubation of the distal tracheal stump, bridging the lesion, therefore, to evaluate the possibility of tracheal repair without any further delay.

The article by Carretta and colleagues (2) describes an interesting case of a young man, involved in a car accident, who reported a complete separation of the distal tracheal stump. Authors present an innovative management to guarantee the gas exchange before the operation, after consequence of an unsuccessfully attempt of trans-lesional intubation under bronchoscope assistance. They came to the bold decision of starting a veno-venous (VV) extracorporeal membrane oxygenation (ECMO) without an initial anticoagulation, right before performing a successfully end-to-end tracheal anastomosis through a cervicotomy and partial upper sternotomy. A low dose of anticoagulation with bivalirudin was started only afterwards, the patient was extubated 24 hours after surgery, while the weaning from ECMO was accomplished after four days uneventfully.

The above-mentioned case is paradigmatic of the high potential of the ECMO technology: it is a safe and effective tool, useful to both the surgeon and the anaesthesiologist to manage patients with severe airway lesions.

ECMO is a form of cardiopulmonary life-support (7). Since the first applications in the 70’s, and for decades, ECMO has been a useful supportive therapy for severe cardiopulmonary disease (8). Its worldwide rapid spread was consequent to the CESAR trial [2009] which reported a significant improvement in patients with severe respiratory failure treated with extracorporeal support in an expert high-case-volume center compared with no specialized hospital care (9).

Indications for ECMO can be divided into three categories according to the supported organ: cardiac support, respiratory support or a combination of both (Table 1) as reported by Makdisi (11). Recently new advances in technology, as well as new cannulation technique and extracorporeal circuits, leaded to an increasing number of indications for which ECMO may provide a benefit (12). 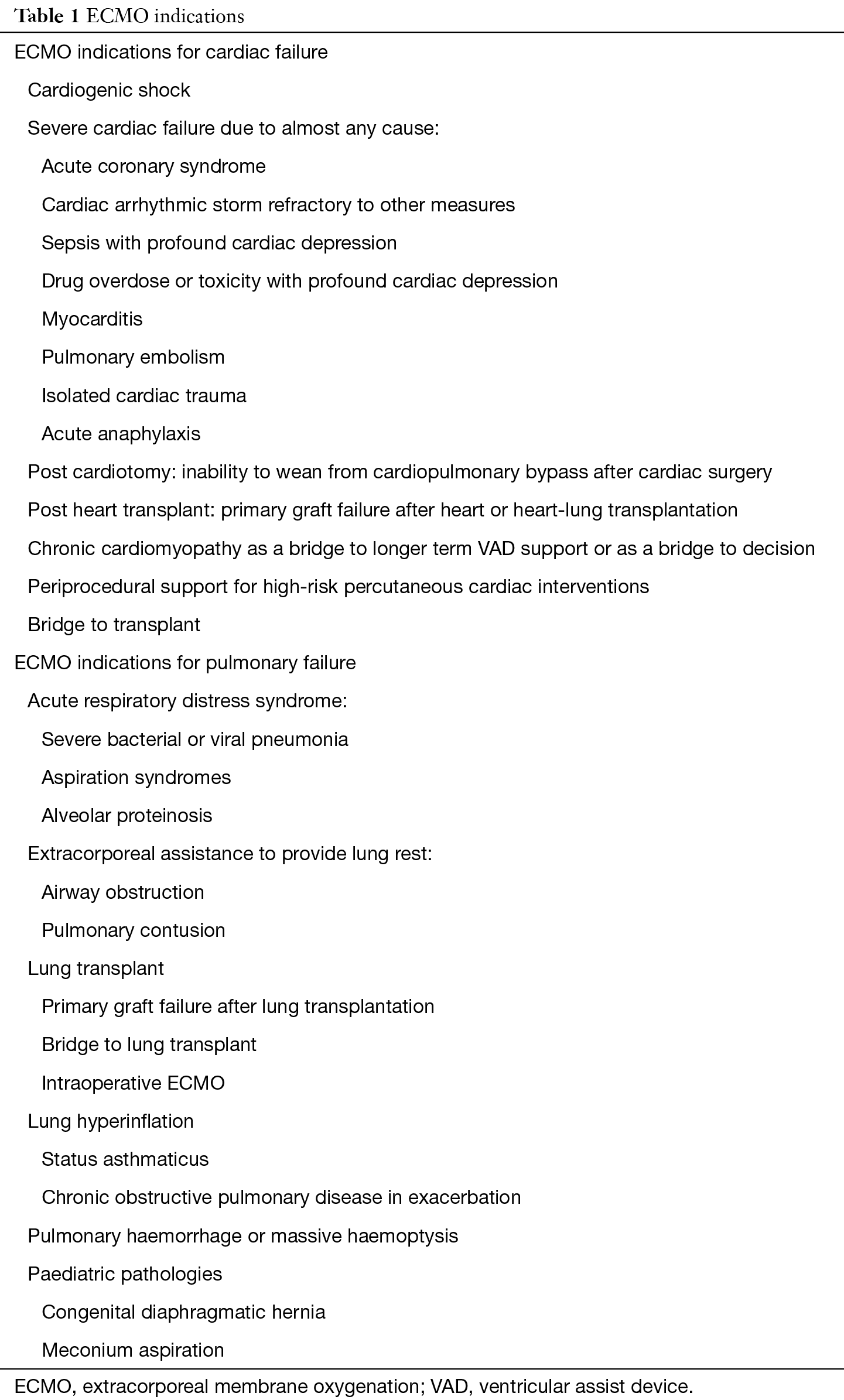 ECMO for severe respiratory failure was initially used in neonates and children (13) and only afterwards in non-traumatic adult patients (14) as supportive therapy in order to obtain a viable oxygenation and to gain time for lung healing (15). Cardiopulmonary support has historically been limited to non-trauma cases especially because of disease physiology, fat embolism and the risk of bleeding associated with systemic heparinization required during extracorporeal life support (ECLS).

The first report of a successful management with prolonged ECLS system for ARDS in trauma patient dated to 1972 thank to the work of Hill et al., even if the first retrospective study on the use of ECMO in trauma patients goes back to 1994 through the work conducted by Shapiro and colleagues. They described the use of ECLS in 24 patients with multiple trauma, who developed respiratory failure refractory to conventional ventilatory management, obtaining a 63% of survival rate (16,17). However only in 2017, Bedeir and colleagues published a systematic review on the use of ECLS in trauma patients concluding that ECMO may provide survival benefits that significantly overweigh the feared risk of bleeding associated to the procedure (18).

Tracheo-bronchial surgery is extremely complex especially in cases of urgency and requires a highly specialized multidisciplinary team and a referral center. The operation needs a good exposure of the surgical field and a quick and effective control of the ventilation and oxygenation during resection and reconstruction. The most used technique to maintain intraoperative gas-exchange, when possible, is a cross-table ventilation of the distal airways over sterile tubes or by using high-frequency jet ventilation or high-flow oxygen insufflation over small diameter catheters; even if the latter approach often cannot provide adequate carbon dioxide delivery (19).

In all cases where an effective ventilation cannot be guaranteed or in very challenging cases, ECMO support may be considered a very useful tool allowing an efficient gas exchange and preventing periods of intermittent ventilation that may be required during surgery. Moreover, it allows to perform complex operative procedures under completely stable conditions without impairment of the surgical field with endotracheal cuffed tubes or high-frequency jet ventilation catheters.

First reported experiences on the use of ECMO support for thoracic procedures were limited mainly to the neonatal and paediatric field both in an emergency and in an elective setting (20). Subsequently the use of intraoperative ECMO support was extended to adult patients who underwent elective complex tracheo-bronchial reconstruction. In 1996, Horita et al. reported two carinal reconstructions performed by using peripheral VV ECMO support, while few years later Kondo et al. performed two left sleeve pneumonectomies with central VA ECMO support (21,22). Lang and colleague in 2014 published an interesting article on the use of VA ECMO support in 10 patients operated of complex tracheo-bronchial resections for tumours under elective conditions. In all cases, surgery had no complication related to ventilation, with a low morbidity and no perioperative mortality and the patients were discharged from the hospital after a median of 11.5 days (23).

The first descriptions of cardiopulmonary support for a traumatic tracheo-bronchial injury in an adult were described by Walker et al., in 2012. This case report described a successful surgical repair of the transected right main bronchus in a patient stabilized thanks to the ECMO in a dual lumen VV cannula configuration (24). In the same year, Enomoto et al. described the use of a peri-operative VV ECMO in a patient who reported a traumatic tracheal transection 10 mm above the tracheal bifurcation (25).

In view of the foregoing, the Carretta’s paper contributes to light up the potential of the ECMO support in challenging cases, as the acute complete traumatic blunt tracheal transaction. Moreover, it provides useful details that have led the medical team to the decision of using ECMO with a VV configuration (2).

Authors were able to highlight and discuss several aspects of this technique, evaluating all its advantages over the alternatives. Firstly, the impossibility of intubating the distal tracheal segment prevents from obtaining a pre-operative secured airway while a cross-field intubation prevents a clear surgical field comparing with a femoro-femoral cannulation. Secondly, ECMO support allows a delayed anticoagulation even in the post-operative time while the cardiopulmonary by-bass (CPB) requires a full systemic heparinization with a high risk of bleeding. Lastly, the use of CPB does not allow an early extubation after surgery, which is mandatory in tracheal reconstructive surgery to prevent post-operative high-pressure ventilation and to favour healing process of the airway.

In conclusion, traumatic tracheo-bronchial injuries are potentially life-threatening conditions which require early measures to guarantee an adequate ventilation and avoid severe consequences. ECMO support is an additional arrow in the quiver of the surgeon and anaesthesiologist, a valid alternative to CPB technique when conventional ventilation is impossible in case of airway’s surgery; a bold but effective tool that may result in a saved life.