Contrast induced nephropathy (CIN) is an iatrogenic renal injury that occurs following the administration of intra-vascular radio-opaque contrast media. It affects 1–2% of all patients undergoing coronary angiography procedures and accounts for a third of all in-hospital acquired kidney injuries (1). As we are now performing coronary procedures more frequently in older patients with a multitude of comorbidities, CIN is becoming increasingly relevant. Furthermore, it is not an entirely benign event. Although, in the majority of patients, the renal impairment is transient, the development of CIN has also been associated with prolonged hospitalisation, increased cardiovascular events and increased mortality at short and medium term follow up (2-4). Therefore, the ability to prospectively identify those patients at risk and take appropriate precautionary measures including a reduction in contrast volume and administration of prophylactic treatment would be advantageous.

Ni et al. are not the first to develop risk models for CIN. Perhaps the most widely known score is the Mehran score (5). This score consists of a number of recognised risk factors and has been validated in a large cohort study. However, a major drawback of the Mehran score is that it cannot be fully calculated pre-procedurally as it incorporates contrast volume in its calculation. It is clinically desirable to be able to predict risk prior to contrast administration so that prophylaxis can be administered. Mehran score is nevertheless one of the few scores to date to be validated on an external cohort. However, the median C statistic from external validation is reduced to 0.57; indicating only moderate predictive ability (6). The lack of external validation is a major limitation of this score proposed by Ni et al. It is unclear whether this score would perform as well in another population which may have a different risk profile. The C statistic is a function of sensitivity and specificity, both of which are influenced by case mix, disease severity and risk factors which are likely to vary across different populations as has been seen with Mehran score.

A number of other scores have been published in recent years with variable applicability (Table 1). Most of these scores have a similar level of predictive accuracy, however the majority are yet to be externally validated and many cannot be calculated pre-procedurally. The score proposed by Tziakas et al. was externally validated as part of a multi-centre study and the C statistic remained at 0.741 (16). However, like the Mehran model, this score utilises contrast volume in its calculation limiting its clinical applicability. Moreover, there is a lack of data from impact analyses on the effect of the prospective use of a risk assessment model on outcomes, notably hard renal and cardiac end points, which would require a randomised controlled trial. Although a relationship between CIN and major adverse cardiovascular events has been demonstrated, it is not clear if the relationship is causal or if CIN represents a marker of risk as opposed to independent risk factor. This is further confounded by the fact that the evidence for prophylaxis in CIN is somewhat controversial. To date there is no definitely effective strategy for prophylaxis or treatment of CIN. The provision of IV hydration and N-acetylcysteine (NAC) have been extensively studied but there is still no consensus on their efficacy despite multiple trials and meta-analyses (17). The recent PRESERVE trial demonstrated no benefit of sodium bicarbonate over saline or of NAC over placebo (18). Patients were not stratified using a risk model in this trial; potentially a missed opportunity. 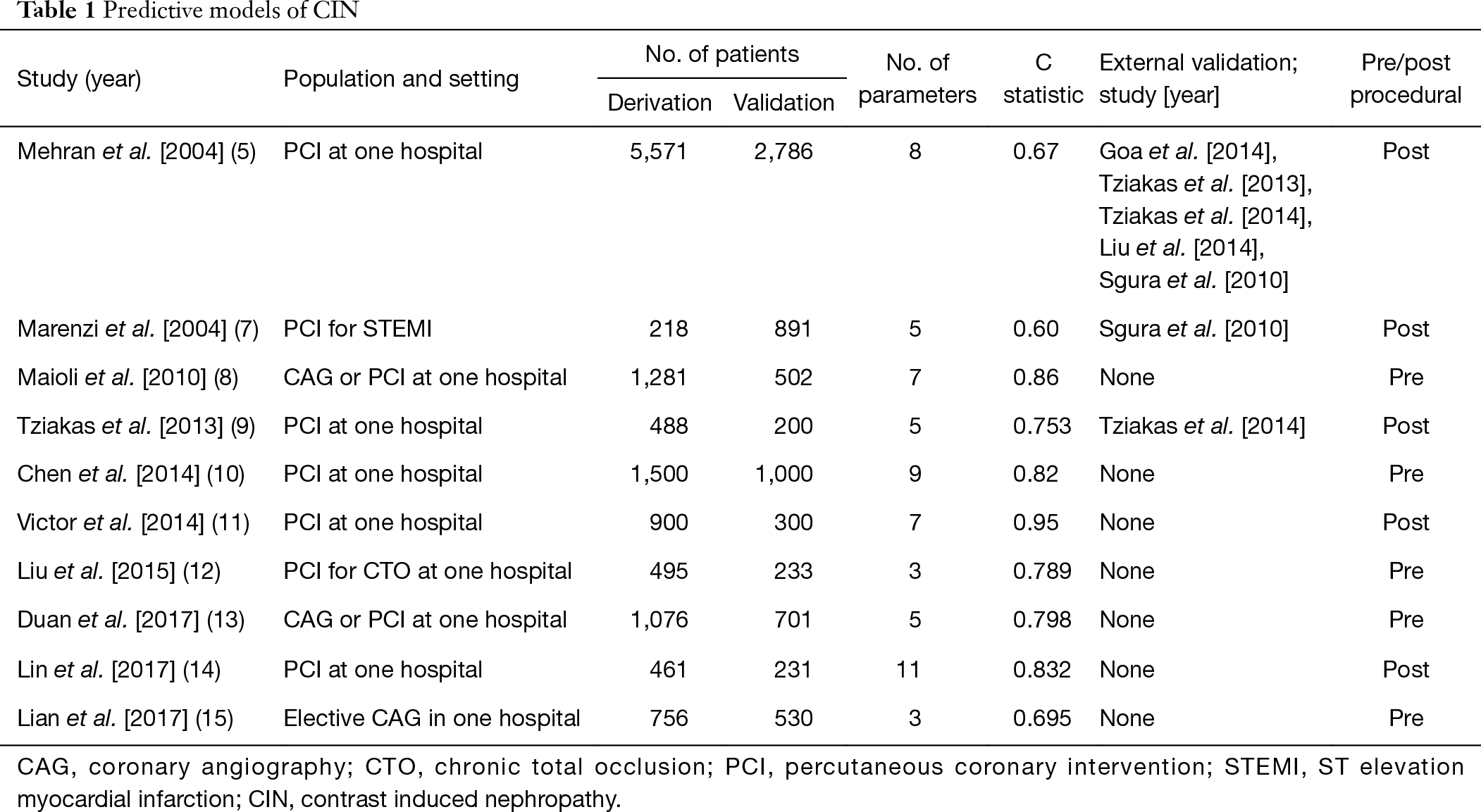 Another limitation of current risk scores, including the one developed by Ni et al, is the difficulty in applying them to the ST elevation myocardial infarction (STEMI) population. In this cohort, there are inherent difficulties in rapidly assessing CIN risk and instigating prophylactic measures. Moreover, these procedures often use increased contrast volume and the patients are more likely to be haemodynamically compromised increasing their risk of renal impairment. One of the major difficulties in this cohort is that laboratory results are often not available pre-procedurally due to the urgency of the procedure. All of the validated risk scores, including the one presented in this paper, rely on biochemical markers, making their application in STEMI limited.

In conclusion, the authors have developed a simple pre-procedural risk model that in a single centre appears to have high predictive ability. However, external validation along with outcome data are required to demonstrate the true generalisability and applicability. This is an important next step that will help to set it apart from the large number of other scores that have been developed in recent years. Moreover, its use in STEMI is questionable and there remains a need to develop a risk assessment tool that can be easily applied to this high-risk cohort.