The collagen hemostatic matrix (CHM) is a novel thrombin-containing collagen-based hemostatic matrix, is a flowable, paste-like matrix that exhibits both passive and active mechanisms of actions, which is similar to FloSeal® (Baxter Healthcare, the USA) or SurgiFlo® (Ethicon Inc., the USA). Once the collagen granules of CHM come in contact with blood, they swell up, thereby obstructing blood flow, and act as tamponade that compresses the surrounding tissues. Meanwhile, thrombin promotes blood coagulation. Furthermore, flowable hemostatic agents may be more advantageous than nonflowable hemostats as they have the capability to cover irregular wound surfaces, fill deep lesions, and easily remove excess material with irrigation. Flowable hemostatic agents are more effective than conventional methods in multiple surgical procedures (5).

In this study, we evaluated the hemostatic efficacy of the CHM compared to FloSeal® via incision of heart and cardiac vessels in a porcine model.

The study was reviewed and approved by the Institutional Animal Care and Use Committee of Samsung Medical Center (Seoul, Republic of Korea), and the experiments were performed in accordance with the Institute of Laboratory Animal Resources guidelines.

In this study, we compared a novel CHM (CollaStat®, Dalim Tissen Co. Ltd., Korea) with FloSeal®. CHM is a flowable, paste-like substance similar to FloSeal® or SurgiFlo®, and it is made using two syringes (syringe A and B). Syringe A contains atelocollagen, thrombin, and mannitol. Syringe B contains calcium chloride solution. This novel CHM can be prepared using a simple procedure that involves syringe locking and mixing, which does not require a time-consuming thrombin reconstitution process (Figure 1).

Figure 1 The CHM is made using two syringes, one containing powder and another containing CaCl2 solution (A). It can be prepared using a simple procedure that involves syringe locking (B) and mixing (C). CHM, collagen hemostatic matrix.

Throughout the entire surgical procedure, the animal was maintained under general anesthesia. Blood pressure and heart rate were monitored during the experiment and maintained within normal range. No anticoagulants or antiplatelets were used during the operation.

After performing a median sternotomy, two stab incisions were made in seven locations with a no. 11 surgical blade (Nopa Instruments, Germany): the right atrium (RA), right ventricle (RV), and cardiac vessel, such as the innominate vein (IV), superior vena cava (SVC), pulmonary artery (PA), coronary artery (CA), and aorta. Bleeding was treated by applying a hemostatic agent (CHM or FloSeal®) directly on the visible bleeding wounds; then, a wet cotton gauze was applied in a specified time period (Table 1) over the hemostatic agent using gentle compression. After compression, the excess hemostatic agent was irrigated using saline. Continuous wound bleeding was considered as failed hemostasis. The degree of bleeding was assessed using a three-point bleeding score: −, no hemostasis; ±, some hemostasis (blood leaking); and +, good hemostasis (Figure 2). Based on the results of the first animal attempt, we slightly modified the locations of the incision in the second pig. The IV was removed because the vascular characteristics were similar with those of the SVC. The aorta was added rather than the PA because we attempted to investigate the effect of the agents in various sites. 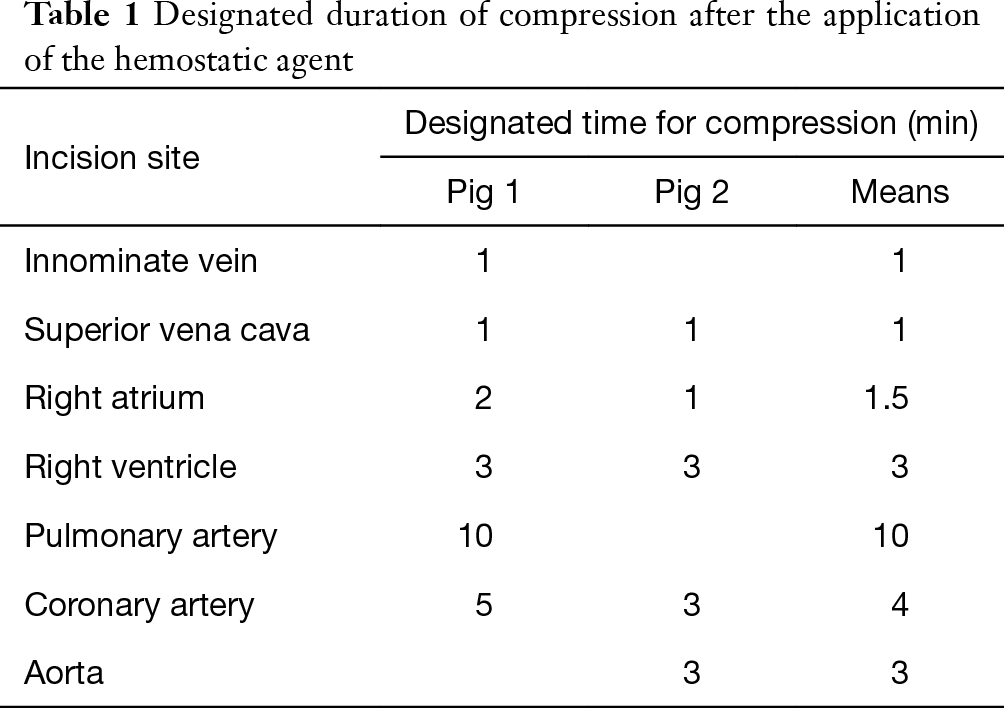 Figure 2 The three-point bleeding score was used to assess the degree of bleeding from each wound (−, no hemostasis; ±, some hemostasis; and +, good hemostasis).

Transfusion and surgical revision were not conducted. Both pigs survived until the seventh operative day without significant complications. Seven days after surgery, the animals were sacrificed by injecting potassium chloride (Daihan Pharm, Korea). After performing a resternotomy, the specimens obtained from the SVC and RA were collected because the lesions could be identified easily and fixed in 10% formaldehyde (Daejung Chemicals and Metals, Korea). The specimen could not be obtained from the other site because the exact locations could not be identified even though they were marked. The fixed specimens were dehydrated in a series of ethanol dilutions and embedded in paraffin. Sections were obtained using a microtome and were stained with hematoxylin and eosin and Masson’s trichrome. 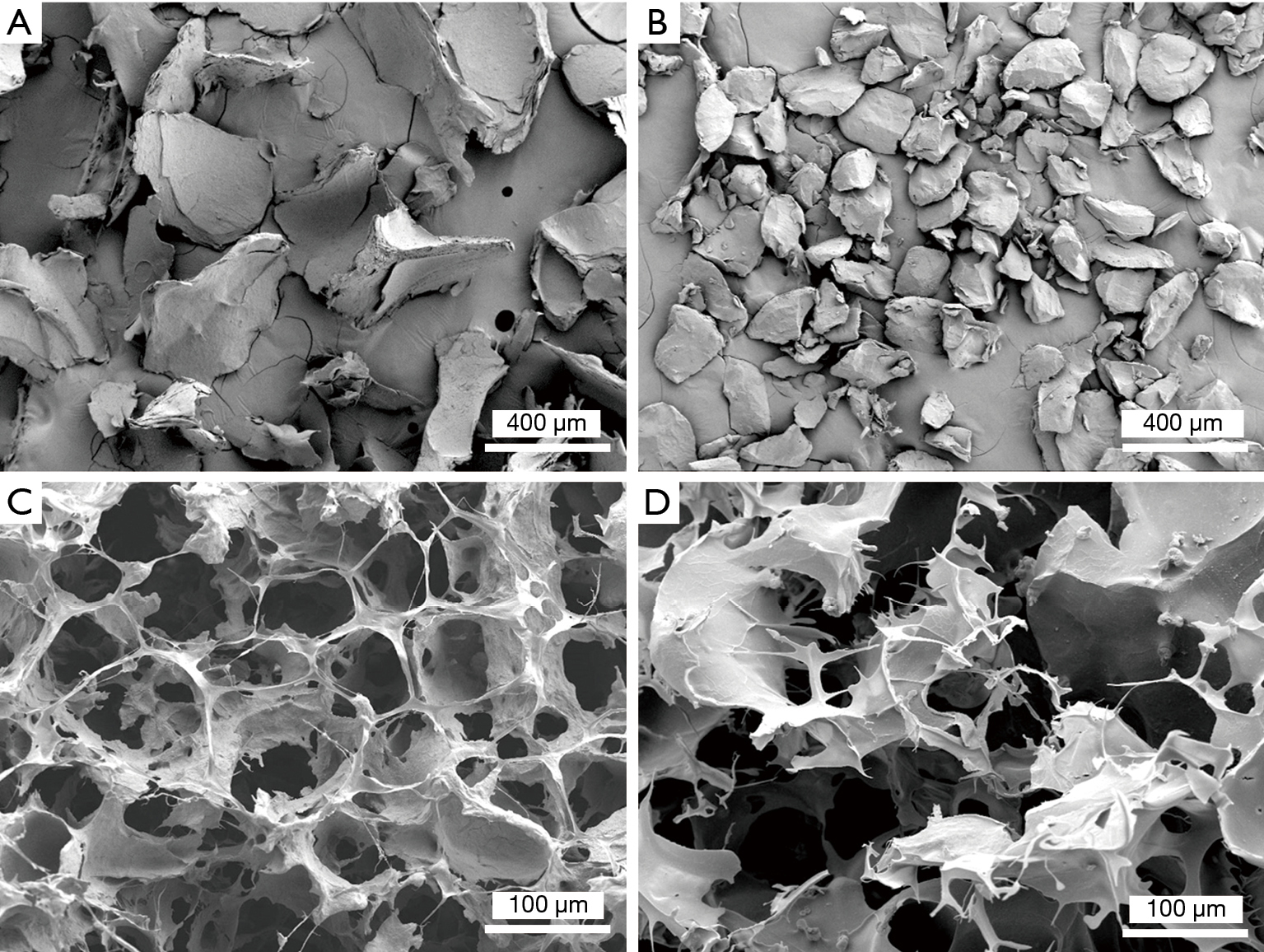 The time to hemostasis and the degree of bleeding were compared after the application of the CHM or FloSeal®. We specified hemostatic compression time according to each vessel size (Table 1). Bleeding from the vessels with relatively low pressure and small diameters was easily controlled within 1–2 minutes. For the IV, SVC and RA, 1 minute of hemostatic compression was enough to achieve hemostasis after the application of CHM or FloSeal®. On the contrary, the vessels with high pressure and large diameters required 3–10 minutes of hemostasis. Because bleeding at the RA and CA were well controlled in the first pig, we attempted to decrease the compression time to evaluate the effectiveness of the agents in the second pig. Bleeding from all vessels was controlled with the use of the CHM (Table 2, Figure 4). However, the use of FloSeal® failed to achieve hemostasis in the PA and CA in the second pig. 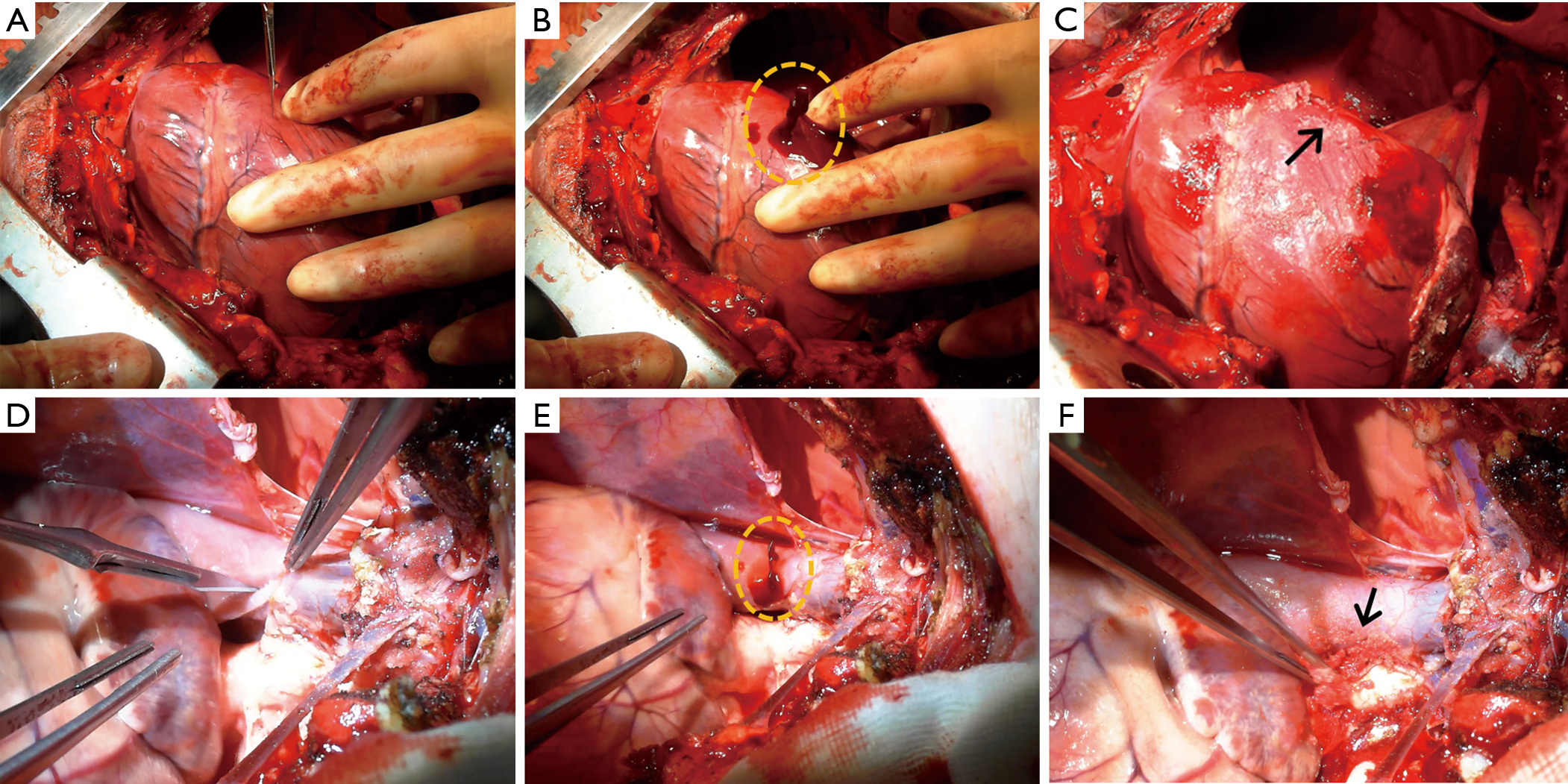 Figure 4 Hemostasis was achieved with the CHM for hemorrhage induced in the RV (A,B,C) and the SVC (D,E,F). Incisions that are 2–3 mm in length were made using a no. 11 surgical blade (A, D). After making the incision, blood spurted from the wound (B and E, yellow circles). Bleeding was controlled after the application of the CHM for 1–3 min (C and F, black arrows). CHM, collagen hemostatic matrix; RV, right ventricle; SVC, superior vena cava.

Histological analysis revealed a granulomatous inflammatory response consisting of giant multinucleated cells and macrophage and lymphocyte infiltration, and fibroblasts were found to surround the test substance in the SVC. However, in the SVC, the degree of inflammation was similar according to the type of hemostatic agent used, and inflammation was induced by a residual level of test material in the tissue. No difference was observed in the degree of inflammation in the RV according to the type of hemostat used (Table 3, Figure 5).

Over the past 15 years, different agents that can be used to achieve hemostasis in surgical procedures have been developed. These agents can be divided into three broad categories: hemostatics, sealants, and adhesives. They widely vary depending on their mechanism of action, composition, ease of application, adhesion to wet or dry tissue, immunogenicity, and cost.

Heart or aortic surgeries have higher risks of bleeding than other operations because they are performed on organs containing highly pressurized blood, and heparin is used in most surgeries. A rapid hemostasis in surgery may have potential benefits, which include a better visualization of the operative field, shorter surgical times, less need for transfusions, better management of an anticoagulated patient, reduction of the healing time of wounds and general improvement of the recovery times of patients. A meticulous surgical procedure with hemostasis is essential. However, the need for save and effective hemostatic agents can have a wide range of benefits is clearly a significant problem during surgery.

This study aimed to identify and compare the efficacy of a novel flowable CHM to that of FloSeal® in a porcine heart and cardiac vascular injury model.

Hemorrhage was induced at seven locations (14 sites in each pig) and was treated with the CHM and FloSeal®. All bleeding was successfully controlled with CHM. In the FloSeal®-treated group, hemostasis in the PA and CA was not achieved. The CHM-treated group showed acceptable hemostatic effects similar to those of the FloSeal® treated group.

Hemostatic agents may cause significant histopathologic alterations, such as inflammation, adhesion, and fibrosis. These changes may induce vascular stenosis or deformities (8). FloSeal® is composed of gelatin granules and thrombin. No unfavorable histologic alterations, including chronic inflammation, adhesion, or increase in vascularity, were observed after the use of FloSeal® in rat laminectomy models (2). In our study, to evaluate the safety of the hemostatic agent, a histological analysis was performed. Results showed that the tissue responses were similar between the CHM- and FloSeal®-treated groups. Excess residue should be appropriately removed, as the inflammatory reaction caused by residual material in the tissue was confirmed.

FloSeal® and SurgiFlo® have several advantages, which include excellent hemostatic performances and flowable properties, which make them easy to apply, even on irregular surfaces. However, they require thrombin reconstitution process prior to mixing the thrombin into the gelatin matrix. FloSeal® requires a preparation time of 2–5 minutes (9). Moreover, it can be time-consuming in some patients, such those with persistent bleeding, which require immediate interventions. The CHM is made using two syringes (syringes A and B), does not require thrombin reconstitution process, and can be mixed by a simple procedure of syringe locking and mixing. This simplified preparation process can facilitate a more rapid application of the CHM to the surgical field.

Our study has several limitations. First, this study has the experimental design and challenges in the extrapolation of our data to clinical setting. There are likely to be species-related differences in the inflammatory reaction to surgery as well as to the hemostatic agents. Second, the actual amount of blood loss in each pig and variability of pressure during the application of the hemostatic agents could not be evaluated. Third, the application time in each site was different. We initially applied shorter time (1–2 min) in low-pressure chambers (the IV, SVC, and RA) and longer time (3–10 min) in high-pressure chambers (the RV, PA, CA, and aorta). Therefore, the effects of pressure difference in each site could not be accurately evaluated. Fourth, only two pigs were included in the study. However, several incision sites were established in each pig to improve the comparison between the two hemostatic agents. Finally, anticoagulants, including heparin or antiplatelet agents, were not used in our study. Moreover, they are commonly used in cardiac surgery and are the major contributing factor of bleeding. Therefore, our results should be applied cautiously in actual clinical setting. Randomized study with a larger sample size, which includes patients undergoing cardiac surgery using heparin or those undergoing coronary bypass surgery, commonly taking antiplatelet drugs (aspirin or clopidogrel), must be conducted to elucidate the efficacy and histopathologic impacts of CHM use in cardiac surgery.

In conclusion, the hemostatic effect and safety of CHM may be similar to that of FloSeal®. Further studies must be carried out to validate our results.

Funding: This study was supported by the Enterprise Support Program of Samsung Medical Center organized by the Ministry of Health and Welfare (grant number: H14C3229).

Ethical Statement: The study was reviewed and approved by the Institutional Animal Care and Use Committee of Samsung Medical Center (Seoul, Republic of Korea). The authors are accountable for all aspects of the work in ensuring that questions related to the accuracy or integrity of any part of the work are appropriately investigated and resolved.