Acute myocardial infarction (AMI) is a common cardiovascular disease characterized by rapid and sudden morbidity and high mortality (1). The occlusion positions of the coronary artery are closely correlated with the prognosis, among which the left anterior descending (LAD) is the most commonly blocked (2). LAD block can result in infarctions of the left anterior ventricular wall, cardiac apex and lateral wall. The prognosis varies because of different infarction areas in distinct LAD occlusion locations (3). AMI is often accompanied by malignant arrhythmia, such as ventricular tachycardia (VT) and ventricular fibrillation (VF), which account for 60-100% of deaths during the acute phase of AMI (4,5). Identification of the culprit vessel and blockage sites of AMI with malignant arrhythmia is one of the most heated research subjects.

Twenty-two male swine, weighing 26.32±2.15 kg and 3-4 months of age, were purchased from Jiangsu Academy of Agricultural Sciences and successfully passed inspection and quarantine.

Twelve hours after a preoperative preparation, animals received oxygen inhalation (3 L/min), an intramuscular injection of ketamine (20-25 mg/kg) and atropine (0.5 mg) to induce anesthesia as described by our group previously (9,10). Swine were fixed in a supine position on the workstation, and access to the marginal ear vein was established. Pentobarbital sodium (3% solution; 60 mg/kg) was intravenously injected into the swine to induce a deep anesthetic state. During the operation, ketamine (100 mg) was injected intravenously every 20-30 min according to body motion to maintain anesthesia. After injection with 2% lidocaine for local anesthesia of the right groin of the swine, the right femoral artery was punctured to create AMI (11). Continuous ECG monitoring and vital sign changes were monitored during the procedure.

The animals were randomly divided into three groups according to the blocked sites of the balloon: group 1, control group (n=4), with catheter balloon inserted into the LAD, but without LAD occlusion; group 2, the bottom-third-blocked LAD group (n=9); and group 3, middle-site-blocked-LAD group (n=9). The femoral artery was punctured and a sheath was implanted with a guide wire inside. Diluted heparin (6,000 u) was injected intravenously and an additional 2,000 u was given every l h during the operation. The imaging tube was sent retrograde through the sheath to the coronary opening for angiography. The position for blocking was determined according to the imaging results for the bottom-third-blocked and middle-site-blocked-LAD groups. The balloon catheter (2.5-3.5 mm × 15 mm) with the guide wire was inserted through the sheath. The balloon was opened with six atmospheres to block the LAD for 90 minutes (12-14). Then the blood perfusion was restored. Continuous 12-lead ECG monitoring was applied during the whole procedure. If premature ventricular contractions (PVCs) were observed, the lidocaine and amiodarone dosage was increased. If VT was shown, intravenous lidocaine and amiodarone were given immediately. If VF appeared, an immediate 360 J external defibrillation and external chest compression was given until the restoration of sinus rhythm (15). Before and after the model creation, indexes including hemodynamics, ECG, myocardial enzymology and artery blood gas were collected to confirm the establishment of the model. The establishment of the model was assessed by ST elevation and the occurrence of pathologic Q wave, and confirmed by the pathological analyses of the hearts after the animals were sacrificed.

Arrhythmia monitoring and evaluation of AMI and ventricular fibrillation-cardiac arrest

Statistical tests were performed in SPSS version 16.0 (SPSS Inc., Chicago, IL, USA). Quantitative variables were expressed as mean ± SD and compared using an unpaired Student’s t-test or ANOVA test. Kruskal-Wallis H tests and Mann-Whitney U tests were used when the data did not met the normal distribution criteria or homogeneity of variance. Qualitative variables were compared using the χ2-test, unless otherwise indicated. A two-tailed P value of less than 0.05 was considered statistically significant. 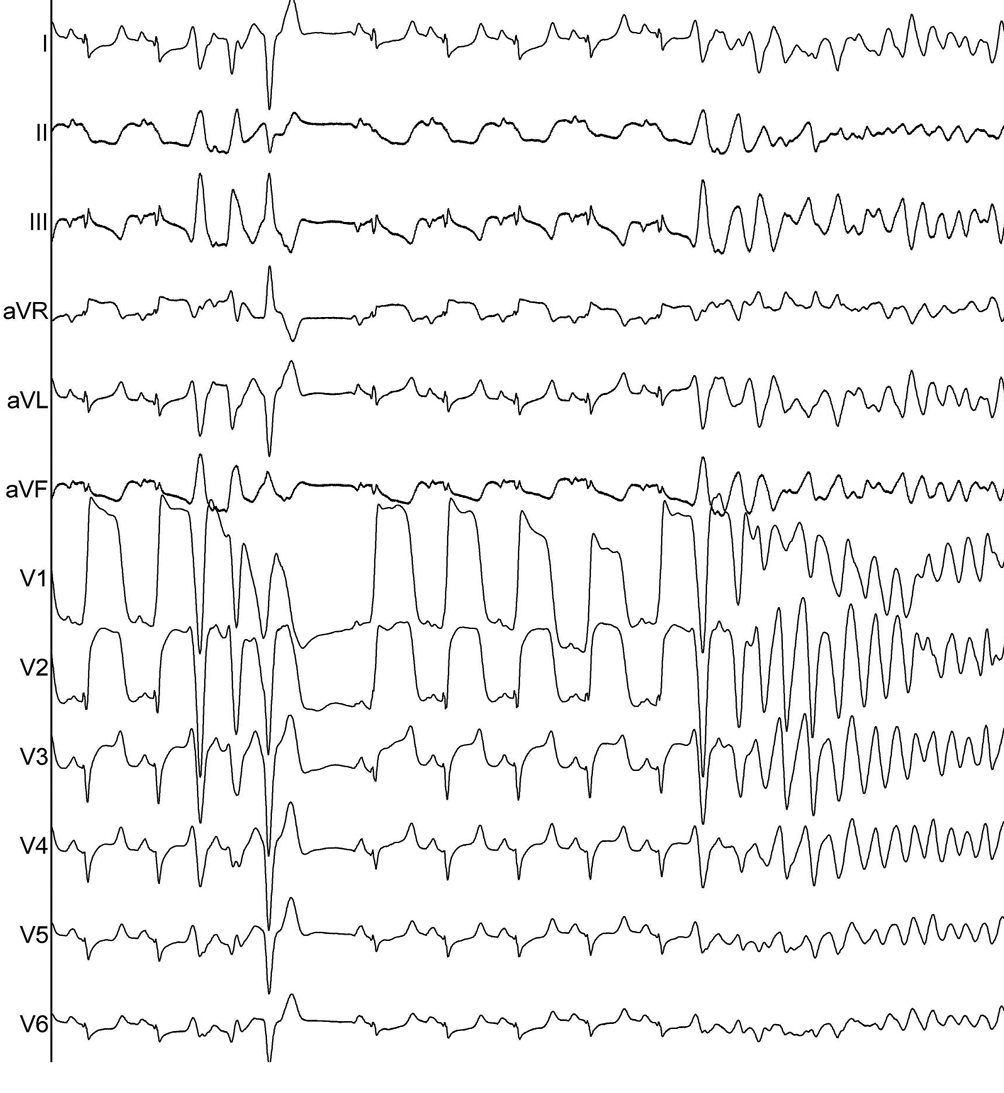 Malignant arrhythmias are the main causes of sudden cardiac death following AMI. To predict the severity and the prognosis of an AMI, changes in hemodynamics, ECG and myocardial enzymology indexes are usually observed in the clinic (17).

The structure, size and coronary circulation of the swine heart are similar to that of humans. It is very similar to pathological changes of AMI in humans to block the swine coronary artery branches to induce myocardial infarction, and this has significant implications for research on the pathological physiology and the treatment of AMI. Since there are few branches of the swine coronary artery, it is hard to establish collateral circulation. A swine’s cardiac conduction system also has a poor tolerance to ischemia and hypoxia. Therefore, large infarction area and various malignant arrhythmias can occur easily when the main coronary arteries, especially LAD, are occluded (18). The occlusion of LAD not only leads to massive myocardial ischemia and necrosis, but also influences the cardiac conduction system. Cardiac cell membrane potential decreases and creates the conduction abnormality such as VT and VF, which have led to extremely high mortality rates (19,20). The main reasons for VF include formation of the turn-back ring following acute myocardial ischemia and an increase in automaticity as the base of ventricular arrhythmia, and the low threshold of the ventricular fibrillation in swine, which is easily induced by ischemia and reperfusion (21).

In the present study, an AMI model was created by occluding the bottom-third-site or the middle-site of LAD through balloon angioplasty, suggesting that VT incidence was not statistically different between the two infarction groups. However, the incidence of VF in the middle-site-blocked group was significantly higher than that of the bottom-third-blocked group. This offers a good reference for further studies on prediction indexes of malignant arrhythmia after AMI occurrence.

The location of AMI is correlated with blood supply area of coronary artery branches. A large area infarction caused by LAD occlusion is usually accompanied by shock, left ventricular dysfunction, severe hemodynamic disorder and ventricular arrhythmia. This would lead to an increase in left ventricular end diastolic pressure and pulmonary venous pressure, and to pulmonary interstitial and alveolar edema, decrease in lung compliance and in alveolar ventilation volume, resulting in disorders of ventilation and blood flow, abnormality of diffusion function, the decrease of PaO2 and in the increase of PaCO2 (25). This study indicated that serious hemodynamic disorder existed in both groups after the AMI model establishment with significant MAP and LVEF decrease. MAP in the middle-site-blocked LAD group was significantly lower than that in bottom-third-blocked-LAD group. In addition, compared with that before model establishment, PaO2 decreased significantly while PaCO2 had a marked increase. Consequently, hemodynamic and blood gas analyses may, to some extent, reflect the AMI severity and its prognosis.

In conclusion, LAD occlusion positions affected the occurrence of malignant arrhythmia in an AMI model established by blocking swine LAD through balloon angioplasty. The changes of hemodynamic, ECG, myocardial enzymology and artery blood gas indexes may help us to predict the severity and prognosis of AMI. Since the present study is based on animal experiments, it may not fully reflect the pathophysiological characteristics of clinical patients. Large-scale and multi-center studies of clinical application are needed to confirm the results and to provide more valuable evaluating indicators for risk stratifications of early AMI patients.