Extracorporeal membrane oxygenation (ECMO) can be a life-saving tool in acute cardiopulmonary collapse. However, ECMO itself is a major cause of life-threatening complications such as thromboembolism because of the artificial surface of the circuit persistently reacts with blood components, especially coagulation factors. To minimize thromboembolic complications and maintain patency of the circuit, proper anticoagulation is essential during ECMO. Unfractionated heparin (UFH) is the most widely used anticoagulant in ECMO owing to its cost-effectiveness and easy reversibility with protamine sulfate. However, bleeding remains a major concern with UFH and can occur in up to 36% of patients (1). Although there is a report about low heparin dose protocol which reduced bleeding complications, the data was not enough to draw the correlation (2). Accordingly, the need for alternative drugs to UFH has been suggested.

Nafamostat mesilate (NM) is a serine protease inhibitor and could inhibit proteinase-activated receptors, resulting in a reduced complement cascade activation, leukocyte activation, and platelet aggregation. Because of its antithrombin and antiplasmin effects, NM has been used clinically in disseminated intravascular coagulopathy and as an anticoagulant in patients on hemodialysis. It has previously been widely accepted as an anticoagulant in hemodialysis due to reduced bleeding complications and its equivocal anticoagulation effect (3). Recently, several studies proposed NM as an alternative anticoagulant to heparin during ECMO because it has fewer bleeding complications and a comparable rate of thromboembolic episodes (4). However, there is also a report that NM increased bleeding complications (5) and this drug still has a debated effect. The aim of this study was to evaluate the clinical outcomes of ECMO on NM with a focus on thromboembolic episodes and bleeding.

We retrospectively reviewed 102 consecutive ECMO runs at Chungnam National University Hospital between January 2011 and December 2017. Any ECMO runs that were not anticoagulated for any reason, or had a duration of less than 24 h (n=11), were excluded. Finally, a total of 91 ECMO runs on 87 patients were included in the study.

The primary endpoints were bleeding and thromboembolic episodes. Bleeding episodes included: (I) any bleeding from the cannulation or surgical site requiring surgical intervention; (II) cerebral hemorrhage; (III) gastrointestinal bleeding, and (IV) airway bleeding requiring the initial anticoagulant to be stopped or changed. Thromboembolic episodes included: (I) any intracardiac thrombus or circuit thrombosis; (II) embolic stroke, and (III) any type of image-proven systemic thrombosis.

An initial UFH bolus of 50–100 units/kg, according to the patient’s body weight was administered at the time of cannulation for ECMO, typically followed by continuous infusion of NM or UFH. NM was infused hourly at a dose of 0.5 mg/kg of body weight and UFH was infused continuously at a dose of 7.5–20.0 units/kg/h. The therapeutic dose of each anticoagulant was monitored according to the activated coagulation time (ACT) or activated partial thromboplastin time (aPTT). All patients were monitored by at least one of the both methods or both. Target values for ACT were 150 to 200 s, and those for aPTT were 55 to 70 s.

The present study was reviewed and approved by the ethics committee of Chungnam National University. The requirement for individual consent from patients or relatives was waived accordingly.

During the study period, a total of 91 ECMO runs on 87 patients were identified. Of the 87 patients, 47 (54.0%) patients were successfully weaned and 29 (33.3%) survived to discharge. Most of the runs were anticoagulated with NM (n=68, 74.7%), followed by heparin (n=22, 24.2%) and argatroban (n=1, 1.1%). The mean duration of ECMO support was 11.3±11.1 days. The overall incidence of bleeding was 46.2% (n=42) and that of thromboembolic episodes was 12.1% (n=11). In the NM group, the incidence of hyperkalemia requiring any type of intervention was 17.6% (n=12). Many of the baseline characteristics between the UFH group and NM group were not significantly different (Table 1). However, the UFH group had significantly more venovenous (VV) ECMO and respiratory cases. On the other hand, this group had fewer cases of post-cardiotomy syndrome. 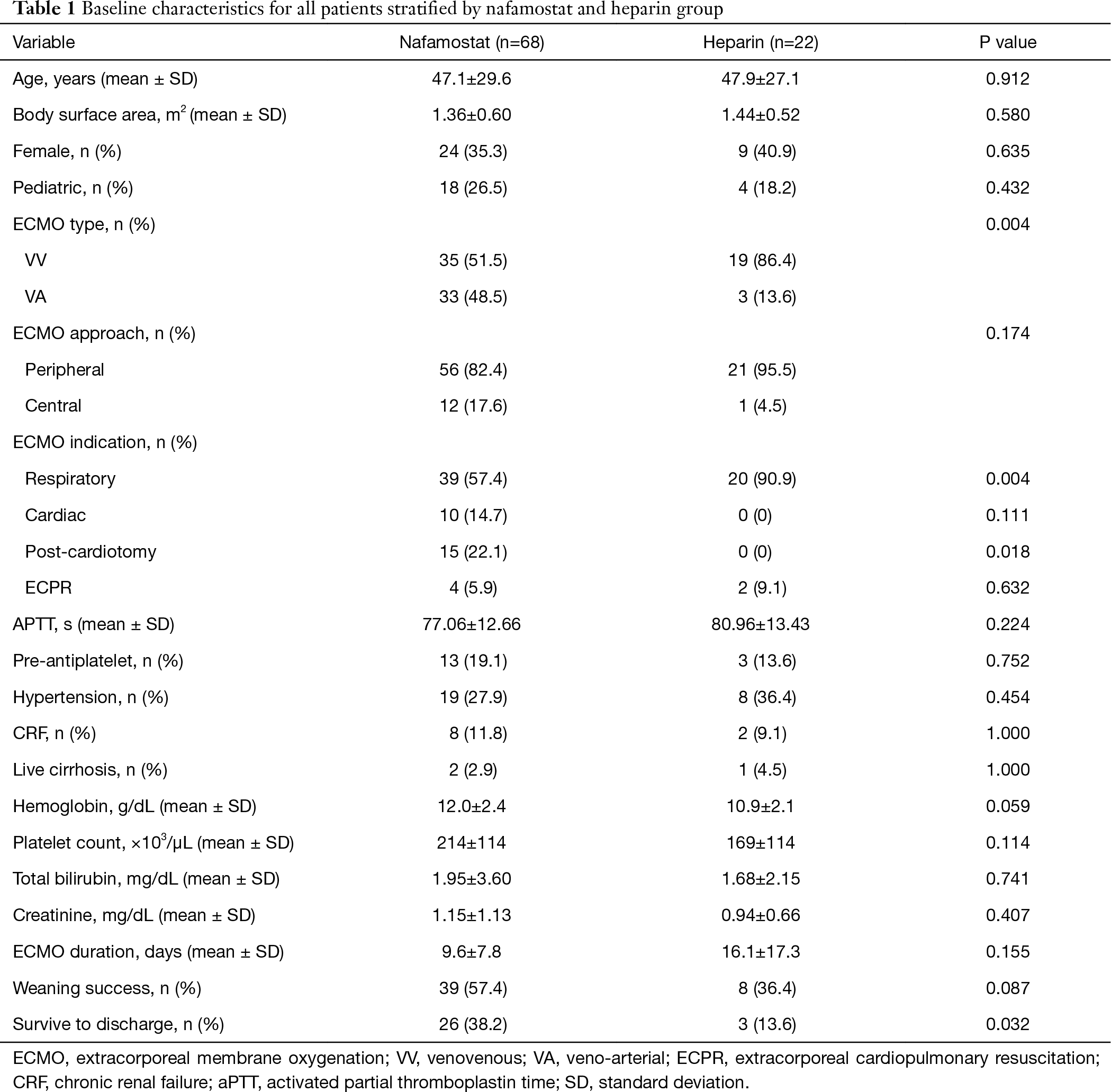 The mean level of aPTT during ECMO run was not significantly different between two groups (NM: 77.06±12.66 s vs. UFH: 80.96±13.43 s, P=0.224). Regarding the primary endpoints, the NM group tended to experience less bleeding than the UFH group (38.2% vs. 72.7%, P=0.005). However, there were 3 cases of cerebral hemorrhage in the NM group on contrary to the UFH group which was none. There were no significant differences in terms of thromboembolic episode rates (13.2% vs. 9.1%, P=1.000) (Table 2). However, regarding major thromboembolic complications, there were 3 case of cerebral infarct in the NM group which was none in the UFH group. 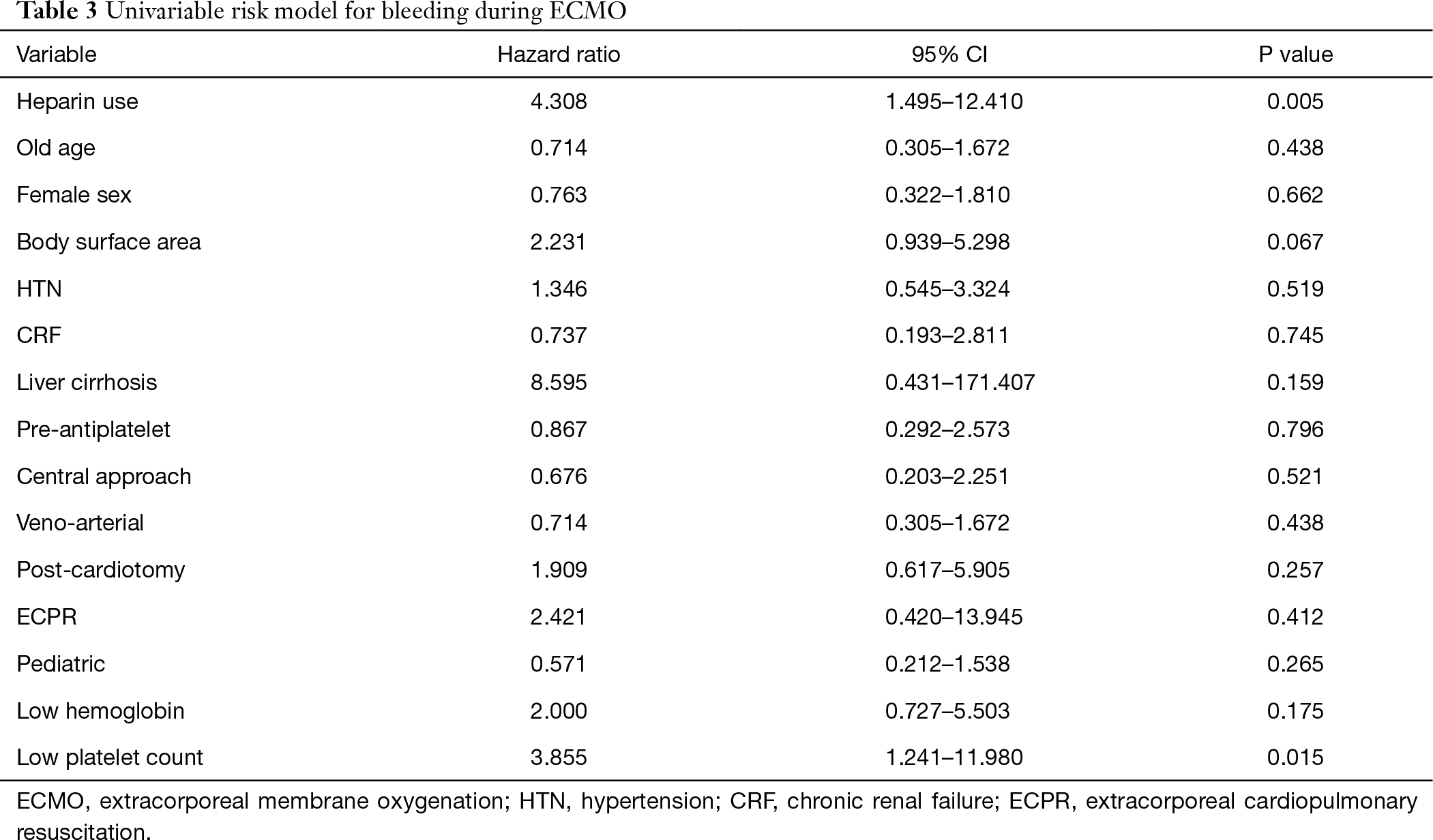 Currently, ECMO is one of the most important life-sparing methods in patients with acute cardiopulmonary failure (6). However, contrary to its ease of accessibility and efficiency of resuscitation, ECMO carries a potential risk of thrombosis (7). Continuous contact between circulating blood and the foreign surface of the ECMO circuit shifts the normal physiologic hemostatic balance to a hypercoagulable state. To suppress this shift, the use of anticoagulation during ECMO is essential. UFH is the most widely used anticoagulant in ECMO owing to its cost-effectiveness and easy reversibility with protamine sulfate. However, there remains the problem of bleeding complications related to systemic heparinization; this occurs in up to 60% of patients and directly affects prognosis (8). This concern lead to low heparin dose protocol to reduce bleeding complications during ECMO but the correlation is not clear (2).

NM is a serine protease inhibitor that attenuates coagulation, fibrinolysis, and platelet aggregation. Previously, NM was widely accepted as an anticoagulant in hemodialysis because of reduced bleeding complications and its equivocal anticoagulation effect (3). Recently, several studies proposed NM as an alternative anticoagulant to heparin during ECMO. In their large animal experimental study, Han et al. reported that NM showed a similar anticoagulation effect to UFH according to thromboelastography results. Additionally, they noted that NM had an anti-inflammatory effect during ECMO (9). Moreover, the heparin group (60.8%) had more complications related to bleeding than the NM group (23.5%). They also reported that the NM group received significantly fewer transfusions (4). Lim et al., however, reported conflicting results in their clinical study, they found that bleeding complications were significantly higher in the NM group in both the unmatched and matched cohorts (P=0.03), whereas thromboembolic events were comparable (5). The reason for their conflicting results might be related to different baseline characteristics between two groups. In their study, NM group tended to have more liver cirrhosis and low platelet count which might contributed to increased incidence of bleeding complications. Other contribution factors might be their less mean duration of ECMO time (<100 h) and selected indication for ECMO [100% veno-arterial (VA) ECMO cases].

In the present study, the overall incidence of bleeding was 46.2%, which is higher than that of other reported studies. This result might be due to the use of a much wider definition of bleeding complications. However, we followed the definition of the Extracorporeal Life Support Organization (10). The main source of bleeding was the cannulation site, followed by the surgical site, airway, gastrointestinal system, and brain. This is similar to a previous study by Aubron et al. (8) which compared NM and UFH groups. In that study, bleeding was significantly higher in the UFH group (72.7%). Even though the UFH group had more cases of VV and fewer of post-cardiotomy indication in our study, this would not contribute to the difference between the studies, because the VV type is usually a protective factor and post-cardiotomy indication is a risk factor for bleeding complications.

Although NM group had less cases of bleeding complications in our study, the concern is rate of major complications regarding cerebral hemorrhage and cerebral infarction was much higher in NM group. It might be related to preexisting risk factors for cerebrovascular accident in NM group. Because the NM group had more cardiac cases, especially post-cardiotomy cases on contrary to UFH group which had more respiratory cases.

There are several known predictors of bleeding during ECMO. Previously, Kasirajan et al. reported that heparin use and thrombocytopenia have a positive correlation with intracranial hemorrhage during ECMO (11). Werho et al. reported that post-cardiotomy indication is an independent risk factor for hemorrhagic complications during ECMO, especially in pediatric patients (12). Smith et al. showed that cardiac and extracorporeal cardiopulmonary resuscitation patients tend to receive significantly more red blood cell transfusions during ECMO (13). In our analysis, the use of heparin and a low platelet count predicted bleeding on univariate analysis. Finally, according to multivariate analysis, heparin use was the major bleeding risk factor during ECMO. However, other reported risk factors, such as low fibrinogen level (14) and preoperative coagulation abnormalities (15) were not considered in our analysis; these unmeasured confounders may have affected the results.

Several limitations of our study should be noted. First, it used a retrospective, single-institution design and the number of subjects in the UFH group was relatively small. Second, we are not certain that the anticoagulation in the NM group was completely effective because there is no consensus regarding the most effective NM regimen during ECMO. Third, our study only focused on the incidence and predictors of bleeding complications; the impact of bleeding on clinical outcome, such as mortality, was not considered. Lastly, unmeasured factors may have acted as confounders.

In conclusion, NM appears to be associated with fewer bleeding complications during ECMO and does not increase the incidence of thromboembolic episodes, although it should be borne in mind that this was a small study. However, further studies with larger numbers of cases and a prospective design should be performed to validate our findings.

Conflicts of Interest: Meeting presentation: The 50th Anniversary of the Korean Society for Thoracic and Cardiovascular Surgery in conjunction with the 9th International Thymic Malignancy Interest Group Annual Meeting (ITMIG2018).

Ethical Statement: The authors are accountable for all aspects of the work in ensuring that questions related to the accuracy or integrity of any part of the work are appropriately investigated and resolved. The present study was reviewed and approved by the ethics committee of Chungnam National University (No. CNU 2019-05-049). The requirement for individual consent from patients or relatives was waived accordingly.