Oesophageal carcinoma is the 8th most common cancer worldwide and the 6th leading cause of cancer-related death, and the 5-year survival rate is only 15–25% worldwide (1). In China (2), the estimated number of new oesophageal cancer cases and deaths per year are 477.9 and 375.0 thousand, respectively.

Oesophagectomy with 3-field lymphadenectomy increases the overall 5-year survival rate to 40–55.6% (3-7). However, this technique also increases the complexity of the operation and complications (5-9), especially the dissection of lymph nodes (LNs) around the recurrent laryngeal nerve (RLN) (10-12). Furthermore, not all patients can benefit from the dissection of the RLN LNs (11,12). Prediction of RLN LN metastasis will provide a reference for planning the treatment regimen, selecting the surgical approach and planning for intraoperative LN dissection. Therefore, we retrospectively analysed the clinicopathological data of 265 consecutive oesophageal squamous cell carcinoma (ESCC) patients who underwent oesophagectomy at the General Hospital of the Jinan Military Area and the Second Affiliated Hospital of Shandong University to formulate a statistical model to accurately predict RLN LN metastasis in thoracic ESCC patients.

In this retrospective study, a total of 542 consecutive patients who underwent curative oesophagectomy for oesophageal carcinoma at the General Hospital of the Jinan Military Area and the Second Affiliated Hospital of Shandong University between January 2015 and June 2018 were studied. The clinicopathological data of 265 patients who met the following conditions were collected.

The inclusion criteria were as follows: (I) preoperative or postoperative pathology proven to be primary ESCC; (II) no distant metastasis found on thoraco-abdominal enhanced computed tomography (CT), cervical ultrasonography, electronic gastroscopy, endoscopic ultrasound and (or) whole-body positron emission tomography CT (PET-CT); (III) underwent thoracoscopic-assisted tri-incisional oesophagectomy performed with two- or three-field lymphadenectomy and complete dissection of the RLN LNs; and (IV) complete clinicopathological data. The exclusion criteria were as follows: (I) patients who accepted neoadjuvant chemotherapy or radiotherapy (cases treated by neoadjuvant therapy usually come into pathological changes that cannot be well elucidated by this issue); (II) cases that were combined with other malignant tumours; (III) pathological results revealing other cellular components in addition to squamous cell carcinoma; (IV) patients in whom RLN LN dissection was not performed (postoperative pathological evaluation showing that the number of bilateral RLN LNs was zero); or (V) incomplete clinicopathological data. 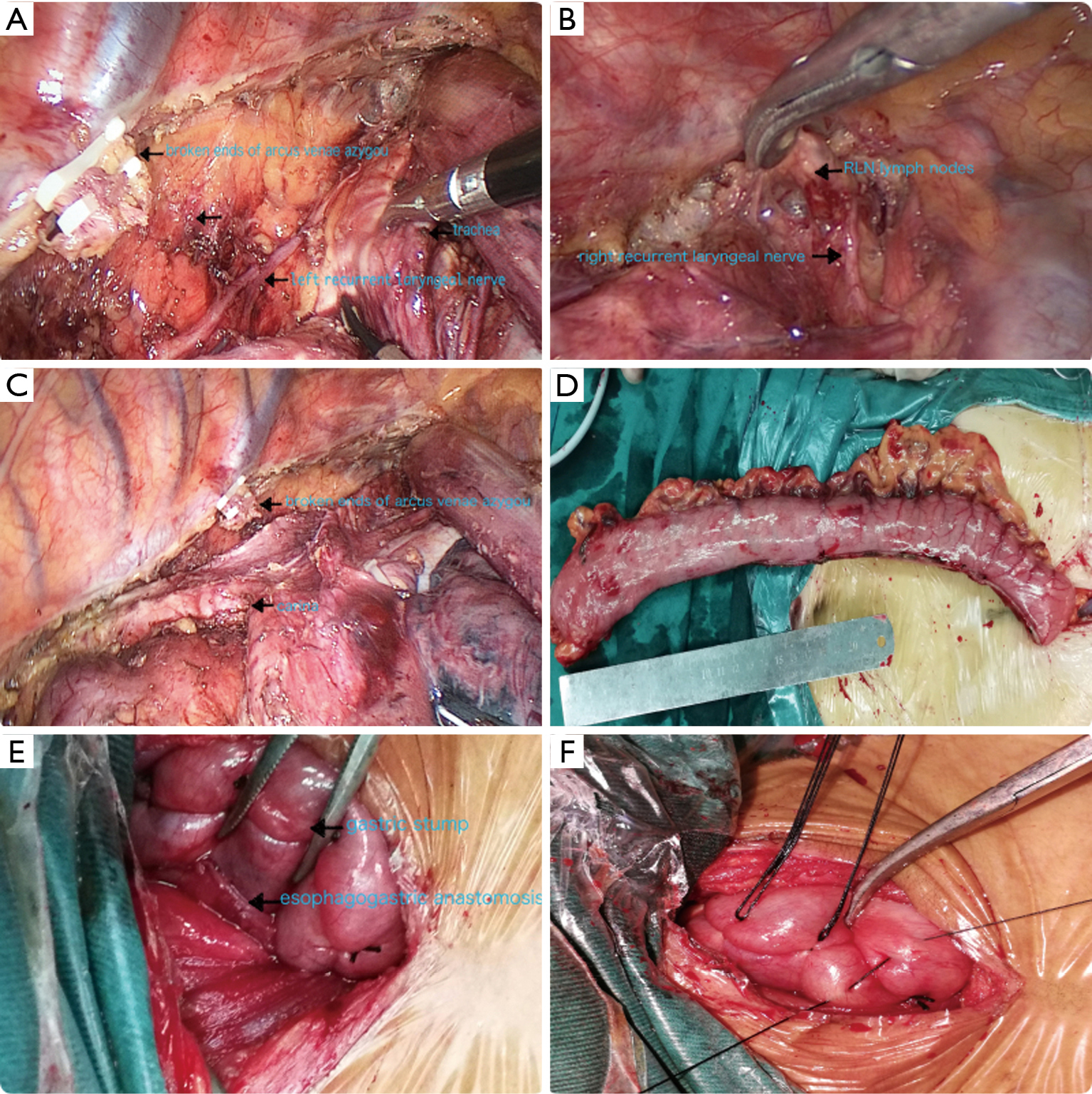 The left RLN LNs were dissected as follows. First, the upper thoracic oesophagus was removed from the oesophageal bed, and the left RLN was dissected from the dorsal side of the aortic arch and moved upward to the left tracheoesophageal groove. LNs and surrounding fatty tissues around the nerve were completely dissected (Figure 1A). The right RLN LNs were dissected as follows: we first exposed the right subclavian artery by removing the mediastinal pleura above the azygos arch. The right RLN originates from the vagus nerve trunk at the level of the right subclavian artery and extends upward to the lower pole of the thyroid. The LNs together with the surrounding fatty tissues were removed carefully (Figure 1B).

Surgically dissected LNs were classified according to the definition of regional LNs, given individual names or numbers and sent to pathologists. The LNs that were dissected en bloc with the oesophagus were isolated from the specimen before fixation. All of these primary tumour samples were fixed in 10% neutral buffered formalin, embedded in paraffin and stained with haematoxylin and eosin in a routine manner.

This study was reviewed and approved by the Ethics Committee of the General Hospital of the Jinan Military Area (JN2018012) and the Second Affiliated Hospital of Shandong University (SD20180131). All patients provided written informed consent for their procedures.

Statistical analysis was performed with SPSS 19.0 software (SPSS Inc., Chicago, Illinois, USA). Measurement data conforming to a normal distribution are described as the mean ± standard deviation. The risk factors for RLN LN metastasis included deviation. The Levene test was used to judge the homogeneity of variance. Independent sample t-tests (two-sided) were used for inter-group comparisons. Numerical data are expressed in terms of frequencies and percentages and were compared by the Pearson χ2 test (two-sided); Fisher’s exact test was used when the expected frequencies of one or more cells were less than 5. The risk factors for RLN LN metastasis were analysed by univariate analysis, and variables with a P value <0.1 were entered into multivariate logistic regression to formulate a model for predicting RLN LN metastasis. The Hosmer-Lemeshow goodness of fit test and the area under receiver operator characteristic (ROC) curve (AUC) were calculated to evaluate the model. By using R software, we constructed the nomogram according to the results of the logistic regression analysis. 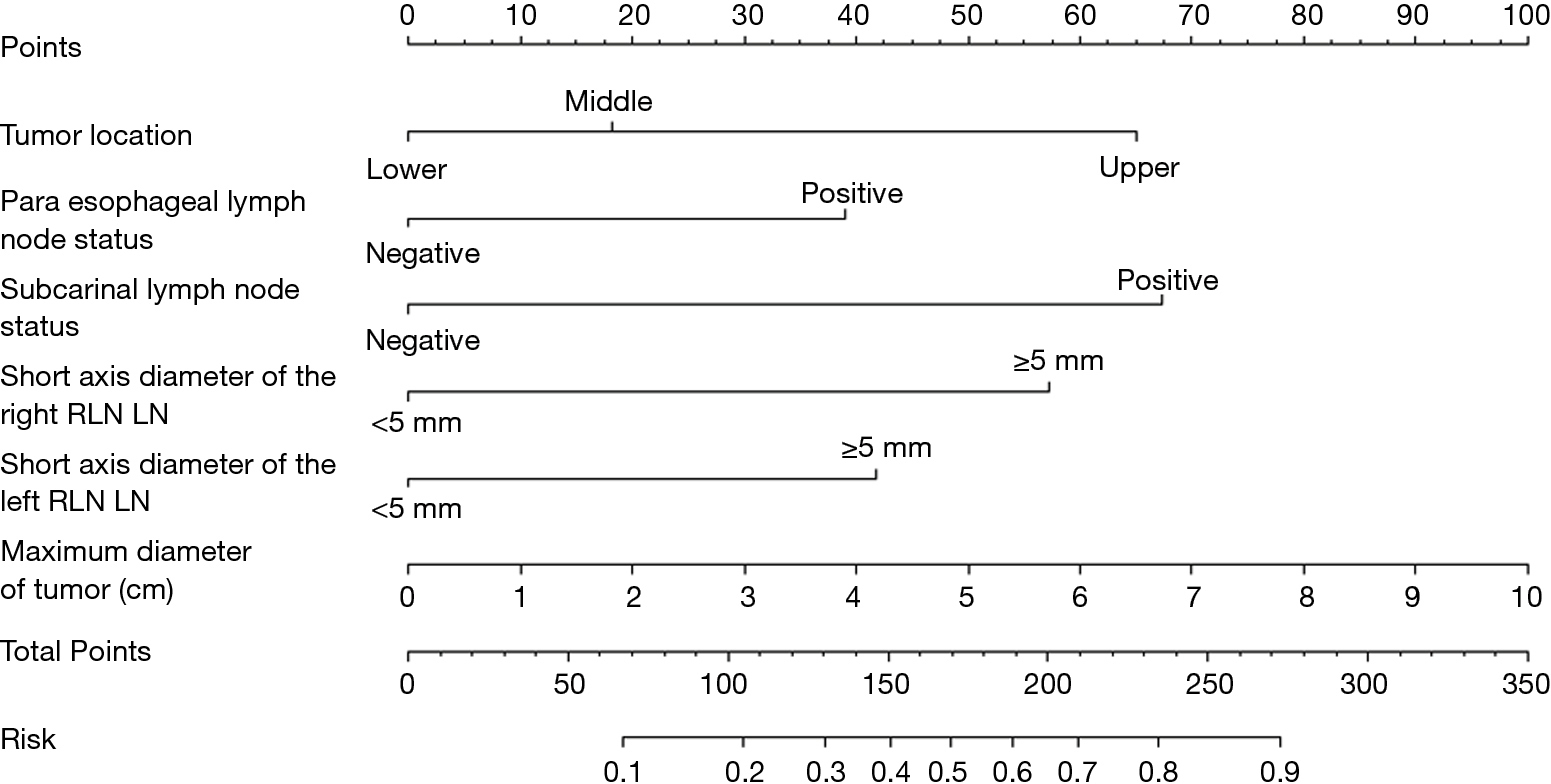 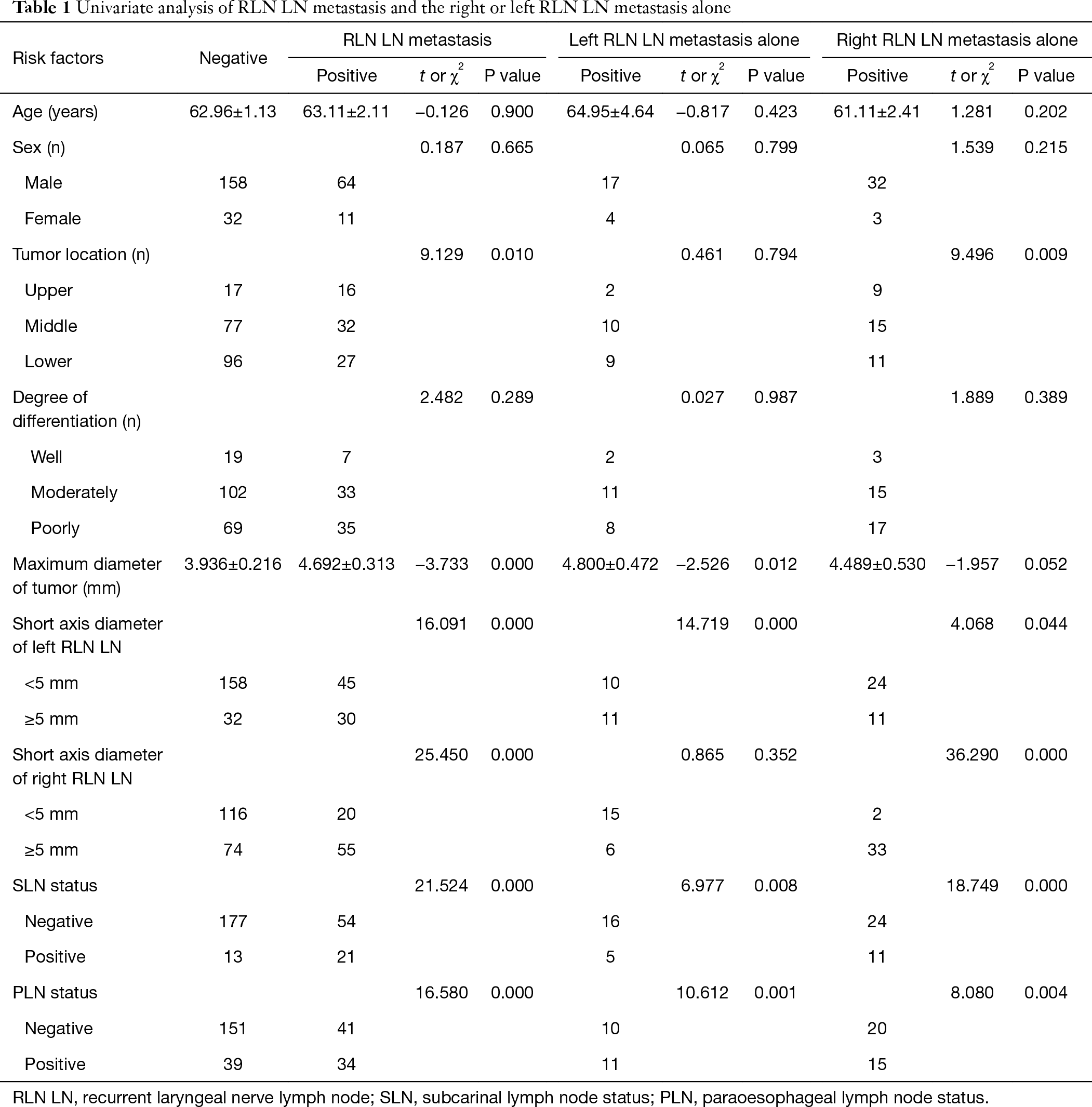 The Hosmer-Lemeshow test calculated that χ2 =4.901, P=0.768. A ROC curve was constructed according to the regression model (Figure 2A), and the area under the ROC curve (AUC) was 0.809 (95% CI: 0.754–0.864). When a predictive probability =0.143 was used as the cut-off value, the sensitivity and specificity of the nomogram for predicting RLN LN metastasis were 94.7% and 43.7%, respectively. The nomogram (Figure 3) constructed according to the regression model included the following six variables: short-axis diameter of the left RLN LN, short-axis diameter of the right RLN LN, maximum tumour diameter, tumour location, SLN status and PLN status.

The Hosmer-Lemeshow test calculated that χ2=1.735, P=0.988. A ROC curve was constructed according to the regression model (Figure 2B), and the AUC was 0.868 (95% CI: 0.815–0.920). When a predictive probability =0.113 was used as the cut-off value, the sensitivity and specificity of the nomogram for predicting RLN LN metastasis were 94.3% and 61.6%, respectively. The nomogram (Figure 4) that was constructed according to the regression model included the following three variables: short-axis diameter of the right RLN LN, tumour location and SLN status.

The RLN LN is one of the most common metastatic sites in oesophageal cancer, and previous research has reported that the RLN LN metastasis rate is 15–42% (19,21-23). Ye et al. (17) reported that the rates of left and right RLN LN metastasis were 15.8% and 20.8%, respectively, and Kanemura et al. (19) reported rates of 15.4% and 16.9%, respectively. Our research showed that the rates of left and right RLN LN metastasis were 15.10% and 20.40%, respectively, and the total metastatic rate of the bilateral RLN LNs was 28.3%, which was similar the results of a previous study. However, dissection of the RLN LNs causes the following problems. First, the procedure requires a trans-right thoracic resection of the oesophagus and lymphadenectomy and neck anastomosis, which leads to additional trauma. In addition, dissection of the LNs along the RLNs is technically challenging for thoracic surgeons. Above all, extensive lymphadenectomy along the RLNs leads to increased complications, such as RLN injury, pulmonary infection and anastomotic fistula (12,23-25), and leads to a poor quality of life (21). Taniyama et al. (11) showed that 36% of patients experienced RLN injuries, of which 16% were bilateral. Ma et al. (24) reported that RLN palsy occurred in 37.6% of patients. In the present study, the incidence of RLN injury was 13.6%, of which 53.8% (21/39) of cases led to subsequent pulmonary infection, which was a higher rate than that observed in the group without RLN injuries (7.9%, 18/229). Hence, surgical complications may be reduced for ESCC patients if unnecessary LN dissections are avoided.

Our statistical results showed that the short-axis diameter of the left RLN LN, the short-axis diameter of the right RLN LN, maximum tumour diameter of the, tumour location, SLN status and PLN status were all independent risk factors for RLN LN metastasis. In this study, we did not include T-stage in the multivariate analysis because it was unable to be determined preoperatively and had a strong linear correlation to the maximum tumour diameter. Endoscopic ultrasonography provides much information, but the accuracy is not satisfactory currently. Therefore, we did not include T-stage in our model in consideration of the clinical practicability. The data also showed that the rates of RLN LN metastasis for cases with SLN metastasis or not were 61.76% and 23.38%, respectively. Therefore, SLN status was a vital prognostic factor for RLN LN metastasis.

Finally, we formulated a logistic regression model and constructed a nomogram accordingly. The values of the abovementioned variables can be determined preoperatively or intraoperatively. For example, one patient with the lower third thoracic ESCC (0 points) underwent oesophagectomy, and the maximum diameters of the left (0 points) and right (0 points) RLN LNs were all less than 5 mm on CT. The maximum diameter of the tumour measured intraoperatively was 4 cm (40 points), and the intraoperative pathological analysis showed that the SLN status (0 points) and PLN status (0 points) were both negative. These six values summed to 40 points. Therefore, we determined that the risk of RLN LN metastasis was less than 0.1. As shown above, the risk of RLN LN metastasis can be determined according to the scoring system. The AUC of the model was 0.809, which proved that this scoring system had a high accuracy for predicting RLN LN metastasis.

However, our study had several limitations and shortcomings. First, our study design was retrospective, and the sample size was small; thus, selection bias was unavoidable, and further multi-institutional studies with larger sample sizes need to be performed in the future. Another limitation was the absence of clinical outcomes because of the short follow-up period. We have begun to collect prognostic information regarding RLN LN metastasis.

In summary, our study showed that upper thoracic ESCC patients with larger tumours and larger RLN LNs are more prone to RLN LN metastasis. Metastasis of the subcarinal and PLNs is also closely related to RLN LN metastasis. By quantifying the risk factors described above, we formulated a scoring system to accurately estimate the risk of RLN LN metastasis. However, the accumulation of more data and prospective studies are needed in the future to further improve the model and to provide more accurate guidance for clinical treatment.

Ethical Statement: The authors are accountable for all aspects of the work in ensuring that questions related to the accuracy or integrity of any part of the work are appropriately investigated and resolved. This study was reviewed and approved by the Ethics Committee of the General Hospital of the Jinan Military Area (JN2018012) and the Second Affiliated Hospital of Shandong University (SD20180131). All patients provided written informed consent for their procedures.