Visceral pleural invasion (VPI) comprises PL1 and PL2, which are defined as tumor invasion beyond the elastic layer and tumor invasion to the pleural surface, respectively (1). The presence of VPI reflects a poor prognosis in resected patients with lung cancer (2-4). Hence, primary tumor stage 1 (T1, measuring ≤3 cm) with VPI was upgraded to stage T2a (3–5 cm) in the 7th edition of the American Joint Committee on Cancer (AJCC) tumor-node-metastasis (TNM) classification system for patients with lung cancer (5).

In the 8th edition of the TNM classification system, further differentiation for patients with lung cancer was achieved on the basis of the results of the Lung Cancer Staging Project (6). In this new edition, T1 tumor stage was further divided into T1a, T1b, and T1c according to the measurement in centimeters of the primary tumor growth; additionally, T2 tumor stage was also divided into T2a (3–4 cm) and T2b (4–5 cm) (7). The supplementary table of T stage descriptors in the 8th edition of the TNM system indicates that T1b (1–2 cm) and T1c (2–3 cm) tumors presenting with VPI were well characterized as T2a based on their survival curves. However, this finding lacks detailed data required for direct comparisons. Therefore, we first attempted to validate the descriptors of T1 tumors presenting with VPI.

Lobectomy has been considered the standard surgery for early-stage non-small cell lung cancer (NSCLC). Considering the relatively good prognosis of ground-glass opacity (GGO) in radiological findings and the results of several studies highlighting the use of sub-lobectomy for small pulmonary nodules (≤1 cm), lobectomy for patients with small pulmonary nodules remains controversial (8-14). Therefore, the second part of this study evaluated the effect of VPI on the surgical resection of T1a-stage tumors.

The training cohort included data obtained from a set of patients selected from the Surveillance, Epidemiology, and End Results (SEER) database (www.seer.cancer.gov). SEER has been continuously collecting data from 18 different registries since 1973. Patients diagnosed with lung cancer between 2010 and 2013 were identified using the SEER database (YEAR_DX codes 2010–2013 and CS Schema v0204+ code 063). Patients meeting the following inclusion criteria were included in the analysis: (I) pathological diagnosis of NSCLC (HISTO3V codes excluding 8041–8045); (II) pulmonary surgery procedure (NO_SURG code 0); (III) pathological staging of N0M0 (DAJCC7N code 000 and DAJCC7M code 000); and (IV) VPI limited to PL0 or PL1 or PL2 (CS2SITE codes 000–020). The patient selection algorithm used in this study is described in Figure 1A.

In addition, the validation cohort comprised data from patients with NSCLC meeting the inclusion criteria described above who underwent pulmonary surgery between 2011 and 2013 at Guangdong Lung Cancer Institute (GLCI) of China. Ethical approval was obtained from the Institutional Review Board of Guangdong Provincial People’s Hospital (No. 20171009).

The GLCI cohort comprised 558 patients with surgically resected NSCLC. All patients were pathologically diagnosed as node-negative with a PL of 0–2. Using the same criteria as that applied to the SEER cohort 65, 36, and 53 of the 558 patients were categorized into the T2a-PL0, T2b-PL0, and T1-PL+ groups, respectively. The clinical characteristics of these patients are summarized in Table 2. The median follow-up period was 36.1 months (range, 0.1–66.4 months). A statistical difference in histology and surgery extension was observed between these groups, with a smaller surgical extension identified in the T1 group and a higher incidence of squamous cell carcinoma in the T2 group. Additionally, Kaplan-Meier and Cox survival analyses revealed that the pathological subtype and surgery extension had no significant effect on survival. 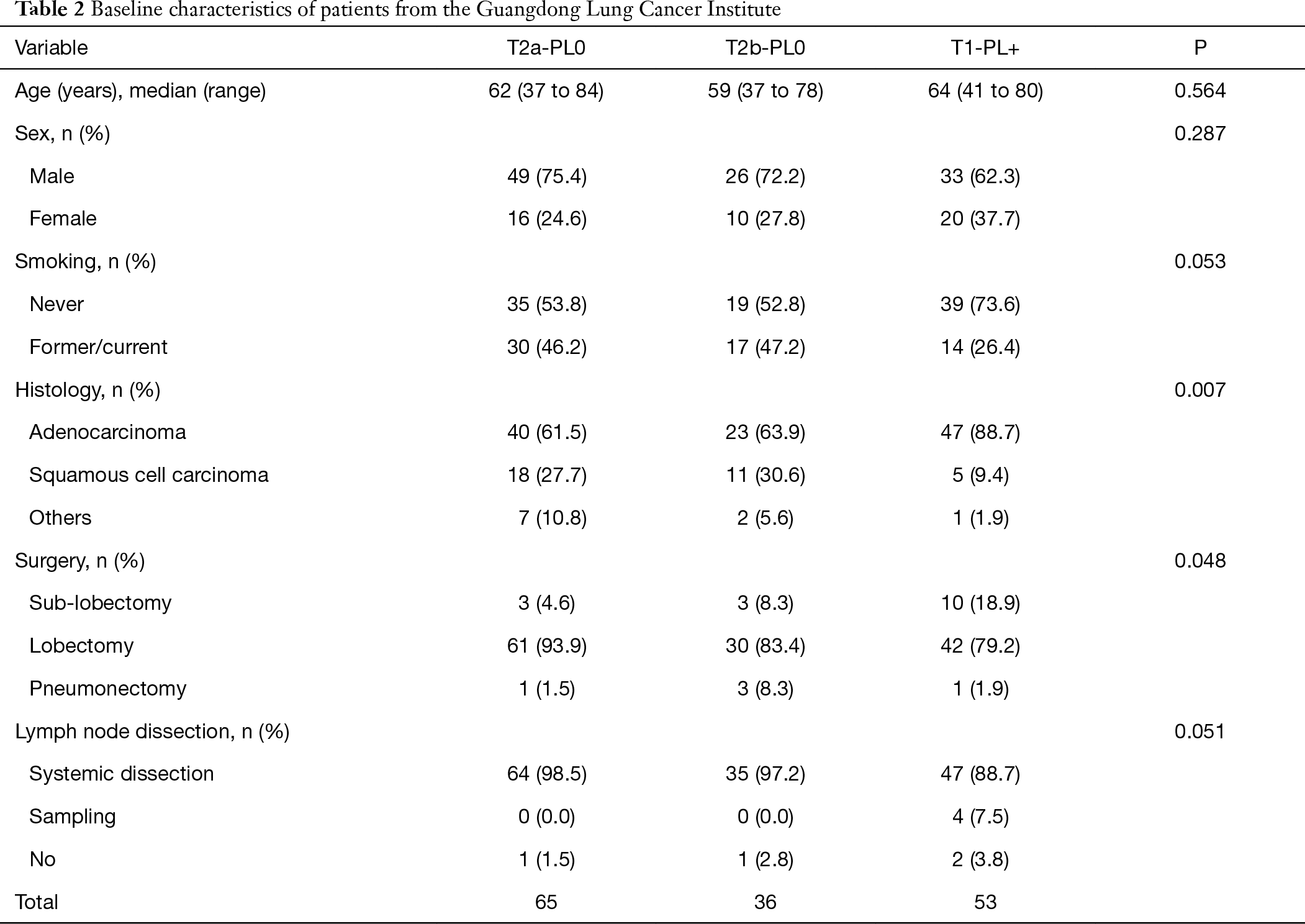 Validation of the stage of T1 tumors presenting with VPI

To further assess the differences in survival, we compared the DFS and OS among the T2a-PL0, T2b-PL0, and T1-PL+ groups in the GLCI cohort, in addition to various features classified using a heatmap, as shown in Figure 2A. There were no significant survival differences in DFS between the T1a-PL+ and T2a-PL0 (P=0.982) and T2b-PL0 (P=0.213) groups (Figure 2B). However, the T1-PL+ group had a significantly better OS than the T2b-PL0 group (P=0.047) (Figure 2C). 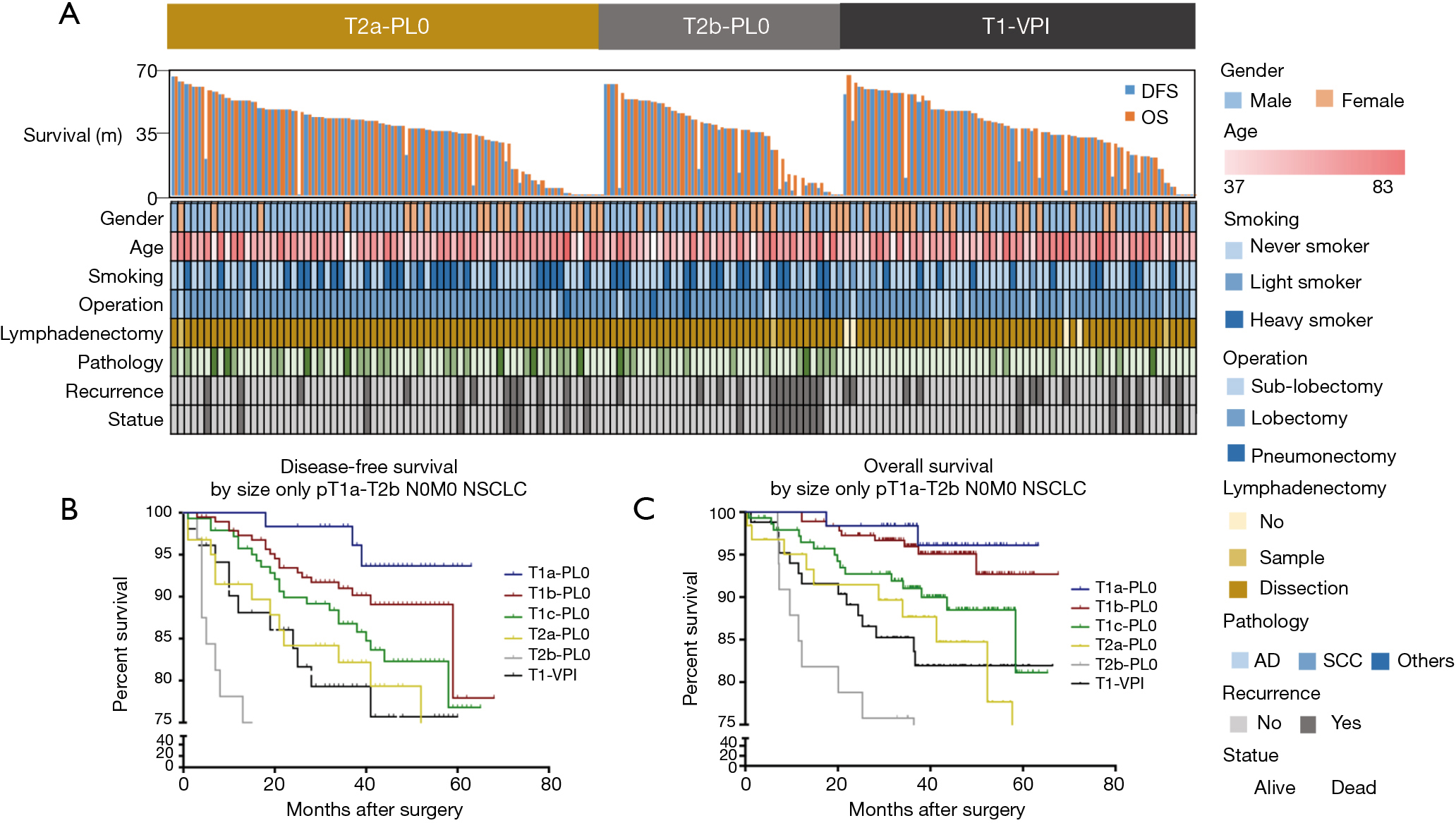 These results suggest that T1 tumors presenting with VPI were appropriately staged as T2a, consistent with the AJCC 8th edition TNM system. 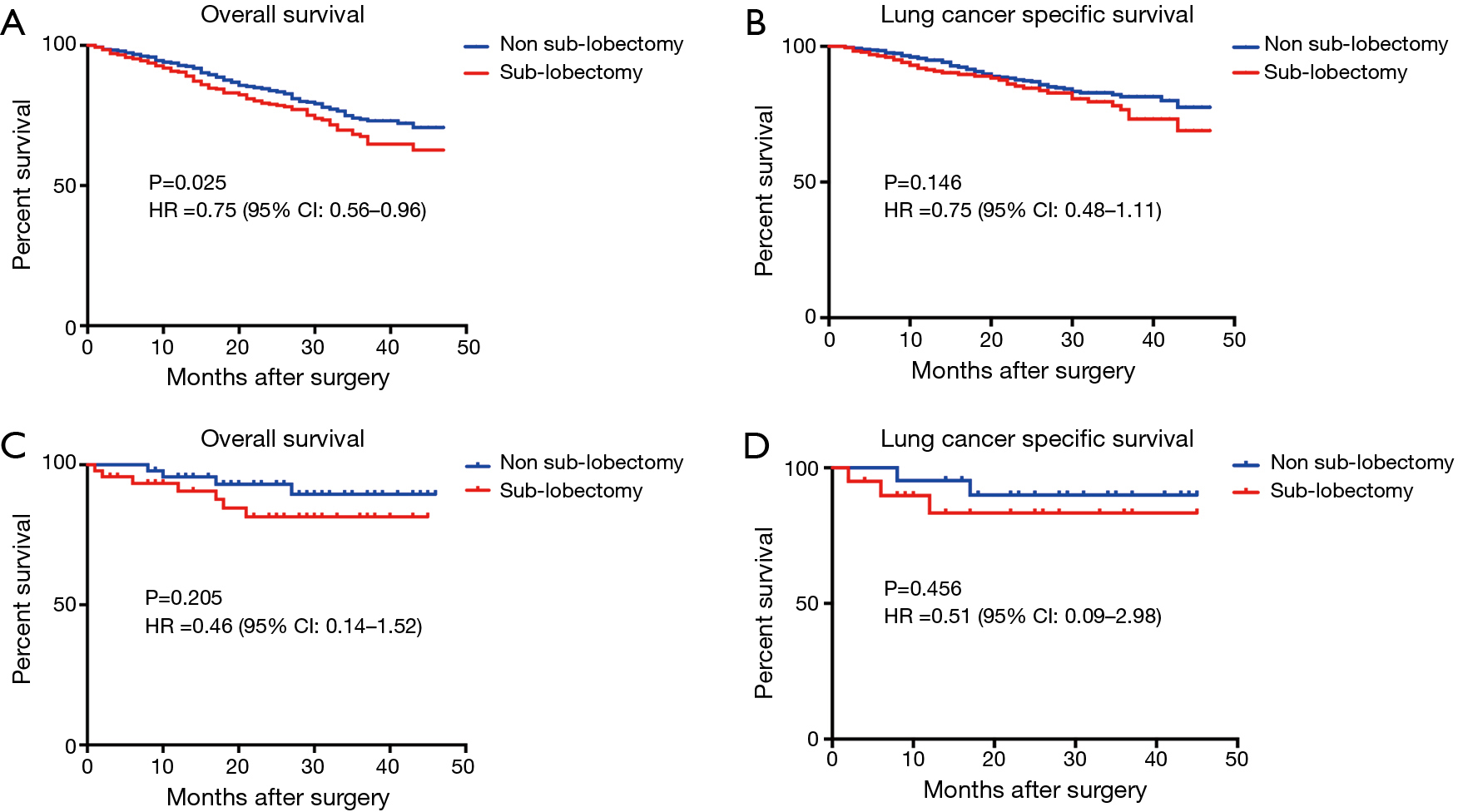 In our internal cohort, there was also a trend for superior DFS in the non-sub-lobectomy group (P=0.108, Figure 4A). In addition, the majority of patients who relapsed after surgery presented intrathoracic recurrences (69.2%, Figure 4B).

Overall, the results indicated a trend toward a superior prognosis for the non-sub-lobectomy group classified as having T1 tumors presenting with VPI, including T1a stages.

The 8th edition of the AJCC TNM staging system for lung cancer further subdivided the T stage based on evidence that each centimeter increase in tumor size separates tumors with significantly different prognoses. For instance, the previous T2a stage was divided into T2a (3–4 cm) and T2b (4–5 cm). In the proposal for T stage descriptors in the 8th TNM edition, a T1 tumor presenting with VPI was categorized as a T2a tumor (7). However, the supplementary table of the T stage descriptors of this new edition did not show survival differences between T1-PL+ and T2a (size only) and T2b (size only) stages. The vague conclusion gives rise to two reasonable concerns. First, the survival of patients with T1 tumors (0–3 cm) presenting with VPI did not differ significantly from that of patients with T2b tumors (size only). The second concern is the use of VPI as a main pathological descriptor rather than as a reliable clinical assessment, which was the focus of this new adjustment. However, from the final stage perspective, T2aN0M0 is staged as IB, which is different from stage IIA of T2bN0M0 (15). Hence, whether T1 tumors (0–3 cm) presenting with VPI should be instead designated as stage T2a or T2b requires validation.

Several studies have discussed the detrimental prognostic effect of the presence of VPI. Since the publication of the 7th edition of the TNM staging proposal for VPI status in lung cancer, a number of studies have investigated the staging complexity due to the presence of VPI. To incorporate VPI status into the 7th edition AJCC TNM classification of lung cancer, Yoshida et al. (16) first evaluated the effects of VPI on patient survival by analysis of a Japanese nationwide database, concluding that tumors <7 cm presenting with VPI should be upgraded to the next T level. Subsequently, several other publications reached similar conclusions (17-20). However, in 2013, two retrospective studies reported that the presence of VPI in small tumors in lung cancer was not strongly associated with OS or DFS, especially tumors >2 cm in size (21,22). Our study, combining data from the SEER database and our own GLCI experience, provided the largest population-based analysis of T1 staged tumors, concluding that patients with T1 tumors presenting with VPI had worse survival rates than those among patients with T1 tumors without VPI. Moreover, we validated that stage T1 tumors presenting with VPI should be upgraded to stage T2a in the 8th edition of the TNM staging system.

Considering the relatively good prognosis of GGO in radiological findings and the results of several studies highlighting the sub-lobectomy procedure, the controversy regarding the lack of scientific evidence for sub-lobectomy procedures for small pulmonary nodules (≤1 cm) has increased in recent years (10,11,14,23). Hence, the present study was designed to determine the effect of different surgical resections for small pulmonary nodules presenting with VPI. However, these data must be interpreted with caution given the rough baseline characteristics of the SEER database and limited sample size of the T1a-PL+ group. The preliminary differences between lobar and sub-lobar resection observed in this study require further validation.

More elaborate staging adjustments in the AJCC staging system also mean more work is needed to better characterize these findings. There remain limitations for the application of the 8th edition of the lung cancer TNM staging system in clinical practice. First, for sub-solid nodules, a solid component diameter for T stage was first included in the T staging system (24); however, irregular nodular morphology and inconclusive computed tomography cutoff values are major obstacles. Second, there is no change in N staging but the AJCC recommends a sub-classification method for N1 and N2, which emphasizes the metastatic lymph node location and number (25); however, this method might not be practical in the clinic, with its demand for high accuracy. Third, previous studies have confirmed the efficacy of local therapy for oligometastasis. In addition, the definition of M1b as a single metastasis site was intended to screen for these patients (26). However, this sub-classification could provide an erroneous message for surgeons, considering that there is no evidence showing that local therapy is the most effective choice for patients with stage T1b tumors. However, overall, the 8th edition of the TNM system is improved compared to previous versions.

A major limitation of the current study was the lack of statistically significant differences in OS and LCSS rates between the T1-PL+ and T2b-PL0 groups in the SEER cohort owing to their favorable prognosis and limited follow-up period. The follow-up period was also limited in our internal cohort. However, we observed a differential trend.

Our analyses of the SEER database and our institute’s experiences validated that stage T1 tumors (0–3 cm) presenting with VPI should be characterized as stage T2a tumors. In addition, surgical resection of stage T1a tumors should be considered with caution given the potential for the development of VPI. Although our work validates the new AJCC TNM staging system, the work presented here also provides evidence of the need for a future revision of the lung cancer TNM staging system based on the presence or risk of VPI development.

We appreciate the support provided by the doctors and enrolled patients at Guangdong Lung Cancer Institute.

Funding: This work was supported by grants from the National Natural Science Foundation of China (Grant No. 81673031) and Guangzhou Municipal Science and Technology (Grant No. 201704020161).

Ethical Statement: The authors are accountable for all aspects of the work in ensuring that questions related to the accuracy or integrity of any part of the work are appropriately investigated and resolved. Ethical approval was obtained from the Institutional Review Board of Guangdong Provincial People’s Hospital (No. 20171009).