Complete resection for thymoma is the most remarkable prognostic factors in thymic tumours (1,2). At initial stages, a complete and radical resection could easily be achieved with an excellent prognosis. Tumours invading lungs, great vessels or pericardium have a higher rate of R1 to R2 resection and higher risk of recurrence, and therefore, a worse prognosis can be observed (3). In locally advanced thymus tumors some factors must be kept in close observation including: local extension to large mediastinal vessels; innominate vein, superior vena cava (SVC) and pulmonary vessels, infiltration of the pericardium and distant metastases to the pleura and organ within it with or without pleural diffusion.

In 1979 Masaoka described the hemi-clamshell incision as a new way for resection of tumors of the superior sulcus. Exposure was guaranteed through a median sternotomy extended to the fourth intercostal space as well as to the base of the neck. This approach guarantees excellent exposure of the tumor and of brachial plexus and subclavian artery as well as access to the chest posteriorly (4). Hilar structures with this approach are well exposed.

In 2004, Park et al. reported a series of locally advanced thoracic tumors undergoing surgical treatment with the intention of salvage surgery. Among these tumors the approach used for the treatment of an advanced thymoma was the hemi-clamshell approach (5). Authors concluded that extended resection of thoracic structures such as great vessels and even the heart involved with thoracic malignancies can be performed with an acceptable complications rate, resulting in significant palliation and, in some cases, prolonged survival.

We read with great interest the article published by Ayako Fujiwara on the surgical resection of locally advanced thymic neoplasms approached by the hemi-clamshell incision (6). Authors reported their 6-year experience on 14 subjects undergoing extensive thymectomy where this approach was used. All patients underwent a preoperative CT scan, whilst only a few underwent a pre-operative MRI. In 8 cases the resected neoplasm was a thymoma, and in the remaining 6 cases a thymic carcinoma. The chosen approach was the hemi-clamshell in 10 patients, while in 4 cases the thoracotomy was performed after median sternotomy. Thirteen of 14 patients underwent elective pulmonary resection, and other resected organs were the phrenic nerve, the pericardium, the vagus nerve, the left innominate vein, and the aortic arch. Pleural dissemination was identified in all patients. After 5 years, 11 out of 14 subjects were living, with one dying of disease progression; at the end of follow up, 5 patients were alive and disease free.

Surgery for locally advanced thymus tumors is a highly debated topic for several reasons. Indications for aggressive surgery in certain tumor types, such as lung primaries, are less favourable due to, noticeable improvement in medical care, as well as increased applications of biological treatment and immunotherapy that has dramatically changed survival. Surgery in thymic tumors however still has a key role even in advanced cases and is in fact associated with a significant improvement in survival, as discussed later (7,8). This advanced surgery requires technical skills available in large and excellent oncological centers.

Regarding thymic tumors in which a hemi-clamshell approach is needed, the necessary considerations can be of three orders: the importance of an adequate pre-operative assessment in order to evaluate and plan the correct approach, feasibility of the replacement of the superior vena cava (SVC) when this is affected by the disease, and the prognostic advantage of a radical or non-radical resection.

All patients who are candidates for extended mediastinal surgery, in which there is the possibility of pulmonary resection, should undergo a cardiological evaluation, lung volumes tests, and a perfusion pulmonary scintigraphy if lung function is abnormal and a pneumonectomy can be planned.

The pre-operative assessment in the staging of thymic neoplasms must always include an angio-CT scan. When the CT scan is not able to discern between a mass compression of the organ or an infiltration. We always recommend performing a cine MRI. The cine MRI allows us to obtain further data on the movement of the heart and on the sliding of the structures, therefore, an infiltration of only pericardium or even of myocardium is clearer.

Ried et al. Recently reported on the positive predictive value (PPV) of the cine-MRI (50%) in comparison to CT scan (0%) with regard to myocardial tumour infiltration. The PPV for tumour infiltration of the aorta was 50%, with a higher sensitivity for the CT scan (100% vs. 50%). Infiltration of the SCV could be detected slightly better with cine MRI (PPV 75% vs. 66.7%). They concluded that cine MRI seems to improve the accuracy of preoperative staging of advanced thymoma regarding the infiltration of cardiovascular structures (9).

Replacement of the superior vena cava

The infiltration of SVC in advanced tumours of the thymus is a frequent occurrence due to the softness of the vascular wall. When this situation is present the oncological protocol indicates its removal and its subsequent reconstruction.

Indication for total caval resection and reconstruction with a prosthesis is usually indicated when the tumour has infiltrated more than 30% of the vessel circumference (10-12). Many materials have been used and described in the literature. Previously, a polytetrafluoroethylene (PTFE) conduit was used, however with increasing knowledge, biological materials were favoured, proving equally resistant, but less prone to infections, such as bovine or porcine pericardial conduit.

In our cases, we used a human cadaveric aortic allograft. The use of this biomaterial has already been described in literature, with considerable advantages (13-15). We present here a case of advanced thymoma operated in our institution with a radical thymectomy. A complete tumour excision was achieved performing a SVC resection through a hemi-clamshell approach. SVC was replaced with a cadaveric aortic allograft. A 57-year-old man, referred to our hospital for a pneumonia-like episode, presented with a chest CT showing a 7 cm mediastinal mass with infiltration of SVC, thrombosis of the left innominate vein, lymph node 2R, 4R and 7 were involved, right pleural metastases and some right lung nodules (Figure 1). FNAB identified thymoma cytology (Masaoka stage IVb). The patient underwent 4 cycles of Neoadjuvant Chemotherapy (ADOC protocol) with minimal tumour response, resolution of pleural effusion, but persistence of all other findings. A right hemi-clamshell thoracotomy was performed. The SVC was resected in the upper part at the level of the right and left innominate vein, and in the lower part at the level of the right cardiac atrial auricula. The SVC was replaced with an aortic allograft between the right innominate vein and right auricula. A right pleuropneumonectomy was also performed (Figure 2). Post-operative course was complicated by a pharmacologically cardioverted atrial fibrillation. The patient was discharged 20 days post intervention with no indication for adjuvant treatment. After 1 year follow up a contralateral lung relapse was treated with SABR. The patient survived 3 years prior to suffering a fatal heart attack. 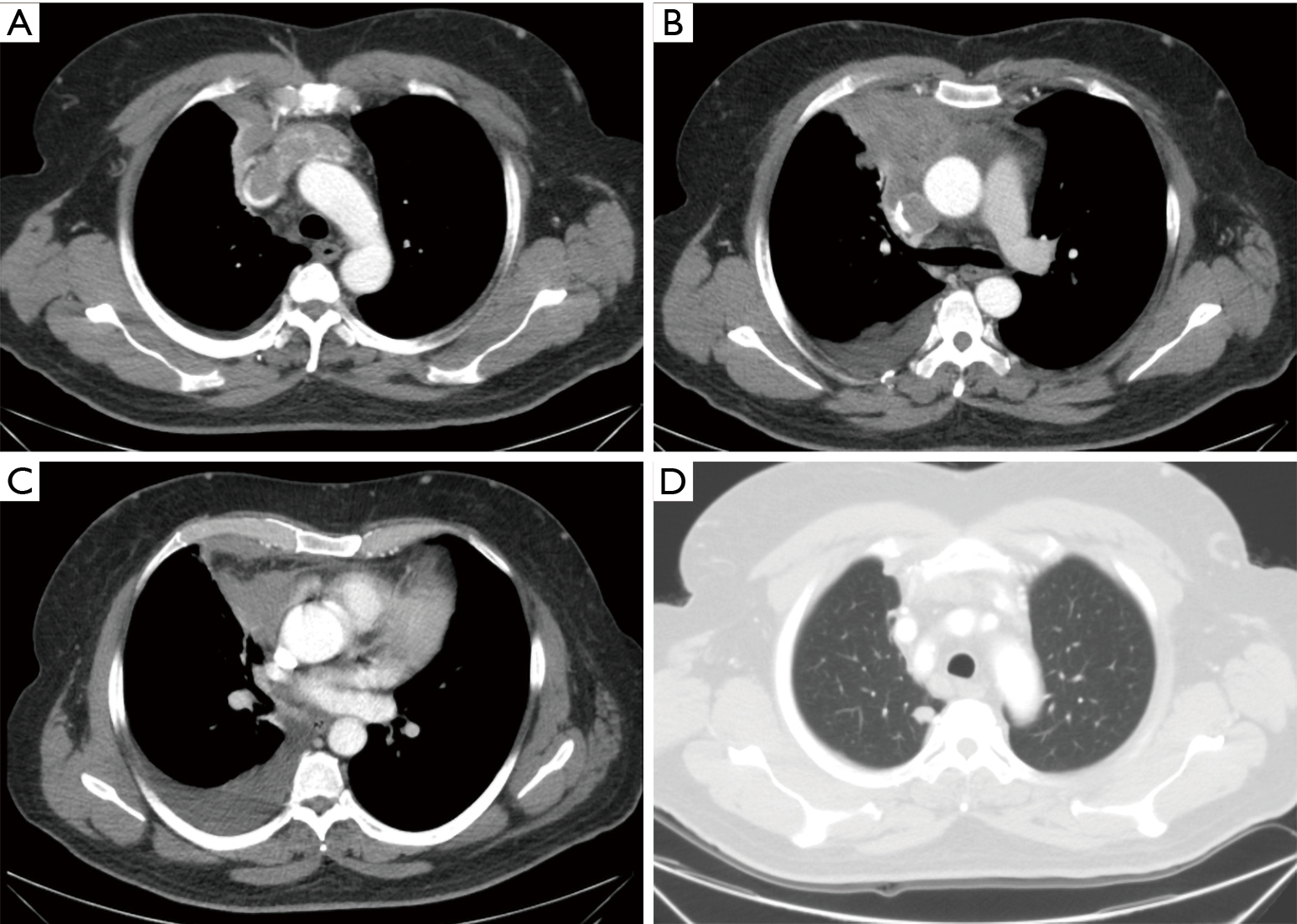 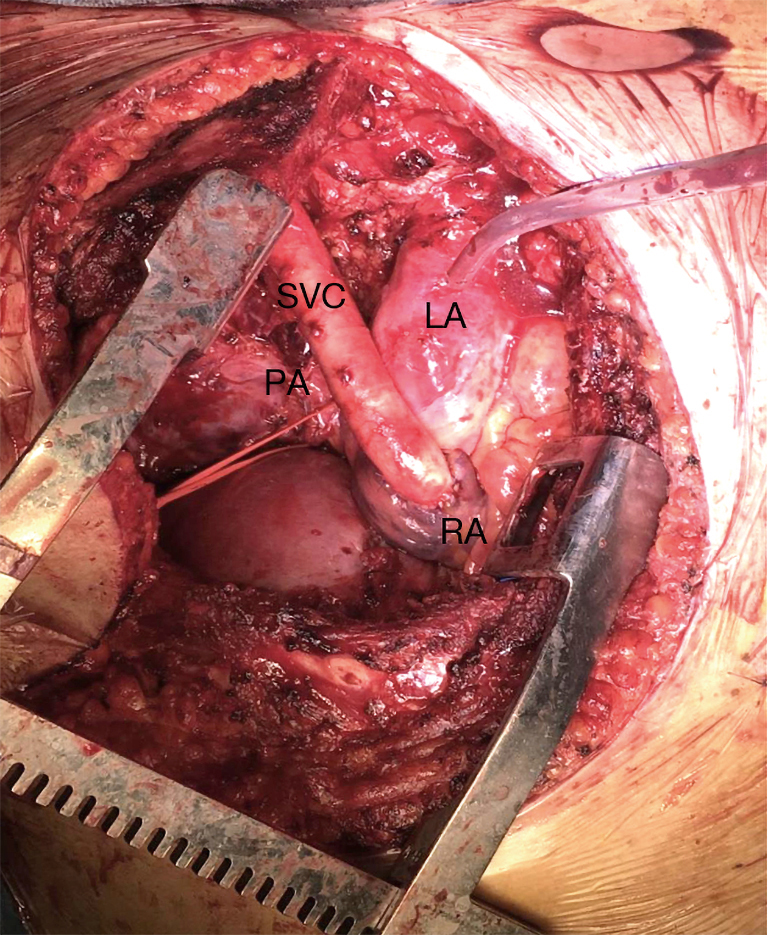 The advantages of this conduit are: the robustness of the conduit that prevents occluding kinking, the biological nature of the material preventing infection of the prosthesis. Aortic allograft does not require oral anticoagulant therapy after surgery and the cryopreservation process reduces the antigenicity of the grafts.

Thymic tumours have a predilection for pleural metastases both at initial presentation of locally advanced tumours and in case of recurrence. Minimal pleural disease is typically treated by regional or complete parietal pleurectomy in conjunction with systemic therapy (16). Extensive pleural metastases should be associated with lung infiltration and in this case it could require not only pleurectomy, but also decortication, or even pleuropneumonectomy for complete resection. Although this seems like heroic surgery, the biology of this tumour with long survival despite potential local recurrence favours an aggressive approach. Numerous case reports and some small series demonstrated satisfactory results (2,15,16).

In a series reported by Fabre et al. of 17 patients affected by Masaoka stage IVa thymoma, treated with an extra-pleural pneumonectomy, complete resection was achieved in 11 (65%) patients (7). With a median survival of 76 months and median follow-up of 59 months (range, 1–262 months), 5- and 10-year survivals were 60% and 30%, respectively. The author concluded that pleuropneumonectomy for Masaoka stage IVa thymoma was associated with a high morbidity-mortality rate, but the multidisciplinary approach in highly selected patients may provide good long-term survival.

While the use of immunotherapy and targeted biological therapies has changed the indication for radical surgery in lung cancer patients; in thymic tumours the indication for surgical resection should be considered even in locally advanced cases or stage IV cases extended to pleura due to the slow progression of both tumour and metastasis, as well as the good survival observed after local treatment of pleural or pericardial metastases. Hemi-clamshell represents the surgical approach of choice when exposure of the lung hilum is required with or without the need of a consensual pleurectomy.

Surgical treatment for stage IV tumours can be considered in select cases in which a multidisciplinary approach can be guaranteed. The hemi-clamshell approach is the preferable choice for a radical surgery on the mediastinum and to the pleural cavity. Aortic allografts exhibit an ideal conduit for replacement of the superior vena cava when involved by cancer.