Cardiovascular disease represents a leading source of health loss globally, with an estimated 422 million cases and 18 million deaths attributed to cardiovascular disease in 2015 (1). Diagnostic and therapeutic coronary catheterization (CC) are critical interventions for many of these patients, and over 1 million catheterizations are performed in the United States alone each year (2). CC can generally be performed with low peri-procedural risk. For diagnostic procedures, risk of mortality is less than 0.1% and, when combined with percutaneous coronary intervention, between 0.5% and 2% (3,4). Nevertheless, as with any invasive procedure, there are complications of varying severity associated with CC including contrast-induced nephropathy, cholesterol embolization, local vascular injury, hematoma, pseudoaneurysm, conduction disturbance, stroke and myocardial infarction (5).

A prominent early challenge with CC was adverse drug reactions (ADRs) from iodine-based contrast media. To facilitate optimal visualization during angiography, early contrast agents were extremely hypertonic. Reported rates of ADRs requiring any intervention following catheterization using these agents was as high as 30%, and most problematic in high-risk cardiac patients (6). This observation led to the development of low- or iso-osmolar, ionic and non-ionic agents (Table 1). In a randomized trial evaluating ioxaglate and iodixanol for CC (low and iso-osmolar agents, respectively), the rate of ADRs, as reported by patients and classified by investigators, was 11.9% for ioxaglate and 9.9% for iodixanol. Rates of hypersensitivity reactions were 2.5% for ioxaglate and 0.7% for iodixanol (7).

Chen and colleagues reported the incidence of ADRs, using American College of Radiology classifications, following iopromide administration to 17,513 CC patients enrolled in the TRUST trial across 63 centers in China (8). The rate of acute ADRs occurring within 1 hour of injection was 0.38%, 88% of which were mild and self-limited (e.g., nausea, vomiting, rash or flushing). There were two cases of a severe, immediately life-threatening ADR (0.01% incidence): one case of anaphylactic shock 3 minutes after contrast administration, and one case of bradycardia with hypotension 25 minutes after contrast administration.

In a recent issue, He and colleagues leveraged these data from the TRUST trial to formulate a predictive model for acute ADRs (9). The final risk score incorporated patient age (+1 if not 50–69 years old), dose of contrast (+1 if <100 mL iopromide 370 mg/mL used), preprocedural hydration (+2 if none) and premedication (+1 if none). Patients with a risk score of 0–2 had a predicted probability of ADR of 0.09% versus 1.78% for those with a risk score of 5. The discriminatory power of this model was fair (c-statistic: 0.694).

The TRUST trial team should be commended for producing this novel predictive model of a difficult to anticipate adverse event. Operationalizing the risk score, however, highlights some of the challenges with ADR management. First, the vast majority of ADRs recorded in this study were mild. Therefore, the degree to which the identified variables can predict the most severe hypersensitivity reactions is unclear. Furthermore, contrast-related ADRs encompass multiple pathophysiologies which can be difficult to differentiate in practice, but should be managed differently.

ADRs have been defined as “an appreciably harmful or unpleasant reaction…related to the use of a medicinal product.” (10). When mild, this often relies on the subjective report of patients. Hypersensitivity reactions comprise a subset of ADRs. There are four categories of hypersensitivity reactions: benign or severe, and acute onset (within 1 hour of exposure) or delayed onset (anywhere from 1 hour to 1 week after exposure) (11,12). Acute onset contrast-related reactions result from mast cell activation and histamine release and are physiologic (or chemotoxic) reactions to contrast media properties—namely the hyperosmolarity, ionic content, viscosity and calcium-binding properties of the agents (13). Except in particularly unstable patients, these are of lesser severity than anaphylactoid type reactions and typically manifest as injection site pain, flushing, nausea and vomiting. This can be difficult to differentiate from early or low-grade anaphylaxis symptoms, which are best characterized by urticaria, angioedema, bronchospasm, hypotension and shock (14). Current understanding is that acute hypersensitivity reactions to contrast agents are nonallergic or anaphylactoid reactions that involve direct release of histamine and other vasoactive mediators. True IgE-mediated anaphylaxis does not cause contrast-associated reactions except in a minority of patients. In one study, only 4.2% of patients with anaphylaxis symptoms after contrast administration had allergy testing that supported an IgE-mediated reaction (15). Notably, while IgE-mediated anaphylaxis requires prior sensitization to antigens, anaphylactoid reactions do not. Thus, atopic individuals with multiple severe allergies or asthma are at increased risk of anaphylactoid contrast reactions upon initial exposure, as are those with prior anaphylactoid reactions if re-exposed.

A second challenge posed by the TRUST trial data relates to pretreatment with hydration and medications. These are both covariates in the risk model and potential interventions should a patient be identified as high risk for an ADR. Premedication includes a heterogenous group of medications (corticosteroids, H1- and H2-receptor antagonists, and other medications). Corticosteroids were the primary premedication offered (18.7%) in TRUST while histamine antagonists were provided to ≤1% of patients. There is no conclusive evidence regarding the efficacy of premedication prior to intravascular administration of low-osmolality iodinated contrast. Nevertheless, many experts continue to advocate for premedication in high-risk patients, such as those with prior adverse reactions (16). On one hand, the direct risks of premedication are small, including transient leukocytosis and hyperglycemia from steroids and drowsiness from diphenhydramine. However, the indirect costs can be more significant, including increased hospital length of stay and cost (17). In addition, studies have estimated that the number of high-risk patients needed to premedicate to avoid one severe contrast reaction is 569, and to avoid 1 lethal reaction is over 50,000 (17,18). These considerations raise questions about the cost-effectiveness of routine premedication, even among high-risk patients, to avoid severe, acute-onset reactions to low-osmolar iodinated contrast.

A final point from the TRUST trial was the observed association between higher contrast volume and a decreased likelihood of ADRs, which must be interpreted with caution. The authors postulated that greater contrast exposure may increase tolerance to contrast-mediated reactions. However, minimizing contrast exposure is the most important modifiable risk factor for reducing the incidence of contrast-induced nephropathy following CC (5). Given the relative incidence and in-hospital mortality for those developing contrast-induced nephropathy as compared to contrast-induced hypersensitivity reactions, minimizing contrast use to less than 3 mL/kg remains a priority (5,19,20).

With these challenges in mind, how should providers and systems providing CC services approach the prevention and management of ADRs? First, as has become common practice in most areas, CC procedures should use non-ionic, low or iso-osmolar contrast agents given the decreased risk of physiologic ADRs as compared to hyperosmolar agents. This may be of concern in low-resource settings where hyperosmolar or ionic agents can be less expensive. Second, pretreatment remains an important consideration for patients. Given its low cost and near-universal safety (i.e., an exception for unstable patients with fulminant heart failure), intravenous hydration >500 mL prior to CC would appear to be a simple method for reducing ADRs. In the TRUST trial, no patients receiving >500 mL of pre-hydration experienced an ADR (8). The case for premedication is less robust. Acknowledging that premedication does not prevent all reactions, has not been confirmed to reduce the incidence of moderate or severe reactions, has limited supporting efficacy in high-risk patients, and is accompanied by direct and indirect harms, 2018 guidelines from the American College of Radiology’s Manual on Contrast Media note that premedication “may be considered” in certain clinical scenarios marked by prior contrast-associated reactions (Table 2) (21). 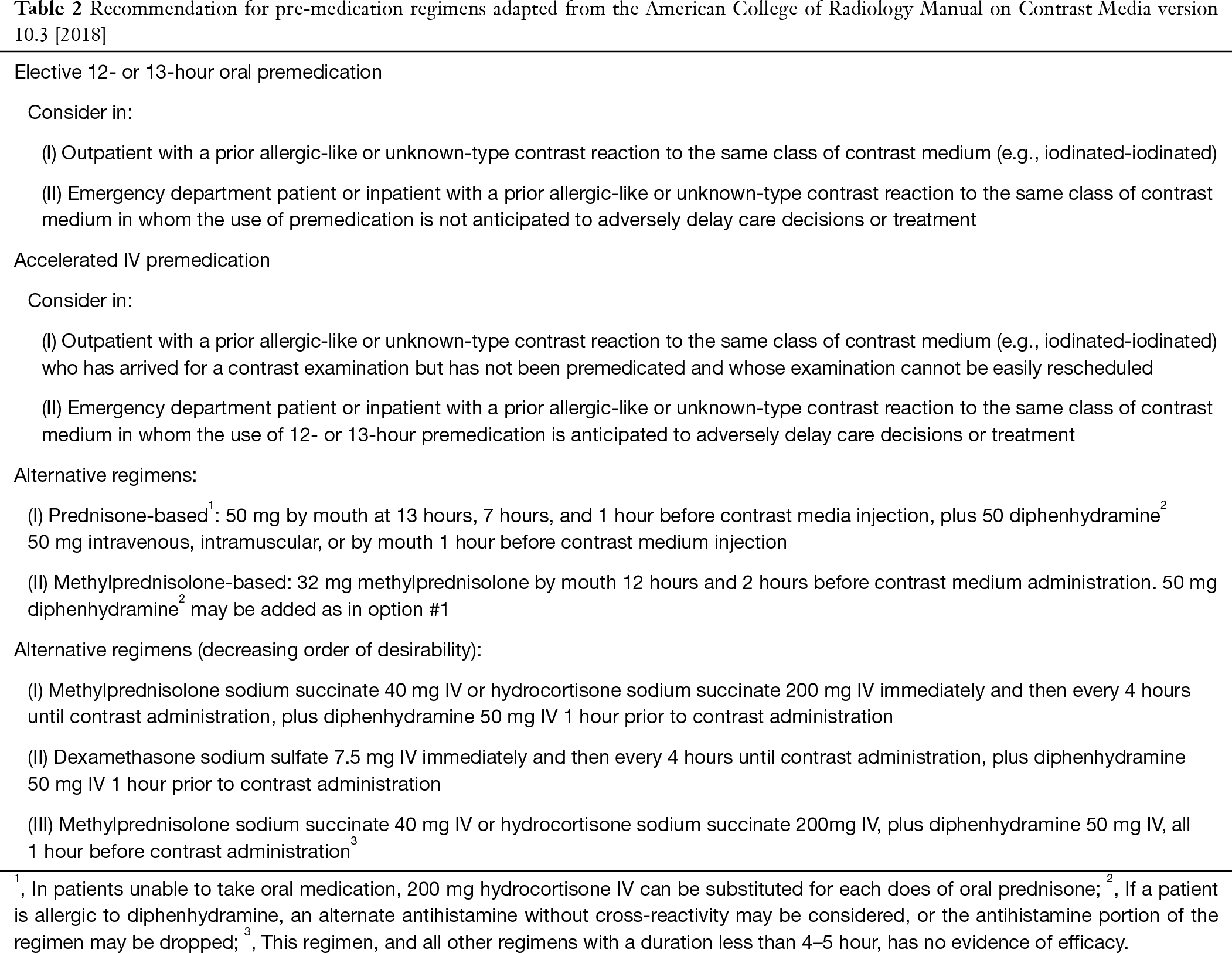 Finally, CC facilities must have the equipment, medications and training necessary to promptly diagnose and respond to the rare occurrence of a severe acute-onset hypersensitivity reaction. Providers need be alert to signs of severe reactions, especially in the case of unexplained hypotension, by examining exposed skin or removing sterile drapes to inspect for urticaria, or looking for inspiratory stridor or expiratory wheezing which may indicate bronchospasm (14). If signs of a moderate or severe anaphylactoid reaction are present, prompt treatment with epinephrine is warranted. While an intramuscular route is less likely to cause adverse effects and may be appropriate in more mild cases, this route can lead to inadequate delivery in hypotensive patients. Intravascular infusion may be most effective in the setting of anaphylactic shock (14,21,24). Additional considerations include supine or Trendelenburg positioning, aggressive resuscitation with intravenous fluids and oxygen, atropine for hypotensive bradycardia, awareness of the increased potential for adverse reaction to epinephrine in patients taking beta blockers, and need for extended post-procedure monitoring at an appropriate level of care.

In summary, ADRs to contrast media used in cardiac catheterization represent a heterogenous group of physiologic, nonallergic and allergic hypersensitivitiy reactions. These events are uncommon and difficult to predict but, when severe, can be fatal without prompt recognition and treatment. The transition from high-osmolality to low-osmolality contrast media has dramatically reduced the incidence of contrast-related ADRs, from as high as 30% to less than 1%. Detailed documentation of ADR events is needed to identify patients with prior sensitivities to contrast media. Among such patients, a change in contrast agent may lower the risk of a repeat ADR as much as, if not more than, a combined premedication regimen. Near universal pre-hydration for patients undergoing cardiac catheterization is prudent. Above all, cardiac catheterization facilities and providers must take deliberate steps to prepare for, detect, respond to and document severe ADRs when they do occur.