Esophagectomy, including complete primary tumor removal and radical lymphadenectomy with or without cervical lymphadenectomy, has been accepted as a radical esophagectomy that remains a standard treatment choice for esophageal squamous cell carcinoma (ESCC) (1,2). Studies have reported low incidences of pneumonia and mortality, similar medium-term, stage-specific survival in minimally invasive esophagectomy (MIE), compared with those reports form open esophagectomy (1,3).

For radical esophagectomy, lymphadenectomy along recurrent laryngeal nerves (RLNs) is an essential step of the operation, because of the high incidence of lymphatic metastasis in this area (4,5). However, the procedure has remained a challenge, because the meticulous dissection in a limited space frequently induces RLN palsy, followed by a higher incidence of postoperative pneumonia and laryngopharyngeal dysfunction (6,7).

We have reported the feasibility and safety of esophageal suspension method in thoracoscopic lymphadenectomy along the RLN in the semi-prone position in 2014 (8). In our institution, we routinely perform thoracoscopic and laparoscopic esophagectomies with programmed extensive lymphadenectomy along RLNs in the semi-prone position (2.5-field). Here we describe a MIE with three fields (2.5- and cervical-field) lymph node dissection using esophageal suspension method.

The multidisciplinary treatment group determined the treatment strategy. We routinely did thoracoscopic programmed extensive lymphadenectomy along the left and right RLNs. And we sent the lymph nodes along the right RLNS for intraoperative frozen pathological examination. If the results of intraoperative frozen resection were negative, patients were randomly divided into three-field lymph node dissection group and two-field lymph node dissection group. When metastasis to the right RLN chains was confirmed, bilateral cervical lymphadenectomy was also performed. And informed consent was obtained from the patient.

The patients were intubated with conventional single lumen tubes and were set in the semi-prone position.

Firstly, we free the middle and lower segment of the esophagus. Then we do the programmed extensive lymphadenectomy along RLNs.

Lymphadenectomy along left RLN was carried out subsequently, including four steps. (I) Esophageal suspension. We separated the anterior wall of the esophagus and the membranous portion of the trachea, till the left margin of the trachea. We divided the posterior wall of esophagus and the spine, and carefully exposed the upper segment of the thoracic duct to avoid injury. Number 7 surgical suture was introduced into the thoracic cavity through a trocar, suspended the esophagus at the level of carina and pulled out by a perforator with a barb at the head end at the fifth intercostal space on the inner edge of the scapula. (II) Lymph node rolling. We separated and fully exposed the left margin of the trachea and the left main bronchus. The lower part of the trachea was pushed forward and downward to expose the posterior space of trachea fully. The para-nerve lymph nodes and soft tissues were separated and rolled from the very bottom of the posterior space of trachea. We carried out the lymph node rolling from the left margin of left bronchus to the level of cervical-thoracic junction. (III) Location and identification of left RLN. After separation of soft tissue at the level of the inferior segment of the trachea, the sympathetic cardiac branch and left RLN could always be found and should be distinguished carefully. Once the RLN had been confirmed, we bluntly freed the RLN as long as possible, and several branches of the nerve should be cut off during separation. (IV) Extensive lymphadenectomy. After the three steps above, most of the para-nerve lymph nodes and soft tissues are above the RLN, an ultrasound knife and scissors were used to do the skeletonization of RLN. The en bloc resection of the para-nerve lymph nodes and soft tissues was done. The upper margin of the extent of lymphadenectomy was higher than the level of cervical-thoracic junction (Figure 1). 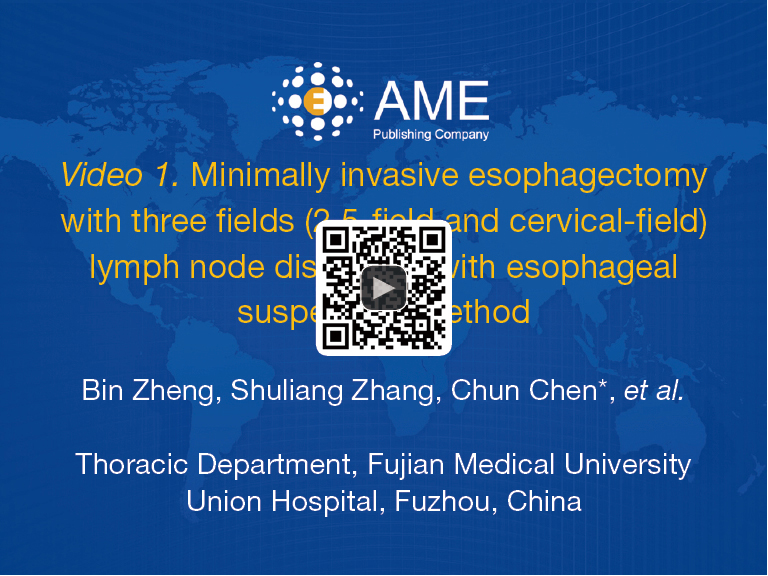 During the operation, we paid more attention to the protection of the nerves. Commonly, in the zones near the RLN, we preferred blunt separation. We believed that the electrical knife had specific side effects, and we preferred to use the harmonic scalpel and scissors.

If the result of intraoperative frozen resection was negative, and the patient was randomly divided into three-field lymph node dissection group, or when metastasis to the right RLN chains was confirmed, bilateral cervical lymphadenectomy was performed.

Based on the previous experiences, we modified lymphadenectomy procedures.

Conflicts of Interest: This video was granted the Award of Great Potential in the 2017 AME-Medtronic Minimally Invasive Esophageal Surgery Video Contest.