Idiopathic pulmonary fibrosis (IPF) is the most common form of idiopathic interstitial pneumonia (IP) associated with the histological pattern of usual interstitial pneumonia (UIP). IPF is characterized by a steady decline in pulmonary function, and median survival is approximately 3 years from diagnosis (1). Some IPF patients develop acute respiratory disease, called acute exacerbation (AE)-IPF (1-3), which can result in death within a few weeks to several months (1-3). In a sustained state of chronic inflammation, like IPF, glutathione drastically decreases and results in redox imbalance. However, reactive oxygen species (ROS) and peroxidic substances generated by cytotoxic mechanisms cannot be satisfactorily treated (4-8). ROS can damage alveolar epithelial cells and have an important role in inducing TGF-1 signaling that results in collagen-1 synthesis and fibrogenesis in pulmonary fibrosis (9-11). ROS are important in the fibrotic process in bleomycin-induced pulmonary fibrosis in humans and animals with IPF. Absence of ROS in mice lacking the p47phox subunit (Nox) 12 of NADPH oxidase protected the mice from bleomycin-induced pulmonary fibrosis (10,12). IPF is thought to cause fibrosis through alveolar epithelial injury and repetition of inappropriate repair, and apoptosis is reported to be involved in this condition (8,13).

Bcl-2-like 11 (BIM) is a pro-apoptotic member of the B cell CLL/lymphoma 2 protein family and is an important modulator of apoptosis (14,15). BIM expression is important in the activation of ROS overproduction via forkhead box O3 (FOXO3) (16). Recently, Ng et al. (17) reported a common intron deletion polymorphism in the gene encoding BIM. This polymorphism switched BIM splicing from exon 4 to exon 3, which resulted in expression of a BIM isoform lacking the pro-apoptotic B cell CLL/lymphoma 2 homology domain 3 (BH3). BIM deletion polymorphism has a silent single-nucleotide polymorphism (SNP) in exon 5 (c465C>T) and a deletion site (2,903 bp). Because IPF patients with this BIM deletion polymorphism do not have the BH3 domain that is critical in apoptosis, alveolar epithelial apoptosis and ROS production might be less robust in these patients than in IPF patients without this polymorphism.

We investigated the clinical features of IPF patients with and without the BIM deletion polymorphism and examined the importance of redox status.

We reviewed the medical records of 63 patients with IPF to determine their BIM deletion polymorphism status, which was determined by polymerase chain reaction (PCR) analysis of a peripheral blood specimen (serum 5 mL). The patients were treated in our department during the period from January 2006 through April 2018. Patient background characteristics, IP markers, respiratory function test results, and frequency of AE-IPF were compared in patients with and without BIM deletion polymorphism, as were total blood glutathione (tGSH), oxidized glutathione (GSSG), reduced glutathione (GSH), 8-hydroxy-2'-deoxyguanosine (8-OHdG), and 8-isoprostane (8-iso). Patient samples were stored at −80 °C until laboratory analysis.

This retrospective study was approved by the Institutional Review Board of Toho University Medical Center Omori Hospital (25-5).

These patients were defined as having UIP patterns or non-UIP patterns on computed tomography (CT), and the diagnosis was confirmed by histological examination of lung biopsy specimens or the presence of findings consistent with the clinical diagnostic criteria for IPF (18). According to the official ATS/ERS/JRS/ALAT Clinical Practice Guideline, IPF is diagnosed when known causes of fibrosis (e.g., connective tissue disease or asbestos) are excluded and high-resolution CT shows a probable or definite UIP pattern. We re-evaluated IPF diagnoses in all patients at the time this study was performed, to ensure that initial diagnoses were correct.

In accordance with the guidelines of the International Working Group Report (1), AE-IPF was diagnosed by using the following criteria: (I) worsening breathlessness within 30 days; (II) a diagnosis of IPF; (III) presence of new ground-glass opacities or consolidation on imaging; (IV) absence of hyperpigmentation shadows on CT. Patients with obvious pneumothorax, pulmonary embolism, or heart failure were excluded. Fatal AE-IPF was defined as AE-IPF resulting in death within 1 month after AE-IPF (19).

A blood sample was collected in a 9 mL tube containing the anticoagulant EDTA. Urine samples were centrifuged at 3,000 rpm for 10 min and stored frozen at −80 °C until analysis. tGSH (i.e., GSH plus GSSG) and GSSG were analyzed with a Bioxytech GSH/GSSG-412 assay kit (Oxis Health Products, Portland, OR, USA). This method uses 5.5'-dithiobis-2-nitrobenzoic acid (DTNB), which reacts with GSH to form a spectrophotometrically detectable product at 412 nm. GSSG is recycled to GSH by glutathione reductase, which requires nicotinamide adenine dinucleotide phosphate (NADPH). This assay kit uses the thiol removal reagent 1-methyl-2-vinylpyridinium trifluoromethanesulfonate (M2VP) at a concentration that rapidly removes GSH but does not interfere with the glutathione reductase assay. The ratio was calculated by using competitive ELISA (New 8-OHdG Check; Nihon Shizuoka Aging Laboratories, Japan) as follows: (GSH ‒ 2 × GSSG)/GSSG (20). The specificity of the monoclonal antibody N45.1 used in the competition ELISA (New 8-OHdG Check; Nihon Shizuoka Aging Laboratories) was previously reported (21). Urinary 8-OHdG is expressed as the ratio of 8-OHdG to creatinine in urine (21).

Spirometry measurement and carbon monoxide diffusing capacity (DLco) were measured with a pulmonary function test system (Chestac-33, Chest Co. Ltd., Toyo, Japan). Diffusion capacity was measured by the single brace method. % forced vital capacity (FVC) was calculated with the Baldwin formula (22), and %DLco was calculated with the Burrows formula (23). All pulmonary function tests were conducted by two technicians using the methods and standards detailed by the American Thoracic Society (24).

Overall survival (OS), defined as the period from the date of IPF diagnosis until death from any cause, was compared in patients with and without BIM deletion polymorphism. FVC was measured in all patients at baseline and at 1 and 2 years after treatment. In analyses of mean change in forced vital capacity from baseline (ΔFVC), the principle of last observation carried forward was used to address the issue of missing values. We assigned the worst possible outcome to a missing value attributable to patient death (e.g., FVC =0). In addition, missing values due to disease progression outcomes other than death were assigned half the previous value (25).

SPSS software for Windows, version 12.0 (SPSS Inc., Tokyo, Japan), was used for the statistical analyses. The clinical characteristics of patients with and without BIM deletion polymorphism were compared with Fisher's exact test. Survival curves were plotted by using the Kaplan–Meier method, and statistical analysis was performed with the log-rank test.

BIM deletion polymorphism was present in 8 of the 63 (12.7%) IPF patients analyzed. Clinical characteristics, frequency of IPF treatment [such as N-acetylcysteine (NAC), prednisolone, prednisolone, and cyclosporine (CsA)], levels of serum markers, and pulmonary function test results at baseline did not significantly differ between patients with (n=8) and without (n=55) BIM deletion polymorphism (Table 1). To diagnose IPF, surgical lung biopsy (SLB) was performed in 6 cases (9.5%). 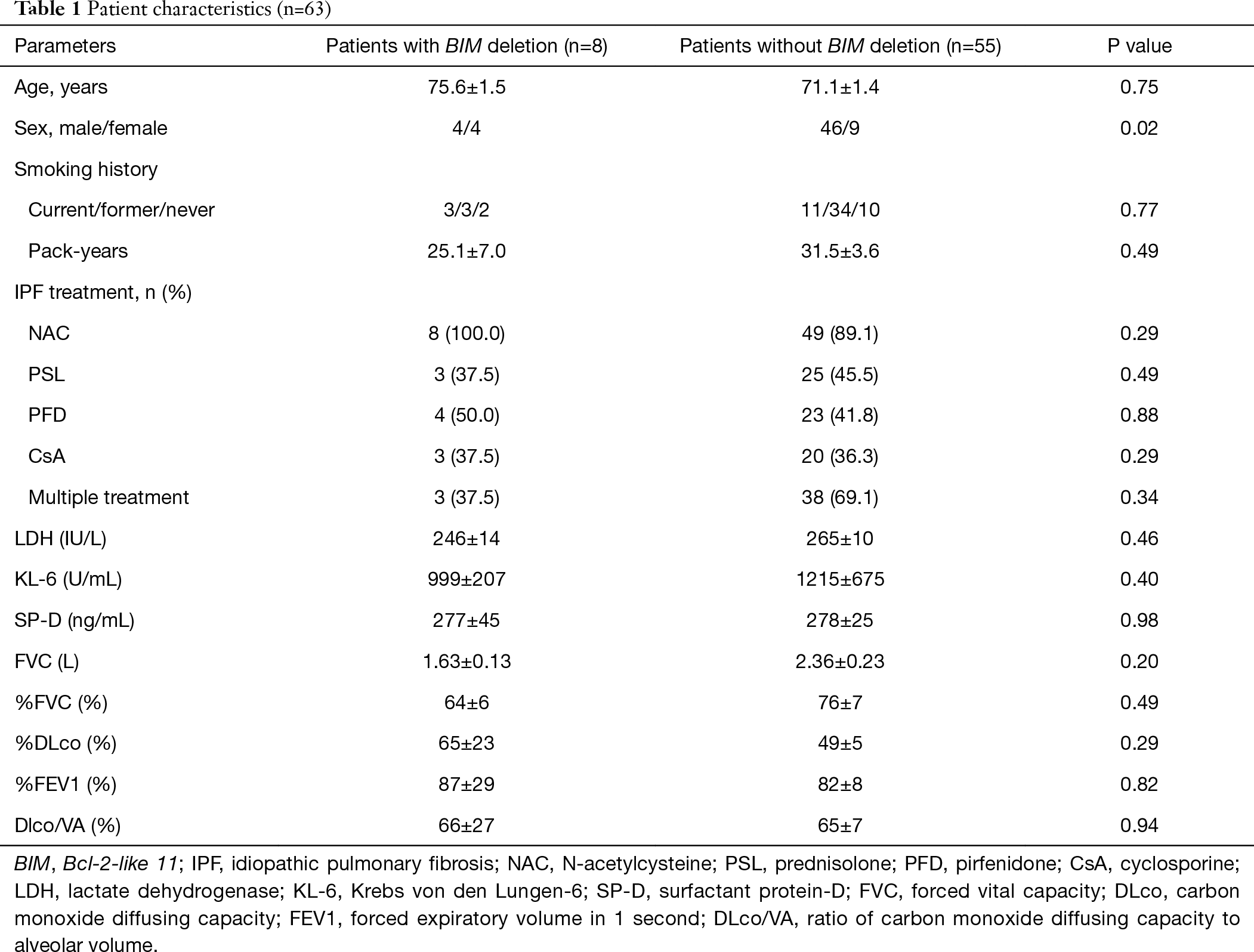 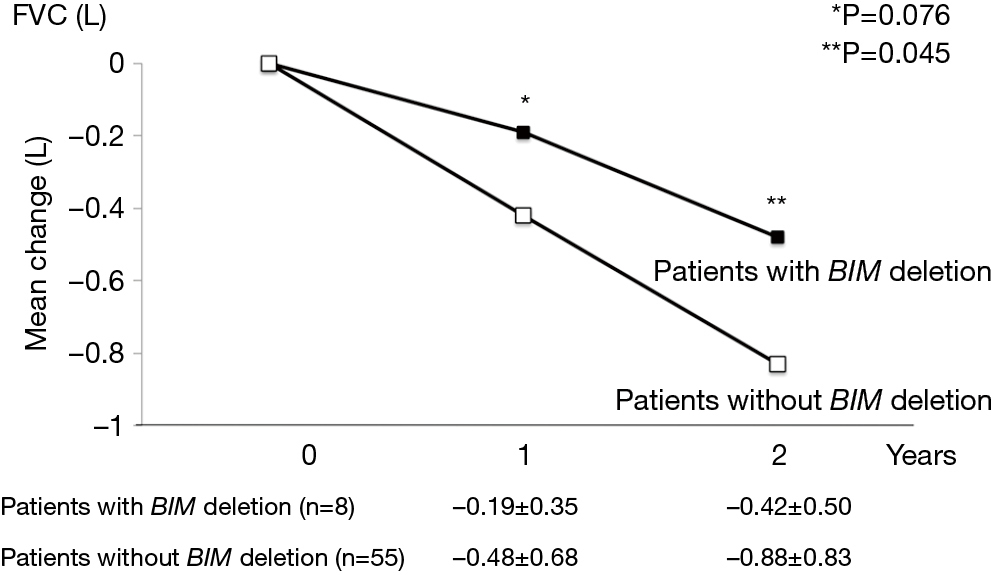 Median OS after diagnosis was longer in patients with BIM deletion polymorphism than in those without the polymorphism (not reached vs. 1,620 days, respectively; P=0.18), but the difference was not significant.

BIM deletion polymorphism was observed in 12.7% of Japanese patients with IPF and 20% (6 of 30) of healthy Japanese volunteers; the difference was not statistically significant. The present IPF patients with and without BIM deletion polymorphism did not significantly differ in relation to serologic markers [including lactate dehydrogenase (LDH), Krebs von den Lungen-6 (KL-6), and surfactant protein-D (SP-D)] or pulmonary function test results [including FVC, %FVC, %DLco, % forced expiratory volume in 1 s (FEV1), and ratio of DLco to alveolar volume (DLco/VA)] at baseline. These results suggest that clinical and laboratory test results are insufficient for identifying patients with BIM polymorphism.

Interestingly, serologic markers and pulmonary function test results did not differ in relation to BIM deletion polymorphism status; however, baseline redox status, including tGSH and 8-iso, significantly differed between patients with and without this polymorphism. Patients with IPF were reported to have diminished GSH levels in epithelial lining fluid and bronchoalveolar lavage (BAL) fluid and BAL cells (4-7). 8-iso is a nonenzymatic eicosanoid synthesized by random oxidation of tissue phospholipids by active oxygen and was reported to be an excellent indicator of oxidative damage in a rat model of oxidative stress (29). In this study, tGSH at baseline was significantly higher in patients with BIM deletion polymorphism than in those without the polymorphism. A higher GSH/GSSG ratio is associated with a reduction in FVC decline, which could lower the risk of AE-IPF.

The concentration of glutathione, a low molecular weight antioxidant found in normal lung tissue, is diminished in epithelial lining fluid and fibrotic foci of IPF lungs (4,11). The antifibrotic action of the GSH precursor NAC causes NAC to increase lung GSH levels and attenuate bleomycin-induced fibrosis (30,31). Administration of inhaled NAC to IPF patients enhances antioxidant/oxidant balance (32). The PANTHER trial showed that orally administered NAC monotherapy was not effective (33), and the efficacy of NAC inhalation is thus still debated. Future studies should attempt to evaluate the different methods of NAC delivery. In this study, all six IPF patients with BIM deletion polymorphism were treated with inhaled NAC treatment. These patients had decreases in AE and FVC reduction rate, but the benefit of inhaled NAC therapy is unclear for the subset of IPF patients with BIM deletion polymorphism.

IPF is believed to include ROS, particularly lung damage induced by superoxide anion (4-12). Superoxide dismutase (SOD) catalyzes the conversion of superoxide anion to hydrogen peroxide (11,34), and findings from animal studies suggest that lecithinized SOD (PC-SOD) is effective for IPF treatment (35). Clinical trials of PC-SOD for IPF patients are ongoing. Continuing research on therapeutic approaches to inhibit the ROS-mediated response in the development and progression of pulmonary fibrosis show promise for the treatment of IPF.

In the PANTHER trial, Oldham et al. (36) reported SNPs in TOLLIP and MUC5B. NAC therapy was associated with a significant reduction in the risk for the combined endpoint (hazard ratio 0.14; 95% CI, 0.02–0.83; P=0.03) in patients with the TT genotype. The authors concluded that NAC therapy was effective for IPF patients with the TT genotype. Genetic background should be determined in order to predict the clinical effects of NAC treatment, and future clinical trials should use Genetic background as a stratification factor.

A limitation of this study is that it was a retrospective single-center study of a small Japanese population. Second, no patient received nintedanib, and AE-IPF treatment was not standardized. Inhaled NAC improved redox imbalance in a previous study of 22 IPF patients (37). A large-scale multicenter study with a validation cohort is necessary in order to confirm the present results. Third, we reported a difference in FVC progression in the presence or absence of BIM gene polymorphism but could not comprehensively evaluate the effect of IPF treatment.

The effectiveness of NAC treatment should be evaluated in patients stratified by BIM deletion polymorphism status. We assigned the worst possible outcome to a missing value attributable to patient death; values missing because of disease progression outcomes other than death were assigned half the previous value. Whether this is a substitute for lung function needs to be examined in a future study.

In conclusion, the present results suggest that clinical outcomes are better for IPF patients with BIM deletion polymorphism than for those without the polymorphism, perhaps because of differences in redox status.

Funding: This study was partially supported by a grant from the Ministry of Health, Labour and Welfare of Japan, awarded to the Study Group on Diffuse Pulmonary Disorders, Scientific Research/Research on Intractable Disease, by JSPS KAKENHI Grant Numbers JP15K09195 and JP2642140, and by a Research Promotion Grant from Toho University Graduate School of Medicine (No. 16-3, to K.I.).

Ethical Statement: The authors are accountable for all aspects of the work in ensuring that questions related to the accuracy or integrity of any part of the work are appropriately investigated and resolved. This retrospective study was approved by the Institutional Review Board of Toho University Medical Center Omori Hospital (25-5).