Chronic cough, which is defined as a cough lasting for more than 4 weeks in children (1), is one of the most frequent symptoms for which children seek medical care in the clinical setting (2). A lot of children with chronic cough have not been diagnosed and treated appropriately. Chronic cough usually leads to substantial stress and heavy economic burdens. Quality of life of children and families of children are seriously impaired (3).

This prospective single-center cohort study was conducted in Children’s Hospital of Soochow University from March 2012 to December 2013. Children’s Hospital of Soochow University is a tertiary hospital that provides service for most children in the Suzhou area. Children aged 6–14 years who were sequentially referred to our hospital for evaluation of chronic cough (>4 weeks) were eligible for the study (10). The exclusion criteria were previous known chronic respiratory illnesses such as bronchopulmonary dysplasia, immotile cilia syndrome, tuberculosis, asthma, and bronchiectasis. Patients with serious cardiac or systemic diseases were also excluded.

This study was conducted in accordance with the amended Declaration of Helsinki. The Ethical Committee of Suzhou University approved the protocol (SZU2012-C133), and written informed consent was obtained from the parents of all patients.

A systematic, step-by-step diagnostic algorithm was used, with uniform diagnostic criteria (Table 1) according to the American College of Chest Physicians (ACCP) pediatric guidelines (10). At enrollment, all patients underwent a detailed physical examination which included complete ear, nose, throat (examination of the ear with reflected light from a headlight, inspection of the external nose, and visualization of the larynx), respiratory, and cardiovascular examinations looking particularly for clubbing, chest deformity, cardiac abnormality, or auscultatory abnormality. Data regarding demographic and clinical characteristics, medical history, and family history were obtained using a standardized data collection form. Corticosteroids, bronchodilators, leukotriene receptor antagonists, and histamine antagonists were inhibited 2 weeks prior to the beginning of the study. Clinical tests including pulmonary function test, the bronchial provocation test, skin prick tests, esophageal pH monitoring and induced sputum test were performed. Other tests such as routine blood tests, serum Mycoplasma pneumoniae-specific antibody measurement, and posteroanterior chest X-rays were also performed. The cough symptom score was routinely documented as described in the established guidelines (11). Briefly, daytime scores were as follows: 5 = cannot perform most usual activities due to severe coughing; 4 = frequent coughing which interferes with school or other activities; 3 = frequent coughing but does not interfere with school or other activities; 2 = cough for more than two short periods; 1 = cough for one or two short periods only and 0 = no cough. Nighttime scores were as follows: 5 = distressing cough; 4 = frequent coughs most of the night; 3 = frequent waking due to coughing; 2 = awoken once or awoken early due to coughing; 1 = cough on waking or on going to sleep only and 0 = no cough at night. Cough resolution (considered to be a cough-free status) was defined as ≥75% improvement or total resolution of cough for ≥3 consecutive days according to the parental reports and cough diary data (7).

Pulmonary function tests were performed by spirometry (MasterScreen IOS; Jäger, Höchberg, Germany) and interpreted by a pediatric pulmonologist. Lung volume was measured according to standard criteria (12). The parameters measured were the forced expiratory flow volume in 1 second (FEV1), forced vital capacity (FVC) and forced expiratory flow (FEF) 25–75%. The patients performed three times of forced expiratory maneuvers from the total lung capacity to the residual volume, and the best of the three measurements was used in the final analysis.

A bronchial provocation test was performed when the baseline post-salbutamol FEV1 was >70% predicted. In each test, a nose clip was worn and an aerosol was inhaled through the mouth by tidal breathing for 2 min. Phosphate-buffered saline was inhaled first, followed at 2-min intervals by 2-fold increasing concentrations of histamine acid phosphate from 0.01 to 1.28 mg. The response was measured by FEV1 at the start of the test and at 2 min after each inhalation. The inhalations were continued until the FEV1 decreased by 20% or the highest cumulative dose of 2.4 mg was reached. The results were expressed as the concentration required to etiology a 20% fall in the FEV1 (PD20-FEV1).

When the baseline post-salbutamol FEV1 was >70% predicted, a 3% hypertonic saline solution was inhaled via an ultrasonic nebulizer for 10 min as previously described (13). Inhalations were discontinued when sputum was obtained or when the FEV1 decreased by >20%. The collected sputum was treated with dithioerythritol, vortexed for 15 s, and incubated for 15 min in a 37 °C water bath. The suspension was then filtered through a 48-lm nylon filter and centrifuged at 3,000 ×g for 10 min. Cytospin slides were prepared and stained with eosin-hematoxylin, and a differential cell count was obtained from 400 non-squamous cells. Samples with cell viability of >70% and squamous cell contamination of <20% were considered as qualified samples (14).

Thirteen kinds (6 groups) of common aeroallergens was tested, including mites (Dermatophagoides pteronyssinus, D. farinae, and Blomia tropicalis), cockroaches (Periplaneta americana and Blattella germanica), pollens (Artemisia vulgaris, Ambrosia artemisiifolia, mixed grasses, and mixed trees), cats (Felis domesticus), dogs (Canis familiaris), and molds (mold mixes I and IV). Allergens and negative control solutions were supplied by ALK (Hørsholm, Denmark). Atopy was defined as the presence of at least one positive skin reaction to any allergen tested by skin prick tests. We considered an allergen-specific skin test response to be positive if the difference between the wheal size of the allergen-specific test and the negative control was at least 3 mm.

The 24-hour esophageal pH values were recorded on Digitrapper MK III pH recorder (Swedish CTD-SYECTICS Ltd., Stockholm, Sweden) with bipolar antimony electrodes. The results are transferred to the computer for processing, and described as the DeMeester score and symptom association probability (15).

Plain posteroanterior chest radiographs were obtained in all the patients at the time of the first visit to hospital. The films were reviewed by a physician and a radiologist.

SPSS 17.0 version (IBM Corp., Armonk, NY, USA) was used for the statistical analysis. The numerical parameters are described as mean ± standard deviation or number with percentage as appropriate. Parametric and nonparametric comparative tests for continuous data and the chi-square test for categorical data were used to compare variables between groups. Sensitivity, specificity, and positive and negative predictive values for the presence of symptoms and signs and for each accessory examination were calculated. A two-tailed P value of <0.05 was considered statistically significant. 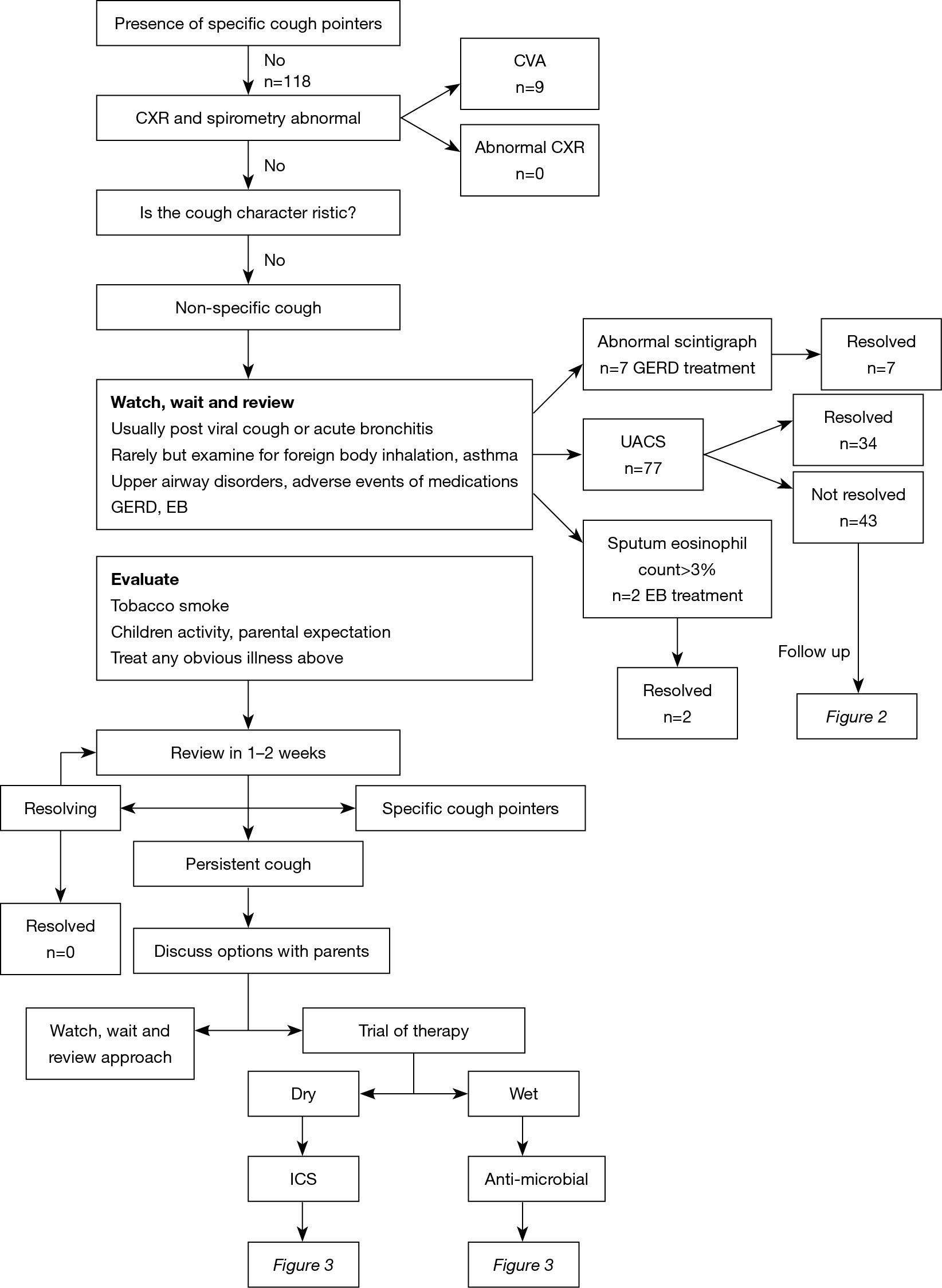 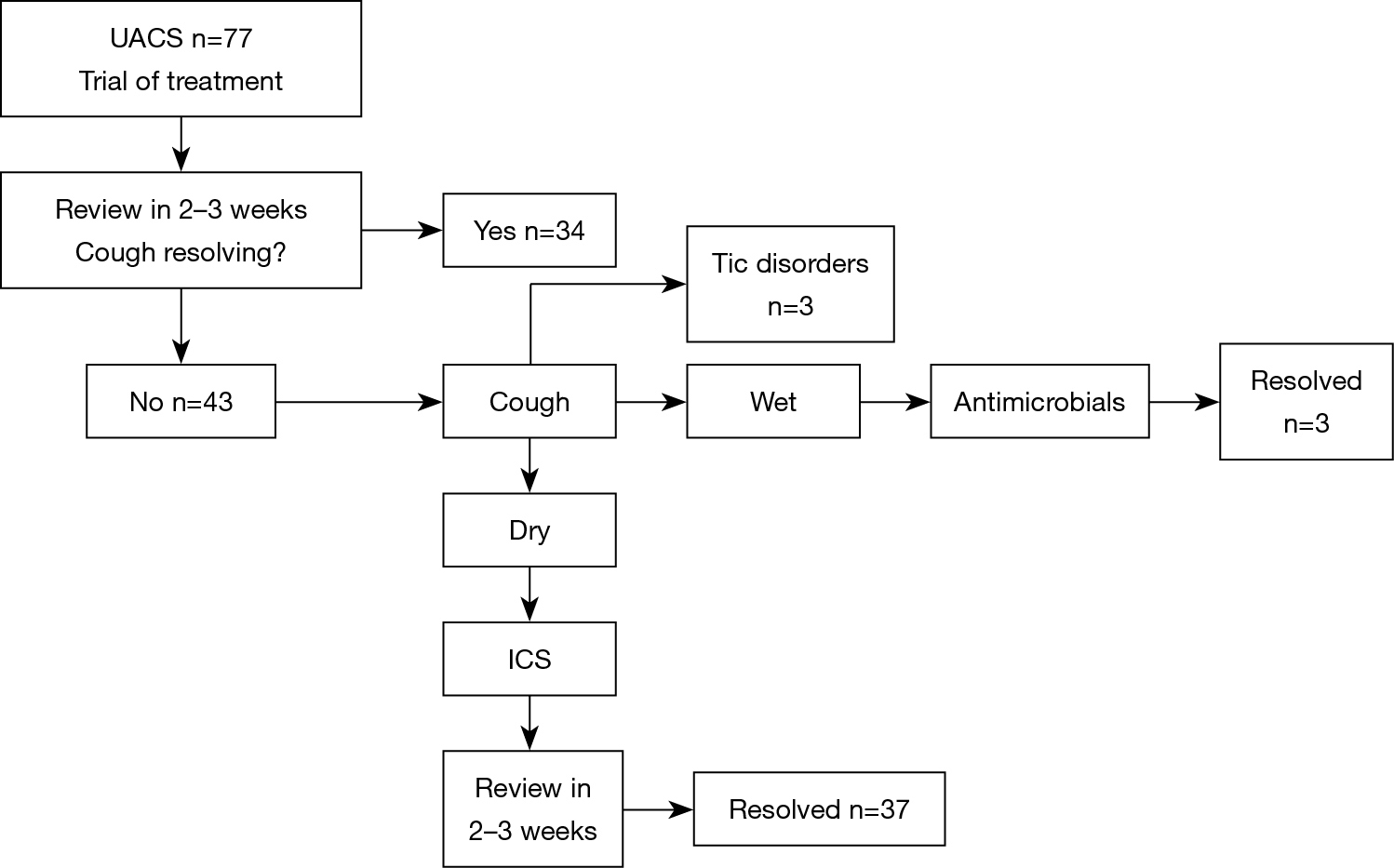 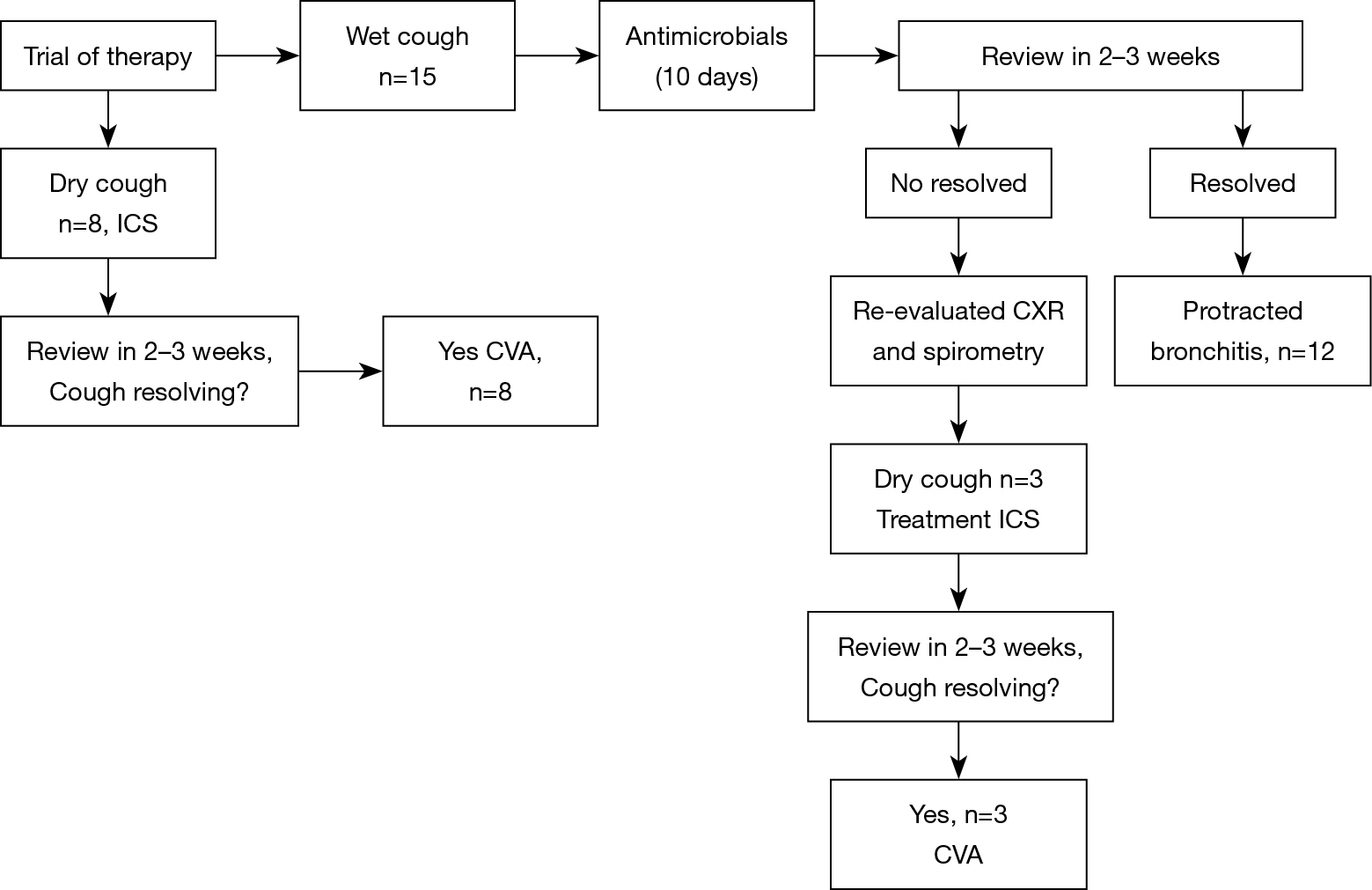 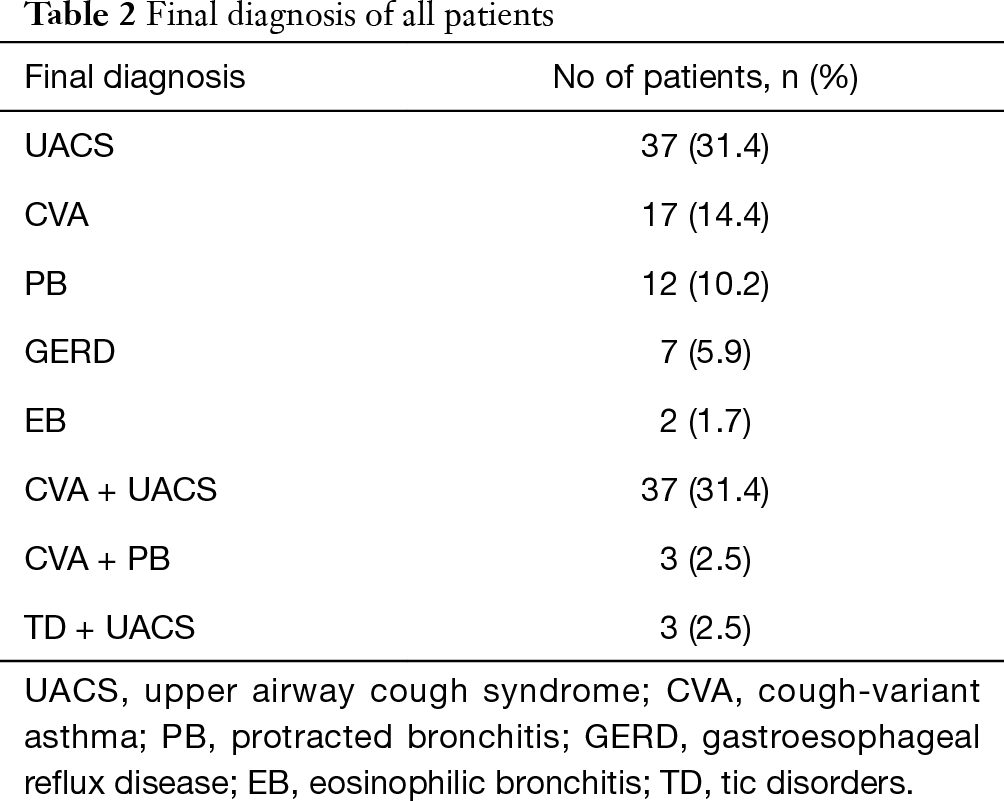 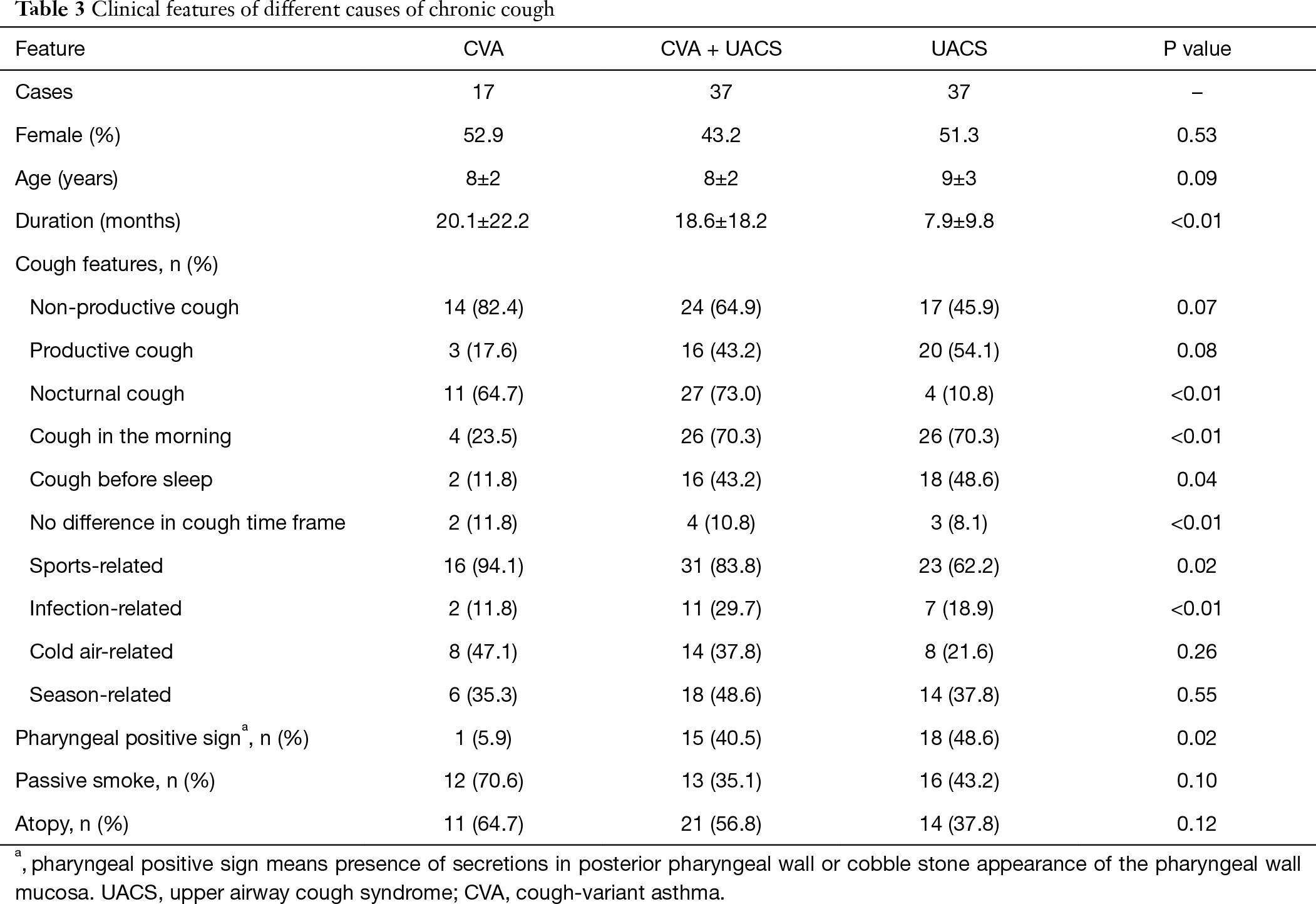 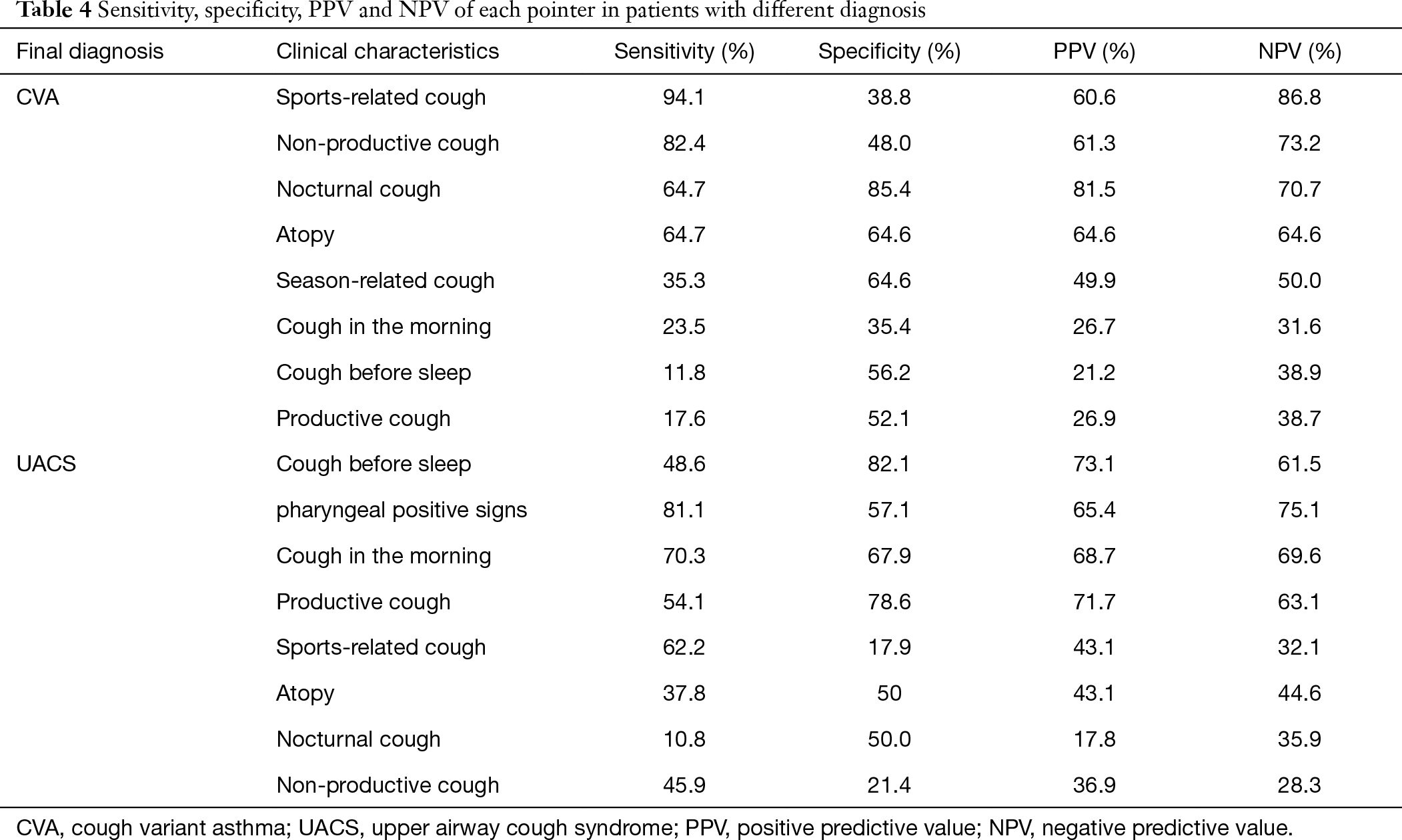 Table 4 Sensitivity, specificity, PPV and NPV of each pointer in patients with different diagnosis
Full table 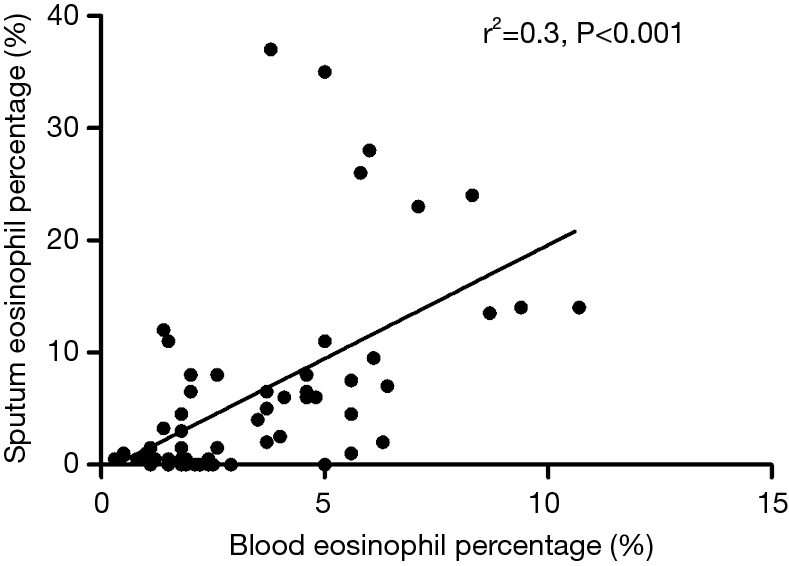 Figure 4 The correlation between serum and sputum eosinophils in patients with chronic cough.

To our knowledge, this prospective study is the first to comprehensively evaluate the etiology of chronic cough and the value of clinical feature in school age children in China.

In 2012, a multicenter study on chronic cough in China revealed that CVA was the most common etiology (41.95%) followed by UACS (24.71%) and postinfectious cough (21.73%), which is in line with our study (16). When compared with other studies in Western countries, the proportions of etiologies were quite different. Asilsoy et al. also investigated 108 school-age (6–14 years) children with chronic cough and reported that asthma, asthma-like symptoms, and protracted bacterial bronchitis were responsible for almost half of all cases (6–14 years) of chronic cough (8). These results were quite similar to those obtained by Gedik et al. (9). Protracted bacterial bronchitis was considered the most common etiology of chronic cough (>3 weeks), affecting 41% of all patients in a multicenter study by Chang et al. (17). We attribute this difference to different study populations and diagnostic criteria. Moreover, various environmental factors in different countries may also contribute to the differences in study findings.

The strength of our study is that 24-hour esophageal pH and induced sputum test were performed in most of the patients (71.2% and 78.8%, respectively) with chronic cough. GERD was found in 5.9% of patients in our study. Whereas only 0.7% of patients with GERD was found in the previous Chinese study, in whose study 24-hour esophageal pH was only performed in the suspicious GERD cases (16). In Asilsoy’s study, GERD was also reported to affect 4.6% of the school-age patients with chronic cough (8). In Marchant et al.’s study, GERD was found in 14.8% of the patients, which is higher than our study. However, they did not further compare the GERD percentage between different age group (7). GERD is considered to be an uncommon etiology in children with chronic cough but listed in the top 3 etiologies in adult patients in Europe and America (18,19). However, in China, GERD was only found in 4.6% of the adult patients in a recent multicenter study (20). The disparity of GERD incidence between children and adults is not seen in China.

In adults, EB was one of the common etiologies of chronic cough (20). While, our results showed that EB was an uncommon etiology of chronic cough in children. Although previous study had found the low incidence of EB in China and other countries (7,16), they only performed induced sputum tests in suspected patients and some cases with EB may be omitted or might be diagnosed as asthma because of a good response to corticosteroid. Thus, our results can truly reflect the low incidence of EB in children with chronic cough.

The highlight of the present study was the analysis of the patients’ clinical characteristics and prediction of chronic cough based on these characteristics. CVA is characterized by non-productive cough and nighttime cough. We found that nighttime cough was an important indicator of CVA with a specificity of 85.4%. Conversely, the sensitivity of cough after sports and atopy were higher in patients with CVA, indicating their contribution to the diagnosis of CVA when a misdiagnosis might exist because of the low specificity. We showed 54.1% of patients with UACS had a productive cough. As previously reported, patients with UACS characterized by a non-productive cough potentially have high airway responsiveness (21). The high rate of positive pharyngeal signs in patients with UACS emphasizes the importance of the physical examination. Because of the limited numbers of patients with EB, TD, and GERD, we did not analyze their clinical characteristics for prediction of the etiologies of chronic cough.

The present study has some limitations. Although children of different ages have different etiologies of chronic cough (9), we only included school-age children in the present study. Second, our study was based on a single center. We anticipate the performance of multicenter studies to ensure precision, reduce selection bias, and increase generalizability. Third, the international experts of the ERS recommend the assessment of cough via subjective and objective measures, while this study only considers subjective methods for the assessment of cough and cough quality. Fourth, the concept of cough hypersensitivity syndrome, defined as a clinical syndrome characterized by troublesome coughing often triggered by low levels of thermal, mechanical, or chemical exposure, has progressed as the mechanistic basis of chronic cough and is accepted by physicians to encompass idiopathic or unexplained cough in adults (22). However, in children, especially those with unexplained cough, the role of cough hypersensitivity syndrome in chronic cough is still not fully understand and had not been evaluated in our study.

The common etiologies of chronic cough in school-age children were UACS, CVA, and PB, while EB and GERD were rare.

We thank Angela Morben, DVM, ELS, from Liwen Bianji, Edanz Editing China (www.liwenbianji.cn/ac), for editing the English text of a draft of this manuscript.

Funding: This study was funded by Provincial Key Research and Development Program of Jiangsu (No. BE2016676, Chunagli Hao), Key Projects for Social Development of Jiangsu Province (No. BE2017657, Yuqing Wang) and the Science and Technology Program of Suzhou (SYS201641, Wujun Jiang and SS201765, Li Huang).

Ethical Statement: The study protocol was approved by the Ethics Committee of Suzhou University (SZU2012-C133; Suzhou, China). Written informed consent was obtained from all parents and children recruited into the study. The authors are accountable for all aspects of the work in ensuring that questions related to the accuracy or integrity of any part of the work are appropriately investigated and resolved.