Inspired by the mesorectum and based on previous research (3,4), our team believes that a new treatment concept should be established for the surgical treatment method of esophageal cancer. We explored the anatomy of the mesoesophagus during the radical resection of esophageal carcinoma by thoracoscopy and laparoscopy, and excised the involving esophagus and mesoesophagus as a complete anatomical unit (5), which is defined as TME. The operation includes three courses (Figure 1). 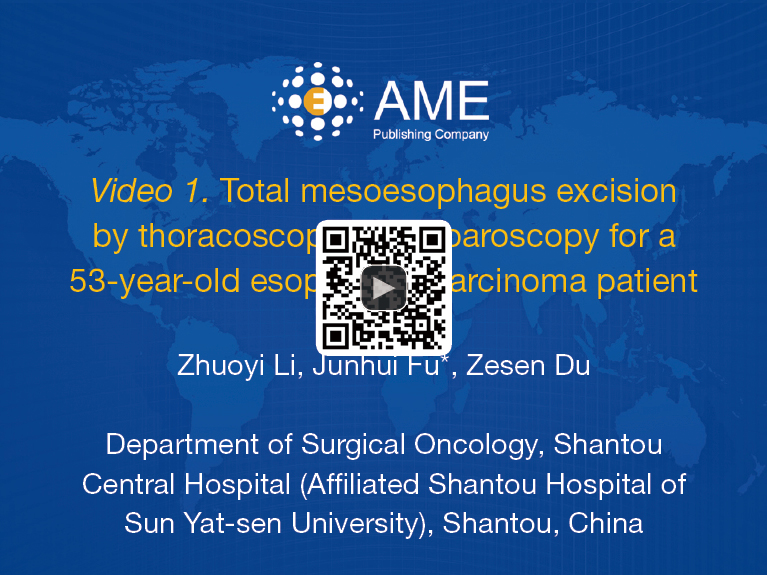 The excision of the thoracic segment mesoesophagus by thoracoscopy

The patient was anesthetized with single lumen endotracheal intubationina left prone position; the thoracic positive pressure ventilation was adjusted to 4–6 mmHg. The tissue was scavenged by electric coagulation hook and ultrasonic dissector with the trachea and pericardium as the anterior border, and the prevertebral fascia as the posterior border. We excised the mediastinal pleura and arch of the azygos vein, explored the left vagus nerve near the left anterior of the trachea and aortic pulmonic window, found the reflection part of the left recurrent laryngeal nerve, scavenged the fat and lymphatic tissue surrounding the nerve, and reached upward into the innominate artery level. After exploring the right vagus nerve trunk on the right anterior of trachea, we found the reflection part of the right vagus nerve in the deep side of apical pleura, scavenged the fat and lymphatic tissue surrounding the nerve, and then reached to the right middle thyroid artery level. Following the posterior compartment of the esophagus, the interspace of the trachea and esophagus, and the posterior compartment of the pericardium, we separated the thoracic segment esophagus up to the entrance of the thoracis connecting to the retropharyngeal space, down to the diaphragmatic muscle connecting to the retroperitoneal space, and excised the lymph nodes of the thoracic segment mesoesophagus (2, 4, 7, 8, 9, 15 group) as far as possible. To avoid thermal injury, the thoracic recurrent laryngeal nerve was exposed by blunt separation. Meanwhile, the complete dissociation in the whole course could effectively avoid injury. The incidence rate of recurrent laryngeal nerve injury in our department is about 3.2%. Oral administration of olive oil 8 hours before surgery can fill the thoracic duct so as to avoid injury. Only 1 case of chylothorax occurred in our department, with full recovery after conservative treatment.

The excision of the ventral segment mesoesophagus by laparoscopy

After thoracoscopic operation, the patient was changed to prostration and straddle position to be operated on by laparoscopy. The stomach was separated up to the esophageal hiatus, and down to the distal end of the pylorus. The dorsal mesenteria of the first half of the stomach were excised by an ultrasonic dissector in the posterior pancreatic space. The trunk and branch of the celiac artery were bared. The gastric lymph nodes (16, 17, 18, 19, 20 group) were dissected thoroughly. A 3-cm subxiphoid incision was made. After the partial excision of the crura of the diaphragm and the expansion of the esophageal hiatus, the stomach was pulled out from esophageal hiatus. A tubular stomach was made after the excision of the lesser curvature and lymph nodes.

Compared to the traditional open approach, TME by thoracoscopy and laparoscopy has shown the advantages of the minimally invasive approach: shorter operation time, less intra-operative blood loss, rare occurrence of serious complications, and a comparable effect of lymph node removal. The anatomical structure of the mediastina is complicated and requires the precise procedural control of the operation team. To achieve accurate local en-bloc resection (7), more skills are required in the separation of the thoracic segment of the mesoesophagus, which needs to be separated from the tracheal mesenteria in the upper middle section, the membranous part of the trachea and pericardium in the anterior aspect, and the prevertebral fascia in the posterior aspect. Total mesorectal excision for rectal cancer and TME by thoracoscopy and laparoscopy for esophageal cancer reduce micrometastasis and thus reduce the probability of local recurrence of tumor.

Conflicts of Interest: This video was granted the Award of Great Potential in the 2017 AME-Medtronic Minimally Invasive Esophageal Surgery Video Contest.