The safety and feasibility of thoracoscopic uncommon pulmonary segmentectomy

Although the standard surgical procedure for primary lung cancer is anatomic lobectomy, the number of patients undergoing anatomic pulmonary segmentectomy is increasing as several previous studies have demonstrated non-inferior oncological and perioperative results in both intentional and unintentional segmentectomies (1,2).

This study was approved by Japanese Red Cross Maebashi Hospital Institutional Review Board (No. 2019-16).

All patients in our department, except for those with an allergy to the contrast agent, underwent preoperative three-dimensional computed tomography (3D-CT) angiography and bronchography to image bronchovascular structures and determine the relative locations of the tumors and pulmonary vessels.

In our department, senior surgeons (M Kamiyoshihara and H Igai) usually performed pulmonary segmentectomy due to the technical difficulties although several cases of lobectomies were performed by mid-career surgeons.

The thoracoscopic pulmonary segmentectomy was performed under general anesthesia using one-lung ventilation with the patient in the lateral decubitus position. We placed a monitor above the head of the patient to image all procedures. A 10- or 5-mm flexible type thoracoscope was utilized in all patients. Our thoracoscopic anatomic pulmonary resection involves three or four ports. A 3–5 cm access incision was made in the fourth or fifth intercostal space on the anterior axillary line. The thoracoscopic port was placed in the sixth or seventh intercostal space on the posterior axillary line. An additional port for surgical instruments was placed in the sixth intercostal space on the anterior axillary line. If necessary, we also placed an additional port on the sixth or seventh intercostal space just beside the scapula angle. The access incision and additional ports for surgical instruments were covered with an XXS-sized wound retractor (Alexis Wound Retractor; Applied Medical, Rancho Santa Margarita, CA, USA). Large vessels or bronchi were divided with a stapler. Small-caliber vessels were divided with an energy device or scissors after ligation. The specimen was placed in an endovascular bag and retrieved through the access incision after the pulmonary segmentectomy was completed. The access incision was lengthened if necessitated by the size of the specimen. A rib-spreader was not used in any case. The interlobar and hilar lymph node were sampled in patients with primary lung cancer undergoing segmentectomy to confirm pathological stage. In intentional segmentectomies, we planned to perform additional lobectomy if the resected lymph node was positive. In unintentional segmentectomies, we did not plan to perform additional lobectomy because these patients were not able to be tolerate for additional lobectomy. No lymphadenectomy was performed in patients with metastatic lung cancer or benign disease. 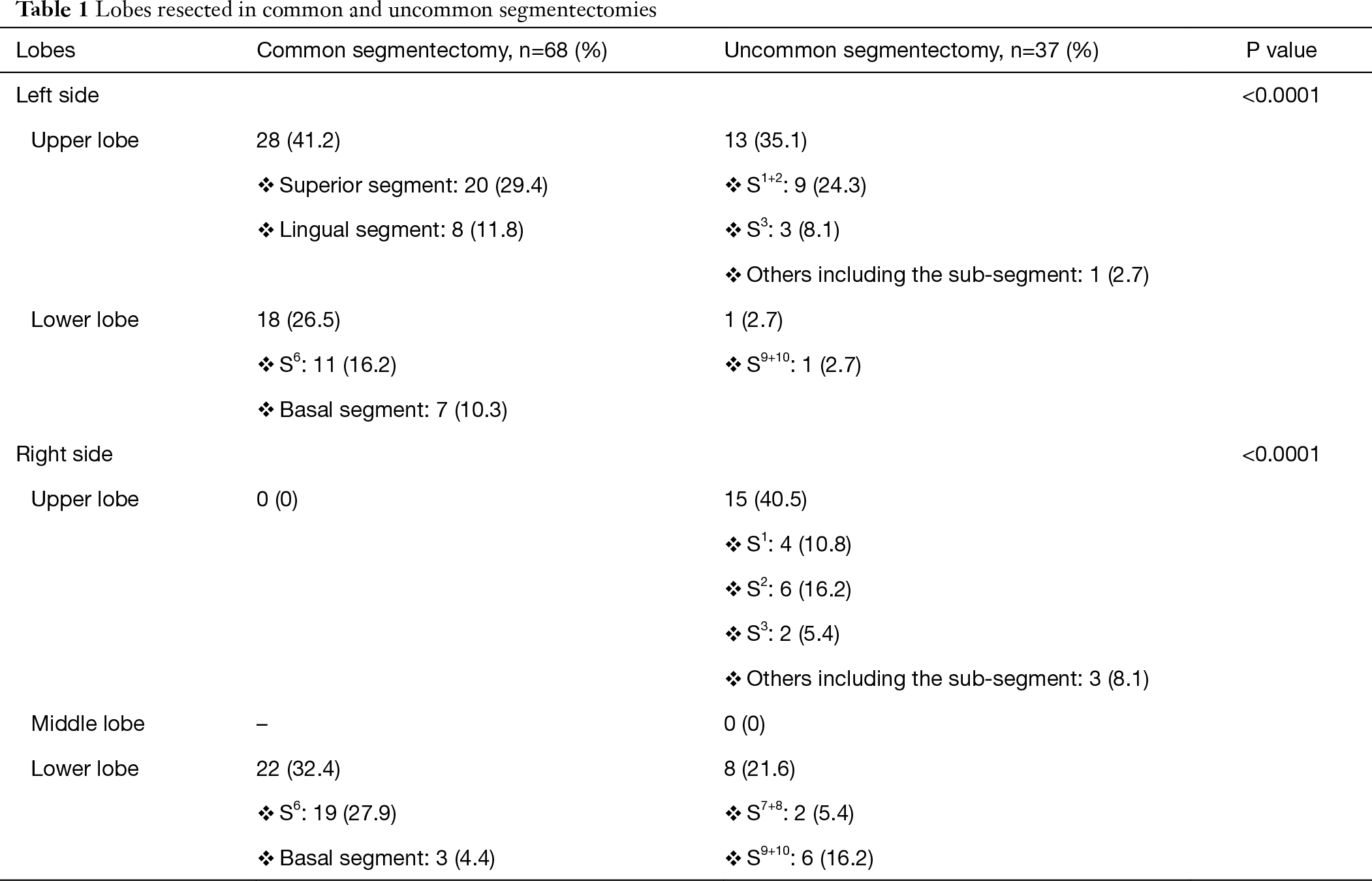 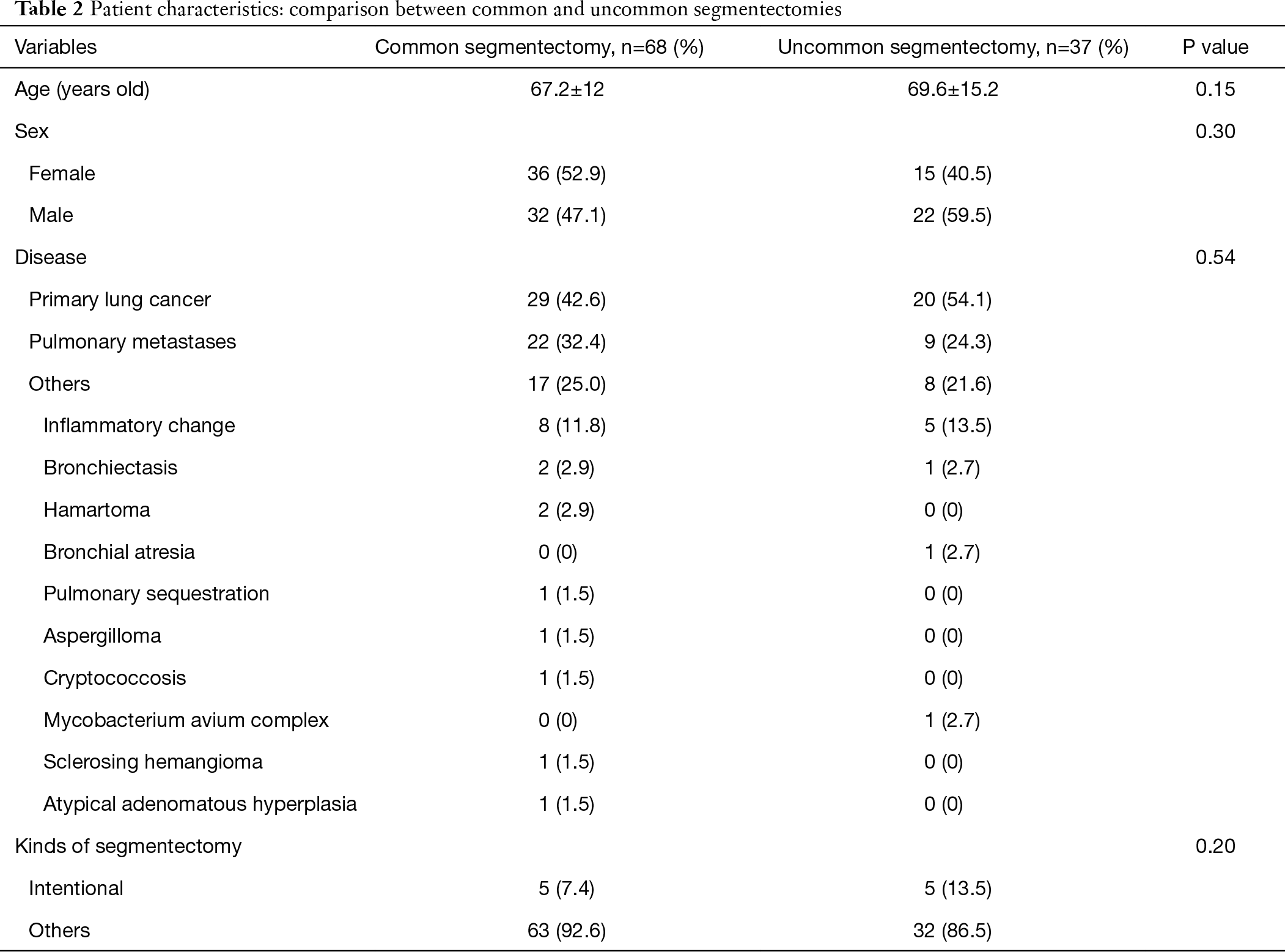 It is also important to determine the relative locations of the tumor and pulmonary vessels to ensure an appropriate intersegmental plane and oncological safety margin. Many previous studies describing common and uncommon pulmonary segmentectomies discussed the importance of preoperative 3D-CT angiography and bronchography for recognizing these locations (13,14). Therefore, all patients (except one with an allergy to the contrast agent) in our department underwent preoperative 3D-CT angiography and bronchography. We were able to examine the surgical margin between the intersegmental plane and the tumor by palpation using a thoracotomy approach. However, we are unable to palpate the tumor during the thoracoscopic approach. Therefore, thoracic surgeons must ensure an adequate oncological safety margin without palpating the tumor during thoracoscopic pulmonary segmentectomy. Preoperative recognition of the relative location of the tumor and pulmonary vessels can help ensure an adequate oncological safety margin when using the thoracoscopic approach. Moreover, the inflation-deflation and selective jet ventilation techniques occasionally fail to identify the intersegmental plane accurately, especially in an emphysematous lung, because of collateral ventilation. Misaki et al. reported using infrared thoracoscopy to identify the intersegmental line without inflating the lung, by injecting indocyanine green (15). Although this dye-based method is useful for patients with an emphysematous lung, infrared thoracoscopy is required and the intersegmental lines can only be observed for a few minutes because the dye disappears due to pulmonary circulation. Therefore, in cases of an emphysematous lung, we divide the intersegmental plane along the branches of the pulmonary vessels in the direction from the hilum to the periphery. Exposing the pulmonary vessel toward the periphery as much as possible aids smooth and safe stapler insertion.

The authors appreciate all of the surgeons and coworkers who contributed to this study, and we thank the editors and reviewers for their assistance with the manuscript.

Conflicts of Interest: Meeting presentation: The abstract has been presented at the 27th European Conference on General Thoracic Surgery of the European Society of Thoracic Surgeons, Dublin, Ireland, 9-12 June 2019.

Ethical Statement: The authors are accountable for all aspects of the work in ensuring that questions related to the accuracy or integrity of any part of the work are appropriately investigated and resolved. This study was approved by Japanese Red Cross Maebashi Hospital Institutional Review Board (No. 2019-16); all patients provided written informed consent prior to their inclusion in the study.