Protein kinase activation induced by somatic mutation or chromosomal alteration is one of the mechanisms of tumorigenesis and has led to targeted therapies with specific inhibitor drugs (1). For patients with non-small cell lung carcinoma (NSCLC) harboring driver gene mutations and rearrangements, the use of small-molecule tyrosine kinase inhibitors (TKIs) has been a standard therapy (2,3). Oncogenic c-ros oncogene 1 (ROS1) is one of the rearrangements found in NSCLC. The ROS1 gene-fuses to several partner genes, and the activated ROS1 fusion kinases drive cellular transformation (4-6). ROS1 fusion is generally known to be present in approximately 1–3% of NSCLC cases, and an effective TKI is available (7-9).

For ROS1 rearranged NSCLC (ROS1-NSCLC), crizotinib, a small-molecule TKI, has been used. Crizotinib was initially approved for ALK-rearranged NSCLC. In 2012, the possibility that crizotinib might be exquisitely effective against ROS1-NSCLC in vitro was reported (7). In addition, several reports showed its efficacy in patients with ROS1-NSCLC. Thereafter, two prospective cohort studies were conducted: PROFILE 1001 and OO12-01. PROFILE 1001 was a phase 1 expansion study evaluating the efficacy and safety of crizotinib in 50 patients with ROS1-NSCLC (10). The objective response rate (ORR) was 72.0% [95% confidence interval (CI), 58.0 to 84.0], and the median progression-free survival (PFS) was 19.2 months (95% CI, 14.4 to not reached). OO12-01 was a large phase 2 study that enrolled 127 patients with ROS1-NSCLC. It demonstrated a clinically meaningful benefit and durable responses with crizotinib in East-Asian patients (11). The ORR was 71.7% (95% CI, 63.0 to 79.3), and the median PFS was 15.9 months (95% CI, 12.9 to 24.0). Based on these two studies, crizotinib was approved for the treatment of ROS1-NSCLC in Japan in May 2017. However, because of the small number of patients with ROS1-NSCLC, the efficacy and safety of crizotinib in clinical practice has been poorly documented in Japan.

In this report, we retrospectively reviewed the clinical characteristics of patients with ROS1-NSCLC and sought to assess the efficacy and safety of crizotinib in Japanese patients in actual clinical practice.

Between December 2014 and May 2018, patients with a definite diagnosis of advanced/relapsed ROS1-NSCLC were selected from consecutive NSCLC cases treated at the National Cancer Center Hospital. The diagnosis of ROS1-NSCLC was primarily based upon reverse transcription polymerase chain reaction (RT-PCR), fluorescence in situ hybridization (FISH), or next generation sequencing (NGS). We reviewed the patients’ medical records and collected the following information: patient characteristics, histology, treatment history, and methods of ROS1 detection. Especially, we assessed the efficacy of the most commonly used previous treatment regimens.

We extracted patients with ROS1-NSCLC who had been treated with crizotinib in actual clinical practice. We excluded patients in whom the efficacy of the treatment could not be evaluated or who had participated in clinical trials for ROS1-NSCLC. For the efficacy analysis, we included patients who had at least one measurable lesion and had undergone a computed tomography evaluation 6 to 8 weeks after the start of crizotinib therapy. We evaluated the efficacy of the treatment based on the Response Evaluation Criteria in Solid Tumors (RECIST version 1.1). PFS was defined as the time from the beginning of treatment until disease progression or death, and overall survival (OS) was measured from the initiation of treatment until the date of death. PFS was censored as of the last date on which the patient was known to be progression-free, and OS was censored as of the date of the last follow-up. If a patient changed to another treatment because of toxicity, we handled them as censored cases as of the beginning of the next treatment. In the safety analysis, we assessed all the patients with ROS1-NSCLC who were treated with crizotinib in clinical practice. Adverse events were graded according to the National Cancer Institute Common Terminology Criteria for Adverse Events, ver. 4.03. The survival rates were estimated using the Kaplan-Meier method. All the statistical analyses were performed using JMP version 14.0 (SAS Institute, Cary, NC, USA).

During the study period, 24 patients (1.9%) were diagnosed as having ROS1-NSCLC. The baseline characteristics of the patients are shown in Table 1. The ROS1 rearrangement status was assessed using RT-PCR (n=17), FISH (n=8), or NGS (n=5). Among the 24 patients who were diagnosed as having ROS1-NSCLC, the 13 patients who were treated with crizotinib in actual clinical practice (female, n=8; male, n=5) had a median age of 56 years (range, 36–78 years). Twelve patients had adenocarcinoma, and 8 were never-smokers. The median number of prior chemotherapy treatments before crizotinib was 2 (range, 0–7). Two and three patients received crizotinib as first and second line, respectively. Among the 11 patients who did not receive crizotinib in clinical practice, 5 received crizotinib as part of investigator sponsored trials for ROS1-NSCLC. We identified the following fusion partners of ROS1: CD74 molecule gene (CD74; n=3), syndecan 4 gene (SDC4; n=1), and solute carrier family 34 member 2 (SLC34A2; n=1). 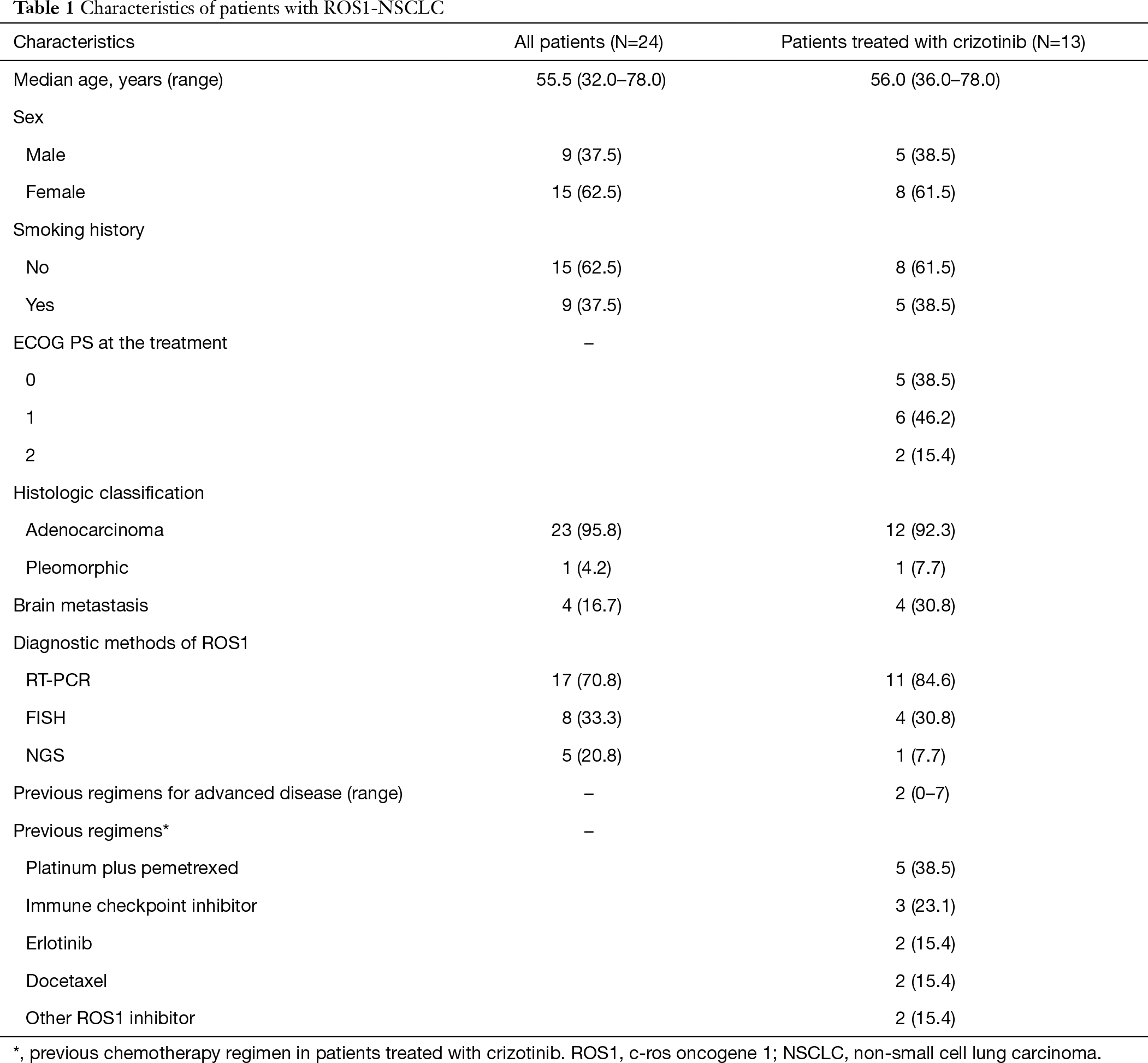 Patients received the standard crizotinib dose of 250 mg twice a day until one of the following events occurred; disease progression, clinical deterioration, or unacceptable toxicity. When AEs were related to crizotinib, the dose of crizotinib was modified depending on the grade of the adverse events. Among 13 patients, three patients were excluded because they were not fully performed imaging evaluations. In the 10 evaluable patients, the median follow-up time was 35.5 months (95% CI, 8.9 to 44.6 months), the median PFS was 10.0 months (95% CI, 5.1 to 27.0 months), and the OS was 28.7 months (95% CI, 6.7 to not reached) (Figure 1). A waterfall plot of the patients in whom the response could be evaluated is shown in Figure 2. The best overall responses were a partial response (PR) in 8 patients and stable disease (SD) in 2 patients. The ORR was 80.0% (95% CI, 49.0 to 94.3). In terms of the efficacy of the previous treatments that had been performed in 18 patients, 11 patients received pemetrexed/platinum and 7 patients received ICIs. The ORRs for treatment with pemetrexed/platinum and immune checkpoint inhibitors (ICIs) were 45.5% (95% CI, 21.3 to 72.0) and 14.3% (95% CI, 2.6 to 51.3), respectively. A swimmer’s plot of the duration of the previous chemotherapies in the 13 patients who received crizotinib in clinical practice is shown in Figure 3.

Figure 1 Progression-free survival (A) and overall survival (B) in patients with ROS1-NSCLC who were treated with crizotinib (N=10). ROS1, c-ros oncogene 1; NSCLC, non-small cell lung carcinoma. 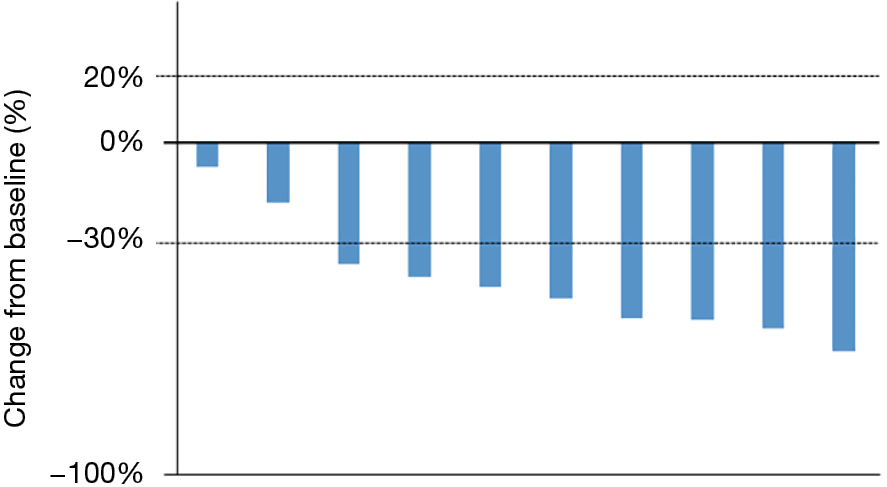 Figure 2 Best response to crizotinib, based on the maximal percentage of tumor reduction (N=10).

Table 2 shows the details of the adverse events in the 13 patients who received at least one dose of crizotinib in clinical practice. The most frequent adverse events were aspartate aminotransferase (AST) increased and alanine aminotransferase (ALT) increased (69.2%). Overall, the number of grade 3 adverse events was 8: electrocardiogram QT corrected (QTc) interval prolonged (n=2), anemia, AST increased, weight loss, pleural effusion, pneumonitis and thromboembolic event (all n=1). Regarding the patient with grade 3 pneumonitis, the physician suspected interstitial lung disease (ILD) related to crizotinib treatment and discontinued the treatment. In contrast, the other patients with grade 3 adverse events continued crizotinib treatment after a treatment interruption or dose reduction. No grade 4 or 5 adverse events related to crizotinib were reported. 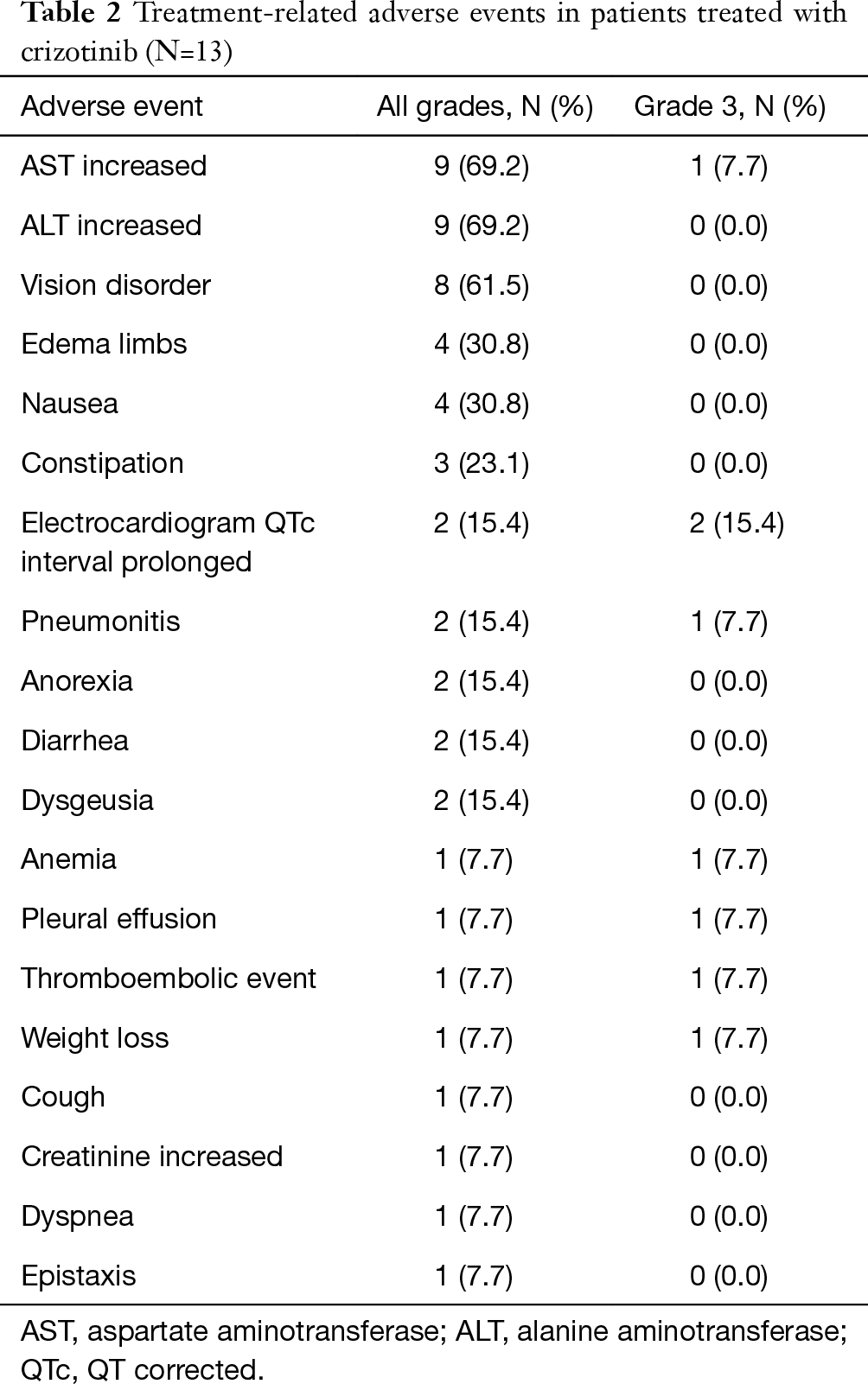 Similar to previous clinical trials, we were able to continue to treat patients with ROS1-NSCLC using crizotinib safely. A QTc interval prolonged which 2 patients experienced, was the most common grade 3 adverse event (15.4%) in our study. We previously reported that patients with an ATP-binding cassette sub-family B member 1 (ABCB1) genotype and a lower body weight were more likely to develop severe adverse events among Japanese NSCLC patients harboring ALK fusion gene treated with crizotinib (20). We were aware of the potential cardiotoxicity of crizotinib and were able to avoid fatal adverse events through frequent electrocardiogram examinations. After stopping crizotinib treatment and confirming recovery, we were able to continue treatment after a dose reduction of crizotinib before the AE became lethal. We suggest that physicians should be cautious of QTc interval prolonged results in patients receiving crizotinib.

Recently, several studies discussing the mechanism of resistance to crizotinib in ROS1-NSCLC have been published. Most patients with ROS1-NSCLC invariably acquire resistance to crizotinib despite its initial efficacy. Gainor et al. reported that they identified 16 patients who underwent a total of 17 repeat biopsies following progression while receiving crizotinib, and they identified ROS1 resistance mutations in 53% of the specimens (21). In their study, ROS1 mutations included G2032R (41%), D2033N (6%), and S1986F (6%). Other ROS1 resistance mutations have been described in some studies (22-25). Moreover, activations of KIT, KRAS and EGFR have been identified as mechanisms of resistance to crizotinib in ROS1-NSCLC (26-28). These studies are expected to lead to a large step forward in the development of new drugs for the treatment of ROS1-NSCLC with acquired crizotinib resistance. Recently, the efficacy of a new generation of ROS1 inhibitors, including lorlatinib and entrectinib, has been shown in early clinical trials for ROS1-NSCLC (29-31).This study had some limitations. First, the study was performed retrospectively at a single center in Japan. In this regard, it is impossible to compare our results with other global results completely. Second, the numbers and types of previous regimens differed among the patients with ROS1-NSCLC. These previous regimens might have influenced the results for the efficacy and toxicity of crizotinib.

Our results demonstrated that the administration of crizotinib to patients with ROS1-NSCLC was effective and safe in clinical practice in Japan.

Ethical Statement: The authors are accountable for all aspects of the work in ensuring that questions related to the accuracy or integrity of any part of the work are appropriately investigated and resolved. The study was approved by the Institutional Review Board of the National Cancer Center Hospital (No. 2015-355). Due to the retrospective nature of this study, informed consent was not obtained from each patient.