We read with interest the editorial from Zheng et al., and in the article, the authors stated that the incidence of lung cancer has increased in young non-smoking women in China (1). This phenomenon is interesting and has important clinical significance. To verify this increase, we conducted a retrospective review of 8,668 patients who underwent resection for lung cancer from January 1, 1990 to December 31, 2017.

All patients had undergone surgery, and their clinicopathological information (age, sex, pathology and smoking status) was available. All patients provided informed consent. The Shandong Provincial Hospitals’ Ethical Review committee approved the study (No. 2019-201). Patients were classiﬁed as never-smokers or smokers based on their answering a “yes or no” question, and smokers included both former and current smokers. We placed patients in groups for every four successive years and used unpaired t-tests to analyze the changes using SPSS software 24.0. For all analyses, P<0.05 was considered statistically significant.

The proportion of never-smokers increased 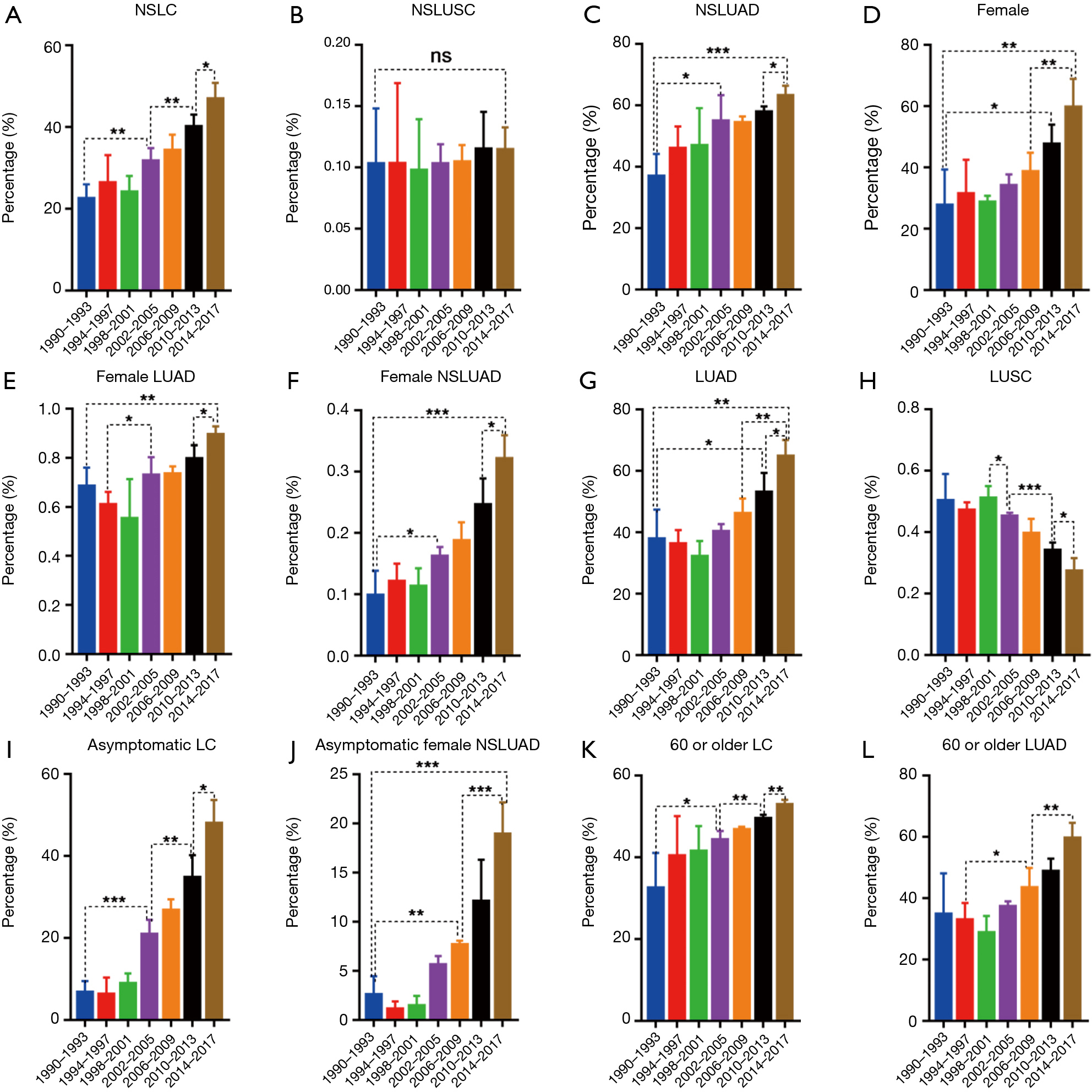 The proportions of adenocarcinoma and squamous cell carcinoma were reversed

The proportion of women without symptoms when diagnosed with lung cancer significantly increased over time (Figure 1I) as did the proportion of asymptomatic non-smoking female adenocarcinoma patients (Figure 1J).

The proportion of elderly patients with lung cancer increased

Global statistics estimate that 25% of all lung cancer cases worldwide are not attributable to smoking, indicating that if lung cancer in never-smokers was considered a separate category, it would rank as the seventh most common cause of cancer death worldwide (2). This percentage is much higher in Asian lung cancer patients (3).

Why has the proportion of female patients increased over these 28 years? Is this proportional change due to an actual increased incidence in never-smokers or due to a relative reduction in smoking-related lung cancer in the overall population? As reported, the incidence of lung cancer increased in women, but not in men in China, which may have contributed to the proportional changes (4). According to an almanac of China’s population, the ratio of men to women has not changed significantly in China. In the cohort who underwent resection for lung cancer, the proportion of women increased significantly, especially in those with LUAD, and most female patients had never smoked. Are any carcinogenic factors more harmful to women? A recent report suggested that environmental and behavioral factors, such as smoking and secondhand smoke, are important risk factors for cancer (5). New carcinogenic factors may have played a key role in these changes, such as second-hand smoke, smog and other environmental pollution, but this remains difficult to verify.

The increasing number of asymptomatic patients at the time of diagnosis suggests that people are placing increased importance on physical examinations. We also deduced that the appearance of low-dose computerized tomographic (LDCT) screens is a factor. More early-stage lung cancer patients are being diagnosed because of these screens. Chen considered these screens to be small ground glass opacity (GGO). However, the data remain difficult to explain.

Although our research had many shortcomings, including that it lacked the critical person-time denominator, it still provided much information. We must pay more attention to the changes in lung cancer proportions. Further studies should focus on lung cancer incidence in both ever-smoker and never-smoker cohorts. Lung cancer in never-smokers may be considered a separate category (2). The prognosis and treatment of this patient subset requires further investigation.

Funding: This work was supported by the National Science Foundation of China (81672288).