Esophagus cancer is an extremely aggressive malignant tumor with a high clinical incidence. It ranks ninth in terms of incidence and sixth for mortality worldwide (1-3). It affects more than 400,000 people worldwide every year and the incidence rates are rapidly increasing, especially in China (4). Pickled vegetables, tobacco and alcohol are the most common carcinogenic environmental factors that have contributed to the increased incidence of esophageal cancers (5). The morbidity of patients with esophageal cancer in China accounts for over 40% of patients worldwide. It has become a severe threat to people's health and a heavy financial burden to society in general (6). The therapeutic strategy for patients with early-stage esophageal cancer is surgery as the first choice. It can play a role in improving the patient’s prognosis. However, the 5-year survival rate for patients with esophageal cancer is only around 20% (7). Most patients are at the advanced stage of the disease when they are diagnosed. Different therapeutic interventions are available, such as chemo- and radiation therapy. However, these treatment strategies are often inadequate or associated with severe side effects. The alternate treatment options that have gained prominence are phytochemicals, i.e., natural compounds that have fewer side effects, higher specificity and cost-effectiveness.

Medicinal herbs have been used to treat a variety of diseases and have a long history of demonstrated therapeutic benefit. In recent years, there has been a worldwide trend in research of natural compounds present in herbs, vegetables and fruits for their anti-oxidant and anti-cancer properties (8-12). It has been reported that natural compounds have a unique advantage for the treatment of esophageal cancer. They have been shown to enhance immunity, inhibit the growth of cancer cells and reduce cancer relapses and metastases (13,14). Furthermore, natural compounds have been shown to improve the therapeutic efficacy of chemo- and radiotherapy, and reduce their side effects (15). Luteolin, a natural plant flavonoid, obtained from Chrysanthemum morifolium, have been shown to exert an anti-proliferative effect on esophageal cancer cells and induce apoptosis though the mitochondrial pathway (16,17). Berberine has been shown to have potent anti-cancer effects on a variety of cancer cell lines. Berberine has been shown to inhibit the migration and metastasis of esophageal cancer cells (18) and exert anti-proliferative effects by interfering with the mTOR pathway (19). The natural compound, curcumin, has been demonstrated to enhance cancer cell chemosensitivity (20,21), increase cleaved caspase-3 activity, and activate the notch signaling pathway (22).

Magnolol (5,5'-diallyl-2,2'-dihydroxybiphenyl), extracted from a well-known traditional Chinese medicine, Magnolia officinalis, possesses a variety of pharmacological properties, especially anti-cancer properties. Magnolol inhibits the proliferation of human lung squamous carcinoma CH27 cells at low concentrations and induces apoptosis at high concentrations (23). Magnolol inhibits the proliferation, migration, and invasion of hepatocellular carcinoma HepG2 cells in vitro in a dose-dependent manner. In addition, magnolol has been shown to reduce HCC tumor volume and weight in mouse xenograft tumor models (24), and significantly inhibit angiogenesis in vitro and in vivo evidenced by the attenuation of hypoxia and vascular endothelial growth factor (VEGF)-induced tube formation in human bladder cancer cells (25). These findings have led us to investigate the mechanism by which magnolol exerts its anti-cancer activity in esophageal cancer cells.

Cell viability treated with different Magnolol concentrations were measured using the CCK-8 kit. Cells were cultured in 96-well plates (1×104/well), and then treated with different concentrations (0, 20, 50, 100 and 150 µM) of magnolol when the cells reached 70–80% confluence. After 24 h or 48 h of incubation, the media was removed and 100 µL CCK-8 buffer was added per well and incubated for an additional 4 h. Absorbance of each well was measured at 450 nm.

Apoptosis was measured using flow cytometry. FITC-Annexin V/PI detection kit was used to quantify the percentage of cells in different stages of apoptosis. KYSE-150 cells were seeded into 6-well plates, and then treated with PBS (control) or magnolol (20 and 100 µM) for 48 h. Then, 1×105 cells were re-suspended in 100 µL 1× binding buffer. After addition of FITC-Annexin V and PI, the cell suspension was incubated for 15 min in the dark. Subsequently, 400 µL 1×binding buffer was added to the cells for flow cytometry analysis.

Cells were treated with DMSO or 20 µM magnolol for 24 h, and then 1×105 cells were loaded onto a migration chamber. Media containing 10% FBS was placed in the lower chamber. After 12 hours, the cells that had migrated through the membrane were stained using crystal violet. The number of cells that migrated were quantitated using a fluorescence microscope.

Cells were treated with magnolol for 48 h and lysed in RIPA buffer as previously described (26). Lysates were mixed with sample loading buffer and heated to 100 °C for 10 min. After proteins were separated by SDS-PAGE, the samples were transferred to PVDF membranes. Membranes were then blocked with 5% skim milk in TBST and then incubated with the specified primary antibodies overnight at 4 °C. Membranes were then incubated with secondary antibodies for 2 h at room temperature. Protein bands were visualized using enhanced chemiluminescent detection reagent.

KYSE-150 cells (1×106) were subcutaneously injected on the right side of the dorsal area of 4-week old female nude mice. Tumor growth was observed daily. Mice bearing tumors were selected and divided into two groups (n=5 each): control group and magnolol (30 mg/kg) group. Magnolol was injected intraperitoneally every other day. Tumor size was measured using calipers, and the tumor volume was calculated using the following formulae; V = 1/2 × (length × width2). All animal procedures were approved by the Institutional Animal Care Committee of Shanghai Changzheng Hospital.

Data was expressed as mean ± SEM. Statistical significance was determined using the Student’s t-test or ANOVA analysis. P value of less than 0.05 was considered statistically significant. For all graphs: *P<0.05, **P<0.01, ***P<0.001. All calculations were performed using the SPSS 22.0 software.

Magnolol inhibits the proliferation of TE-1, Eca-109 and KYSE-150 cells 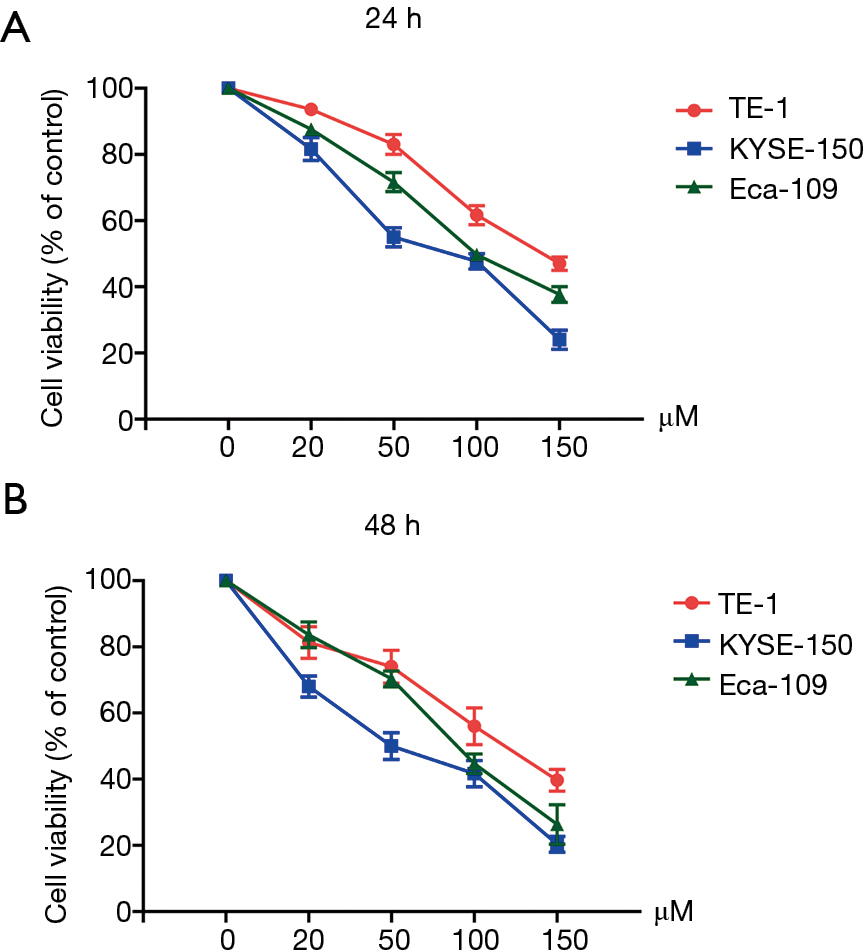 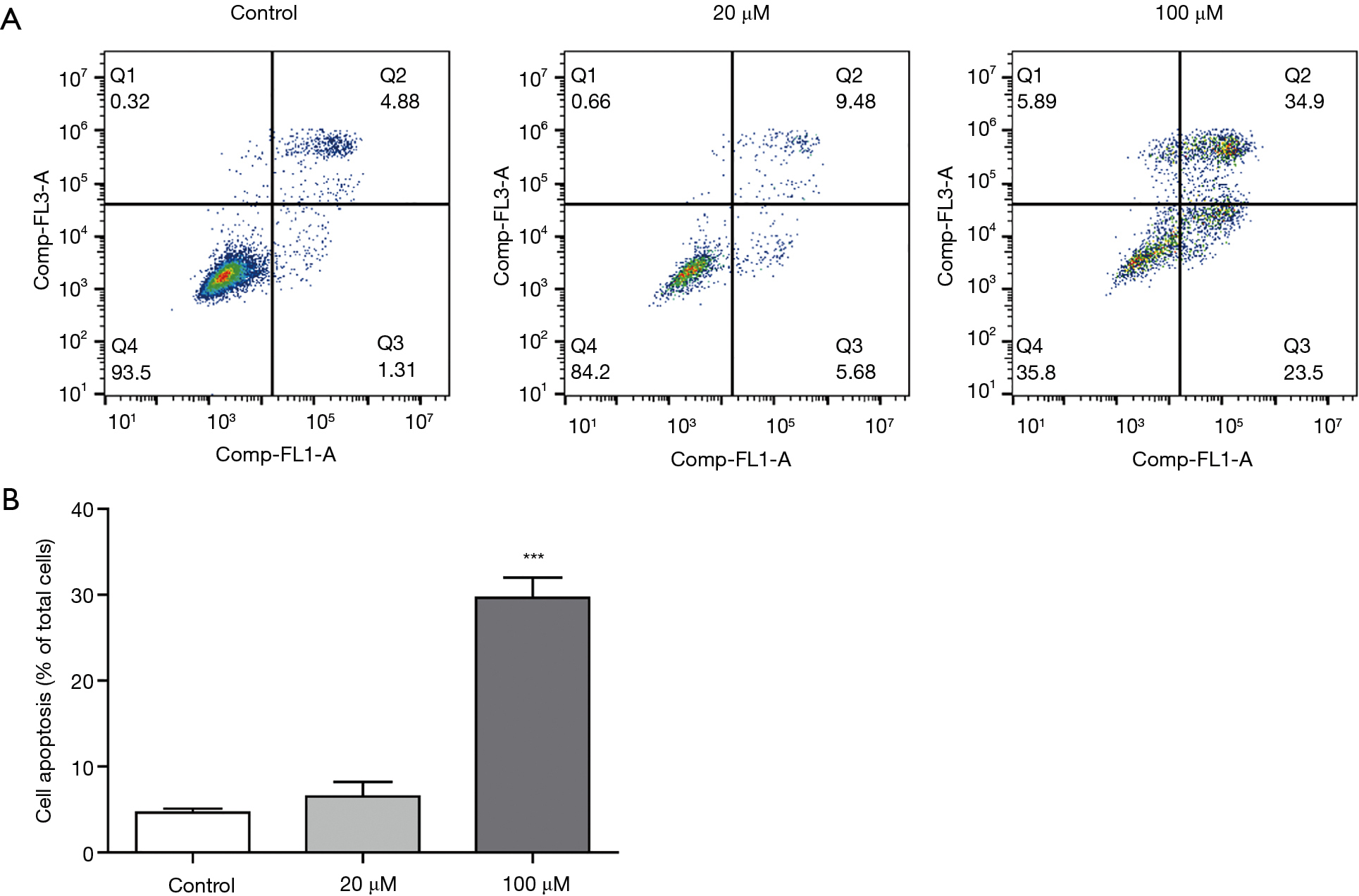 Figure 2 Magnolol induces cell apoptosis in KYSE-150 cells. (A) KYSE-150 cells were incubated with magnolol for 24 h, harvested, and then stained with Annexin V and PI for ﬂow cytometry analysis to measure apoptosis. (B) The number of apoptotic cells for each treatment group after 24 h magnolol treatment. n=3; ***, P<0.001. 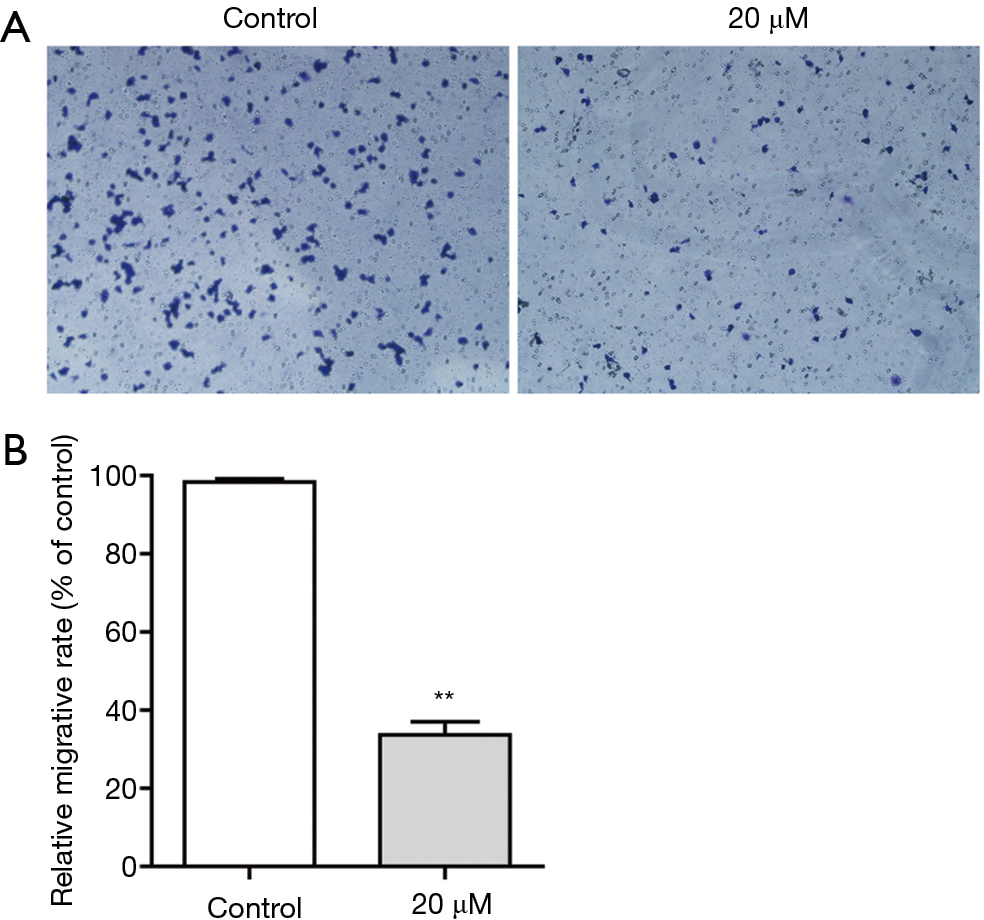 Figure 3 Magnolol affects the cell migration ability of KYSE-150 cells. (A) Media containing 10% FBS was placed in the lower chamber, and magnolol-treated KYSE-150 cells were loaded onto the upper chamber without FBS. (B) Migratory cells at the lower surface of the membrane were quantitated. n=3; **, P<0.005. 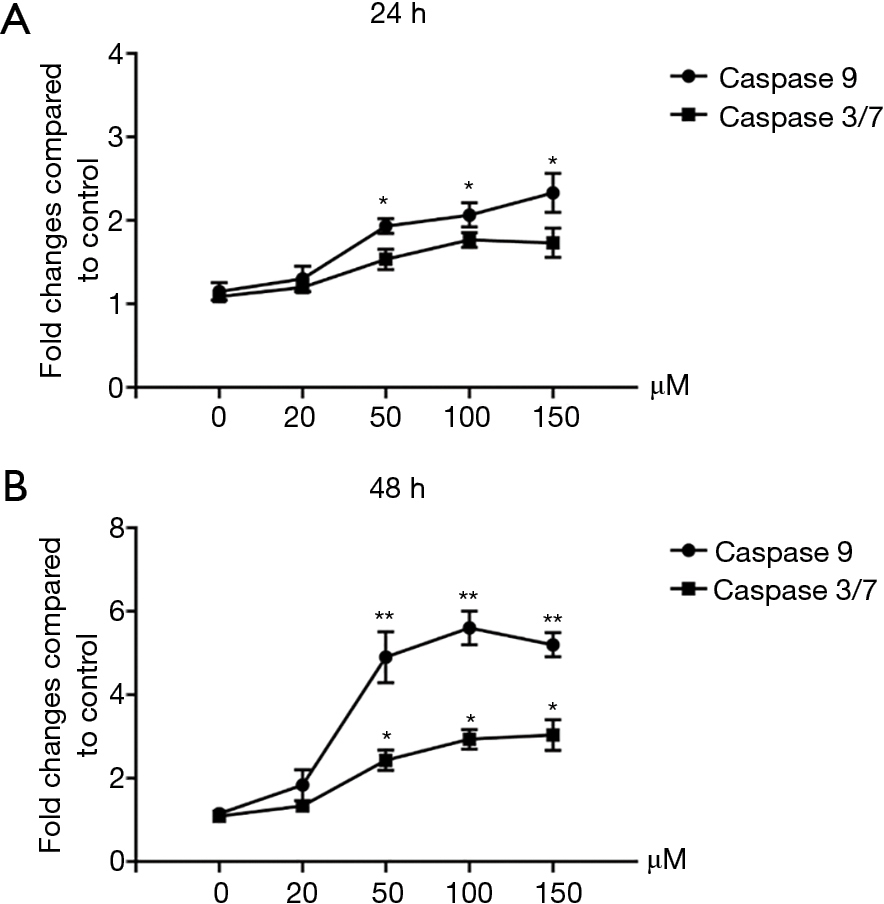 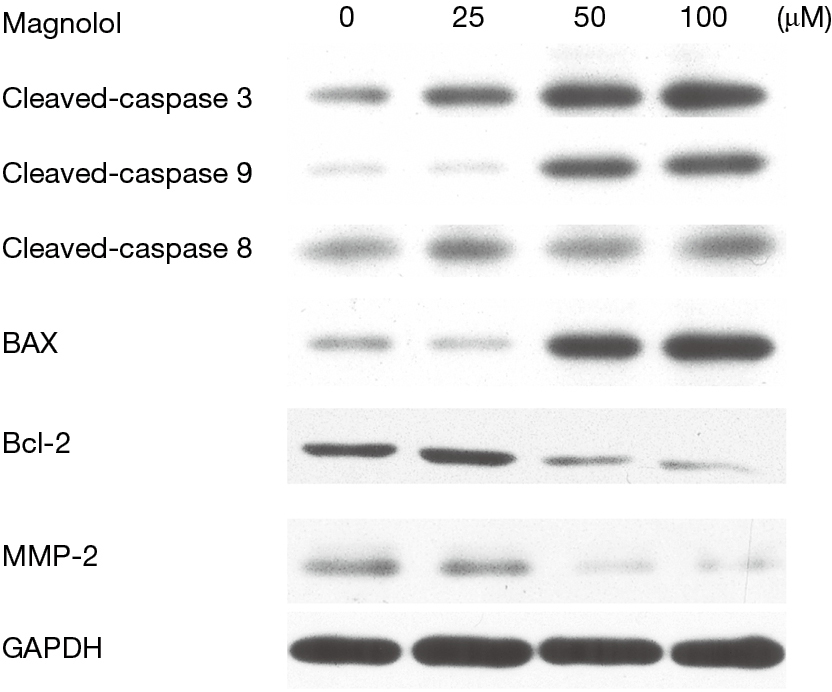 MAPK signaling pathway plays an important role in the regulation of cell apoptosis. To determine whether MAPKs are involved in magnolol-induced apoptosis, we measured the phosphorylation of p38, ERK and JNK by western blot analysis. 50 and 100 µM magnolol treatment increased the phosphorylated form of ERK and p38 as shown in Figure 6. However, phosphorylated JNK was decreased after 25 and 50 µM magnolol treatment. These results indicated that ERK and p38 may play an important role in magnolol induced apoptosis. 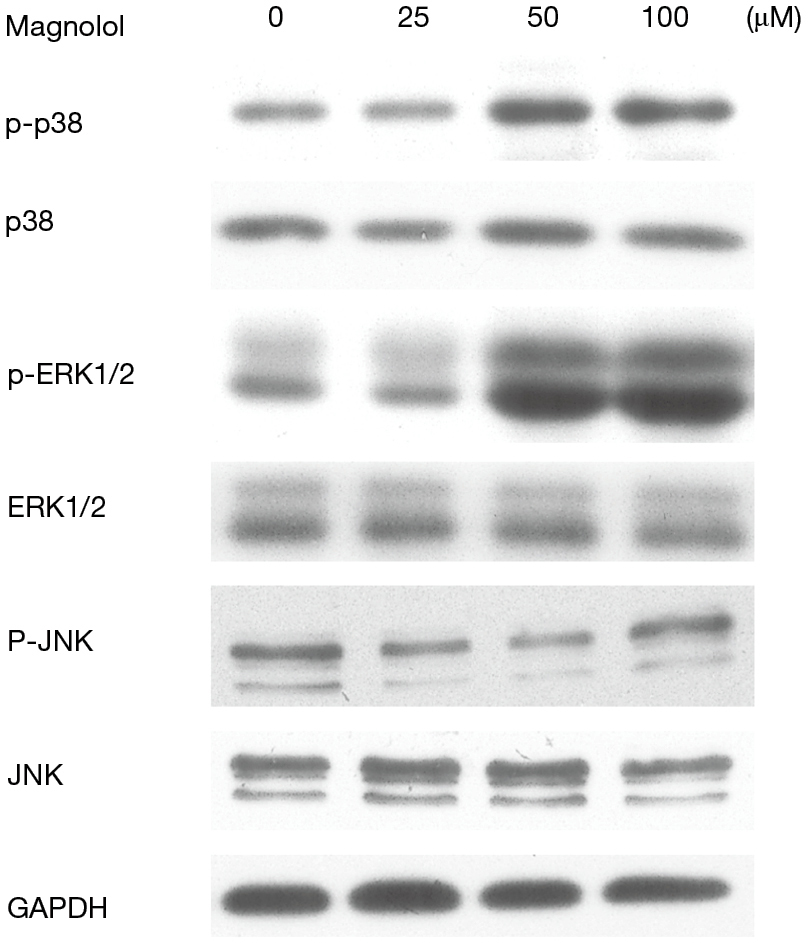 Esophagus cancer is categorized into esophagus squamous cell carcinoma (ESCC) and esophagus adenocarcinoma (EADC). Both subtypes have a high incidence, especially in Eastern Asia, Western America and Oceania (27). Smoking, alcohol and nutrient deficiency are the main risk factors for ESCC, and are commonly observed in developing countries. However, the incidence of EADC are generally observed in developed countries. The risk factors for EADC are age, smoking, obesity and a diet deficient in vegetables (28,29). Overall, the number of ESCC patients are much higher compared to the number of EADC patients worldwide (30). Regardless of the type of esophagus cancer, patients have a poor prognosis and a low quality of life. With the advances in medicine, there are several treatment strategies for esophagus cancer such as surgical resection, chemotherapy, and radiation therapy. However, these treatment methods are inadequate due to their serious side effects, lack of efficacy and tumor recurrence. The development of alternative and safer therapeutic options is vital. Natural compounds are safe, inexpensive, have good efficacy and fewer side effects and are gradually gaining interest and acceptance in the medical community.

Magnolol, a natural compound isolated from the root of magnolia officinalis, has been reported to have anti-oxidative, anti-cancer, anti-inflammatory, and anti-bacterial effects (31-34). However, the effect and mechanism underlying the anti-cancer activity of magnolol for esophageal cancer remains to be deciphered. In this study, we investigated the efficacy of magnolol treatment in human esophagus cancer KYSE-150 cells both in vitro and in vivo. We showed that cellular proliferation decreased significantly after magnolol treatment in a dose- and time-dependent manner.

Caspases are a family of cysteine proteases that play a critical role in apoptosis. When a cell receives an apoptotic signal, cytochrome c interacts with Apaf-1 and procaspase-9 to activate caspase-9. This in turn cleaves and activates caspase-3 and other caspases (35). The cleaved caspase-3 serves as a convergence signal for cell apoptosis. In this study, we found that Magnolol activated caspase-9 and capase-3, and significantly increased their protein expression. However, the levels of cleaved caspase-8 were unchanged.

The MAPK pathway consists of the p38, ERK and JNK pathway. Our data demonstrated that magnolol induced apoptosis in parallel with the activation of p-ERK and p-38, and the inactivation of p-JNK in esophagus cancer KYSE-150 cells. In xenograft tumor nude mouse models, in vivo treatment with magnolol significantly suppressed tumor growth. Treatment with 30mg/kg of Magnolol reduced tumor volume by over 50%.

Although magnolol had the inhibitory effect on KYSE-150 cell lines, we are unclear on the specific molecular mechanisms of this inhibitory effect. How magnolol exerts its apoptosis function through the MAPK pathway is yet to be deciphered. Magnolol activated both ERK and p38, while it decreased the phosphorylation of JNK. A MAPK pathway specific inhibitor should be used to investigate how magnolol exerts its apoptotic effect.

In summary, our data demonstrated that magnolol inhibited the growth of KYSE-150 cells both in vitro and in vivo by increasing apoptosis. These findings suggest that magnolol may have novel therapeutic benefits for the treatment of esophageal cancer.

Ethical Statement: The authors are accountable for all aspects of the work in ensuring that questions related to the accuracy or integrity of any part of the work are appropriately investigated and resolved. All animal procedures were approved by the Institutional Animal Care Committee of Shanghai Changzheng Hospital.