Adverse drug reactions (ADR) are potentially serious events which may occur after the administration of a drug. In particular, contrast-related ADR occasionally follow procedures requiring the administration of a radiocontrast mean (RCM), including non-invasive diagnostic examinations and cardiac catheterizations. While the incidence of ADR ranges between 3.8% and 12.7% for monomeric ionic RCM and 0.7% to 3% for non-ionic RCM, severe reactions are rare and are generally reported in less than 0.05% of cases (1,2). Based on timing from first contrast administration, ADR may be classified as immediate or acute (i.e., within 1 h, but generally within 20 min) and non-immediate (i.e., delayed, beyond 1 h) (1). Based on the clinical presentation and subtended mechanism, ADR are also classified as allergic­-like and physiologic, and can be further described as mild, moderate or severe (Figure 1A) (2-5). Allergic­-like reactions are idiosyncratic, immunoglobulin E (IgE) or non-IgE mediated, unrelated to dose, may occur in patients without prior exposure to RCM and do not predictably recur after each antigen exposure (Figure 1B) (6,7). Physiologic reactions are dose and concentration-dependent and likely related to direct chemotoxicity, osmotoxicity, or binding of endogenous molecules (Figure 1B) (7,8). 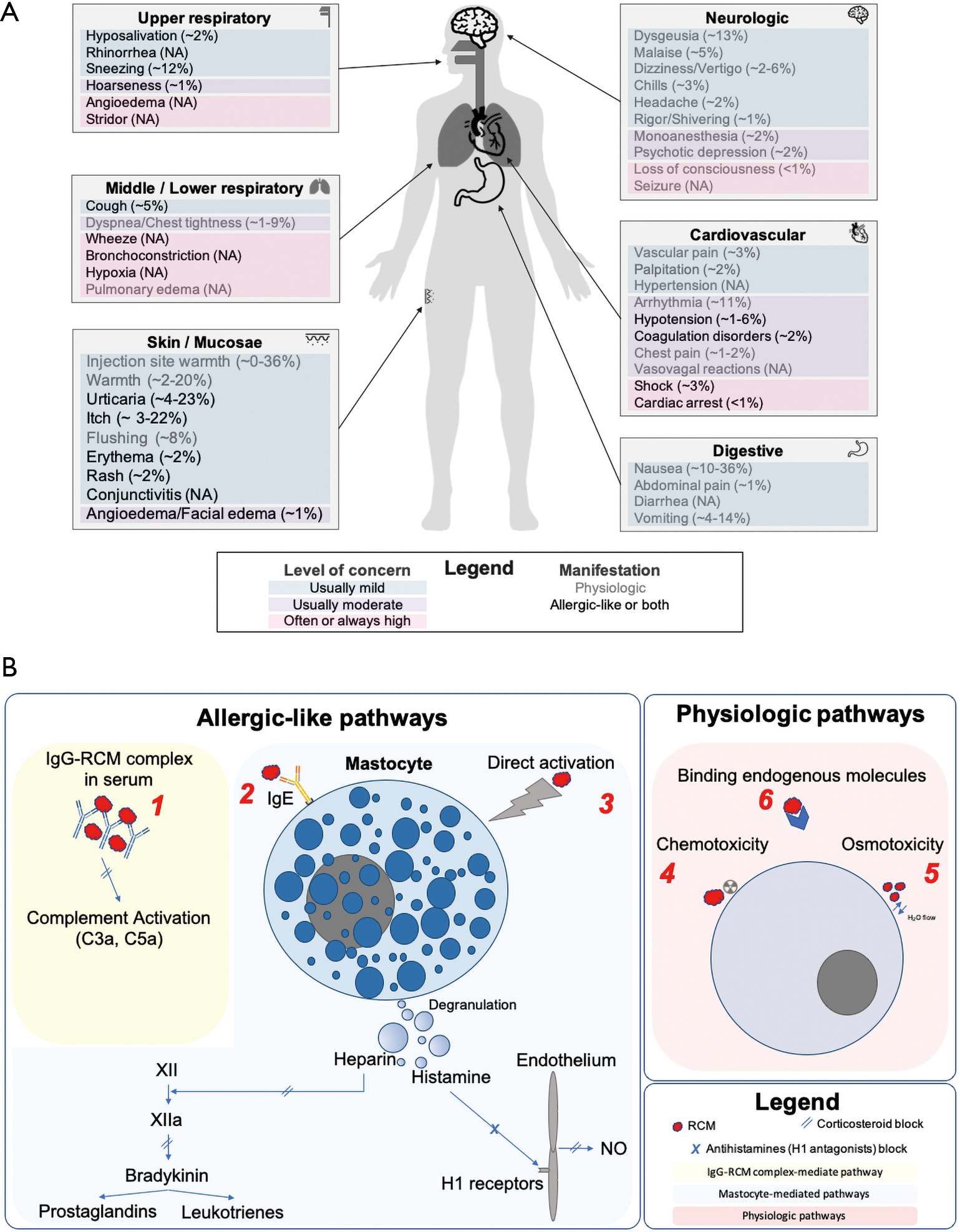 Figure 1 Clinical manifestations and main pathophysiologic mechanisms of acute drug reactions. (A) Clinical manifestation of acute drug reactions. Main clinical manifestations of ADR and their relative frequencies (where available), according to the apparatus affected. Signs and symptoms are further divided according to the subtended pathophysiology (i.e. allergic-like or physiologic); reactions with both allergic­-like and physiologic features or those where the categorization is ambiguous are treated like allergic­-like; (B) main pathophysiologic mechanisms of acute drug reactions. [1] RCM can bind IgG making serum circulating complex. This IgG-RCM complex can activate the complement, generating activated complement factors (C3a and C5a); [2] RCM can activate mastocyte though IgE-dependent and [3] IgE-independent (generally direct activation) pathways. The release of histamine due to the degranulation of activated mastocytes stimulate the release of nitric oxide from the endothelium via H1 receptors. Moreover, the heparin released by mastocytes activate XII factors, leading to the release of bradykinin and therefore prostaglandins and leukotrienes. RCM can cause a wide range of physiologic effect due to chemotoxicity, osmotoxicity, or binding endogenous molecules. The effect of corticosteroids or antihistamines drugs are depicted as described in the legend. Ig, immunoglobulin; RCM, radiocontrast mean; NO, nitric oxide; ADR, adverse drug reactions.

Although acute RCM-related ADR are uncommon, their consequences are potentially catastrophic, which sets the rationale for risk stratification to predict and prevent these complications. In various studies, a number of risk factors for ADR have been identified (Table 1). However, so far, no predictive model has been universally recognized. Indeed, there are challenges making model fitting for this event even more complicated than usual. Firstly, the low incidence of contrast-related ADR requires an extremely large sample size for the purpose of adequate statistical modelling. Secondly, the classic definition of ADR (i.e., any abnormal symptoms within an hour after the contrast administration) fits badly in the context of cardiac catheterization, particularly in the setting of acute coronary syndromes, where many other drugs can play a role, including antiplatelets or anticoagulants, local anaesthetics, sedatives and analgesics. In addition, in acute patients with unstable conditions or those presenting with comorbidities, it is often difficult to attribute new symptoms to ADR or not (e.g., when they complain of dyspnoea or chest pain, or when vital parameters deteriorate). 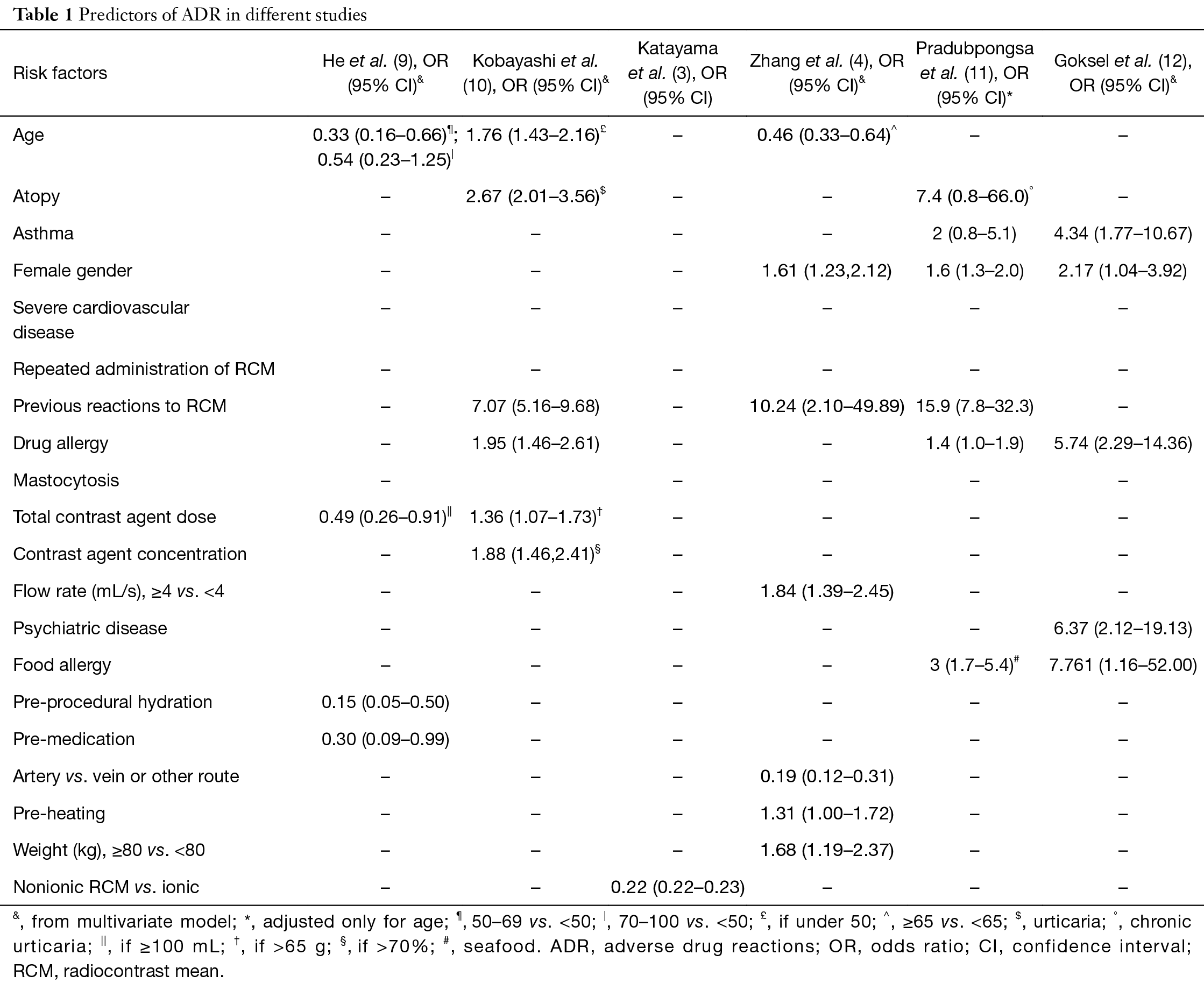 In the Safety and toleRability of UltraviSt in Patients Undergoing Cardiac CaTheterization (TRUST) trial, encompassing a population of 17,513 Chinese patients, the rate of acute ADR after iopromide administration during coronary angiography or percutaneous coronary intervention was 0.38% (2). Recently, the investigators used the TRUST dataset to build and validate a predictive model for RCM-mediated acute ADR (9). Two groups were randomized according to a 2:1 ratio into a derivation and validation dataset (n=11,426 and 5,713, respectively). Based on weights for single risk factors derived from a multivariable model, they built the following formula: 1 (for patients <50 and ≥70 years) +1 (if RCM dose <100 mL) +2 (if preprocedural hydration not performed) +1 (if premedication not performed). The model demonstrated an acceptable discrimination, with an area under the curve of 0.694, which is in the range of many of the scores available to guide decision making in clinical practice.

The authors should be congratulated for their effort in building a risk stratification tool for a challenging clinical scenario. Yet, some methodological aspects should be discussed, that limit the practical use of this tool in daily routine. Firstly, the low incidence of ADR events in the development group (n=42) limits the number of variables admitted in the model to avoid overfitting. In fact, the general rule of thumb of using 1 variable for a minimum of 10 events applies to the initial model (e.g., before the selection of the variables) and not to the final model (e.g., when the number of variables has been restricted by the statistical process). Secondly, in building their model, the authors prioritize simplicity over accuracy assigning 1 or 2 points to variables that showed a relatively wide range in their strength of association, with odds ratios spanning from 0.155 to 0.491. User-friendliness is not a bad feature per se, but the other side of the coin is some loss of information and predictive ability when various coefficients are flattened by dichotomization. Thirdly, the authors claim a good discrimination and predictive ability for their model. Unfortunately, a C statistic <0.7 is far from ideal, and important statistics as positive predictive value, negative predictive value and global accuracy were not calculated. Finally, lack of external validation limits the external generalizability of the study findings.

Other considerations can be raised concerning how the authors interpreted the association of their selected variables with ADR, e.g., the reason why the amount of the contrast seems to counterintuitively protect from acute ADR. Indeed, even if selection of candidate variables according to their significance at univariate analysis is a commonly adopted procedure, this method should not be disjointed by a reflection on their clinical plausibility with respect to the outcome of interest. For example, since most of acute reactions occur within some minutes from the first contrast injection, the total amount of contrast could falsely result as a protective factor because when the ADR occurs the procedure is likely interrupted prematurely (i.e., preventing from further injection of the contrast). The contrast dose has been previously included by Kobayashi et al. as an independent variable in a predictive model, resulting into a significant association with the risk of ADR (at variance with the findings of He et al.). In that study, all patients underwent contrast-enhanced computed tomography, where the amount of contrast is easily predictable and it is injected as a rapid bolus. As such, the confounding effect of halting the procedure (and contrast injection) does not apply to that scenario (10). Moreover, it should be noted that the contrast dose, such as the other variables included in the model (i.e., premedication and prehydration) are periprocedural factors. These variables are often affected by some confounders, which are not completely controlled in the multivariable analysis. Even more importantly, a model almost entirely composed of periprocedural variables does not predict the intrinsic risk of ADR in a patient, but rather explores the presumptive effect of these iatrogenic/prophylactic variables on the upstream risk of ADR. As such, the practical relevance of the score is undermined, because risk stratification is allowed only after the procedure, rather than before, when preventive measures can be put in place.

Interestingly, in the study of He et al., the history of ADR was not found to represent an independent risk factor. This could apparently lead to rethink the paradigm of ADR prevention, since a history of ADR is considered as one of the strongest risk factors for ADR and one of the most important indication to prophylactic therapy before the procedure (13,14). One of the several possible explanations for this finding relates to the notion that the protocol of TRUST left the decision of prehydrating and premedicating patients to the discretion of clinicians. Hence, almost all patients with a history of ADR might have been adequately premedicated and hydrated, resulting into an underestimation of the true role of previous ADR as a risk factor of ADR recurrences. This observation raises another note of caution on the interpretation of the results, since several variables tested in this analysis cannot be fully controlled by the TRUST study design. Finally, regarding age as a candidate predictor, because the authors allowed only for the comparison of an age range between 50–69 vs. <50 years and 70–100 vs. <50 years (thus neglecting the comparison between the 50–69 vs. 70–100 years strata) it is unclear why they finally chose to dichotomize age merely as including or not including the 50–69 range. In order to analyse this range as a risk or protective factor, the stratum should have been set as reference and compared with the other two strata at the extremes.

The above limitations notwithstanding, this study has a role in advancing the understanding on the topic, particularly for the significant sample size of the parent trial. Ideally, the data from the TRUST trial could be combined with other large populations, such as those studied from Kobayashi et al. (or other non-Asian populations, in order to increase the external validity), in order to train and validate a model that could be more robust and universally recognized (10). An interesting sub-analysis could study separately the predictors for physiological and allergic-like ADR, which could imply different risk factors (reflecting the different underlying pathophysiology) (15). Because of the intrinsic limitation of analysing the ADR phenomenon, we cannot expect any future model to display a very high accuracy, but such risk model would help clinicians in reflecting on modifiable risk factors for ADR.