Lung cancer is the leading cause of cancer-related deaths worldwide, and non-small cell lung cancer (NSCLC) accounts for approximately 80% of the lung carcinoma cases (1). Treatments for NSCLC patients include surgery, chemotherapy, radiotherapy, and targeted therapy. Fortunately, a randomized controlled trial (RCT) has shown that resected NSCLC patients benefit from adjuvant chemotherapy (2). However, the use of postoperative adjuvant chemotherapy for stage IB NSCLC in the setting of standard therapy remains controversial (3).

A systematic literature search was conducted for the following terms: “lung cancer” (MeSH Terms) AND “adjuvant chemotherapy” (MeSH Terms) AND “surgery” (MeSH Terms), and was used to achieve the maximum sensitivity in the electronic PubMed, Embase, and Cochrane Library databases from the earliest publications to June 2018.

The criteria for inclusion were as follows: (I) resected NSCLC patients who received adjuvant chemotherapy or observation were eligible for inclusion; (II) an accurate p-stage IB (T2N0M0) NSCLC based on the 6th (same as 5th edition) and 7th edition of the Union for International Cancer Control Tumor Node Metastasis classification; and (III) all articles were published in English. The following studies were excluded: (I) NSCLC patients who received preoperative or any other postoperative antitumor treatments; (II) case reports, expert opinions, abstracts, conference presentations, guidelines, reviews, and low quality studies (Grade C); (III) data which could not be extracted from the literature; and (IV) if repeated results were chosen, the study with the smallest sample was excluded.

All statistical analyses were conducted using Review Manager 5.3 software. The I2 test was used to appraise the heterogeneity in the meta-analysis. If the heterogeneity was low (I2 ≤50%), the fixed-effects model was used. Otherwise, the random-effects model was used (I2 >50%). Sensitivity analyses and subgroup analyses were used to evaluate the sources of heterogeneity. The evaluation of publication bias was analyzed using the funnel plot, and differences were considered significant at a value of P<0.05. 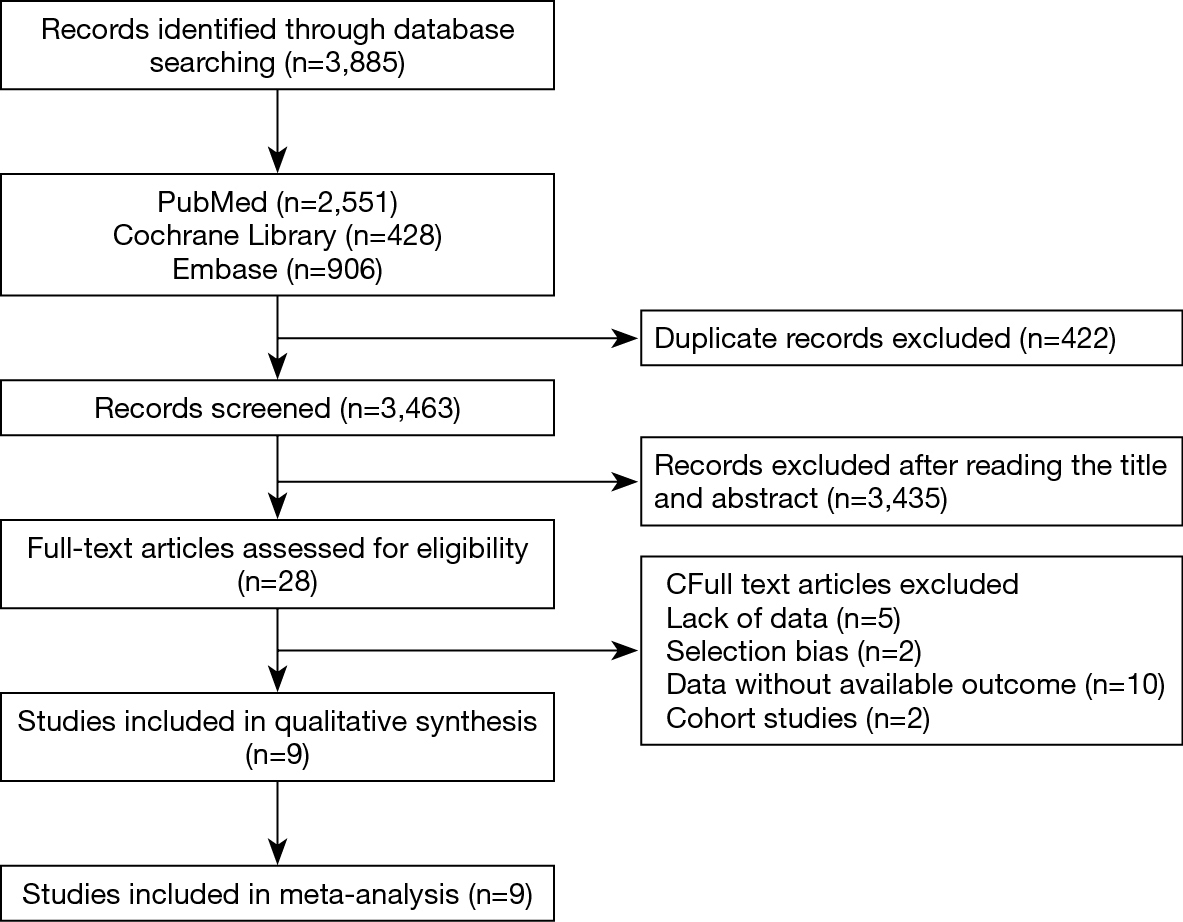 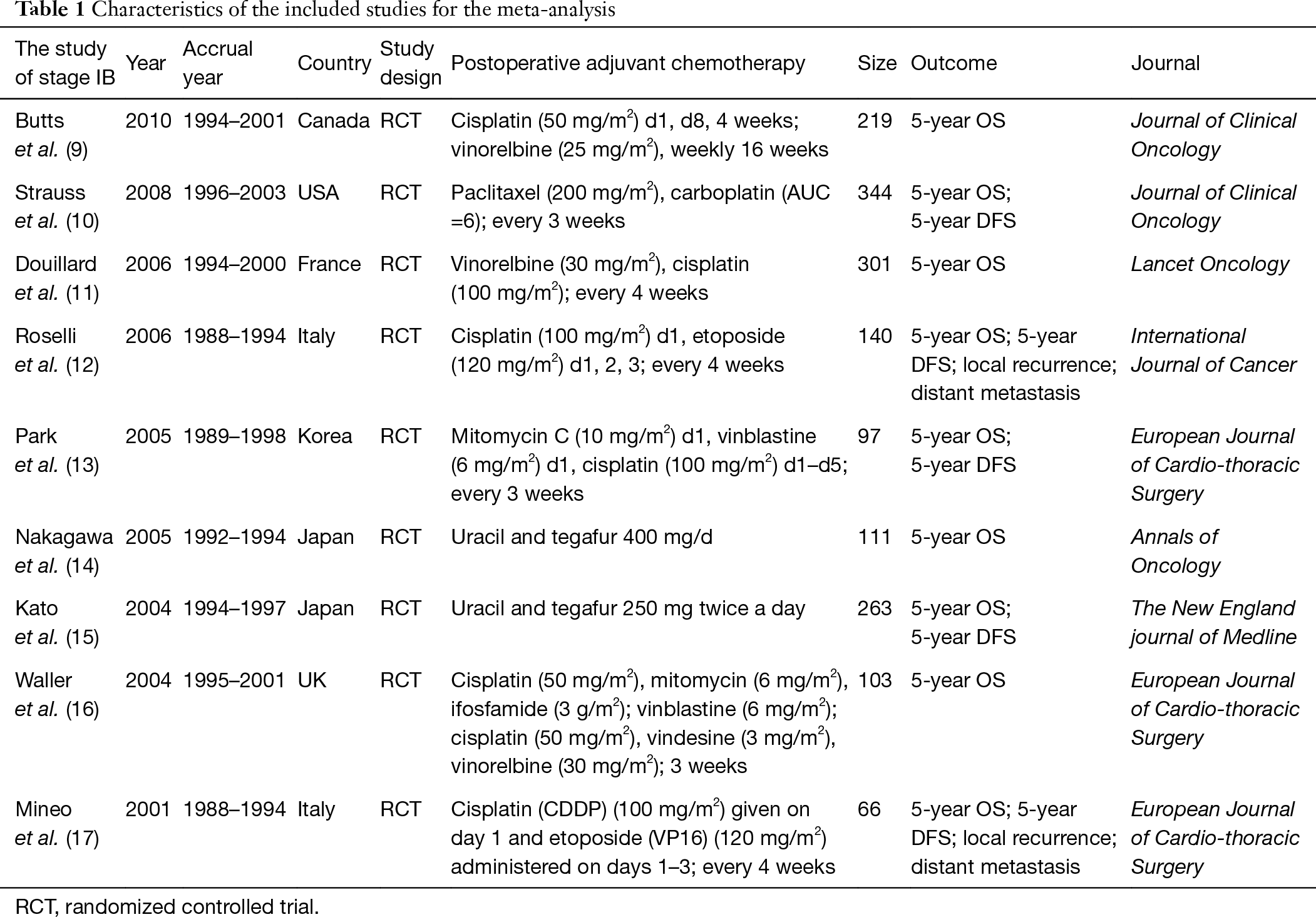 There was no significance in the 5-year OS [relative risk (RR) =1.05; 95% confidence interval (CI): 0.98–1.13; P=0.14] (Figure 2) between postoperative adjuvant chemotherapy versus observation. There was low heterogeneity, so the fixed-effects model was used.

The analysis of methodological quality

The Cochrane Collaboration’s tool was used for RCTs (Table 2).

The analysis of sensitivity analysis and publication bias

The sensitivity test was conducted by successively excluding individual studies and recalculating the consequences. However, the source of heterogeneity was not confirmed by using sensitivity analysis in the analysis of the 5-year DFS. The evaluation of publication bias was analyzed by the funnel plot, which was an asymmetrical funnel diagram when the data were biased. The analysis showed that multiple points were evenly distributed on both sides of the longitudinal axis, so there was no obvious publication bias (Figure 6). 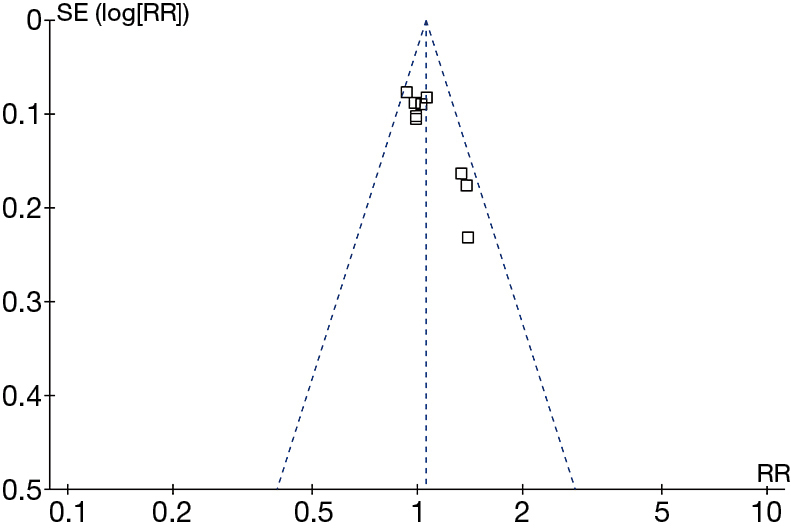 Remarkably, based on the results of previous meta-analyses, Burdett et al. (20) reported that platinum-based adjuvant chemotherapy in patients with stage IB tumors was similar to estimates for patients with stage II and III tumors. However, it was found that the relative effect of adjuvant chemotherapy did not differ significantly by stage in their meta-analysis. Although application of the overall hazard ratio to survival in the control group by stage suggested absolute improvements in 5-year survival of 5% of the patients with stage IB (from 55% to 60%), there were no significance between postoperative adjuvant chemotherapy and observation in stage IB NSCLC patients. These results differed from our conclusion, which might be explained by the eligibility criteria for inclusion involved in the p-stage I to IV disease in the previous meta-analysis. However, the criteria for inclusion in our meta-analysis was p-stage IB (T2N0M0) NSCLC, so it was a more targeted analysis.

Our meta-analysis had several limitations. There was a limitation of sample size in the study. In addition, the patients’ individual data included sex, age, smoking, type of pathology, differentiation, tumor size, type of chemotherapy, tumor marker, and drug toxicity. If the data were available, we might perform a more comprehensive guideline study for stage IB NSCLC patients in the future and could find the sources of heterogeneity.

We would like to thank Dali Tian, at The Fourth Affiliated Hospital of China Medical, for study design and critical review.

Ethical Statement: The authors are accountable for all aspects of the work in ensuring that questions related to the accuracy or integrity of any part of the work are appropriately investigated and resolved. All data in this study were obtained from databases, so ethical approval and informed consent are not required.