Cervical esophagogastric anastomosis and thoracic esophagogastric anastomosis are the two most commonly used surgical methods for esophageal cancer (1,2). The two anastomosis methods have their own advantages and disadvantages. The procedure of cervical esophagogastric anastomosis is simple, and the required traditional surgical skills are low; thus, this technique is more popular among young doctors. However, cervical anastomosis is more likely to cause stenosis and fistula than intrathoracic anastomosis (3). Data show that the incidence of cervical anastomotic stenosis is approximately 15–35% (4,5), the incidence of fistula is approximately 5–10% (6,7), and the incidence of thoracic anastomotic mediastinal fistula is approximately 3–5% (8). The use of a mechanical stapler in the neck reduces postoperative stenosis caused by manual operation to a certain extent, but esophageal stenosis is a composite result of multiple factors. The use of a single staple plays a limited role in reducing anastomotic stenosis, and cervical anastomotic fistula is also a comprehensive result of multiple factors (9). Based on the use of a mechanical stapler, in this study, we creatively employed Neoveil® (10) during embedding at the esophageal anastomotic orifice to find a new method to reduce anastomotic stenosis and fistula after esophageal cancer surgery. The relevant results are summarized below.

A total of 128 patients with esophageal cancer admitted to the Department of Thoracic Surgery of The First Affiliated Hospital of Zhengzhou University from March 2018 to November 2018 were selected. The inclusion criteria for patients were as follows: undergoing cervical anastomosis with a mechanical stapler; tubular stomach used as the esophageal substitute; survival during the follow-up period; and with complete preoperative and postoperative medical records. The exclusion criteria were as follows: full manual end-side anastomosis; undergoing Sweet or Ivor-Lewis surgery; death during the follow-up period; and missing intraoperative and postoperative case data. There were 90 males and 38 females. There was no significant difference in age, sex, body mass index, blood type, tumour location, tumour differentiation, tumour stage, or other relevant data between the two groups (P>0.05). All patients underwent an enhanced chest CT plus abdominal plain scan before surgery in addition to ultrasound gastroscopy and thoracic duct imaging to determine the lesion site and infiltration level. The patients were screened for metastasis and serious cardiovascular diseases. The patients were divided into two groups according to the embedding materials, and the relative data distribution is shown in Table 1. 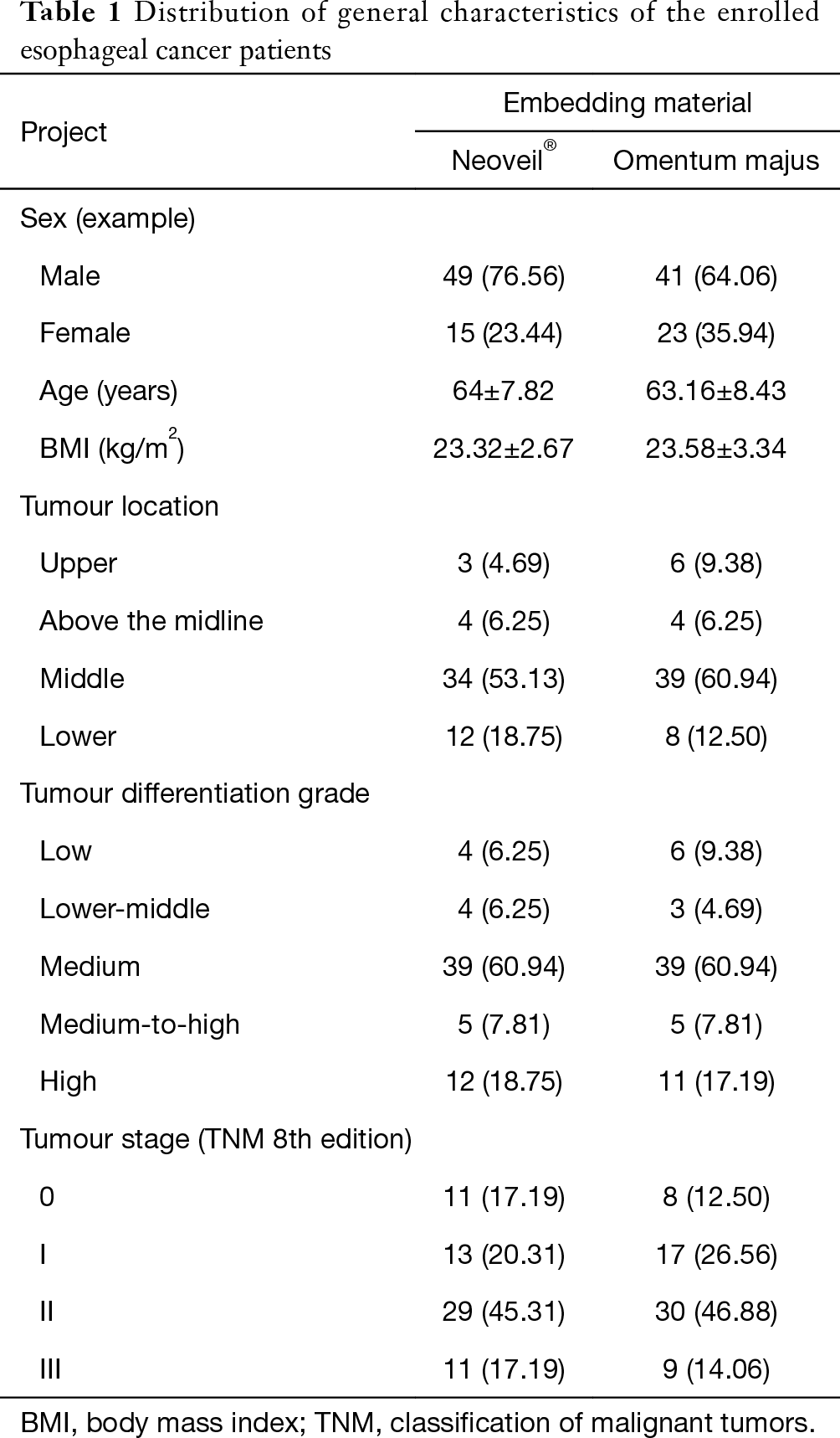 The operation was divided into two stages. In the first stage, the patient was in the left lateral position, and observation windows were established in the 7th rib of the right midaxillary line, the 4th intercostal space of the right axillary front, the 5th intercostal space of the midaxillary line, and the 9th intercostal space of the posterior axillary line. In the second stage, the patient returned to the supine position and raised his left shoulder. An observation window was established 1 cm to the left and below the umbilicus, and another 4 operation windows were established around the abdomen. The lower esophagus and stomach were dissociated according to routine methods, and the tubular stomach was isolated. The pruned omental membrane was tied to the end of the tubular stomach and pulled out of the abdominal cavity through the thoracic cavity for neck anastomosis. The omentum majus embedding group: Interstitial embedding of the residual gastric muscle layer was performed along the anastomotic site. The omentum majus head was lifted and cut open by 2–3 cm along a circular path, and an anastomotic window was created below the omentum majus to stitch the cut ends together with a suture needle tip to complete embedding. The Neoveil® embedding group: No part of the omentum majus was reserved. After the completion of mechanical neck anastomosis, lamellar Neoveil® repair scissors were wrapped around the anastomotic site, and both ends of Neoveil® were sutured on the plasma muscle layer of the anastomotic site to complete embedding (Figure 1). 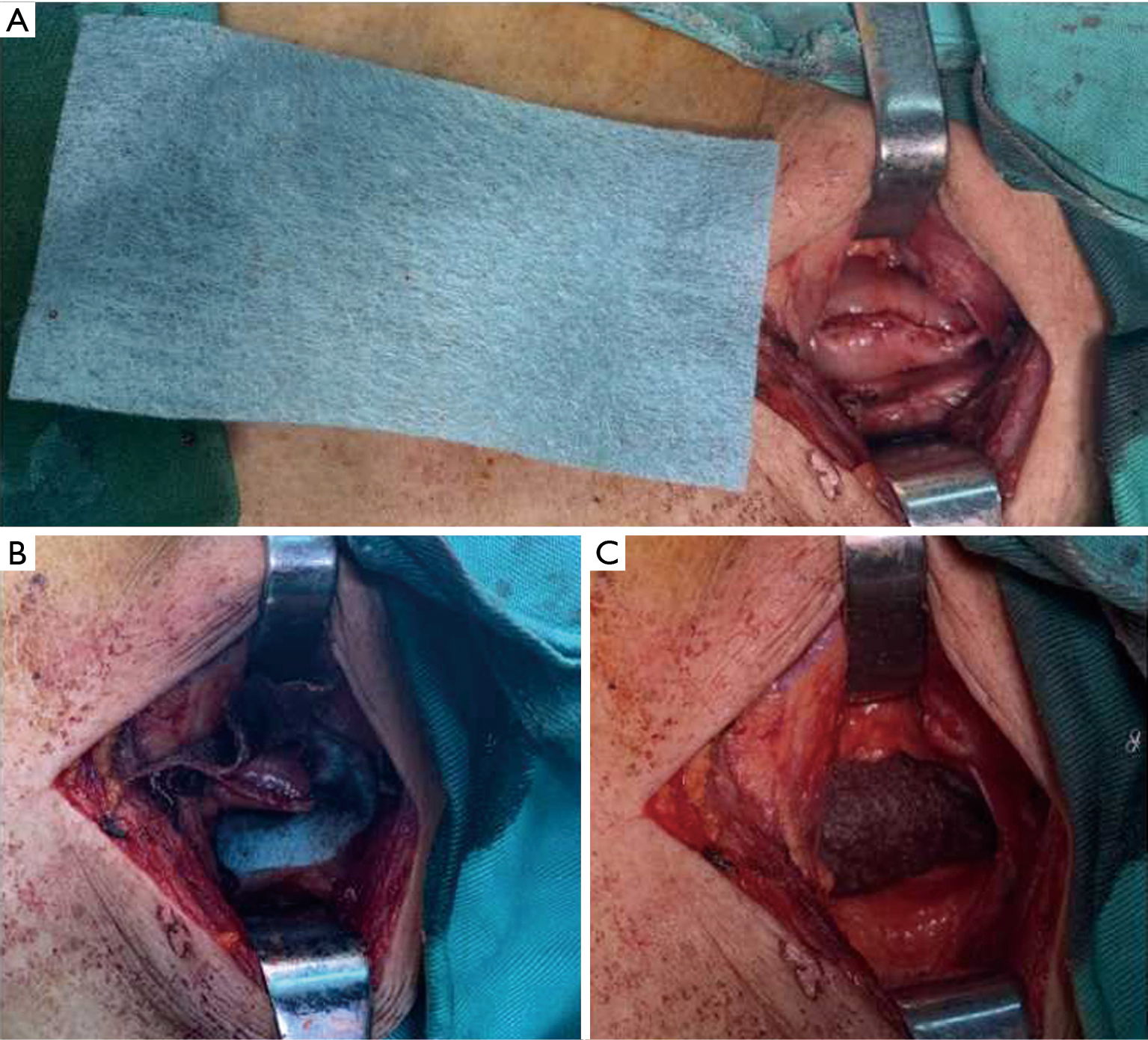 Figure 1 The process of mechanical anastomosis during neck embedding Neoveil®. 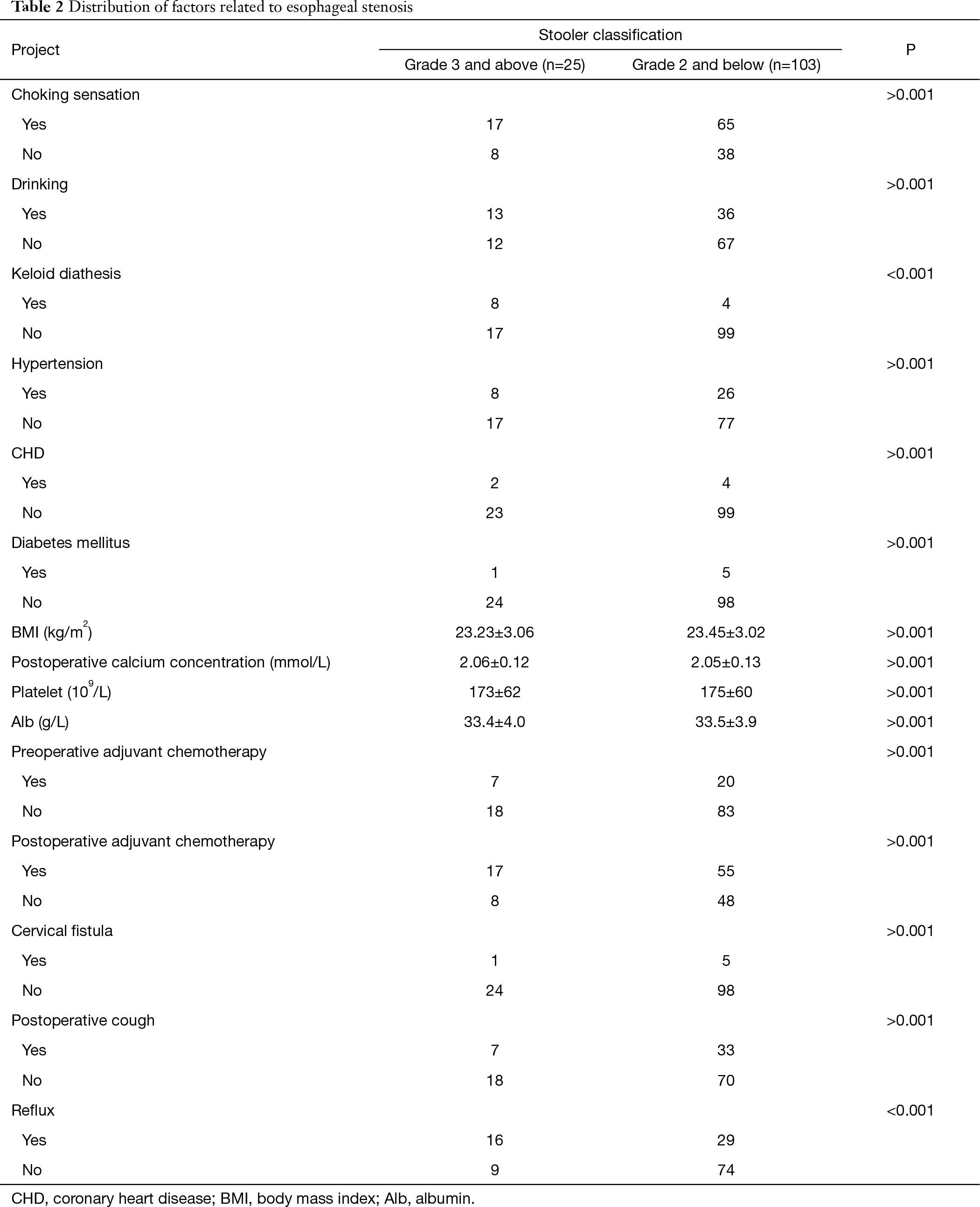 Statistical data for this study were analysed using SPSS 21.0 software. Measurement data are expressed as

. Independent sample t tests were performed for both groups. The relationship between embedding materials and anastomotic fistula and stenosis was evaluated usingχ2 tests (Table 3). P<0.05 was statistically significant. The distribution of anastomotic stenosis in the two groups is shown in Table 4. 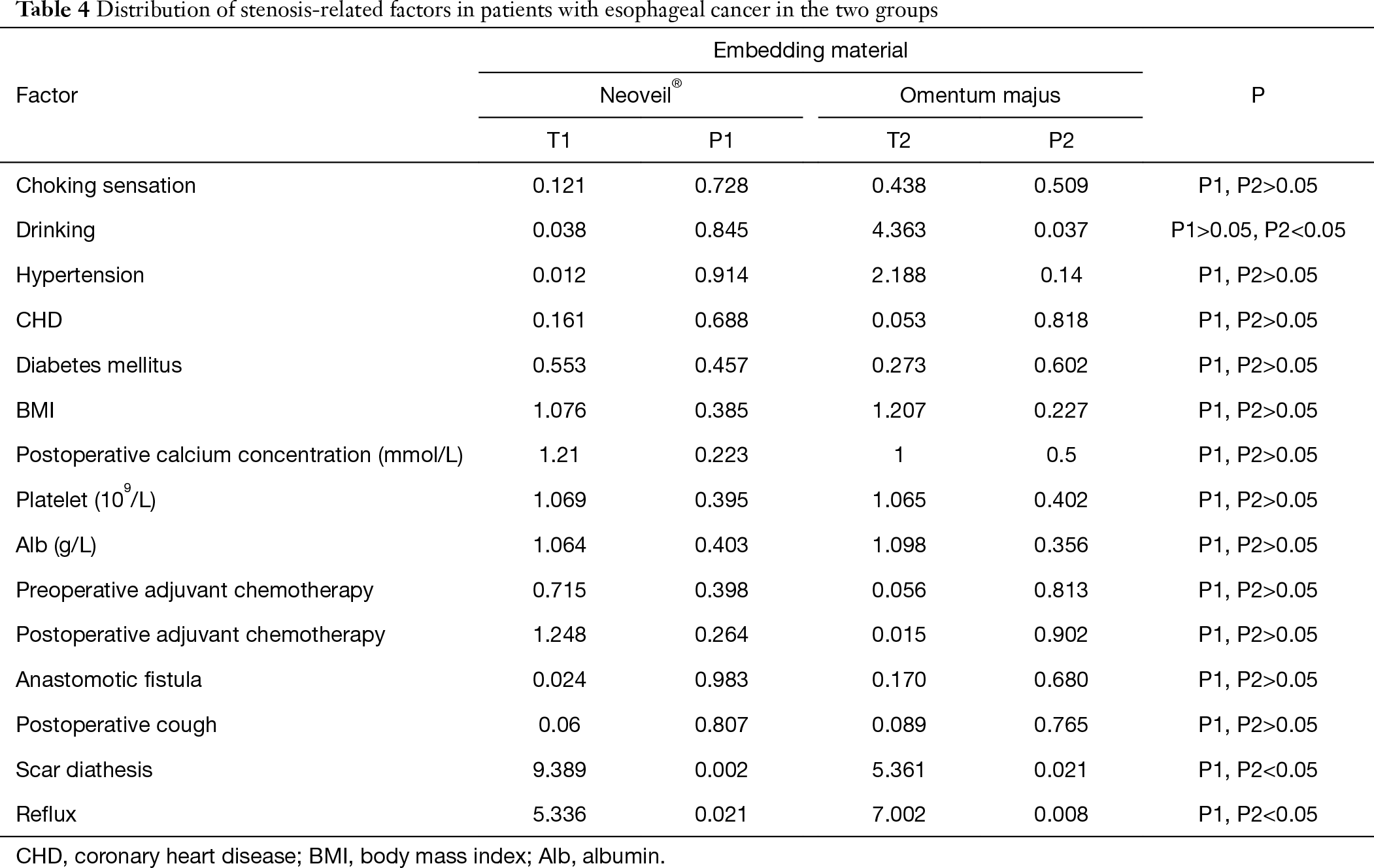 In this study, no deaths occurred among the 128 patients.

Neoveil® is a new type of hemostasis reinforcement material processed with absorbable polyglycolic acid (PGA) as the raw material (20). It is made into sheets or tubes according to different usages and has been widely used in various lung surgeries since its advent. This product is mainly used to reinforce the suture site and prevent air leakage at the lung incision, and it has been widely used in the repair of bronchopleural fistula (21) and various refractory pneumothoraces (22). The effect of tubular Neoveil® combined with an automatic cutting instrument in cutting lung tissue can effectively reduce the incidence of postoperative air leakage at the incision site (23,24). Furthermore, its high biocompatibility can effectively reduce the immune response induced by it being a foreign body (25). Scholars have attempted to apply Neoveil® in the reinforcement and stabilization of the liver, the intestinal tract, glands, meninges, and other vulnerable tissues, the results of which have shown that its performance is better than that of traditional materials, with a significantly reduced postoperative infection rate (26-30). Another study suggested that the rate of anastomotic fistula could be reduced by using Neoveil® as the support material (31).

Cicatricial constitution may be one of the risk factors for anastomotic stenosis in the neck, and is in no way related to the kind of embedding materials used. Scar constitution refers to the possibility of even minor trauma causing the formation of skin tissue larger than the original wound, leading to a keloid scar that does not easily fade (32). Scar constitution is related to certain genetic factors, but there are still no specific indicators to diagnose this condition, and it can only be diagnosed according to the clinical manifestations in patients. The size of the scar is related to the degree of injury, allergic constitution, and blood supply to the injured region. Deep and large wounds will cause strong immune responses, and people with allergies are more likely to experience a strong immune response, resulting in the accumulation of immune cells; additionally, excessive proliferation of fibroblasts is an important mechanism for scar growth (33,34). The venous reflux system at the injured site is closely related to scar formation. In general, poor venous reflux is more likely to cause scar enlargement and growth. The original venous reflux path after esophageal reconstruction is mostly cut off, and continuous hyperemia at the anastomotic site and strong inflammatory reactions may be important causes of stenosis (35).

Gastroesophageal reflux is one of the most common complications after digestive tract reconstruction (36), and it may also be a high-risk factor for cervical anastomotic stenosis according to data. At present, thoracoscopy combined with laparoscopy to free the thoracic esophagus and abdominal proximal gastric body, along with the final external reconstruction with tubular stomach tissue, are relatively mature surgical methods (37). However, after resection of the proximal gastric body, the anti-reflux mechanism is lost, and digestive juices of the patient can easily migrate upward when the patient is lying flat (38). Digestive juices are highly acidic, and the newly formed granular tissue at the esophagogastric anastomosis is more vulnerable to corrosion (39). The damaged site will cause an inflammatory response, which will lead to tissue deposition on the anastomotic site and eventually narrow the anastomotic site.

Anastomotic fistula is related to the embedding material, and Neoveil® has been shown to be superior to the omentum majus in preventing anastomotic fistula. Pedicled omentum majus is an excellent embedding material, is derived from the patient, and has no possibility of rejection (40,41). However, the omentum majus is prone to fat liquification, and it is difficult for the incision to heal in the liquid, which also increases the risk of anastomotic infection and fistula (42). After the occurrence of fistula, the omentum majus may not be able to form a strict isolating layer to prevent the spread of inflammation. Neoveil® can not only ensure efficacy but also overcome the limitations of traditional embedding materials. It can effectively strengthen the anastomotic site and simultaneously form a barrier against stimulation from the external exudate. Even if microfistula occurs after surgery, it can be wrapped locally, which is conducive to the healing mechanism of fistula (43,44).

Currently, Neoveil® is mainly used in the field of lung surgery. In this study, a limited attempt was made to apply Neoveil® to the embedding of the anastomotic site in the neck of esophageal cancer patients, and its value in clinical application needs to be explored and confirmed by more studies.

Ethical Statement: The authors are accountable for all aspects of the work in ensuring that questions related to the accuracy or integrity of any part of the work are appropriately investigated and resolved. This retrospective study was approved by the Medical Ethics Committee of the first Affiliated Hospital of Zhengzhou University, and the requirement for informed patient consent was waived due to the retrospective nature of this study.