Thymic carcinoma (TC) is a rare mediastinal tumor and accounts for about 14% of all thymic epithelial tumors (1). Compared with thymoma, TC is more likely to invade neighboring tissues and metastasize to distant organs. TC was, therefore, classified as a distinct entity from thymoma in the 2004 World Health Organization (WHO) classification (2).

Systemic chemotherapy remains the mainstay of treatment for advanced TC, although no standard chemotherapeutic regimen has been established due to its rarity. Several reports have shown the efficacy of cisplatin-based chemotherapy such as ADOC (cisplatin, doxorubicin, vincristine, and cyclophosphamide) and CODE (cisplatin, vincristine, doxorubicin, and etoposide) (3-4). In recent years, the combination of taxane (paclitaxel, docetaxel, or genexol-PM) with platinum has also shown efficacy in the management of TC (5-7). Based on the above results, these regimens are recommended as front-line chemotherapy for advanced TCs. However, what constitutes optimal treatment when first-line chemotherapy fails, or the patient’s performance status is too poor to tolerate high-density chemotherapy remains controversial.

S-1 is an orally active combination of tegafur (a prodrug of 5-fluorouracil) with gimeracil and oteracil. With the addition of the two modulators, the anti-tumor activity of tegafur is increased while the gastrointestinal toxicity is reduced. As of now, there are only a few case reports (8-11) investigating the efficacy of S-1 monotherapy for relapsed TC, and none included more than 5 patients. In this study, we evaluated the efficacy and safety of S-1 in 44 patients with relapsed TC, in order to better understand how to allocate candidates who would benefit from this oral agent properly.

The S-1 capsules (20 mg/capsule, produced by Lunan Pharmacy Co., Ltd., Shandong, China) were taken orally twice a day for 2 weeks, followed by a 1-week drug-free interval. There were three different dose levels (80, 100, and 120 mg), which were basically prescribed according to body surface area (BSA): 80 mg for BSA <1.25 m2, 100 mg for 1.25< BSA <1.5 m2, and 120 mg for BSA >1.5 m2. The dose, however, could be reduced to a lower level when the patient’s PS was judged as 2. Patients were advised to take capsules after meals for less gastrointestinal side effects. The cycles would be repeated unless disease progressed or intolerable adverse effect occurred. This study was approved by the Shanghai Chest Hospital Ethics Committee (ID No. KS1920). All patients gave their informed consent before taking part in this study.

Evaluation of response and toxicity

Computed tomography (CT) scan was performed every two cycles to evaluate the response status. All patients in this study were in the late stage, and the diseases often spread extensively; therefore, we adopted a new Response Evaluation Criteria in Solid Tumors (RECIST) guideline for the evaluation, which was proposed by the International Thymic Malignancy Interest Group (ITMIG) (12). The new guideline provides effective methods to calculate the response rate of complicated lesions, like multiple pleural implants or pulmonary metastasis. The adverse events were recorded and graded using the Common Terminology Criteria for Adverse Events version 4.0 (CTCAE 4.0).

Progression-free survival (PFS) and overall survival (OS) were estimated using the Kaplan-Meier method. The PFS was calculated from the initiation of S-1 until the date of disease progression or death from any cause. The OS was defined as the interval between the starting of S-1 and the date of death or the last follow-up. All statistical analyses were performed with SPSS 16.0. All tests were two-sided, and P values less than 0.05 were considered statistically significant. 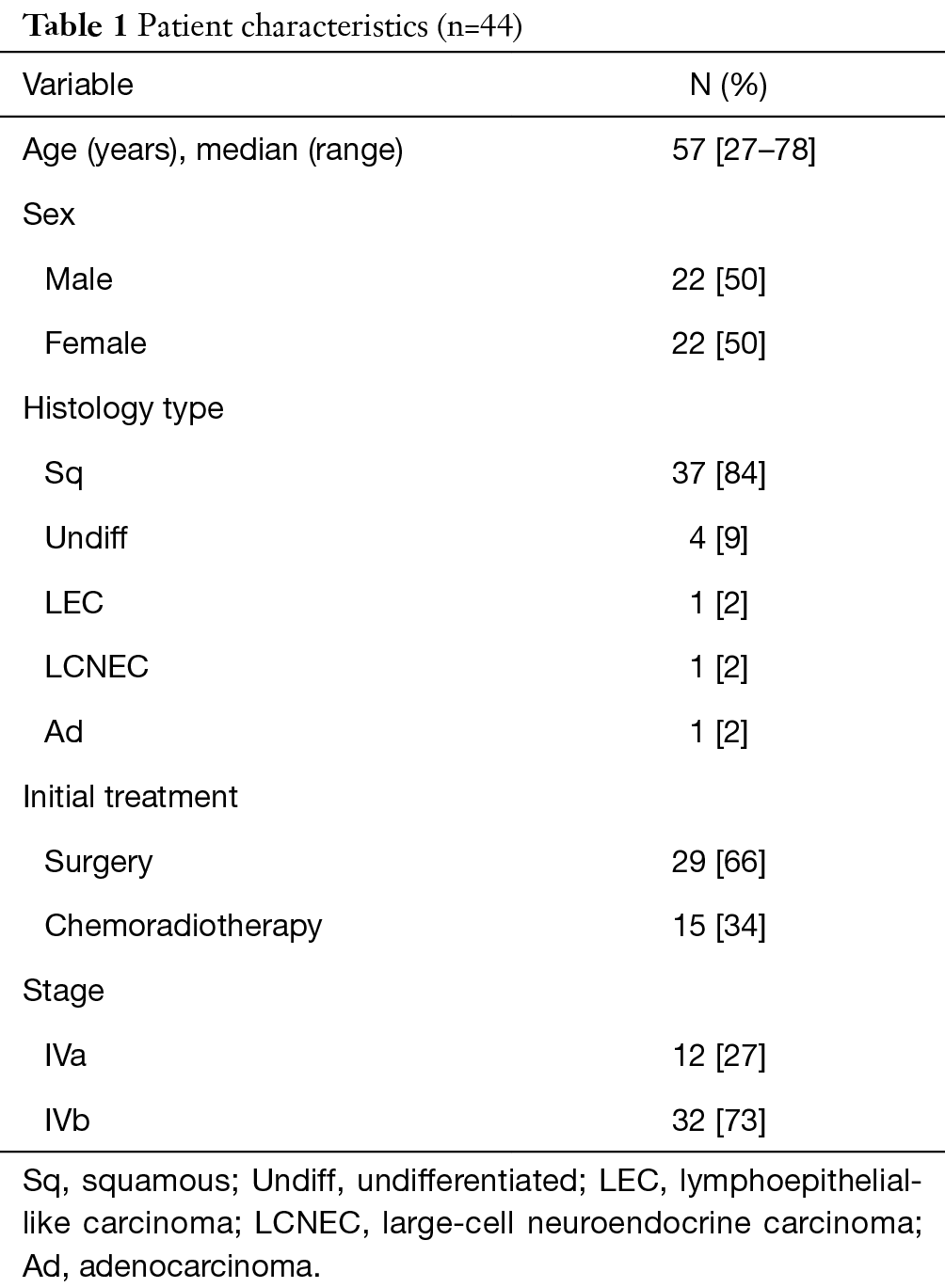 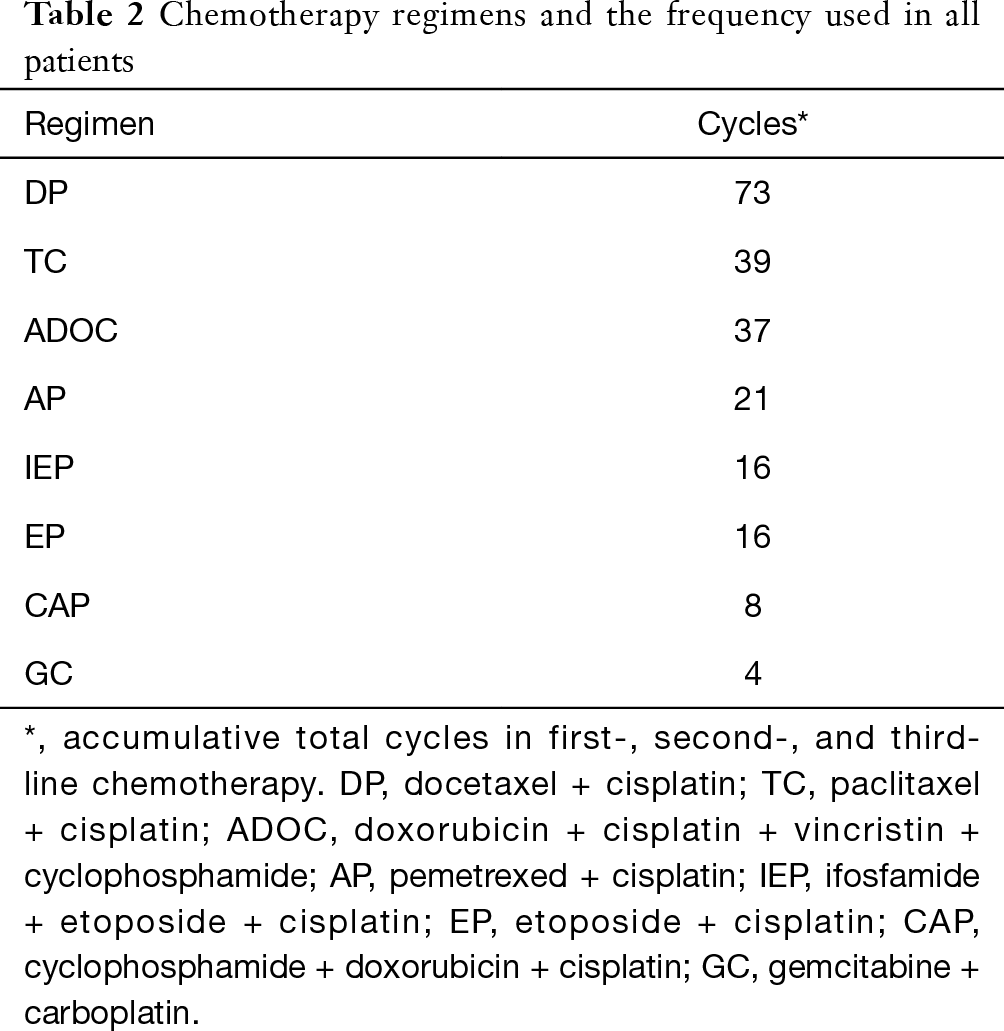 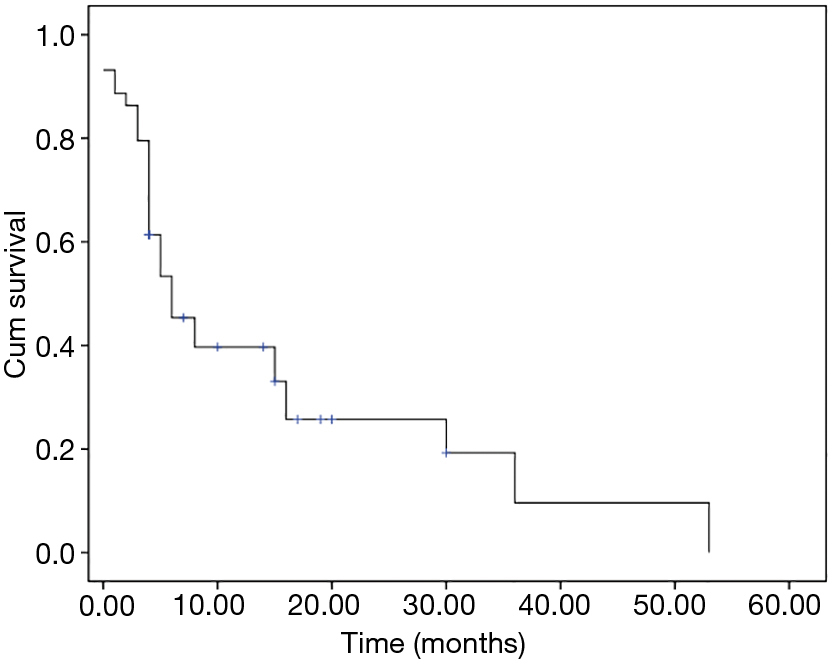 Figure 1 The progression-free survival for all patients. 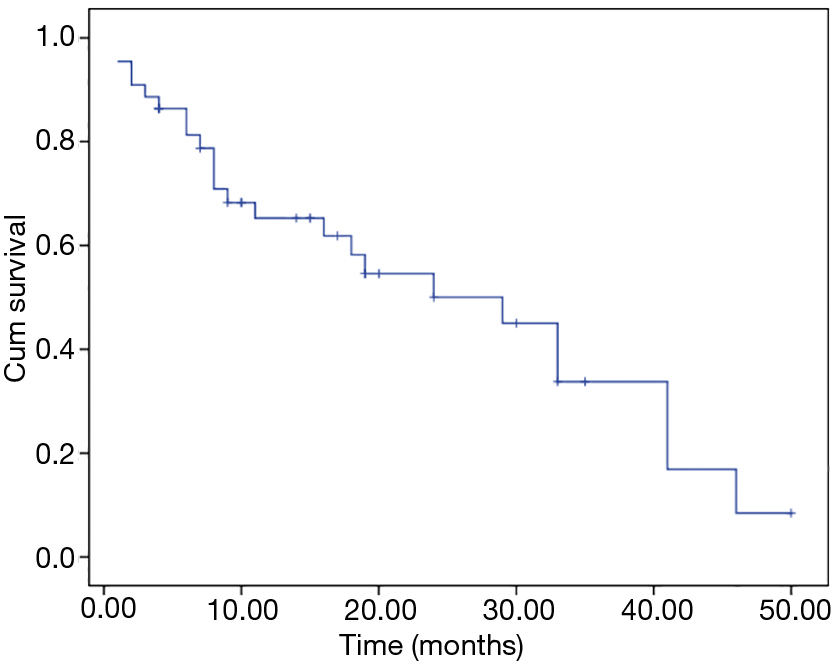 Figure 2 The overall survival for all patients. 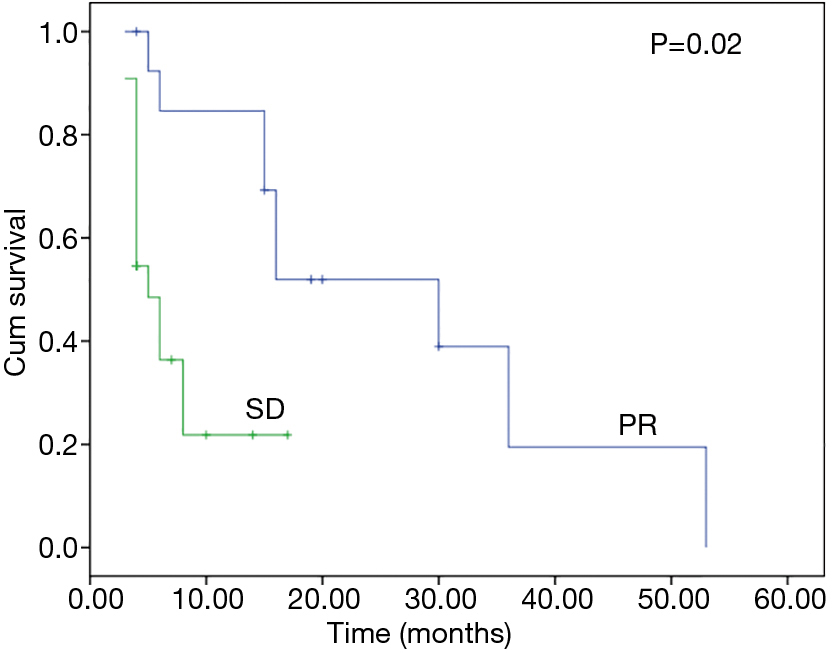 The toxicities in 44 patients are summarized in Table 4. No treatment-related deaths occurred. Appetite loss was the most common side effect, but most of them were mild and tolerable. Treatment was stopped in one patient after 4 cycles of S-1 due to a grade 3 neutropenia, which could not be improved by injection of granulocyte. Three patients had their drug intake suspended for 2–3 weeks due to grade 3 thrombocytopenia, and then resumed taking S-1 when their blood count returned to normal. One patient developed a grade 3 skin rash, which regressed gradually after a drug suspension.

In the current study, S-1 monotherapy demonstrated an ORR of 29% and a median PFS of 5 months with low toxicity in 44 patients, which suggested that S-1 could be applied as an effective salvage therapy for late-staged TC.

Due to the rarity of thymic neoplasm, the chances for randomized prospective trials are dismal. Thus, the optimal chemotherapeutic regimen for TC remains controversial. Several reports have shown the efficacy of cisplatin and anthracycline-based regimen, like ADOC and CODE in TC, with an ORR ranging from 42–75%. In recent years, new regimens have also been tested for TC. For instance, carboplatin plus paclitaxol, which has been proven successful in non-small cell lung cancer (NSCLC) yielded a promising ORR of 36% with lower toxicity. All the above regimens are currently recommended as front-line chemotherapies for TC by a few guidelines. However, these anti-cancer therapies cannot be endlessly repeated when patients’ tolerability and dose-related cardiac toxicity of anthracycline are considered. Unfortunately, there are few reports so far investigating the second-line or beyond chemotherapy when previous regimens fail. Generally, patients’ performance status deteriorates significantly after a series of intensive chemotherapy sessions, which makes an effective salvage therapy with low toxicity warranted when the disease progresses again.

S-1, a novel oral fluoropyrimidine agent, was invented in the early 1990s. The anticancer mechanism of S-1 has been clearly elaborated in previous reports (13). In a series of clinical trials, S-1 yielded an ORR of 40–60% in gastric cancer (14,15) and 36% in advanced colorectal cancer (16). From 1997, S-1 has gradually found approval for the treatment of gastric cancer, head and neck cancer, colorectal cancer, NSCLC, and other diseases. In 2008, Ono et al. (10) was first to report the efficacy of S-1 on TC in the English language literature. After this, several authors also explored S-1 monotherapy in TC, but none of the studies included more than 4 patients. Thus, it is difficult to arrive at a convincing conclusion about the efficacy and toxicity of this treatment. In the present study, 44 patients were enrolled, which is a greater sample than the sum of all the previous reports. The ORR of the whole group was 30% (13/44), which is no worse than other single agents (31% for docetaxel, 11% for pemetrexed, 44% for amrubicin, 12.5% for etoposide and 0% for ifosfamide) (17-21). The median PFS at 6 months was also similar. It should be especially noted that the toxicity of S-1 was milder and more tolerable, which is consistent with the result of S-1 on other solid tumors. The high acceptability of this agent enables several responding patients to resume S-1 for more than even 2 years.

Thus far, there has been no specific indicator identified (biological or clinical) that can help predict the sensitivity of TC to S-1. In some studies (22,23), thymidylate synthase (TS) is regarded as a predictive biomarker, and the lower levels of TS protein, mRNA, or activity are associated with greater efficacy for S-1. However, its role in TC needs to be clarified further.

Our study indicated that lung metastasis and pleural nodules were more sensitive to S-1 therapy, with an ORR of 38% and 40%, respectively (Table 3). When we examined the previous studies investigating S-1 on TC (8-11), we also found that, in the responding patients, all histology types were squamous cell carcinoma and most of the failure sites were lung metastasis. These findings imply that patients with pulmonary and pleural metastasis might benefit more from S-1 salvage therapy. As is shown in Figure 3, patients who showed response to S-1 had a PFS as long as 22 months, so it is very critical to select potential beneficiaries using predictive biomarkers like TS, or other image clues.

In recent years, target therapy and immunotherapy have become popular research areas in anti-cancer treatment, and some authors have extended this investigation into TC. In Thomas’ report (24), sunitinib produced a 26% response rate in TC, while in Giaccone’s study (25), the response rate after pembrolizumab treatment was 22.5%. Compared with the above results, the efficacy of S-1 appears satisfactory.

In conclusion, S-1 is an effective monotherapy for advanced TC and shows low toxicity. Further prospective multi-institutional studies for this treatment are warranted.

Ethical Statement: The authors are accountable for all aspects of the work in ensuring that questions related to the accuracy or integrity of any part of the work are appropriately investigated and resolved. This study was approved by the Shanghai Chest Hospital Ethics Committee (ID No. KS1920). All patients gave their informed consent before taking part in this study.