Recently, extracorporeal membrane oxygenation (ECMO) has been used instead of cardiopulmonary bypass (CPB) for intraoperative cardiopulmonary support during lung transplantation (LTx). The first application during LTx was described by Ko et al. (1) in 2001. The first larger series of patients was reported by Aigner et al. (2) in 2007. Since then, many lung transplant centers have switched their intraoperative support to the use of ECMO instead of CPB (3-5). Moreover, intraoperative ECMO fills the gap between the preoperative and postoperative ECMO and allows integrated perioperative patient management.

Intraoperative ECMO guarantees hemodynamic stability especially in patients who cannot tolerate single-lung ventilation and for patients who become hemodynamically unstable during the operation. Since 2006, veno-arterial ECMO (V/A-ECMO) has been the standard protocol for complex (lobar transplantation, primary pulmonary hypertension (PPH), pediatric recipients, etc.) or intraoperatively hemodynamically unstable patients in our department. Recently, we prolonged the intraoperative ECMO system into the early postoperative period for the patients whose graft function did not meet criteria at the end of implantation, or in patients with other risk factors.

The intraoperative central (aorta and right atrium) and femoral vessels are the most common for V/A-ECMO; however, these two approaches are fraught with problems. For central cannulation, it has to be established after the beginning of the operation, and it is difficult to establish for left LTx; also, there is a weaning period after the procedure. Additionally, for the patients with lung functions that do meet predefined quality criteria, they need a prolonged intraoperative ECMO system in the early postoperative period. The ECMO system should be reinserted after closing the chest or after a delayed chest closure. For femoral vessel cannulation with the problems such as inadequate upper body perfusion (heart and cerebral), lower extremity ischemia, and insufficient unloading of the left ventricle (LV) (6-8) which may lead to pulmonary edema, the ideal approach for arterial cannulation with either central or peripheral support is still controversial.

We first used the axillary artery with a side graft as a cannulation technique for the inflow of ECMO in bilateral sequential and left LTx, which can avoid the complications associated with different access techniques, the results of a clamshell incision such as a postoperative deformity, chronic pain, and impaired function and inadequate upper body perfusion in left LTx, and be convenient prolonging the intraoperative ECMO system into the early postoperative period

Between November 2016 and July 2017, we established V/A-ECMO for 32 patients undergoing single or double LTx; most of them underwent central cannulation with a 18–20 F arterial cannula (Medtronic) for the aorta and a 30–32 F curved-tip cannula (Medtronic) for the right atrium. Seven of these patients underwent axillary artery cannulation, patient characteristics are summarized in Table 1. We routinely use the heparin-bound ECMO system (Medtronic or Maquet) with a hollow fiber oxygenator, a centrifugal pump (Medtronic or Maquet) and integrated heat exchanger. 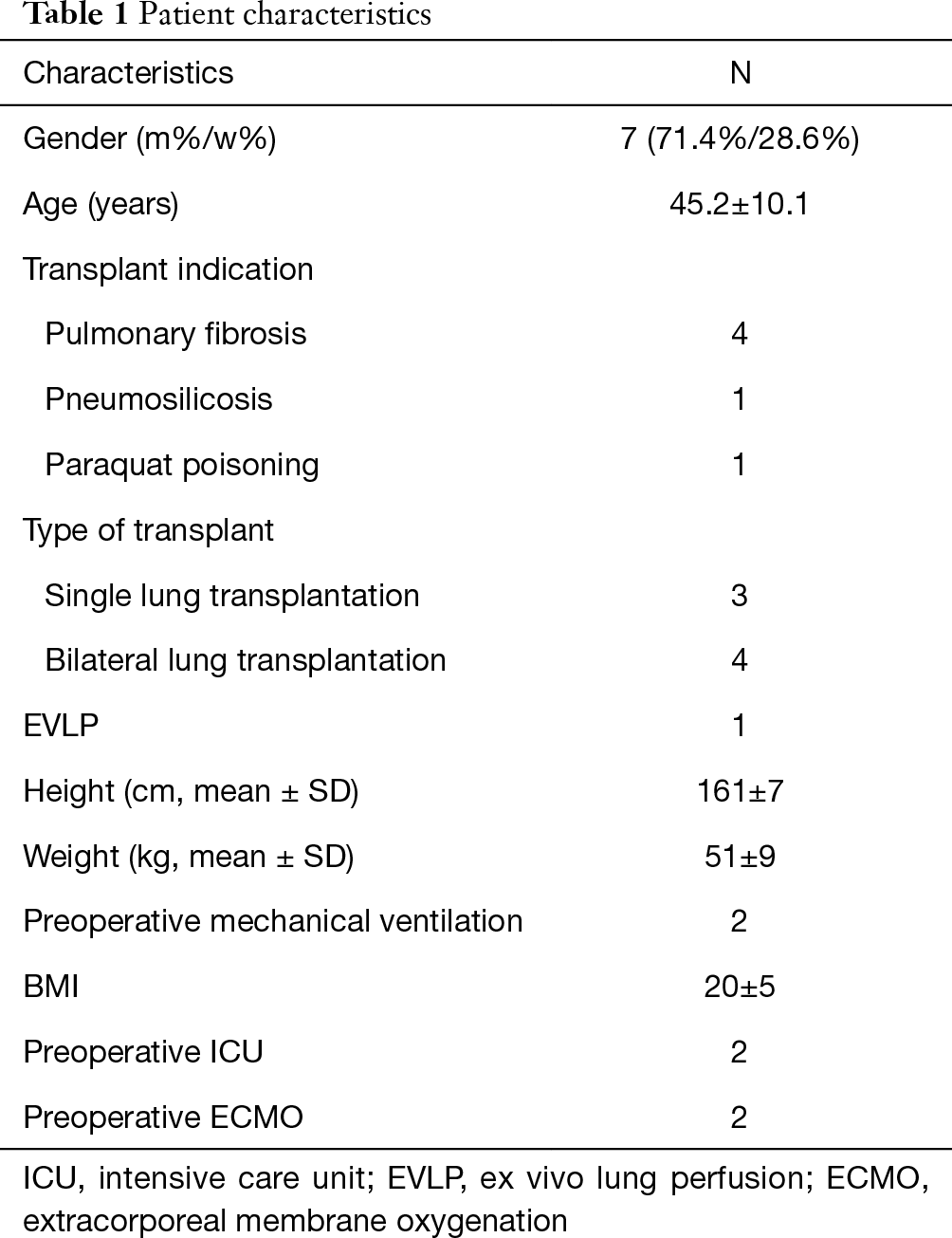 Indication for intraoperative ECMO support included patients with (I) idiopathic pulmonary artery hypertension (IPAH) and severe pulmonary hypertension (PH), (II) lobar LTx, and (III) preoperative ECMO as a bridge to transplantation. The second evaluation was performed after implantation; clamping of the contralateral pulmonary artery was done to check if the freshly implanted lung could support adequate oxygenation and accommodate the entire cardiac output (CO). In those patients with veno-venous ECMO (V/V-ECMO) as a bridge to transplantation with hemodynamic instability during transplantation, additional axillary artery cannulation was performed to establish veno-veno-arterial ECMO (V/V/A-ECMO). During ECMO support, low-dose anticoagulation was established (activated clotting time between 160 and 180 s).

In those suitable for treatment options, the choice was made according to the preference of the patient and family. Informed consent was obtained from each patient or the legal guardian before either procedure. The study protocol was approved by the Ethics Committee of The First Affiliated Hospital of Guangzhou Medical University (Number of approval: GYFYY-2016-13).

The distal right axillary artery is exposed through a 3- to 4-cm subclavicular incision (Figure 1). The axillary artery is slung proximally and distally before arteriotomy, and then an 8-mm polyethylene terephthalate (Dacron) graft is sutured in an “end-to-side” fashion using 6-0 polypropylene suture (Figure 2). A 6×10 connector is inserted into the graft, and then fixed with silk. Complete hemostasis and sutured skin incision is achieved. 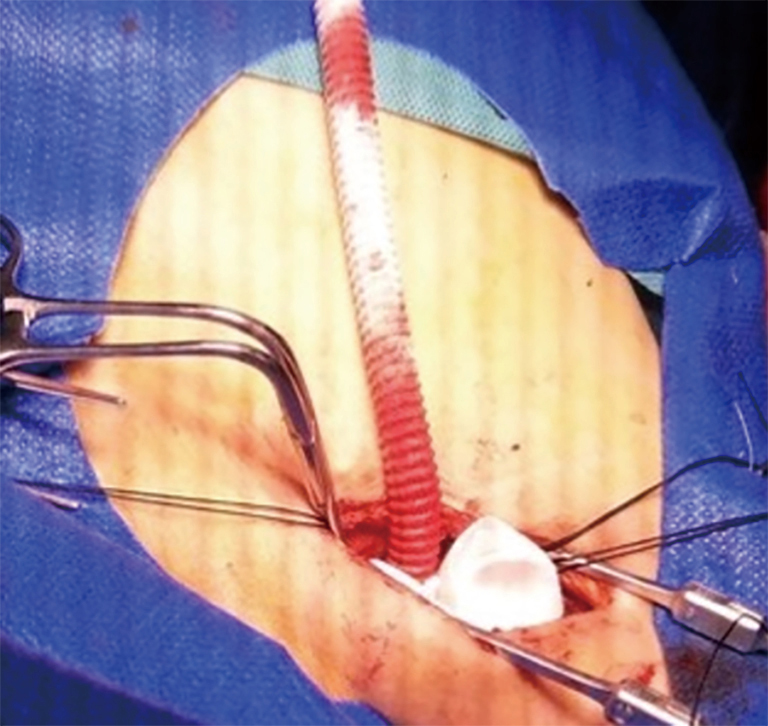 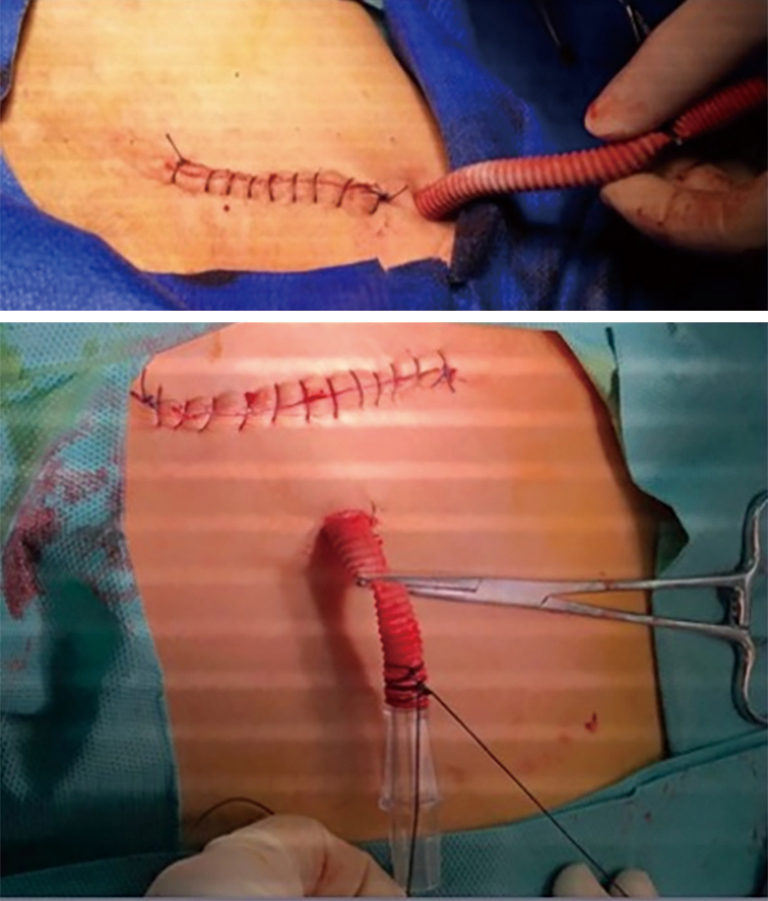 Femoral venous cannulation is usually carried out percutaneously (Figure 3). Transthoracic or transesophageal echocardiography is used to ensure that the venous cannulas are positioned just above the inferior vena cava-right atrial junction. We then attach the ECMO circuit to the cannula to avoid air, and then initiate ECMO. After establishing the ECMO system, ECMO flow is set to 50% of the predicted CO and adapted according to the hemodynamic and gas exchange demands. 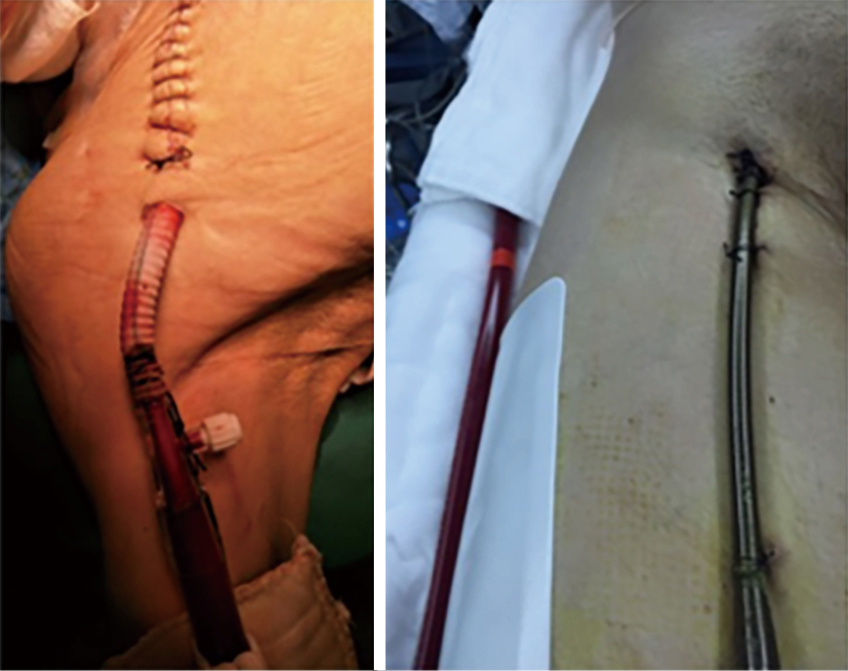 Between November 2016 and July 2017, 88 patients underwent LTx at our institution. Among these patients, 32 (36.4%) patients required intraoperative ECMO support, 7 (21.9%) of these patients underwent axillary artery cannulation. Among these 7 patients, 1 patient was switched from femoro-femoral V/A-ECMO to axillary artery-femoral V/A-ECMO because of inadequate upper body perfusion (upper limb heart and cerebral), 2 patients had V/V-ECMO as a bridge to transplantation; the same ECMO system was kept for intraoperative support, and an additional subclavian axillary cannula was inserted for arterial inflow to establish V/V/A-ECMO. Axillary artery-femoral V/A-ECMO was used in the remaining 4 patients (Table 2).

None of these patients died, without experienced arteriovenous thrombosis and embolization, distal limb ischemia, and inadequate upper body perfusion. Three patients with “prolonged ECMO” and 2 patients with graft function did not meet defined quality criteria at the end of implantation. ECMO was switched prophylactically from axillary artery-percutaneous femoral vein V/A-ECMO to internal jugular and femoral vein V/V-ECMO. One patient with PPH was transferred to the ICU with the same intraoperative axillary artery-percutaneous femoral vein cannulation V/A-ECMO system.

ECMO-related complications were recorded throughout the study period. One patient had an intraoperative hemorrhaging of about 150 mL from the connector, there was no other complications related to the subclavian cannulation in the intraoperative ECMO. One patient on prolonged ECMO(V/V-ECMO) experienced minor cerebral ischemic events. Neither of them had significant neurological impairment (Table 2).

In most LTx institutions, intraoperative cardiopulmonary support is reserved for patients who cannot tolerate single-lung ventilation, or for patients who are hemodynamically unstable during the procedure. ECMO has completely replaced CPB in recent years since several study groups have shown lower rates of complications, and improved survival (9,10). In our department, V/A-ECMO has been the standard intraoperative mechanical support for complex or intraoperatively unstable patients for more than 12 years. Central and femoral vessel cannulation are performed in most of our patients.

With central V/A-ECMO, for patients with lung functions that do not meet predefined quality criteria or other risk factors, they need prolonging of the intraoperative ECMO system into the early postoperative period; the ECMO system should be inserted after closing the chest or after a delayed chest closure.

Femoral vessel access is the most commonly used due to it being quick and straightforward. In the setting of an LV dysfunction, surgeons must be wary of the increased afterload of the heart when exposed to the retrograde flow of peripheral cannulation, resulting in elevated LV cavity pressure, which can also lead to pulmonary venous hypertension, pulmonary vascular injury, and pulmonary edema (11-13). To avoid these complications, the LV requires decompression. Traditional methods for LV decompression during V/A-ECMO include intra-aortic balloon pumps (IABP) (14,15), percutaneous atrial septostomy, central ECMO cannulation (16), and using Impella for LV decompression (17). During V/A-ECMO, IABP is often unable to unload the LV adequately. Left atrial septostomy can decrease LV distension, but can not prevent thrombus formation within the LV cavity. Central ECMO cannulation is sufficient but requires resternotomy or rethoracotomy for placement. Sibbald et al. reported several complications with the Impella, such as hemolysis, aortic valve insufficiency, and pump thrombosis (18). Percutaneous cannulation of the femoral vessel allows for rapid initiation of support; however, the femoral arterial cannulae can be partially or totally occlusive, and perhaps lead to distal limb ischemia (6,8). To limit vascular limb complications, alternative cannulation sites have been considered. Few reports are available describing the role of the subclavian or axillary artery (19). Axillary artery cannulation is a viable alternative method for preserving cardiac blood flow and limiting the risks of femoral artery cannulation. Other benefits of axillary artery cannulation include support with the antegrade flow while avoiding the need for sternotomy and direct aortic cannulation, which are frequently required for adult central ECMO perfusion.

In 2016, we introduced axillary artery- percutaneous femoral vein cannulation V/A ECMO and prolonging the use of intraoperative ECMO into the early postoperative period in patients with high-risk factors or an unsatisfactory graft at the end of implantation. Since then, we have switched central and femoro-femoral V/A ECMO to axillary artery-percutaneous femoral V/A ECMO in bilateral sequential LTx and left single LTx.

The development of PGD is a multifactorial process. It may or may not be related to the use of a marginal donor lung, which may have a functional impairment. The ischemic injury aggravates this during procurement and warm ischemia during implantation. It has been well-demonstrated in the literature that ex vivo lung perfusion (EVLP) allows surgeons to identify and exclude unacceptable organs for transplantation (20), and to repair and improve already damaged lungs (21). The two essential methods in that regard are EVLP and ECMO, and thus we have gradually introduced the concepts into our clinical practice by using EVLP whenever indicated, expanding the indication for intraoperative ECMO in high-risk patients, and prolonging ECMO into the postoperative period.

There is no consensus which ECMO mode is superior for postoperative prolongation (22). In the early stages, we used V/V-ECMO support by combining internal jugular and femoral vein cannulation or V/A ECMO cannulation through the femoral artery and femoral vein. VV-ECMO provides sufficient capacity for oxygenation and decarboxylation, which facilitates lung protective ventilation strategies (23), and it is less invasive and has a lower risk of vascular complications. However, it cannot bypass blood flow from the pulmonary capillary bed, which is a unique feature of VA-ECMO. Since only VA-ECMO can reduce the blood flow through the lungs, we use the axillary artery cannulation technique which can avoid the complications associated with femoral vessel access techniques and be helpful for prolonging the intraoperative ECMO into the early postoperative period; thus, we have recently switched V/V-ECMO to V/A-ECMO in the postoperative stage.

However, axillary artery access is not practical in emergency circumstances because they require open surgery. In thoracic organ transplantation, use of the axillary artery with an end-to-side graft is the preferred method for V/A-ECMO in bilateral sequential LTx and left single LTx, as without the need for the “clamshell” incision in bilateral sequential LTx, complications of “clamshell” incision and the those associated with femoral artery cannulation, can be avoided. Our experience suggests that axillary artery cannulation can sufficiently decompress the LV which can reduce pulmonary edema, avoid upper limb and brain hypoperfusion, along with hypoxemia in left single LTx with femoral vessel access due to inadequate upper body perfusion.

Our opinion is that axillary artery cannulation provides a safe and effective method for V/A-ECMO support. Furthermore, in this technique, decannulation is a straightforward procedure; it only needs to ligate the graft either by using a vascular stapler or by oversewing the graft.

Ethical Statement: The authors are accountable for all aspects of the work in ensuring that questions related to the accuracy or integrity of any part of the work are appropriately investigated and resolved. Informed consent was obtained from each patient or the legal guardian before either procedure. The study protocol was approved by the Ethics Committee of The First Affiliated Hospital of Guangzhou Medical University (Number of approval: GYFYY-2016-13).