Intrathoracic esophagogastric anastomosis is used for most radical resections of middle or lower esophageal cancer. However, total laparoscopic and thoracoscopic esophagectomy with intrathoracic anastomosis is associated with technical difficulty and complexity. A total of 62 patients with middle or lower esophageal cancer were treated with this approach between March 2012 and August 2013. This paper describes the total laparoscopic and thoracoscopic Ivor-Lewis esophagectomy, focusing on the surgical procedures and the key technical details of thoracoscopic intrathoracic anastomosis using a circular stapler (Johnson and Johnson).

Subjects totally 62 patients were enrolled, including 46 males and 16 females, with a mean age of 61±12 years (range, 42-72 years). Progressive dysphagia was the major symptom for 0.5-6 months, with a mean duration of 2.5±2 months. The preoperative barium swallow study was followed by contrast-enhanced computed tomography of the chest, and upper endoscopy and biopsy. The findings revealed a middle or lower esophageal carcinoma occurring as a single tumor in all subjects. The lesions were 2-5 cm in length, with a mean length of 3±1.2 cm. No obvious outward invasion was detected (stage T3 or lower). No significantly enlarged lymph node was detected. CT scan of the head, bone scan and abdominal ultrasonography revealed no distal metastases. Cardiopulmonary evaluation showed no apparent surgical contraindications. Postoperative pathology included squamous carcinoma in 57 cases and adenocarcinoma in 5 cases. Tumors were staged as T1N0M0 in 27 cases, T2N0M0 in 29 cases, T3N0M0 in 5 cases and T3N1M0 in 1 case (UICC esophageal carcinoma pathological stage, 2009).

Patients were placed in a supine position, and underwent laparoscopy-assisted abdominal surgery with five abdominal ports. The 11-mm incision besides the umbilicus was used as the observation port, and the other four ports were positioned at the incisions in the subcostal region of the left (5-mm port) and right midclavicular lines (5-mm port), and the incisions 3 cm superior to the umbilicus in the left (5-mm port) and right parasternal lines (11-mm port). The surgeon stood on the right side of the patient (Figure 1). 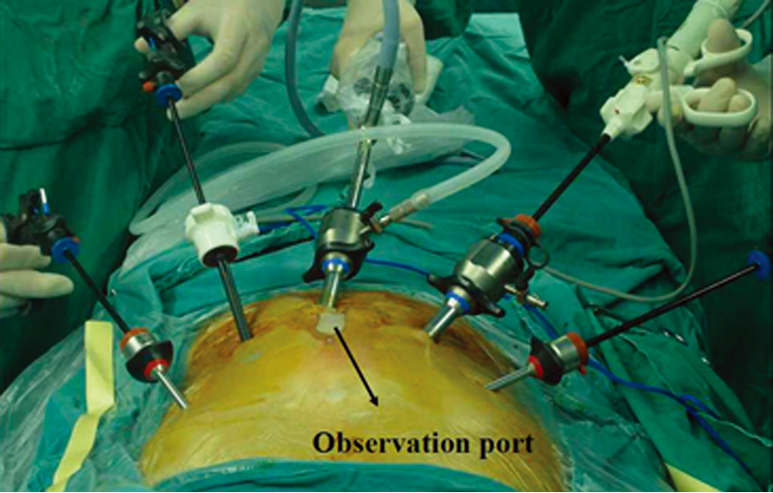 Figure 1 Abdominal incision with five abdominal ports, the surgeon stood on the right side of the patient. 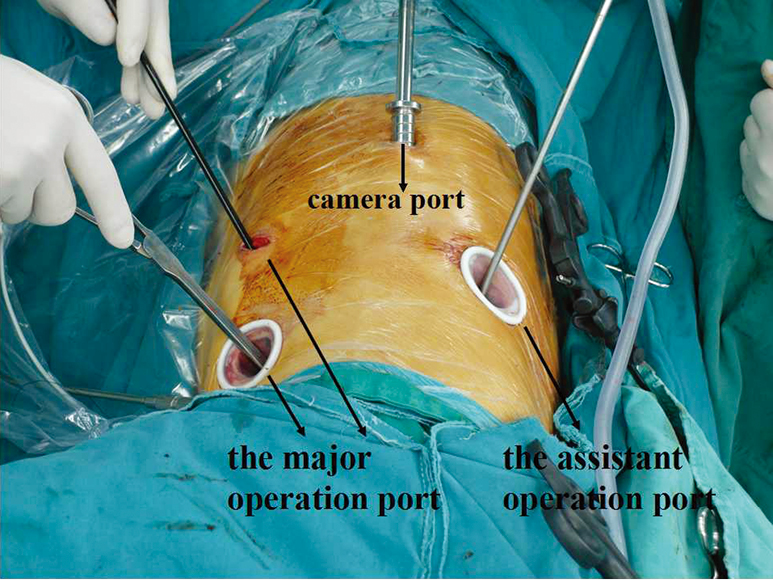 Figure 2 Thoracic incision with four thoracic ports, the surgeon stood on the abdominal side of the patient. 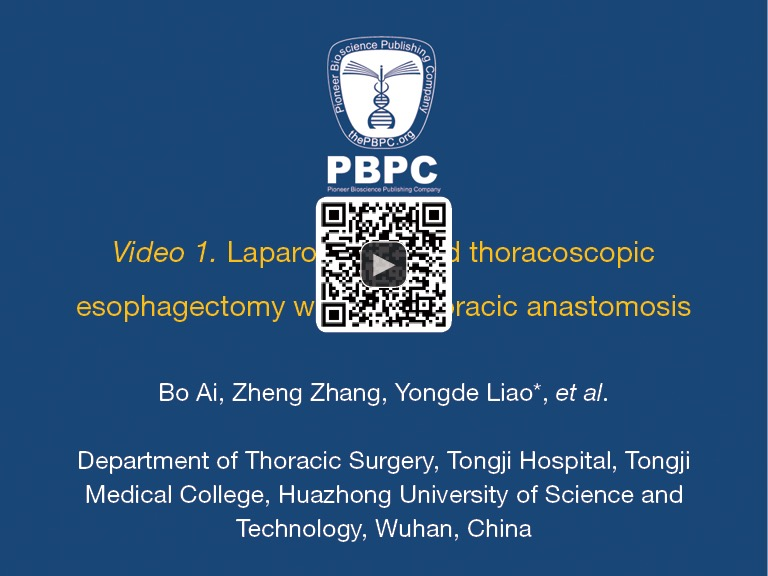 Laparoscopic mobilization of the stomach

The stomach was routinely mobilized, the abdominal lymph node dissected, and the pedicled omental flap was reserved at the site close to the fundus of the stomach. The greater omentum was mobilized towards the margin of the colon to the splenogastric ligament, and then mobilized towards the margin of the stomach. A pedicled omental flap about 10 cm long and 5 cm wide was reserved to embed the anastomosis. A median abdominal incision of about 5 cm in length was cut below xiphoid, and a gastric conduit of about 3.5 cm in diameter was created using a linear stapler (Johnson and Johnson) outside the abdominal cavity. The tip of the gastric conduit was temporarily attached to the surgical specimen with interrupted sutures. A jejunostomy was created about 30 cm distal to the ligament of Treitz.

Thoracoscopic mobilization of thoracic segment of esophagus and tumor

The esophagus was mobilized at the site 4 cm superior to the azygos vein with a cautery hook and ultrasonic scalpel in a bottom-up approach. The azygos vein was ligated using Hem-o-lok clip and divided by ultrasonic scalpel. The pleura surrounding the esophagus at the anastomotic stoma were reserved for subsequent use. Thoracic lymph nodes were systematically dissected, including the left and right recurrent laryngeal nerve chain lymph nodes.

Purse-string suture and insertion of the stapler anvil

The endoscopic surgeries were successfully performed without conversion to laparotomy or thoracotomy. The mean overall operation time was 260±35 min (range, 250-320 min), the mean thoracoscopic operation time was 155±20 min (range, 110-170 min), and the mean laparoscopic operation time was 115±21 min (range, 90-140 min). The mean estimated blood loss was 210±32 mL (range, 180-270 mL). The mean number of nodes harvested from every patient was 23±5 (range, 11-29). No operative mortality or severe complications occurred, including anastomotic stricture, respiratory failure, trachyphonia or chylothorax. Anastomotic leak was observed in one case (1/62, 1.6%), which was cured with conservative treatment. The patients commenced ambulation 2 days post-operation, with a mild sensation of chest pain. The mean length of hospital stay was 11±2 days (range, 10-14 days; except one case with anastomotic leak). The cases were followed up for 1-17 months, with normal diet. No death or recurrence was observed.

Minimally invasive surgery offers valuable alternatives to enhance traditional open surgery. Total laparoscopic and thoracoscopic esophagectomy with intrathoracic anastomosis overcomes the bottlenecks associated with endoscopic surgery of esophageal cancer, which facilitates the real MIE. It is reported that trans-orally inserted anvil (OrVil) can be used for intrathoracic gastroesophageal anastomosis (9-11). However, OrVil was too expensive to be popular. The transoral insertion of the anvil increases the probability of thoracic infection. Compared with the OrVil approach, the technique reported here is safe, feasible and user-friendly. Total thoracoscopic intrathoracic anastomosis can be performed with a circular stapler (Johnson and Johnson).