Myocardial infarction (MI) as acute manifestation of coronary artery disease (CAD) is one of the leading causes of death worldwide (1). As “time is muscle”, ongoing ischemia remains a major pitfall in this pathology, causing cardiac cell death with life-threatening arrhythmias and/or loss of contractility. Therefore, the natural main therapy goal in MI is to reestablish coronary blood flow as soon as possible. However, in non-ST-elevation myocardial infarction (NSTEMI), where ischemia is considered less critical than in ST-elevation myocardial infarction (STEMI), patient management has been traditionally less aggressive regarding time point of revascularization. Furthermore, it has been claimed that delaying coronary artery bypass grafting (CABG) in NSTEMI contributes to decrease the perioperative risk (2-4). Nevertheless recently, long-term outcomes of NSTEMI patients have been investigated in function of their time to intervention, showing both risk and mortality reduction in early revascularized patients (5).

Most of revascularizations are performed by percutaneous coronary interventions (PCI) (6). Indication for CABG is: unsuccessful or unsuitable PCI, cardiogenic shock, combined surgery or severe multivessel disease (7-9). Different studies have shown that CABG in MI can be performed in high-risk patients with good clinical results (10-17). But even if recent studies have shown good results in early CABG (5), clinical experience in this field remains limited and further studies are needed to evaluate safety and potential benefits of early CABG in NSTEMI patients.

We performed a prospective observational study including all patients that underwent eGABG with NSTEMI at Hannover Medical School between 2014 and 2016. Patients that required concomitant cardiac surgery were excluded. A total of 217 Patients were enrolled and divided into two groups according to the time lapse between onset of symptoms and revascularization: Group A (>72 h) and Group B (<72 h). Heart team met to elucidate on the best choice of revascularization in all cases, according the advice of clinical practice guidelines. All patients were operated as previously described (10). Baseline characteristics are presented in Table 1. Maximum follow-up was 6 months after operation. The investigation conforms to the principles outlined in the Declaration of Helsinki. The local institutional review board approved the study. Postoperative medical care was managed according to usual practice: all patients were treated with one of the antiplatelet agents as well as statins additionally to the other cardiovascular medication needed. 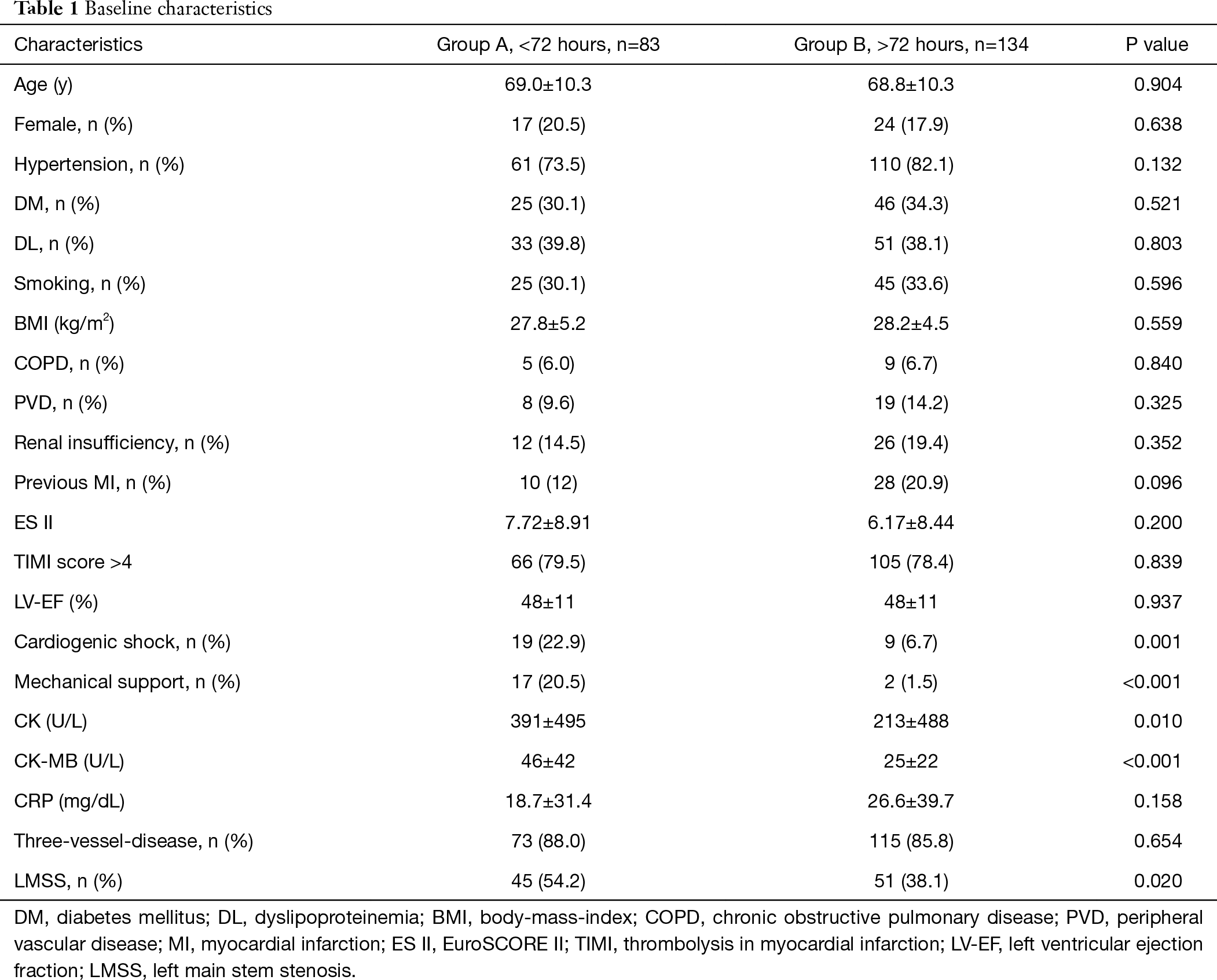 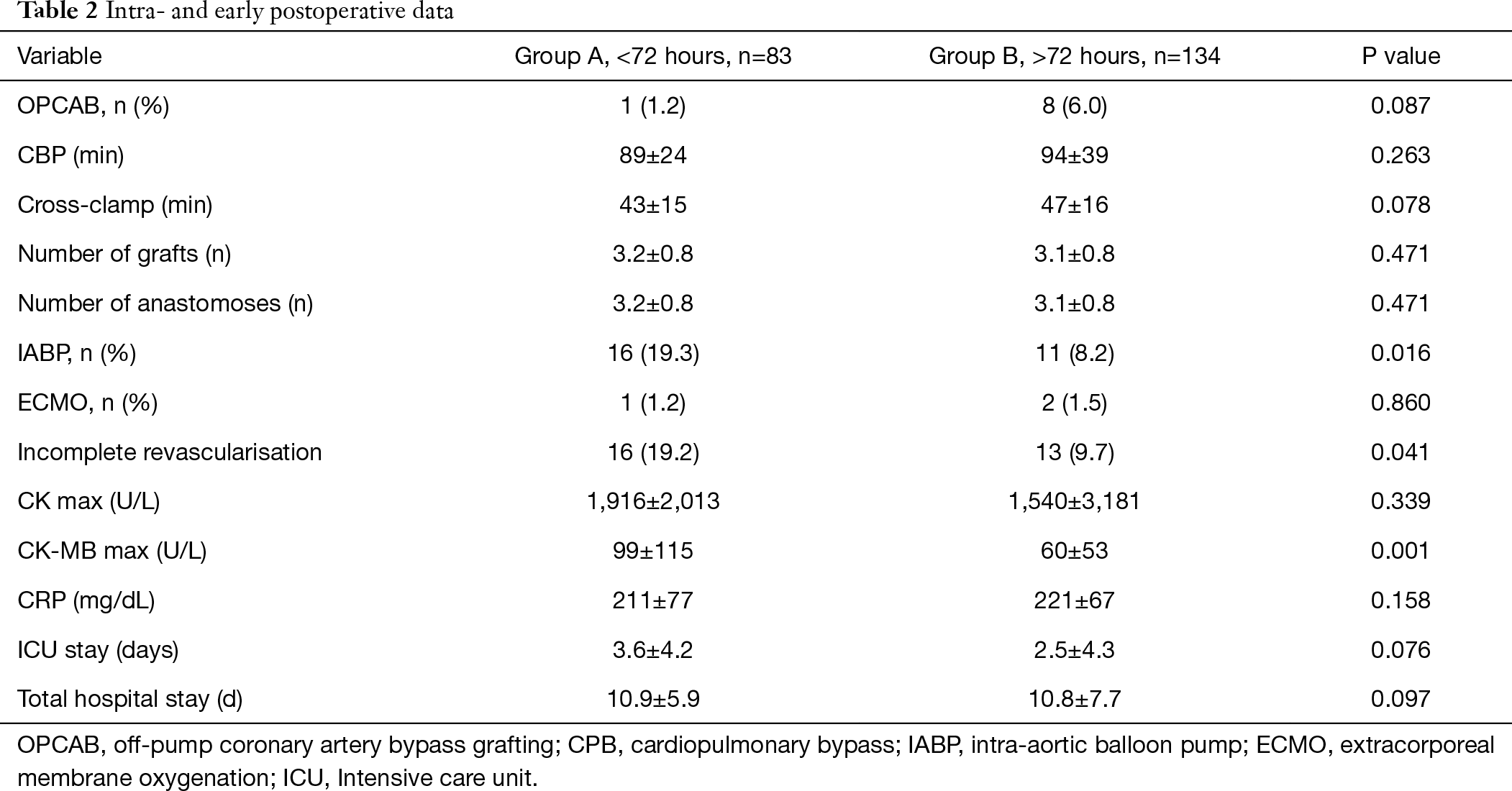 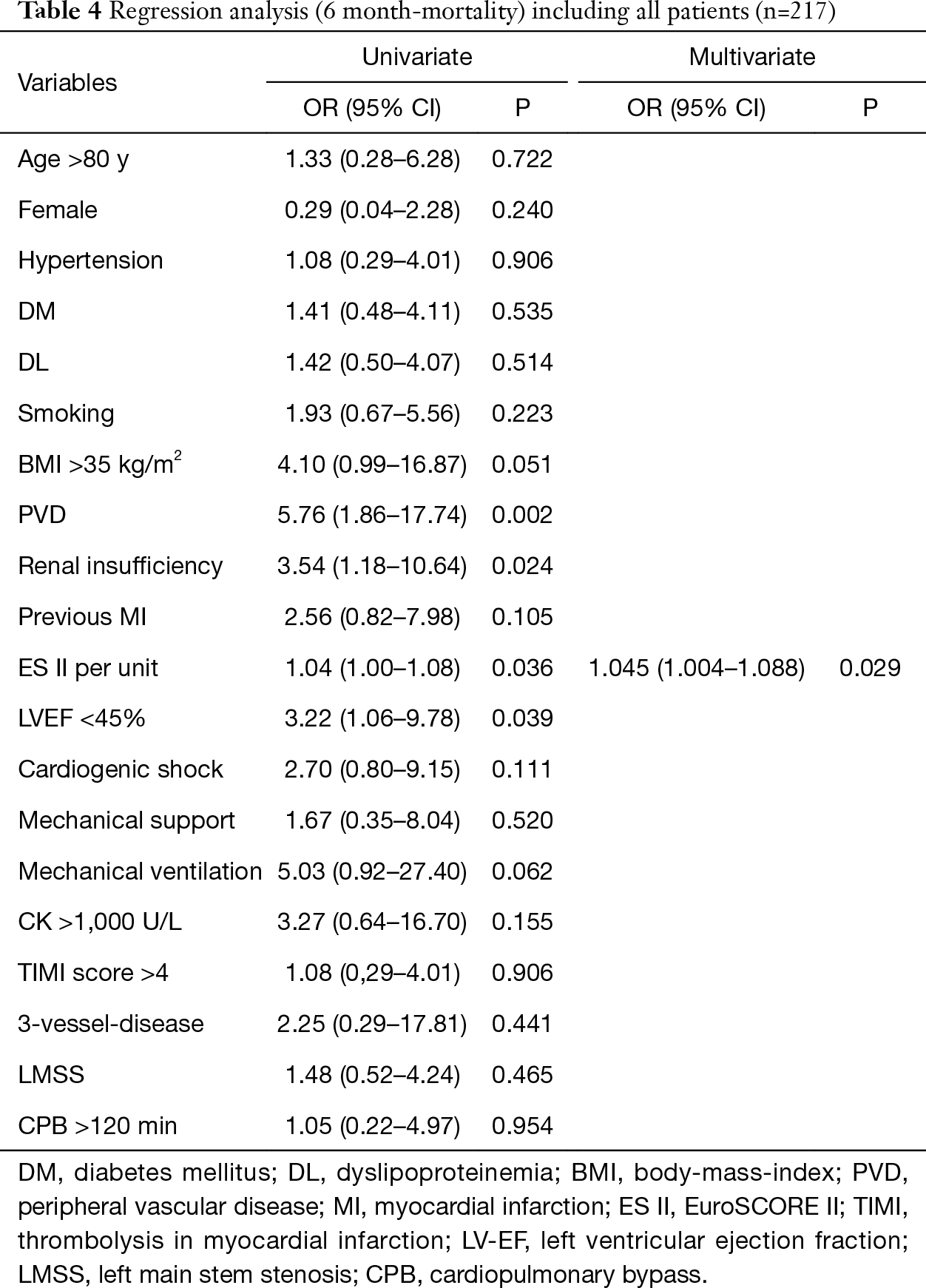 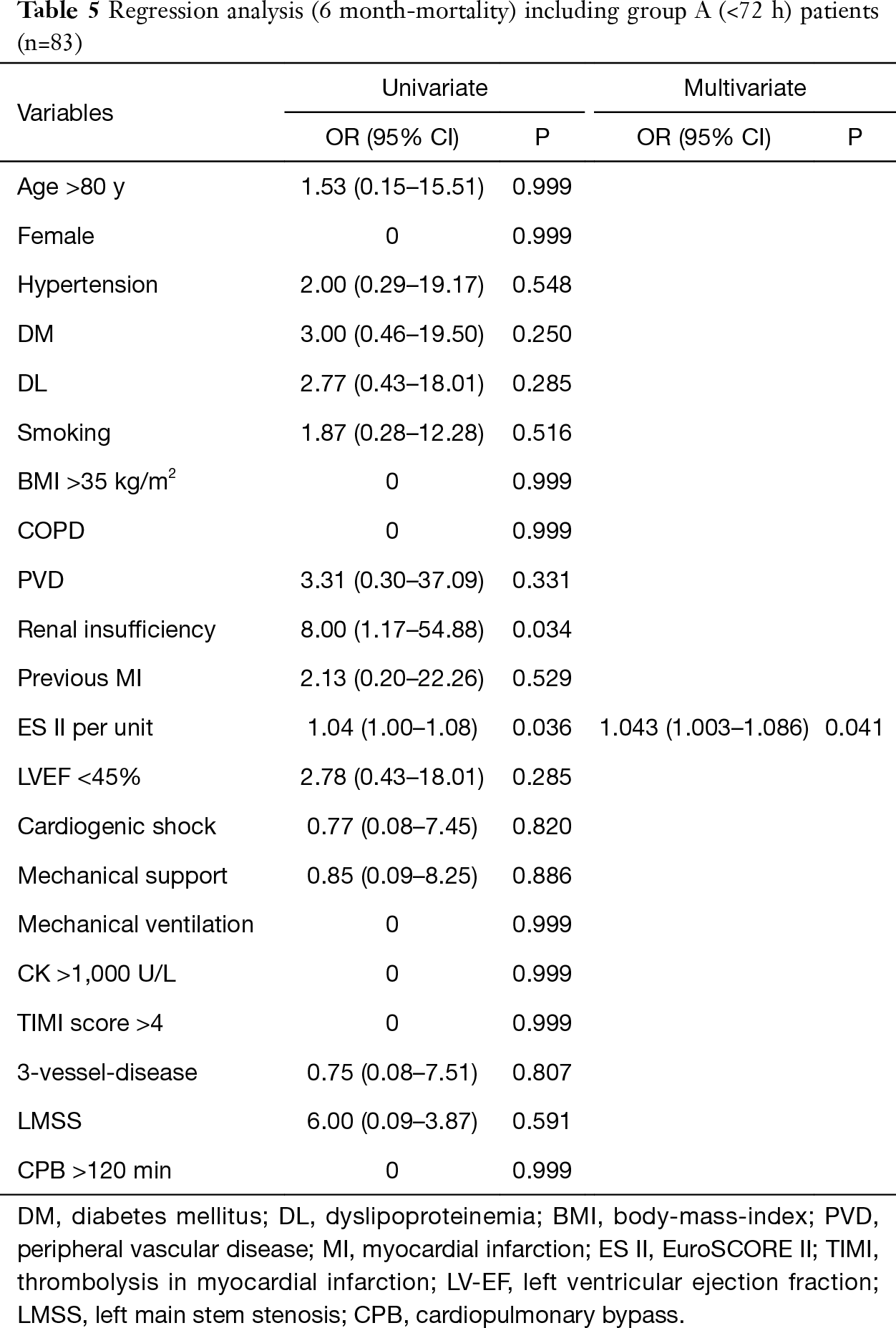 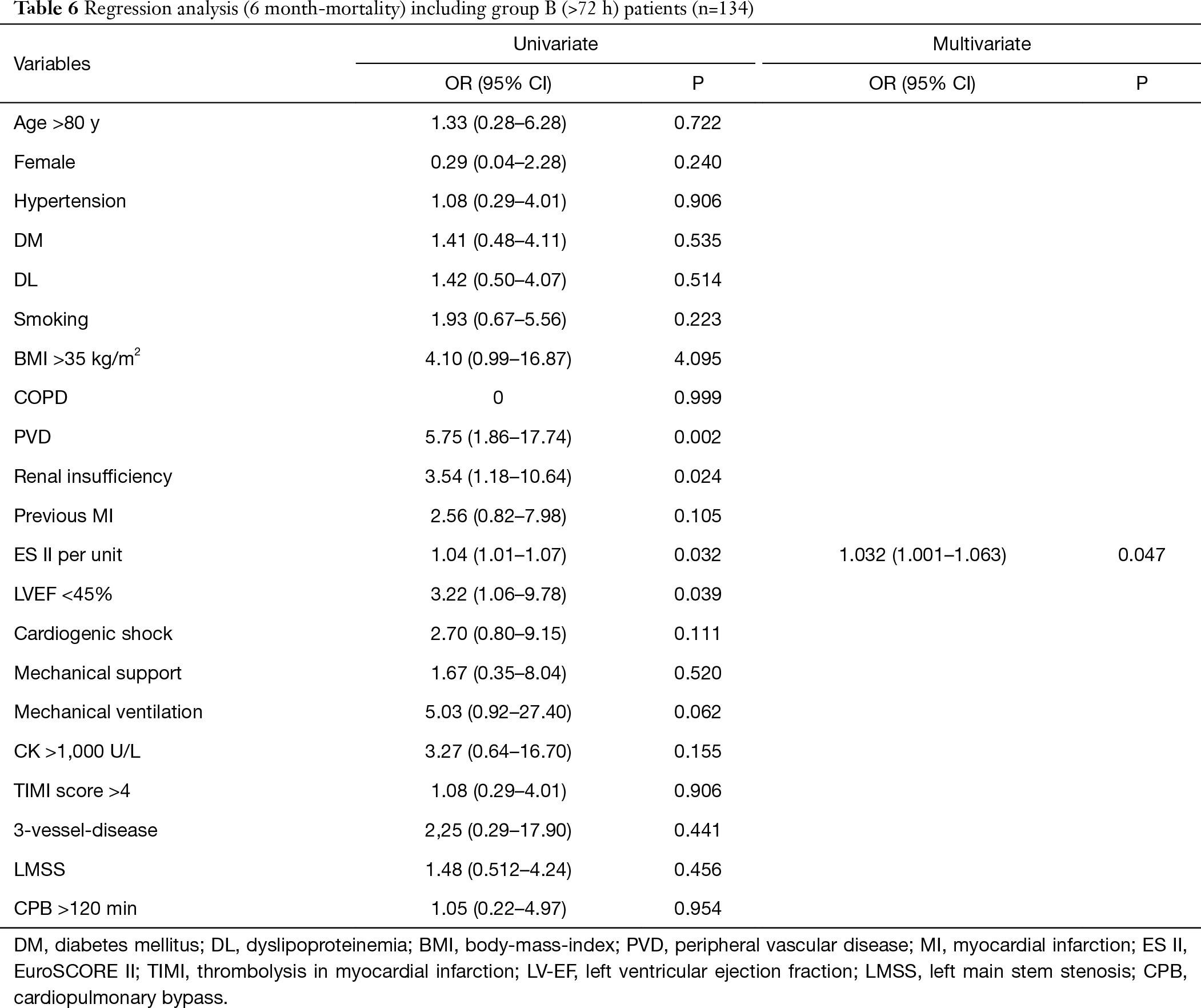 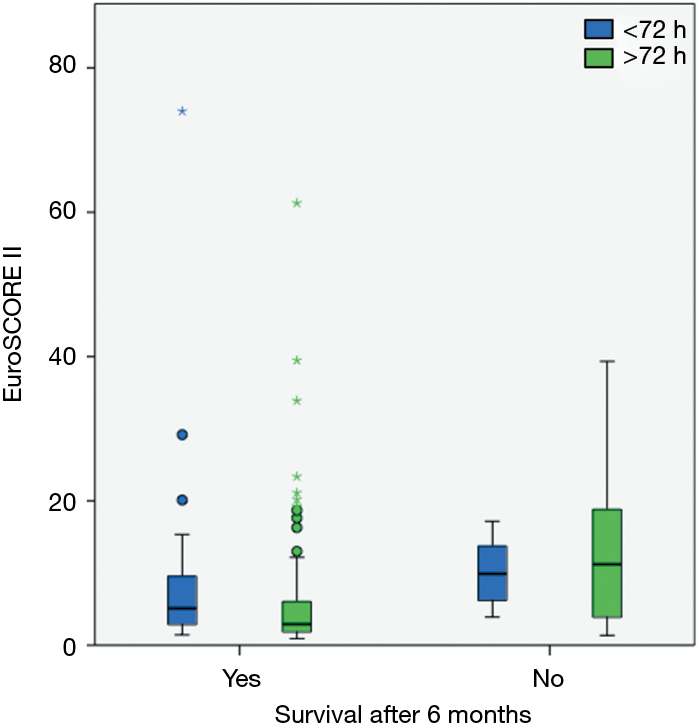 PCI remains the gold standard for the majority of revascularizations in MI since it is fast, effective and broadly available (6,7,18). However, when it is feasible, revascularization mode should be based on the severity and distribution of CAD (7). This rule also applies for patients with NSTEMI. Thus, in multivessel disease, patients would take additional benefit from CABG, especially regarding long-term results (19,20). Concerning the right time point of revascularization, there is still an ongoing discussion. However, new recommendations for NSTEMI patients make this decisions dependent on the individual patient’s risk (7). Moreover, early surgery may be beneficial to reduce ischemic time of patients and prevent clinical deterioration (21).

Still there are several studies that show CABG soon after acute MI is associated with high operative mortality and morbidity (22). Surgical difficulties encountered during CABG in the early phase of acute MI due to edema, induration and fragility of myocardial tissue may partly explain this finding. In this setting, cardiac trauma with abrasive injury can occur even with gentle handling, and the visualization of target vessel and arteriotomy can be challenging, making the precision of coronary anastomoses even more demanding (23). Another strategy to reduce perioperative risk is the discontinuation of antiplatelet therapy.

In the present study we compared NSTEMI patients that underwent CABG following NSTEMI at our institution. Patients were divided into two groups according to time point of revascularization: group A <72 h, group B >72 h. Our analysis unveiled that baseline-characteristics of group A patients showed a tendency to higher level of illness with significant higher incidences of preoperative cardiogenic shock, left main stem stenosis and higher preoperative levels of CK and CK-MB. In other words, most critical cases were operated earlier. This is also reflected by the preoperative data: Mechanical support was needed in 20.5% of group A patients vs. 1.5% of group B patients. Despite the increased severity of patient mortality and major events in the study period, postoperative outcomes did not differ from late surgery group. Moreover, several of our patients had clinical deterioration days after the initial event needing an emergency surgery. On the other hand, we observed a higher percentage of incomplete revascularization in the group of early surgery that could affect the long-term prognosis in this group of patients; however, increased monitoring is necessary to confirm this.

Although EuroSCORE II models have shown poor calibration with comparatively poor discrimination for emergency cardiac surgery (24), in our study, it predicted successfully mortality in our patients and was not significantly affected by the time point when surgery was performed.

This study has the inherent limitations of observational registries, because the timing of referral for both cardiac catheterization and CABG was left to the discretion of the treating physician. Furthermore, there might have been a survivor bias favoring the late CABG group, because patients who died early could not undergo late CABG. This limitation, however, only strengthens our finding of no apparent benefit associated to routine CABG delay. Although we attempted to account for these factors through comprehensive multivariable analyses, it is possible that other unmeasured factors could also have contributed to CABG timing and also influenced outcomes. This study only performed follow-up through hospital discharge, and additional study is needed to correlate findings with longer-term outcomes up to 6 months and beyond. As well, a broader comparison group including the patient treated percutaneously also at different time points to find out which timing is optimal for both surgical and interventional strategies.

The ideal time point of CABG in the setting of acute MI remains controversial. Although short MI-to-CABG intervals are associated to more challenging surgery, it has to be emphasized that long intervals place post-infarct patients at risk for further adverse cardiac events, which could be fatal. The timing of surgery should consider a balance between the risks and the benefits and focus on multi-organ optimization of the patient.

Ethical Statement: The authors are accountable for all aspects of the work in ensuring that questions related to the accuracy or integrity of any part of the work are appropriately investigated and resolved. The local institutional review board approved the study (No. 1638-2012).