Transcatheter aortic valve replacement (TAVR) has become a valid strategy for patients with severe aortic valve stenosis (1,2). The transfemoral (TF) approach is considered as the access route of choice for TAVR as it is associated with superb outcomes (3). When suboptimal iliofemoral vessels preclude a TF approach, other access routes are sought for alternatives, among which transaxillary (TAx) approach has shown promise as a preferred option (4-6). However, the safety and efficacy of TAx-TAVR remain to be elucidated.

A marked reduction in the use of alternative access has been achieved in recent years with improvement in the delivery devices. Despite the advances, about 10–15% of TAVR cases are currently performed using alternative access, and the choice of alternative access route remains controversial (7). Compared to transaortic or transapical access route, TAx-TAVR is less invasive and associated with improved recovery (8-10). As a major advantage, TAx-TAVR involves no thoracotomy/sternotomy; thus, it could be done either percutaneously or with a surgical cut-down with local anesthesia and under sedation (11). Therefore, expedited recovery can be expected.

The Choice Trial has demonstrated that the outcomes of TAVR are device-specific (12). The variable outcomes of self-expandable valves vs. balloon-expandable valves need to be taken into account when a meta-analysis is conducted, as valve type will have an influence on the results. The self-expandable CoreValve (Medtronic, Minneapolis, MN, USA) is the most frequently applied transcatheter heart valve (THV) for TAx-TAVR (8-10). While the outcomes of TAVR are device-specific, the majority of previous studies contained unstratified data with regard to devices used (13,14). We performed a meta-analysis of the studies comparing the TF-TAVR and TAx-TAVR using the CoreValve device to avoid device-related bias.

Studies were considered eligible if they are (I) randomized controlled trials or observational studies, (II) at least 10 patients are included in the studies, (III) patient demographics are reported, (IV) sufficient data of outcomes for both approaches, (V) studies include data related to the use of CoreValves or the data on CoreValves are separately reported. Studies were excluded if there is insufficient or inadequate data for analysis, if the study is a case report or review, and if there is duplicate or overlapping data including the studies from the same institutions and contributed by the authors who participated in other studies selected for this meta-analysis. The literature search, systemic review, and meta-analysis were conducted following published guidance (15,16). Discrepancies between reviewers were resolved by discussion until a consensus was reached. Study Quality Assessment was performed following the criteria recommended by the University of Oxford Centre for Evidence Based Medicine (15,17).

Continuous variables are presented as means ± standard deviation (SD), and categoric variables are presented as percentages. Median is considered as mean, and SD is calculated by dividing the interquartile range by 1.35. The Cochrane Collaboration Review Manager 5.3 software was used for meta-analysis. For forest plots, the odds ratio (OR) was used as a summary statistic, and 95% confidence intervals based on Mantel-Haenszel χ2 were estimated to compare outcomes. Both fixed- and random-effect models were tested. The results using the random-effects model were presented. The heterogeneity of outcomes between the studies was determined using the χ2 test. I2 statistic and degree of freedom (df) were calculated to estimate the variation across studies. Statistical significance for hypothesis testing was set at the 0.05 level. Publication bias was analyzed by funnel plots.

Five studies met the inclusion criteria for meta-analysis (Figure 1), and an overview of these studies is summarized in Table 1. All five studies contain data comparing TF-TAVR and TAx-TAVR with the CoreValve device, although in two studies the authors also discuss other valve types such as the Edwards SAPIEN valve (9,18). For the purposes of this study, only the demographic and outcome data pertinent to the use of CoreValve devices were extracted for analysis. Of the included studies, no randomized controlled trials were identified. Four of the five studies were from multicenter prospective data registries (4,6,9,18). Two studies performed propensity-score matching (4,6). A quality assessment of each study was performed (Table 2). These studies are considered as high quality and acceptable for meta-analysis, albeit the TAx group has fewer patients in the studies without propensity-score matching (5,9,18). 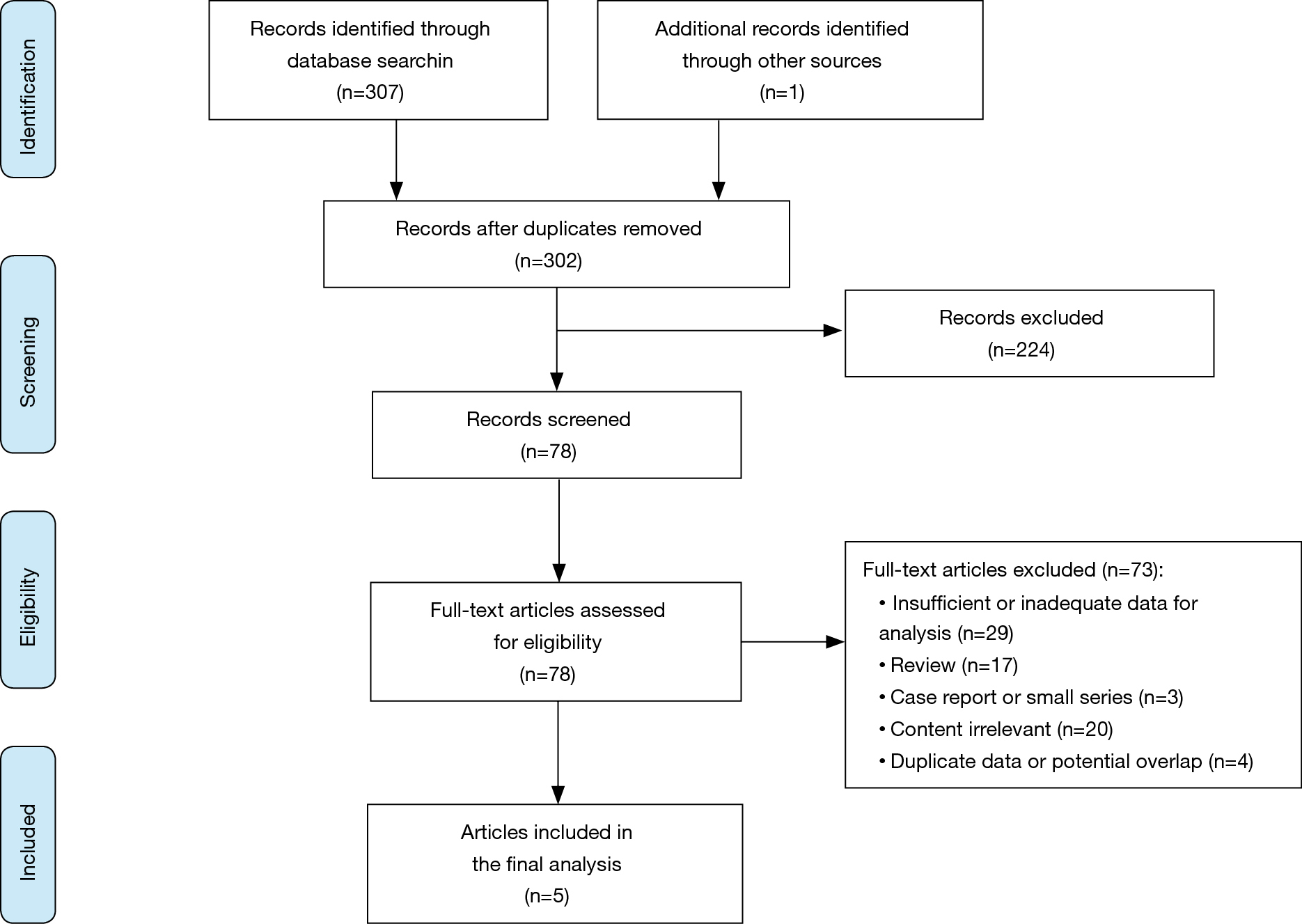 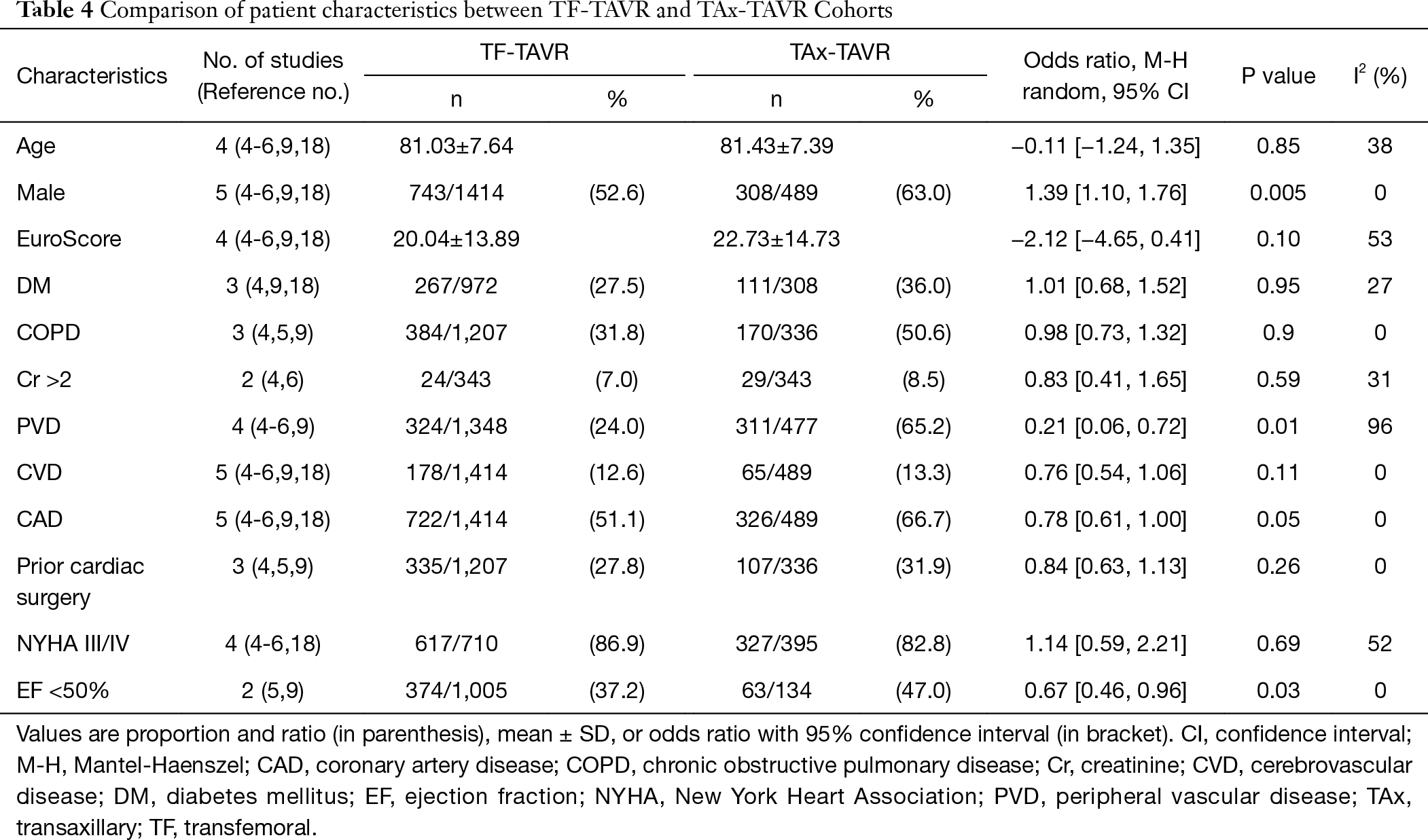 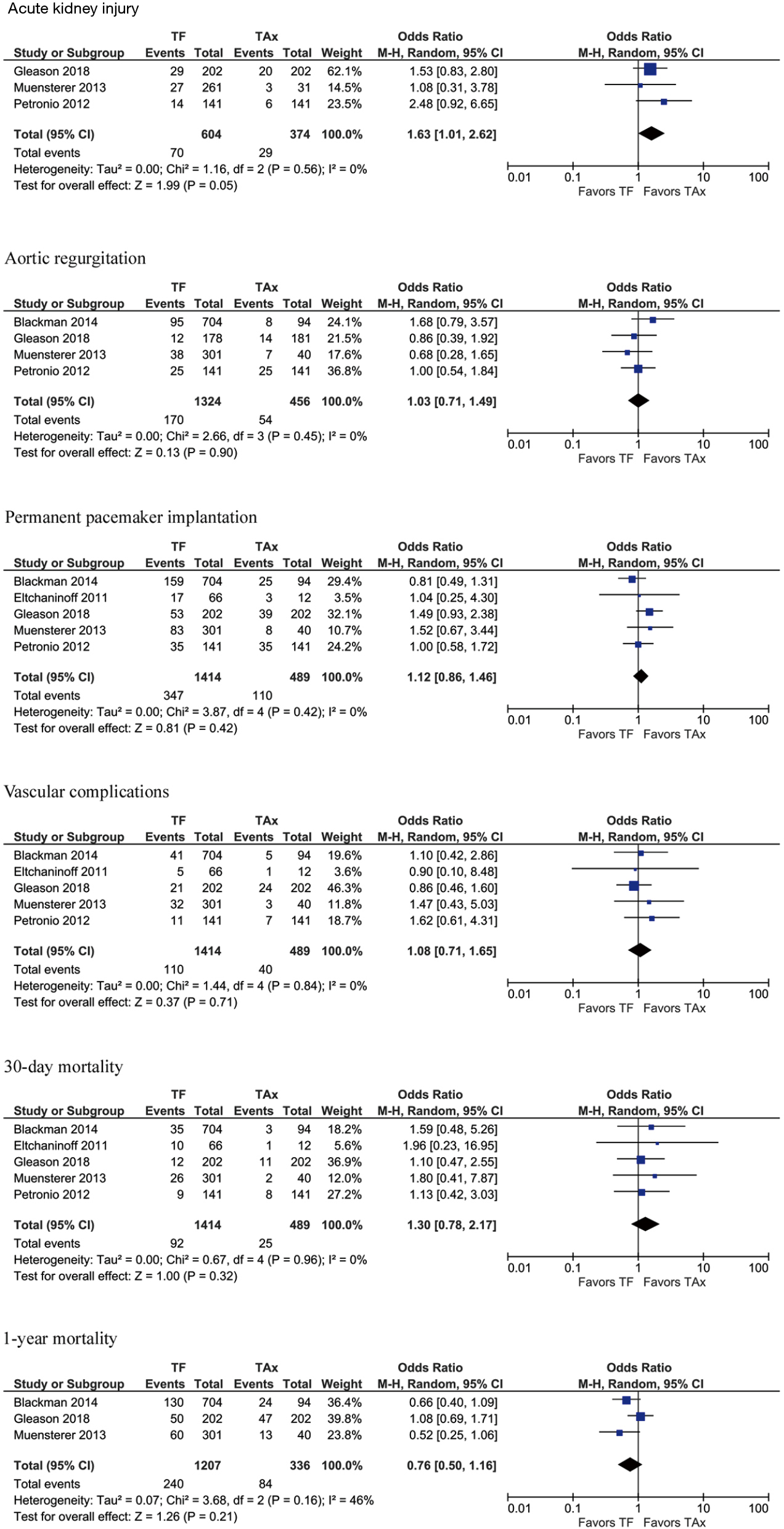 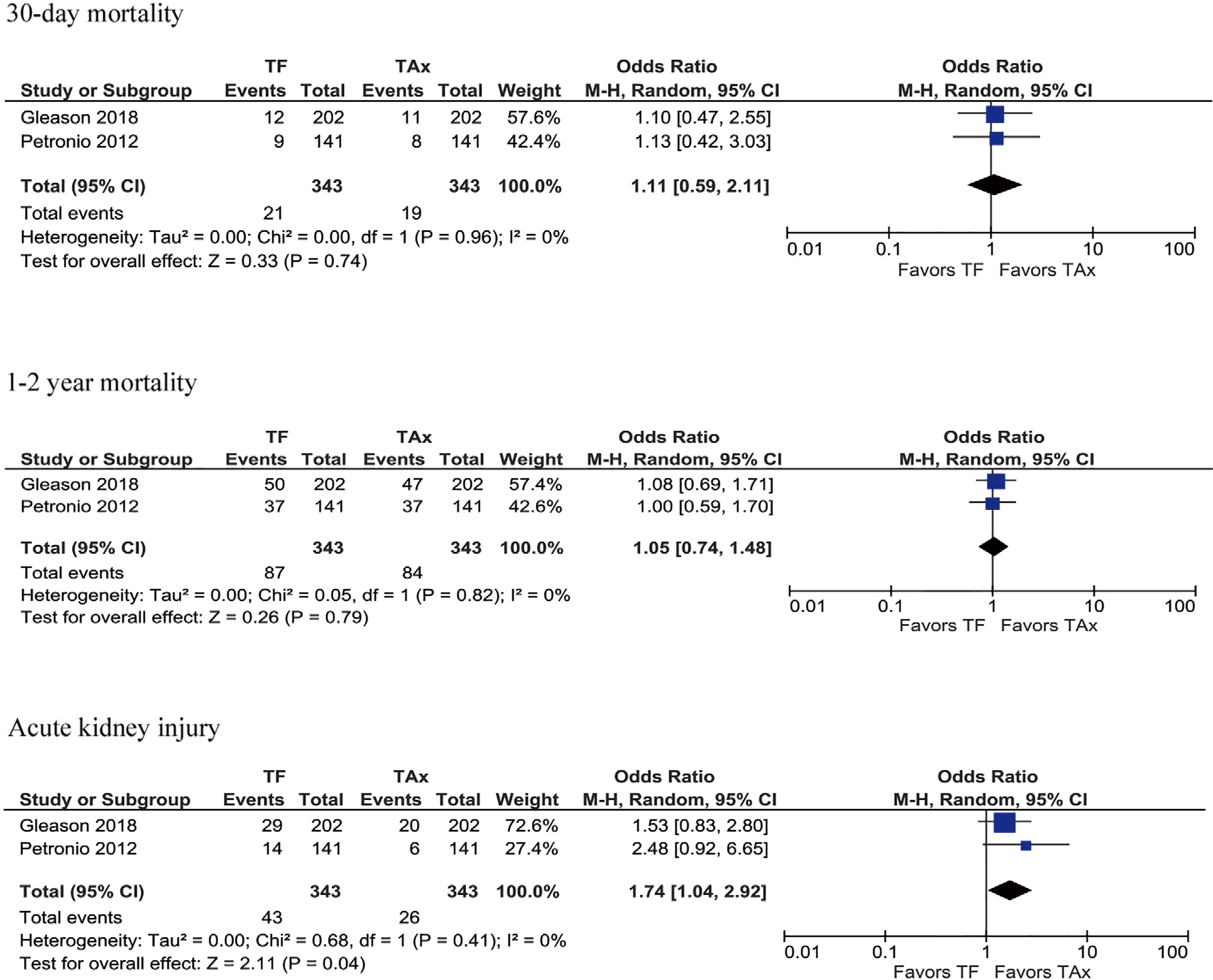 Data on the safety and efficacy of TAx-TAVR are scant. There are no randomized controlled studies comparing it to other TAVR approaches as to date. Previous meta-analysis studies comparing the TAx and TF approaches suggest that these techniques are associated with similar procedural and clinical outcomes (13,14). However, these studies did not either stratify the devices or provide sufficient data. With the knowledge that the outcome of TAVR can be device-related, the results were suggestive but not conclusive. We performed an updated literature search and focused on the CoreValve device, as it is the predominant device used for TAx-TAVR, to have a better comparison of the two TAVR approaches.

The major findings of this meta-analysis include that the TAx and TF approaches do not differ in most of the major outcomes. As observed in the current meta-analysis, the rate of moderate or severe (>2+) aortic regurgitation was irrelevant to the approaches. This was strengthened by the finding that the PPM implant rates were also similar between the two groups, 22.5% for the pooled TAx group and 24.5% for the TF group, consistent with reports in the literature on the TF approach (19,20). van der Wulp and colleagues reported their outcomes of left TAx-TAVR as the primary access site (21), and their PPM implant rate was 11%, which is significantly lower compared to the rate of 28% reported in the literature on the CoreValve (19). The low rate of PPM implant is possibly related to their use of the left axillary artery, which is more coaxial with the aorta, potentially resulting in better valve positioning compared with the right axillary access route. Our data is in accordance with the meta-analysis performed by Garcia et al. (14), showing that the TAx and TF approaches had a similar incidence of PPM implant when the utility of TAVR devices was stratified. Amat-Santos (13) showed a non-significant lower trend of PPM requirement for the TF group, possibly due to the fact that 32.3% (1,254/3,886) of the devices used in the TF group were SAPIEN valves, which are known for lower PPM requirement compared to early generation CoreValve devices (19,20,22).

Out of all the outcomes, the only difference that reaches statistical significance was the occurrence of AKI, which favored the TAx group. Although only three papers reported postoperative outcome data on AKI, it appears that their patients at risk preoperatively were matched between the TF and TAx groups as the percentage of patients with Cr >2mg/dL were similar in the studies (4,6), and Muensterer et al. also reported corresponding baseline Cr levels of the TAx- and TF-TAVR patients (5). The cause of low AKI incidence with TAx-TAVR is unclear. It was hypothesized that the TAx access could be associated with a shorter route and easier device positioning, thereby shortening the fluoroscopy time and reducing the amount of contrast. The TF group appeared to have a lower AKI rate in the Amat-Santos meta-analysis, although it did not reach statistical significance (13). The Garcia meta-analysis did not include AKI as an outcome (14). Although there could be selection bias between our meta-analysis, the data appears to be homogenous among the three papers that contain the AKI data. This result was further confirmed by our subgroup analysis of the two propensity-matched studies (Figure 3). Petronio and colleagues also observed that the rate of acute kidney injury/stage 3 was significantly lower in the subclavian group (4.3% vs. 9.9%, P=0.02) despite a higher percentage of subclavian access patients with serum Cr >2 mg/dL (13.5% vs. 8.5%, P=0.24). They postulated that it was possibly related to a higher amount of contrast medium was administered to the patients in the TF group due to the need for angiographic control of the iliofemoral arteries (6). However, their hypothesis was not confirmed by the data reported in two other studies included in our meta-analysis (Table 5), which revealed that the intraprocedural contrast doses were comparable between the TAx and TF groups (5,18).

Our data showed no significant difference in the 30-day mortality rates between the TF and TAx groups. This is consistent with the previous meta-analysis (13,14), suggesting the comparable invasiveness of TAx-TAVR and TF-TAVR. van der Wulp et al. demonstrated that the 30-day mortality and 1-year mortality observed with left TAx-TAVR as the primary access site were 5% and 19%, which were similar to the pooled results previously described for TF-TAVR (21). We speculate that the numerically but not statistically superior 30-day mortality of TAx-TAVR compared to TF-TAVR, as seen in Figure 2, could be due to publication bias. A subgroup analysis of two propensity-matched studies also supports this notion with the differences between the two groups even less pronounced (Figure 3). The non-significant trend toward lower 1-year mortality favoring the TF group might be related to the higher rate of comorbidities observed in the TAx group, although the discrepancy in the risk profiles did not appear to affect the perioperative outcomes adversely. The survival benefits were also not revealed by the subgroup analysis of the propensity-matched studies (Figure 3). As aforementioned, the de facto choice for TAVR has conventionally been TF access, whereas TAx-TAVR is considered when patients are not amenable to TF-TAVR. Taken together, these data suggest the survival of TAx-TAVR can be equivalent to TF-TAVR, especially in a risk-adjusted patient population. However, with concerns over increased risk of vascular complications and sometimes anatomical restraints, the axillary artery is often considered only when femoral access is not feasible.

With the advances in the TAVR devices and techniques, an alternative access is currently performed in only a small subset of TAVR procedures (3,7). The patients included in our meta-analysis were primarily high-risk cohorts, and the device studied was restricted to the previous-generation CoreValve. While the indication of TAVR is expanding rapidly to include low- or intermediate-risk patients, data on the outcomes of alternative access in these patient populations is lacking (33,34). As TAVR outcomes relate to patients’ characteristics and device features, such as profile and maneuverability, the applicability of TAx-TAVR potentially as the alternative access of choice for lower-risk patients and newer-generation devices deserves a careful examination.

Evidence remains limited in the literature concerning the outcomes of TAx-TAVR vs. TF-TAVR. As of this time, there is no randomized controlled trial on this subject. The major limitation of our study stems from the small number of studies qualified for the meta-analysis. The implication of our meta-analysis is also limited by the variations among the studies included in this analysis. There is inherent heterogeneity between different studies in terms of study design, description of baseline data, and outcome measures. While two of the studies included in this meta-analysis were propensity-matched with similar patient demographics, the other studies had major differences including patient baseline characteristics between the two groups.

TAx-TAVR is associated with overall outcomes comparable to TF-TAVR, despite a higher incidence of major comorbidities associated with the TAx-TAVR patient population. Although randomized controlled trials are required to establish its safety and efficacy, TAx-TAVR appears to be an excellent option for alternative access when femoral access is not available. While the current evidence is restricted to TAx-TAVR in high-risk patients, the outcomes of TAx-TAVR in the low- or intermediate-risk patient population remain to be studied. Additionally, our finding of a low AKI rate after TAx-TAVR warrants further investigation.