Although the use of segmentectomy for early lung cancer is still controversial, it has recently been accepted as a radical surgery for cT1aN0M0 non-small cell lung cancer (NSCLC). This surgery can be performed safely as open procedure (1,2). According to several recent reports, the clinical outcomes of segmentectomy are equal to lobectomy (1-4).

A 49-year-old female presented with a solitary pulmonary nodule on the chest screening computed tomography (CT) scan. The nodule was 1.3 cm in diameter and located in the apical segment of left upper lobe. The lesion was considered to be cT1aN0M0 NSCLC. There were no remarkable enlarged lymph nodes in pulmonary hilum and mediastinum on CT scan. No distal metastasis was found according to preoperative examinations including abdominal CT scan, enhanced head MRI and bone scanning. Pulmonary function was normal. Video-assisted thoracic surgery (VATS) wedge resection was thus performed and intraoperative frozen sections revealed a lung adenocarcinoma. Therefore, sequential S1+2+3 segmentectomy of the left upper lobe was performed, also systematic lymph node dissection was carried out. The final pathological stage was pT1aN0M0 (Ia). The patient was well recovered and discharged on postoperative day 4. 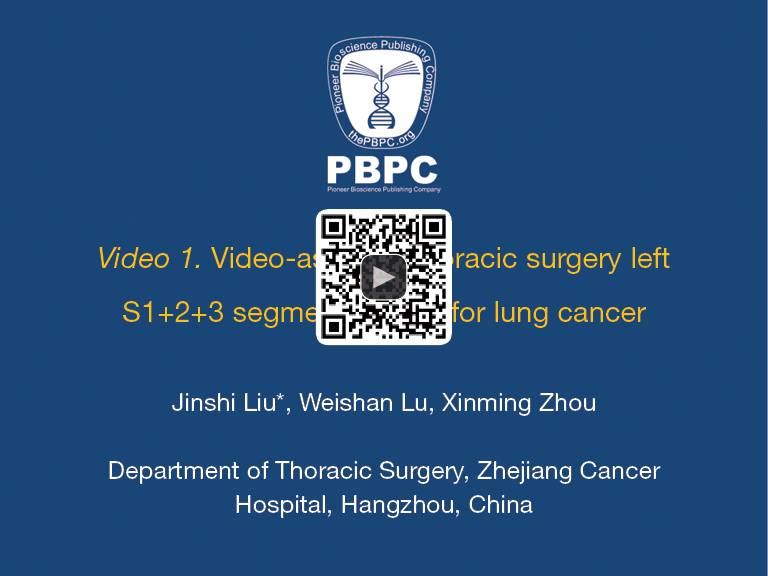 The nodule was in the apical segment of left upper lobe and palpable. Wedge resection was performed first and intraoperative frozen sections revealed a lung adenocarcinoma. Therefore, sequential S1+2+3 segmentectomy of the left upper lobe was decided to perform.

The upper lobe was gently retracted backward, the pleura covering the surface of superior pulmonary vein was opened with an electric hook. Combination of electric hook and blunt dissection, the S1+2+3 segmental pulmonary vein was dissociated, but the vein was not cut off yet. At the same time, the lingular vein should be identified and be preserved. Then pulled the upper lobe forward, opened the mediastinal pleura around the hilum and dissected the anterior trunk of the pulmonary artery. Devided the posterior part of the fissure with endo-GIA (blue stapler) and continued to dissected the S3 segmental pulmonary artery, then the artery was devided with endo-GIA (white stapler). There was bleeding at the anterior trunk when the artery was dissected, and the artery was pressed with a gauze to stop the bleeding and to be dissected later. Therefor we retracted the upper lobe backward and cut off the S1+2+3 segmental pulmonary vein with endo-GIA (white stapler). The anterior trunk was visualized clearly when the vein was separated and the bleeding had already stopped, then the artery was devided with endo-GIA (white stapler). Now the S1+2+3 bronchus was dissected easily and the linguar bronchus could be identified clearly, then the S1+2+3 bronchus was devided with endo-GIA (green stapler). Lymph nodes around the bronchus were dissected at the same time. At last, the lung was re-inflated and the segmental boundary was identified, and endo-GIA (green stapler) was used to devide the parenchyma. The specimen was removed in a glove.

Systematic lymph node (include station 5, 7, 8 lymph nodes) dissection was carried out subsequently. Station 4L lymph node was invisible in this patient. At last, the inferior pulmonary ligament was divided.

To avoid damaging left recurrent nerve, the nerve shoule be dissected carefully. Also, the vagus should be preserved. Electric hook and ultrasonic scalpel was used in the procedure of lymphadenectomy. Aspirator also acts as an important role in this surgery.

With the advances in radiographic devices such as high-resolution computed tomography (CT) and the widespread practice of low-dose helical CT for screening, more and more early NSCLCs are detected (6). For some patients in high risk, there is a decreased likelihood of having a second or even a third NSCLC. So, segmentectomy is more often performed and it can be applied to complicated operation such as bilateral segmentectomy (7).

Combination of electric hook and ultrasonic scalpel, and cooperated with aspirator can make the surgery smoothly.

Disclosure: The corresponding author has received a signed release form from the patient recorded on the video. The authors declare no conflict of interest.