Over the last 20 years, robotic technology has been more frequently utilized in the arena of minimally invasive thoracic surgery as the benefits of dexterous dissection and manipulation in a confined space make it ideal for intrathoracic dissection. For these perceived benefits in addition to competing market forces, surgeons are keen to adopt and claim this new technology. The increase in robotic surgery over the last decade has resulted in numerous studies touting its benefits and perhaps pressuring hospitals to acquire this modality in order to remain competitive.

However, as with all new technology, the decision to implement robotic surgery must be balanced by the financial capability to do so. In the current healthcare environment there is increasing pressure on all providers to deliver high quality care to more people at less cost. This mandate directly competes with the adoption of new and costly technology that may (or may not) improve patient care. The initial investment of purchasing a robotic surgery unit can range from 2–3 million USD depending on the accessories. A state of the art model includes 2 consoles, near infrared capability and training simulators. In addition to the upfront cost, there are the disposables, ongoing maintenance, and expected depreciation. Other less tangible but no less important costs include salaries, administrative overhead and non-robotic instrument expense. The premise is that better outcomes, shorter hospital stay and fewer complications will offset these higher costs.

Several studies have investigated the cost associated with robotics in different surgical procedures (1-5). Fewer have reported the cost of robotic-assisted thoracic surgery (RATS) compared with conventional video-assisted thoracic surgery (VATS) or open surgery and have described RATS to be more expensive (6-9). These studies tended to look at a small portion of the overall costs or were not specifically designed to look at the issue of total cost. We initiated this study to assess the financial impact of RATS in an academic institution, Temple University Hospital (TUH).

We retrospectively analyzed financial and clinical data collected prospectively for all patients who underwent any robotically assisted surgical procedure at TUH in fiscal year 2015 (FY15). The study was approved by the institutional review board (protocol # 24196) and was performed in collaboration with the office of Business Intelligence in the Finance department of Temple Health. The financial database (McKesson Performance Analytics System) was queried retrospectively using CPT codes to identify all patients undergoing robotic assisted procedures in addition to non-robotic thoracic surgical procedures in FY15.

In order to be clear and consistent, it is illustrative to define the terms used in this paper.

Net margin (NM) is the percentage of revenue remaining after all costs including indirect costs have been subtracted from total revenue.

We analyzed the data according to the following strategy:

Overall impact of robotics on the hospital including all services 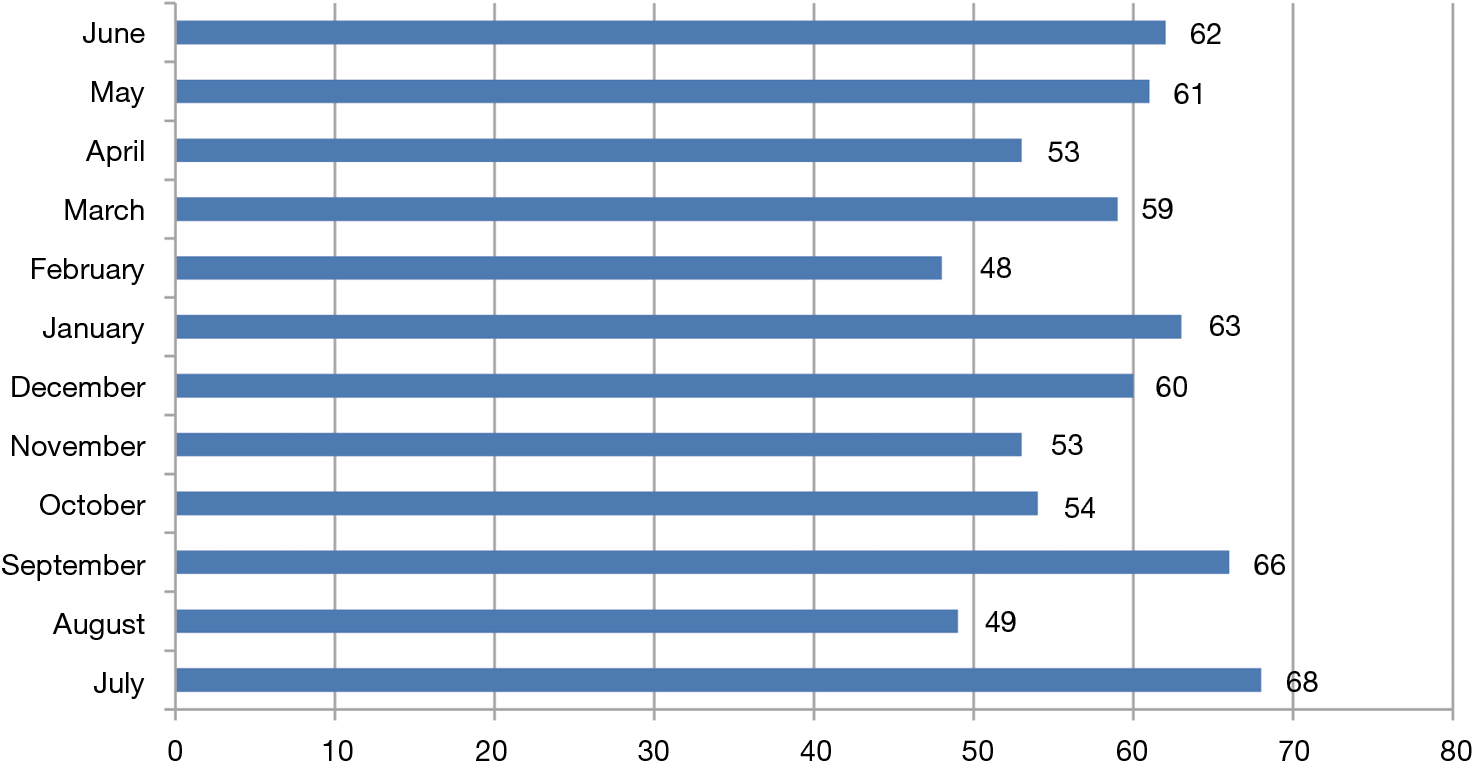 Figure 1 Number of robotic procedures performed by all services in FY15. 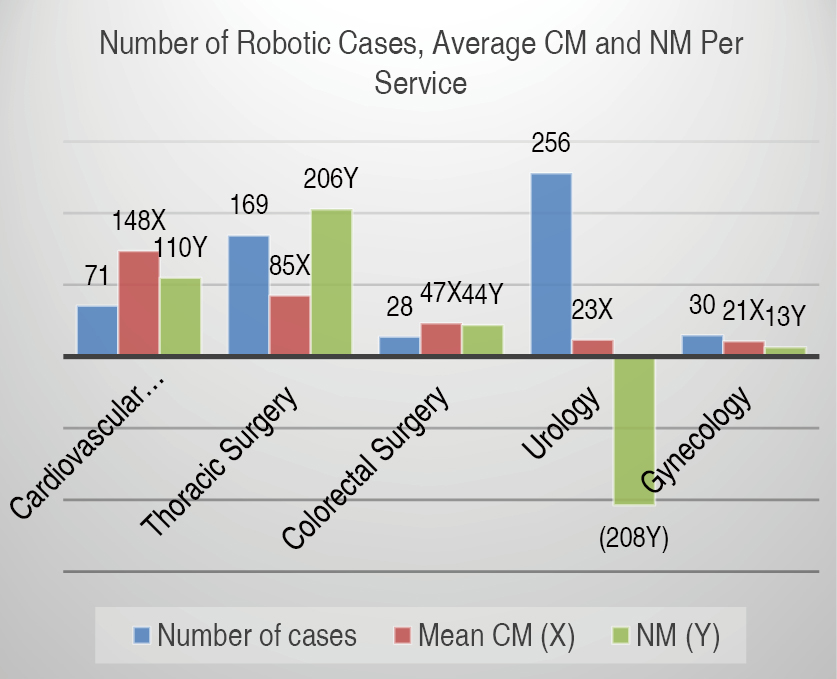 In FY15, a total of 696 robotic procedures were performed by the various services at TUH with a mean of 58 cases each month (range, 48–68) as shown in Figure 1. Surgical services with more than 20 annual robotic surgical cases were urology (n=256), thoracic surgery (n=169), cardiovascular surgery (n=71), gynecology (n=30) and colorectal surgery (n=28). Figure 2 shows the mean CM and NM per service. Due to proprietary reasons, unit values of “CMU” and “NMU” were used as surrogate dollar amount units for CM and NM respectively. Although CM was highest for cardiovascular surgery, the highest NM was by thoracic surgery. Despite having the highest volume and a positive CM, the mostly outpatient urology service showed a negative NM in FY15.

Mean CM and NM based on type of admission (Figures 3,4) 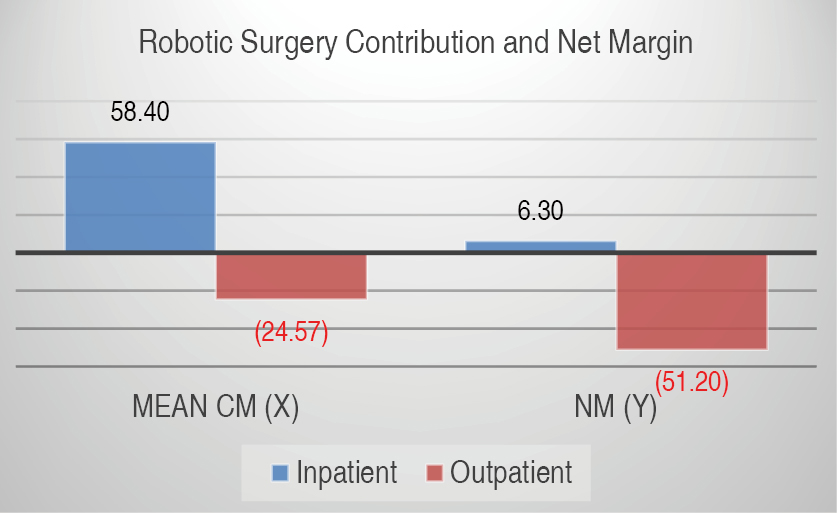 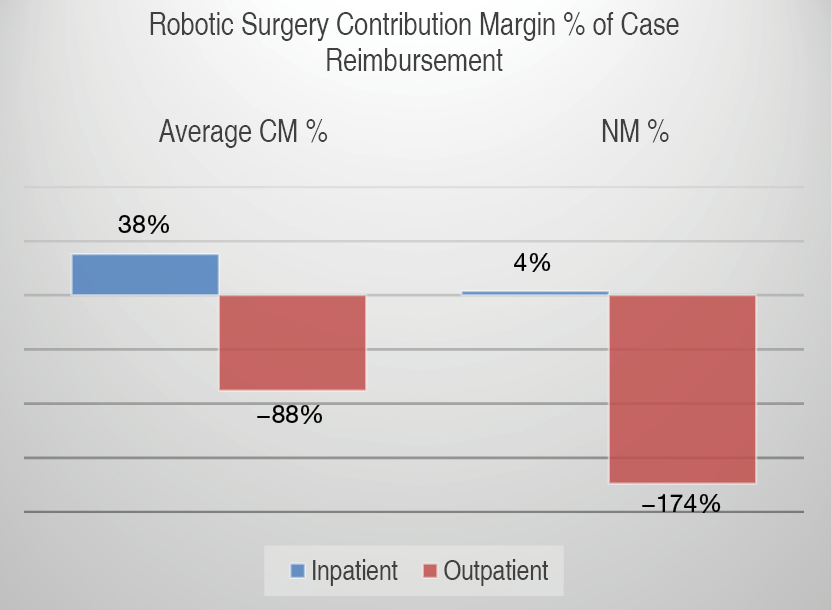 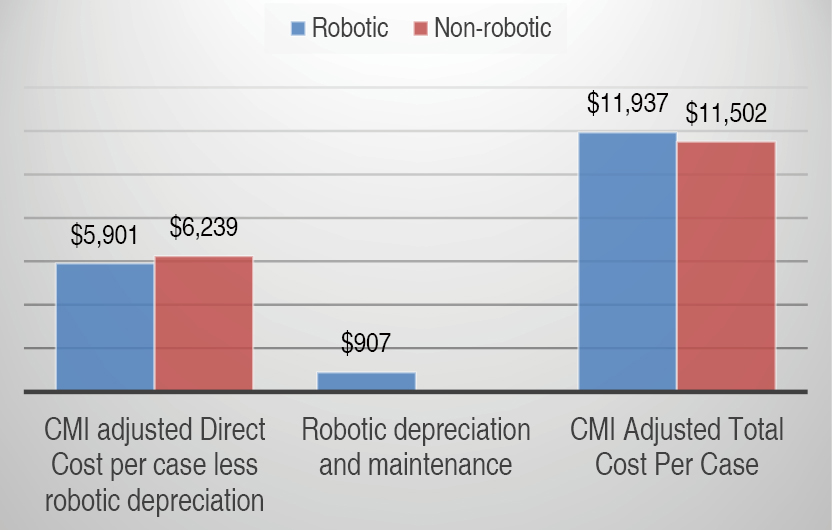 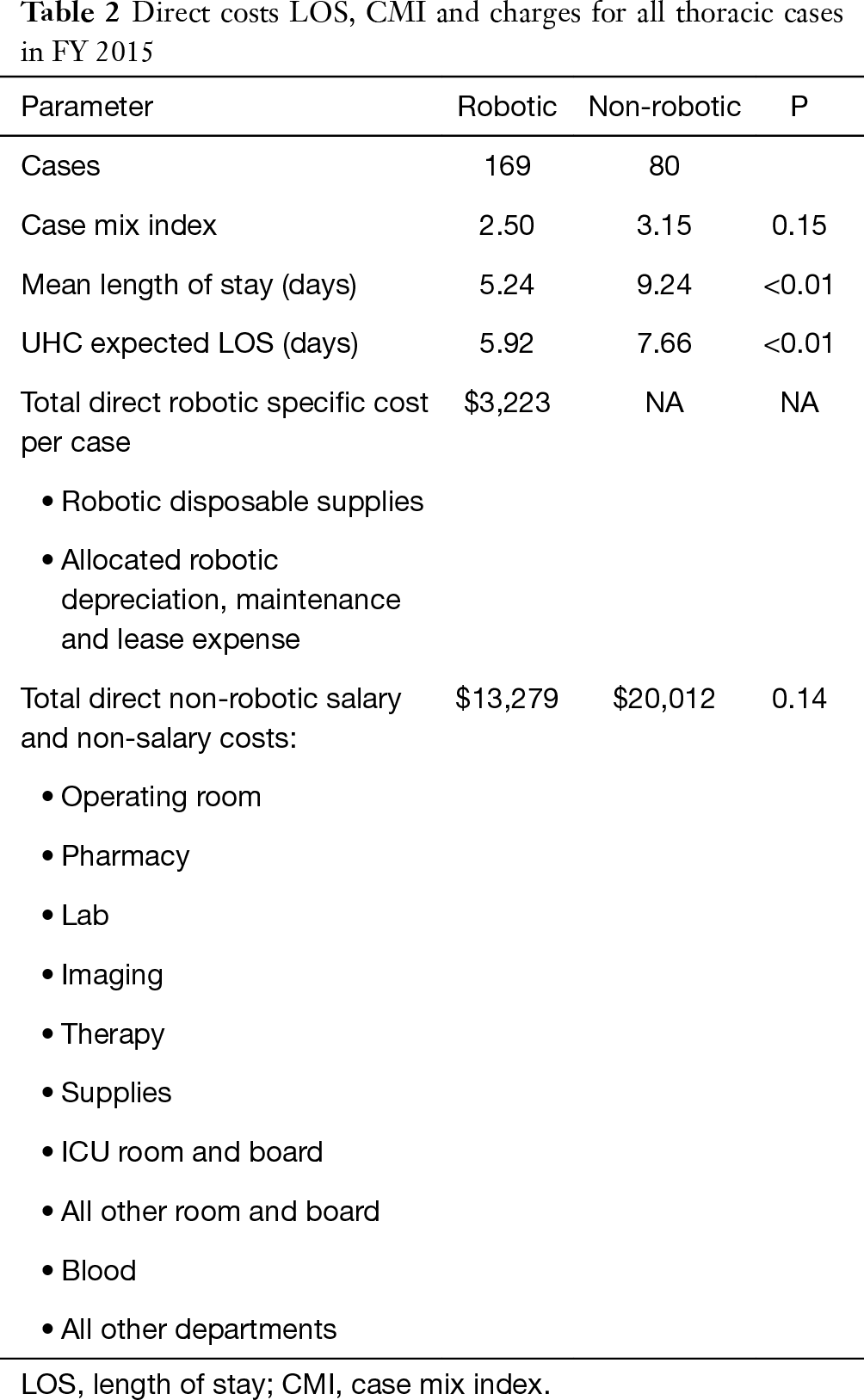 In FY15, a total of 249 operative procedures (excluding endoscopic and non-thoracic procedures) were performed on the thoracic surgical service. The number of robotic procedures (n=169) was more than twice that of the non-robotic ones. The case mix index (CMI) was lower in the robotic group as was the actual length of stay (ALOS). When compared with the University Health System consortium (UHC) expected ALOS, the robotic group had a lower ALOS while the non-robotic group had a higher ALOS. The mean Direct Robotic Specific Cost per Case was $3,223, but the mean total direct costs were actually $3,510 less for the robotic procedures ($16,502 vs. $20,012). A breakdown of direct costs on the thoracic service is shown in Table 1. 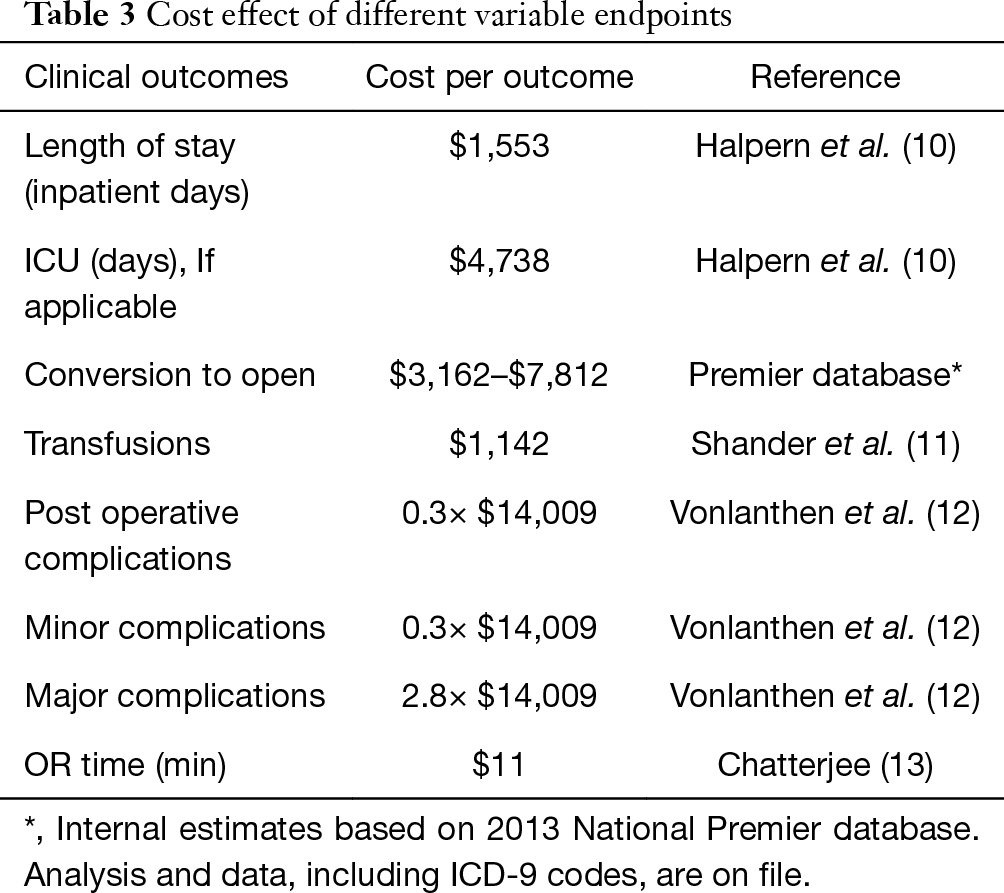 We have not attempted in this study to compare the clinical or even financial data of robotics to standard minimally invasive or open surgery. Rather we set out to evaluate the financial implications of introducing a robotics thoracic program in an academic institution.

The vast majority of technological innovation is accomplished by private entities that rightly seek to generate a return on their investment made in developing the technology. When there is evidence of benefit compared to standard treatments, there is also increasing pressure on physicians, hospitals and even patients to adopt this new technology which often leads to increases in costs. In fact, regardless of the acuity of the condition, there is also the moral dilemma of not withholding any treatment that may have a benefit, no matter how small, for our patients.

In an article by Laupacis in 1992, they proposed five ‘rades of recommendation’ for implementation. Grade A technology (more effective and less expensive than the existing one), whereas a grade E technology (less or equally effective and more costly). Grades B through D are more effective and more costly. Many issues other than cost effectiveness, such as ethical and political considerations, affect the implementation of a new technology. However, especially with current pressures to reduce costs as reimbursement is decreasing, it is important to make sound financial decisions related to the adoption and utilization of health care services (14).

Opportunity cost with respect to surgery, can occur if a certain technology uses more operating time than another. Economically, this adds a “cost” to the less efficient technology. Although this is a fundamental concept for economists it is seldom used in evaluation of surgical technology (13).

The pressure on hospital systems, particularly community hospitals is to avoid a competitive disadvantage with other hospitals that may have a certain device available. For academic institutions there may be an additional pressure to stay at the “cutting edge” of technology in addition to contributing to education and research, an imperative that adds to the cost of adopting new technology for these academic hospitals. An academic health care system must support both medical professionals and their patients in the adoption and use of beneficial new technologies, even when they may not be cost-effective or adequately reimbursed by insurers.

Robotic assisted surgery has been adopted rapidly throughout the world over the past 15 years with millions of cases performed using the da Vinci systems (Intuitive Inc, Sunnyvale, California), the leading robotic technology. As of September, 2016, 3,803 units were installed worldwide (2,501 in the United States, 644 in Europe, 476 in Asia). Initially developed for cardiac surgery, it was soon adopted by urological surgeons who found it ideal for prostatectomy. It then gained significant acceptance with other specialties including gynecology, general surgery, colorectal surgery and thoracic surgery.

Robotic thoracic surgery is a relatively new field that is enjoying extremely rapid adoption from less than 1 percent of lobectomies being performed robotically before 2008 up to 11 percent by 2013 (8,15-17). Several studies have reported on the additional cost of robotic surgery compared to conventional techniques. To date, there have been no large-scale randomized trials comparing robot-assisted surgery to other modalities. Limited observational studies show conflicting short-term outcomes but few benefits in long-term outcomes of robot-assisted surgery over conventional procedures (2).

Barbash in 2010, examined all the cost studies looking at robot-assisted procedures published from 2005 to 2009 and found the mean additional variable cost of using the robot over non-robotic surgeries was about $1,600, or 6% of the overall cost of the procedure in 2007 (15,18). In 2008, Park and Flores reported that RATS lobectomy was associated with increased cost adding on mean $3,981 compared with VATS alone. Surprisingly both VATS and RATS had significantly less cost compared to open thoracotomy (9).

In a study by Swanson using the Premier hospital database, the mean cost for a RATS lobectomy was $25,040.70 versus $20,476.60 for VATS (P<0001). Operating times were longer for RATS than VATS lobectomy (4.49 vs. 4.23 hours; P=0.959) and length of stay was similar (7). In another study comparing results from two institutions with data from the STS database, Farivar described statistically significant improvements for RATS with shorter operative time, chest tube duration and hospital stay than for VATS or thoracotomy (16,19). In one other study of 184 consecutive patients (69 open, 57 robotic, and 58 VATS), Deen and colleagues reported operative time was statistically different among the three modalities, but length of stay was not. There was no statistically significant difference in overall cost between VATS and open cases (difference = $1,207) or open and robotic cases (difference = $1,975). Robotic cases cost $3,182 more than VATS (P<0.001) (6).

We examined the effect of adopting robot-assisted thoracic surgery at TUH which is part of a health system that includes 3 hospitals and has 36,000 annual admissions with an annual budget of $2,000,000,000. At the time of the study, almost all robotic procedures were performed by a single surgeon (first author). Procedures performed included anatomical lung resection, resection of mediastinal tumors, esophagectomy and benign foregut procedures.

At our institution, thoracic surgical robotic procedures had the highest NM compared to other services but a net positive margin was possible only for inpatient procedures. This was especially true for those cases with a high CMI and short length of stay. Interestingly, these findings closely mirror a previously report in 2005 by Resnick and colleagues on the impact of different surgical specialties in an academic center. In their study of surgeon total relative value units (RVUs), they found that among the various surgical specialties, Thoracic Surgery followed by Transplant Surgery were the biggest contributors to hospital margin (17,20). Outpatient robotic procedures were associated with a negative NM for all specialties.

Though our cost comparison for thoracic surgical cases was not made between matched patients we found no obvious increased cost between robotic and non-robotic cases. In fact, the mean total direct costs were $3,510 less for the robotic procedures.

This study is the first to show a comparison of the economic impact of robotics among a variety of surgical services in a large tertiary care center in addition to those factors that may result in a positive net margin. Specifically, cases with a higher CMI, inpatient procedures, short length of stay, and minimal postoperative complications.

High acuity services such as Thoracic Surgery drive higher CM per case as long as variable costs, especially LOS, are kept low. Procedures with lower CMI may not provide a high enough CM to offset the higher fixed and variable costs. Surgical cases performed with the robot in the outpatient setting may incur significant losses and should be done judiciously. Hospitals should preferentially allocate robotic resources to inpatient procedures. Robotic surgical systems have high fixed costs, with capital investment up to $2.5 million for each unit. Surgeons must perform numerous procedures to overcome the “learning curve” and even when they become proficient with the robot the procedures may require more operating time. The systems also require expensive maintenance and upkeep and require the use of additional consumables. The hope is that these new costs may be offset by fewer complications, shorter hospital stay, and possible societal productivity gains with faster return to work.

Funding: This research was funded in part through the NIH/NCI Cancer Center Support Grant P30 CA006927.

Conflicts of Interest: The author, Abbas E. Abbas, MD is a paid consultant for Boston Scientific, Inc and Intuitive Surgical, Inc. Neither entity was involved in the preparation of this manuscript. The other coauthors have no declared conflicts of interest.

Ethical Statement: The authors are accountable for all aspects of the work in ensuring that questions related to the accuracy or integrity of any part of the work are appropriately investigated and resolved. The study was approved by the institutional review board (protocol # 24196) and was performed in collaboration with the office of Business Intelligence in the Finance department of Temple Health.