Lung cancer is the most frequent cause of cancer death, worldwide (1). In the last years, several clinical trials have defined the pivotal role of the molecular assessment of different biomarkers, such as epidermal growth factor receptor (EGFR), anaplastic lymphoma kinase (ALK), ROS proto-oncogene 1 receptor tyrosine kinase (ROS1), v-Raf murine sarcoma viral oncogene homolog B (BRAF), and programmed death-ligand 1 (PD-L1), in order to administrate either tyrosine kinase inhibitors (TKIs) or immune-checkpoint inhibitors to improve survival and quality of life of advanced stage non-small cell lung cancer (NSCLC) patients (2-14). For this reason the international guideline from the College of American Pathologists (CAP), the International Association for the Study of Lung Cancer (IASLC), and the Association for Molecular Pathology (AMP), the National Comprehensive Cancer Network (NCCN) and the American Society of Clinical Oncology (ASCO) guidelines established a minimum panel of “must test genes”, represented by mutations in EGFR, and BRAF, and gene fusions affecting ALK and ROS1, in addition to evaluation of the expression of PD-L1 (15-17).

Beyond these biomarkers, other genes are currently being evaluated as predictive indicators (18-21). In particular, Kirsten Rat Sarcoma Viral Oncogene Homolog (KRAS) mutations, occurring in 25–30% of NSCLC patients, have recently acquired a relevant interest, not only as a negative prognostic biomarker, but also as actionable targets (22). As a matter of the fact, a great deal of interest was raised by KRAS exon 2 p.G12C (occurring in about 13% of NSCLC patients). In fact, the preliminary results, presented at the 2019 ASCO annual meeting, on the performance of the small molecule AMG510 (Amgen, Thousand Oaks, CA) in a phase 1 clinical trial were promising both in terms of efficacy and safety (23,24). Currently, also other drugs targeting different KRAS mutations are under investigation (25).

In order to simultaneously detect all these relevant biomarkers, high throughput devices should be implemented in molecular predictive pathology laboratories. Next generation sequencing (NGS) is a fascinating tool that enables the analysis of different biomarkers for different patients at the same time (26). In our Institution we routinely adopt NGS to assess NSCLC biomarkers; to this end, we designed a customized NGS panel, that makes cost-effective the batching of different tumor samples. In fact, this panel, termed SiRe®, is meant to provide a unique workflow of samples for different specimen types (tissue and liquid biopsies) (27-30). Thus, whenever tissue is not adequate or available for NGS testing, which is a common occurrence for advanced stage NSCLC patients, SiRe® NGS plasma based analysis is a viable option to assess EGFR mutational status (31). In a previous study, we showed that SiRe® panel analytical parameters, such as number of total reads, mean read length, number of mapped reads, percentage of reads on target, average reads per amplicon and uniformity of amplicon coverage, are more than satisfactory to reliable assess EGFR mutational status (29). Beyond EGFR testing, the SiRe® panel also generate data on KRAS mutational status. Thus, in this study, we reviewed our NGS records, generated in the last three years from plasma specimens. While for EGFR testing a well defined diagnostic algorithm has been established, no specific data are available to evaluate quality benchmark for plasma based KRAS testing. This study was undertaken firstly to assess whether, in patients without available or adequate tissue, liquid biopsy is a feasible and reliable tool; secondly, to evaluate the overall KRAS mutational rate and the occurrence of single hotspot alterations in exon 2 and 3. The final goal is to build data derived from clinical practice to be useful to designed specific diagnostic algorithm that could harmonize KRAS tissue and blood based assays.

To establish the rate of KRAS mutated cases in NSCLC as detected by the SiRe® panel on blood, a computerized search was carried out. Patients who performed SiRe® NGS plasma based analysis, from January 2016 to December 2018, were selected by using the following inclusion criteria: (I) cyto-histological evidence of advanced stage lung adenocarcinoma, (II) unavailability of adequate tissue samples for molecular tests, and (III) naïve to any treatment. This search yielded a total of 194 patients, with a preponderance of male (123/194, 63.4%); the overall KRAS mutation rate and the distribution of the single mutation occurring in exon 2 and 3 was assessed in this population.

All information regarding human material was managed using anonymous numerical codes, and all samples were handled in compliance with the Helsinki Declaration (). According to the aforementioned National Guidelines, the study did not require an Ethical Committee approval since it did not modify the patient clinical management.

In this current study, to assess the robustness and the reliability of SiRe® panel on blood, cases showing KRAS mutations were evaluated from an analytical point of view, taking into account several run metric parameters; in particular, number of total reads, mean read length, number of mapped reads, percentage of reads on target, average reads per amplicon and uniformity of amplicon coverage were evaluated for each KRAS mutated case.

On the overall, 36 (18.6%) out of the 194 liquid biopsies harbored a KRAS point mutation either in exon 2 or in exon 3 (Table 1). No concomitant mutations were observed in the other NSCLC clinical relevant genes included in the SiRe® panel, such as EGFR and BRAF. 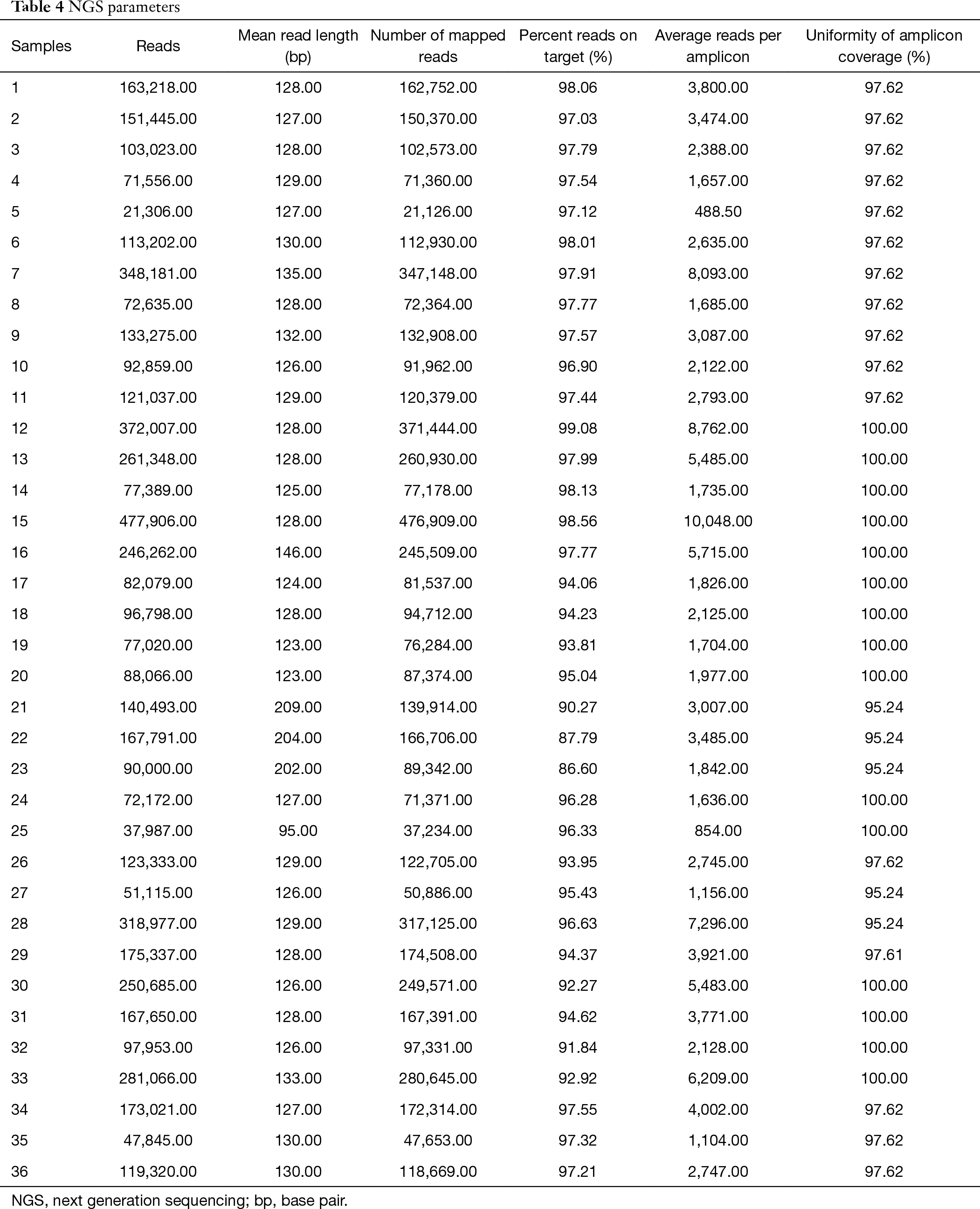 Our data obtained in real life, generated from a review of routine clinical reports, underlined the technical feasibility of KRAS mutation assessment in plasma samples. In fact, in advanced stage NSCLC treatment-naïve patients, the customized NGS SiRe® panel offers a valuable option to select, for targeted treatments, patients that despite the morphological evidence of NSCLC do not have tissue availability for molecular diagnosis (Figure 1). Diagnostic algorithms are well designed for EGFR testing, as liquid biopsy is recommended as the initial procedure whenever tissue is not available (32). Conversely, clinical procedures are less well established to detect KRAS exon 2 p.G12C as an actionable biomarker. To date, KRAS testing in advanced stage NSCLC patients has been performed either to provide prognostic information (33), or to rule out less common driver alterations, to make lung biomarker testing more effective. More recently, KRAS exon 2 mutations also acquired a novel predictive significance. In particular, promising results have been shown by a novel drug (AMG510) administered to advanced stage NSCLC patients harboring a KRAS exon 2 p.G12C point mutation (24). Were these very promising data confirmed in a phase III clinical trial, it would be conceivable that KRAS mutational testing will soon be mandatory in clinical practice. Currently, in the experience of our laboratory, a referral center for lung cancer biomarker testing, tissue specimens are often (17%) rejected for insufficient cellularity (34). Thus, it is conceivable that KRAS testing will be often performed on ctDNA. In this setting, multiplexing is crucial to ensure a complete genomic profile. In addition, when evaluating cases wild type for KRAS mutations, the possibility to detect EGFR and BRAF mutations would be very useful to distinguish between real KRAS wild type samples from those tumors that do not shed ctDNA into the bloodstream. In other words, testing plasma for KRAS mutations has a double role: first, to select patients for AMG510; second, to make the molecular status assessment of EGFR and BRAF more cost-effective. In fact, considering our data, a not negligible subset of patients (6.7%; 13/194) of cases showing a KRAS exon 2 p.G12C point mutation may undergo a KRAS TKI treatment, while an additional 11.9% (23/194) of cases, showing other common KRAS alterations, would not need an EGFR and BRAF molecular test. 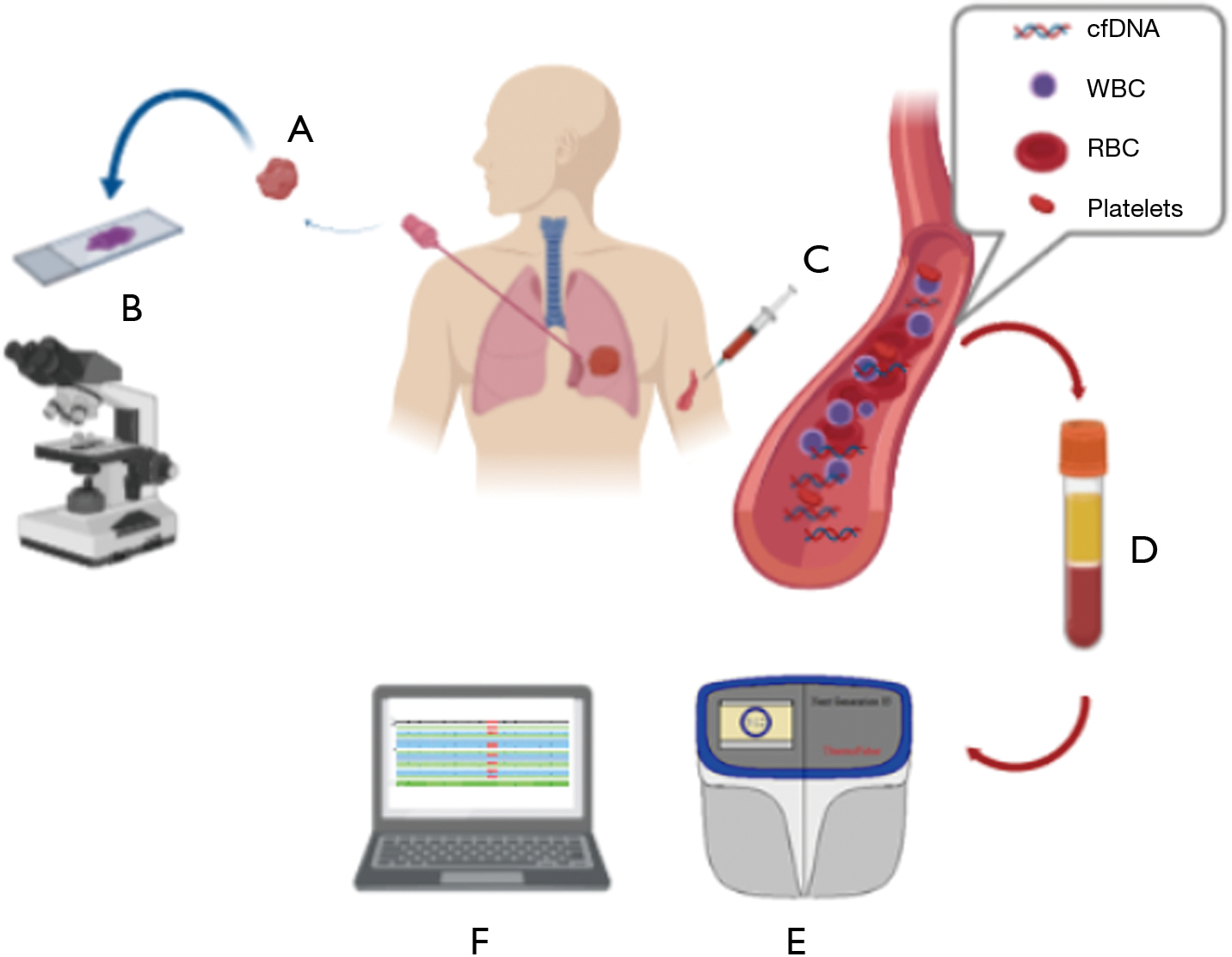 Figure 1 If tissue samples (histological or cytological) were inadequate or insufficient at morphological evaluation for molecular analysis (A, B), liquid biopsy may represent a useful tool (C). In our study, after blood withdrawn (C), plasma was obtained after centrifugation (D) and extracted ctDNA was further analyzed by using our next generation sequencing panel (SiRe®) on S5 platform (Thermo Fisher Scientific, Waltham, MA) (E). Visual inspection of the sequencing reads was performed by using the Golden Helix Genome Browser v.2.0.7 (Bozeman, MT, USA) (F). (Credit: Created with Biorender).

Despite our efforts to provide an accurate and comprehensive evaluation of the role of KRAS testing on liquid biopsy, the main limitation of this study, relies on its retrospective design. In addition, it was not possible to correlate the mutational status assessed on plasma with information relative to tissue, since matched cytohistological samples were not available. However, the aim of this study was to provide a snapshot of KRAS mutational evaluation on liquid biopsy in advanced stage NSCLC patients in routine setting. In fact, data relative to the previous validation study performed on matched tissue and blood samples strongly suggested that SiRe® NGS panel can be a reliable tool in clinical practice even when tissue samples are not available.

This study was funded by the Department of Public Health of the University of Naples Federico II.

Conflicts of Interest: All authors have completed the ICMJE uniform disclosure form (available at ). The series “Improving Outcomes in Lung Cancer Through Early Diagnosis and Smoking Cessation” was commissioned by the editorial office without any funding or sponsorship. The authors have no other conflicts of interest to declare.

Ethical Statement: The authors are accountable for all aspects of the work in ensuring that questions related to the accuracy or integrity of any part of the work are appropriately investigated and resolved. All information regarding human material was managed using anonymous numerical codes, and all samples were handled in compliance with the Declaration of Helsinki (as revised in 2013). According to the aforementioned National Guidelines, the study did not require an Ethical Committee approval since it did not modify the patient clinical management.

Open Access Statement: This is an Open Access article distributed in accordance with the Creative Commons Attribution-NonCommercial-NoDerivs 4.0 International License (CC BY-NC-ND 4.0), which permits the non-commercial replication and distribution of the article with the strict proviso that no changes or edits are made and the original work is properly cited (including links to both the formal publication through the relevant DOI and the license). See: .