Lung transplantation became a standard procedure in patients with end stage lung disease but despite optimized donor management only 40–50% of lungs from multi-organ-donors are transplanted. To overcome the shortness of donor organs, extended criteria donor (ECD) lungs are more frequently evaluated for transplantation by use of normothermic ex vivo lung perfusion (EVLP) (1). Previous studies showed that these lungs after pre-transplant check can be transplanted with good results (2). Nakajima reported that EVLP treatment with broad spectrum antibiotics significantly reduced the bacterial burden and endotoxin levels in infected donor lungs (3). Despite antimicrobial and antiviral prophylaxis infections are major contributors to morbidity and mortality after lung transplantation. Especially cytomegalovirus (CMV) is a very common pathogen (4,5). Little is known about the postoperative course of EVLP lungs and incidence of CMV infection.

It was the aim of this study assess if there was an influence of normothermic EVLP on early perioperative CVM conversion in comparison to a cohort of patients after standard cold storage preservation (CSP).

In a single center analysis, we retrospectively analyzed data of 57 lung transplant recipients transplanted between Mai 2016 and October 2018. The study was approved by the Local Ethics Committee of the University Duisburg-Essen (15-6711-BO) and conducted according to the declaration of Helsinki. Lung offers were allocated according to Eurotransplant allocation rules. All CMV donor+/recipient+, CMV D−/R+ (intermediate risk for CMV reactivation) CMV D−/R− (low risk) and D+/R− (high risk) single and bilateral lung transplant (LT) recipients were included. Every lung offer was assessed by two experienced transplant surgeons. Lungs were either directly used for transplantation or categorized as ECD if at least one or more of the following criteria was met: PaO2/FiO2 <300, age >55, signs of aspiration, smoking history, abnormalities on chest X-ray or evidence of contusion/trauma (6). These lungs were regarded as to be potentially salvable if: PaO2/FiO2 <300 without obvious explanation, (neurogenic-) lung edema, pulmonary infections, pulmonary embolism. With regard to these criteria 21 ECD donor lungs were assessed by EVLP. After 4-hour evaluation 5 donor lungs had to be declined, 16 lungs were transplanted. 41 lungs were transplanted with the use of CSP.

After acceptance donor lungs were evaluated in the donor hospital by bronchoscopy, direct inspection and for gas exchange function. All donors were treated according to a standard donor protocol with oro-tracheal suction, increased cuff pressure and antibiotic therapy. When last PaO2/FiO2 before organ retrieval was below 300 and the donor lungs were regarded potentially salvable according to the above mentioned criteria, the decision was made to use EVLP. For preservation all donor lungs were perfused with 4L (3 L antegrade/1 L retrograde) low potassium dextran solution (Perfadex, Xvivo, Denver, CO, USA) at 4 °C and transported on ice. After transport EVLP lungs were mounted on the EVLP system (XPS, Xvivo, Denver, CO, USA). The technique of EVLP has been described in detail elsewhere (7,8). After cold preservation donor lungs were cannulated via the pulmonary artery and the left atrium to the EVLP system. The EVLP system consisted of a perfusion circuit with a centrifugal pump, oxygenator, a heater-cooler, a ventilator and a monitoring console. Donor lungs were placed in a sterile dome and perfused with the albumin and dextran rich Steen-solution (Xvivo, Denver, CO, USA). During the 4-hour perfusion procedure lungs were gradually rewarmed and after reaching a temperature of 32 °C ventilation with a calculated tidal volume and PEEP of 5 cm H2O is started. Perfusion volume was aimed at 40% cardiac-output. The oxygenator served as a de-oxygenator by administration of a venous gas mix (6% O2, 8% CO2, 86% nitrogen). After every hour a recruitment maneuver with increased tidal volume was performed to evaluate the oxygenation capacity of the donor lungs. The difference of oxygen content between pulmonary venous and pulmonary arterial perfusion solution was calculated (ΔpO2). Lungs that were regarded transplantable, were expected to archive a ΔpO2 >350 mmHg at the end of the 4-hours process.

Demographic and clinical data were retrospectively collected from the patients and electronically stored in medical records. Transplant relevant information as age, sex, indication for transplantation, ventilation time and length of ICU stay and in-hospital stay, as well as immunosuppression, antiviral prophylaxis and episodes of CMV infections were included. C-reactive protein (CRP) and procalcitonin (PCT) values were reviewed in the early postoperative period (5 postoperative days). CMV infection and disease were classified according to the American Society of Transplantation recommendations and the international consensus guidelines (9). Asymptomatic CMV infection was defined as the detection of CMV (>1,000 copies/mL in bronchoalveolar lavage fluid or >500 copies/mL in blood) without clinical manifestations. In contrast CMV disease was defined as presence of CMV in blood, bronchoalveolar lavage fluid and tissue plus clinical symptoms like viral syndrome manifestations.

SPSS Version 21.0 (IBM Corp., SPSS Statistics, Armonk, NY, USA), was used for statistical analysis. Continuous variables are summarized as mean (standard deviation), unless indicated otherwise and categorical variables as counts (percentages). Continuous data were evaluated for normality of distribution using the Shapiro-Wilk’s test. Two-sided t-test was used for comparison of continuous, normally distributed data. The Chi-square test was used for testing association between two categorical variables. The level of significance was set to <0.05. 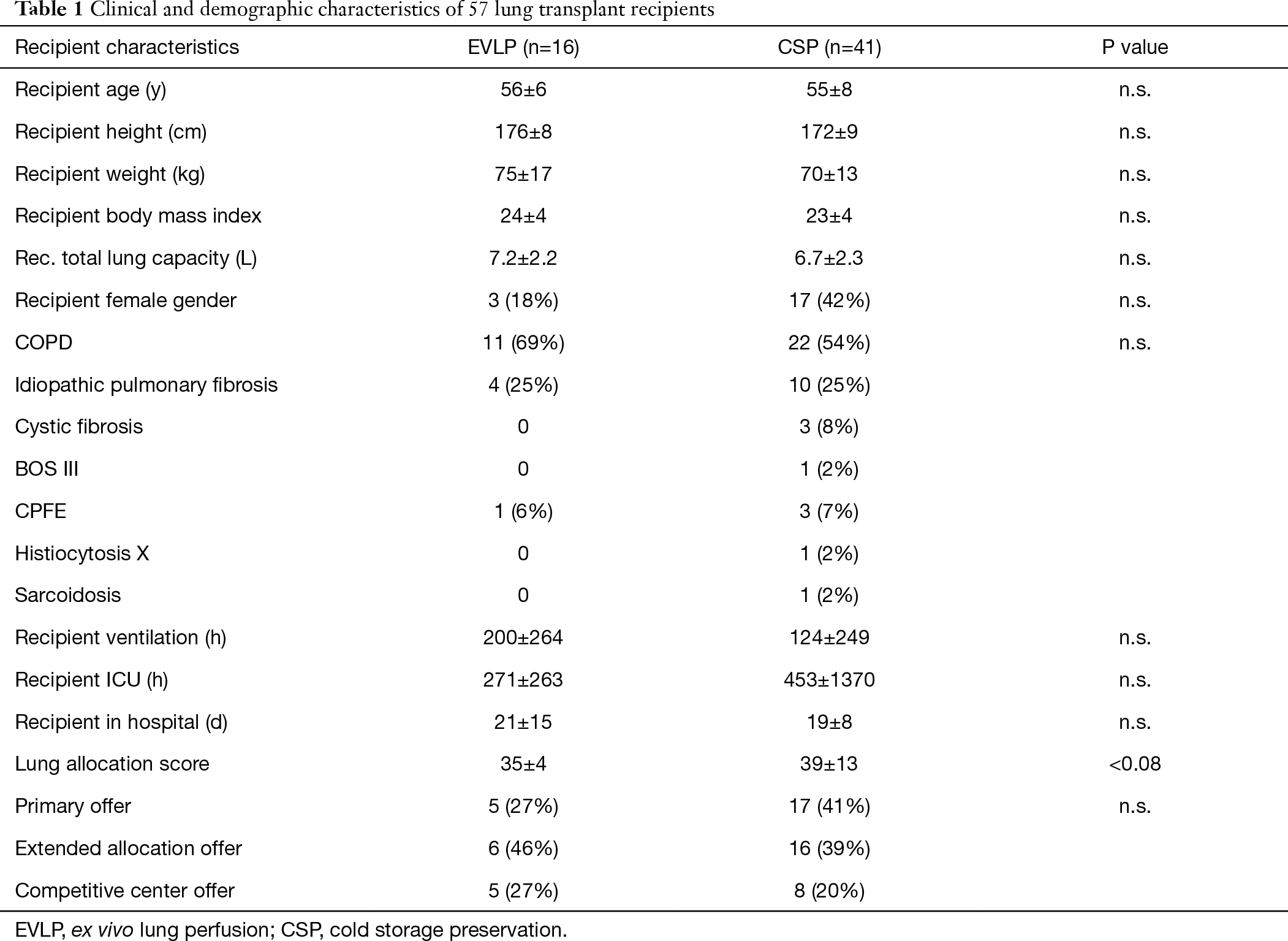 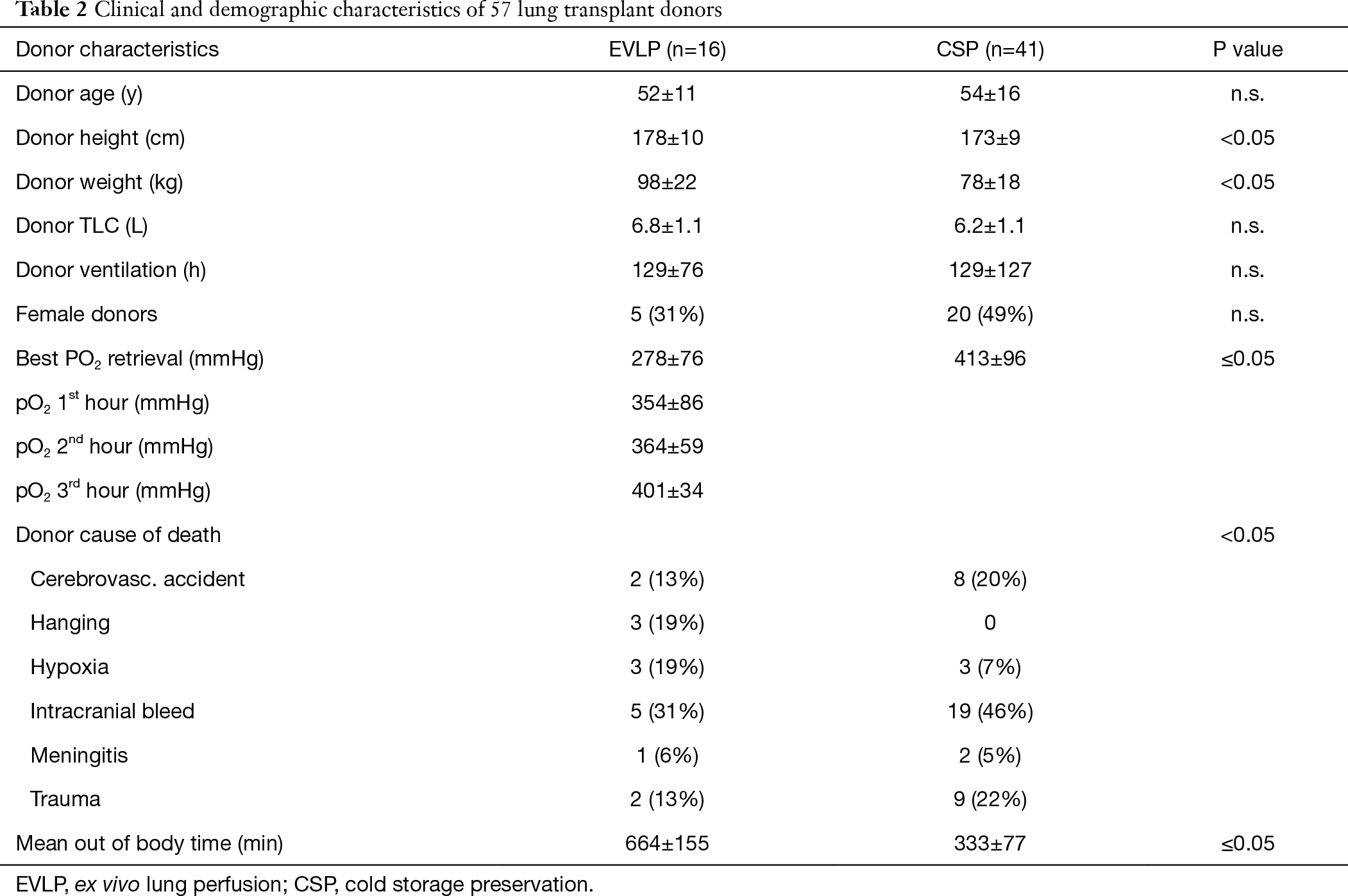 The 30-day mortality was 12% for EVLP recipients. One year survival rates were not significantly different (95% in CSP group and 78% in EVLP group).

This study demonstrated that normothermic EVLP is a safe tool for evaluation of donor lungs previously deemed not transplantable. In addition, this study showed that EVLP treatment did not negatively affect the post-transplantation CMV seroconversion rate in a cohort of 57 lung transplant recipients.

The discrepancy between demand for lung transplantation and availability of transplantable lung offers is a growing problem in recent years (10). Despite of extension of donor lung criteria, acceptance rates for donor organs in LTx remain the lowest among solid organ transplantation. Donor related risk factors for primary graft dysfunction are not fully understood adherence to standard donor criteria leads to discard of lungs that might be usable after assessment of graft function by means of EVLP (11). Normothermic EVLP is used to achieve a “more complete” and objective evaluation of lung function with the potential option to “repair” injured donor lungs (12).

In this retrospective study, we analyzed our experience with normothermic-EVLP and evaluated an influence of CMV seroconversion in the early postoperative period. CMV disease rates are higher in LTx recipients than in all other solid organ transplants. In absence of preventive therapy CMV causes infection in up to 80% of LTx recipients and is a major contributor to morbidity and mortality after LTx. Its indirect effects include increased risk for other infections and frequent rejection episodes leading to chronic lung allograft dysfunction (4). The CMV virus has a predilection for lung parenchyma and latent viral loads and seroconversion rates above 20% are reported in the literature. The lower CMV seroconversion rates observed in our study may be attributed to a reduction of viral load by dilution during perfusion in EVLP. The greatest risk of CMV disease is among seronegative recipients (R-) who received organs from seropositive donors (D+). Thus, the use of EVLP can serve as an additional preventive strategy apart from ganciclovir regimes which effectively reduce CMV infections. However, use of intravenous ganciclovir is limited by systemic toxicity and oral ganciclovir has limited bioavailability and resorption. As CMV infections are most common within the first postoperative year, guidelines recommend 6–12 months of prophylaxis in D+/R- patients and at least six months among CMV R+ recipients. Treatment is recommended for any level of CMV replication (whole blood PCR). Direct effects of CMV are fever, bone marrow suppression and tissue invasive disease, including pneumonia. CMV infections and disease occurred after discontinuation of antiviral prophylaxis that was necessary for leukopenia caused by valganciclovir related myelosuppression. In valganciclovir resistant CMV disease mortality is up to 100%, it remains a major clinical problem among D+/R− LuTx recipients despite valganciclovir prophylaxis.

For evaluation by EVLP we included donor lungs with impaired gas exchange (PaO2 <350 mmHg), lungs with pulmonary edema, suspect of aspiration or bilateral infiltrates on chest X-ray. Although EVLP is mainly used in donation after cardiac death, our donors were brain death. The EVLP group had a mean out-of-body time of 664±128 min, which was significantly longer (P<0.05) than the average ischemic time (333±76 min) of the CSP group. Prolonged ischemic (out-of-body) times may have an impact on transplant outcome. However, duration of EVLP does not contribute to ischemic time as lungs are oxygenated and perfused with nutrients (13). No adverse outcome in the EVLP group was observed.

We found no significant differences for the postoperative mechanical ventilation time, length of ICU-stay or hospitalization between EVLP and non-EVLP transplants. So far, we did not observe anastomotic complications. The perioperative 30-day survival rates were excellent for both groups (12% vs. 2%, P=n.s.). Two patients died in the EVLP group due to multi organ failure after 1 and 37 days, the causes of death could not be attributed to the use of EVLP. These results are in concordance with other groups where EVLP survival rates compared to conventional lung recipients were significantly better and early and midterm results were not negatively affected by the use of EVLP (14).

Other positive aspects of EVLP are: donor leukocytes depleted during EVLP might reduce direct allorecognition and T-cell priming and therefore diminishes recipient T-cell infiltration into the graft. EVLP can be used to remove donor leukocytes, possibly a novel approach to tackle acute rejection (15). The higher PCT levels in the EVLP group may be reactive to cytokines released during the EVLP process.

The retrospective character and the small patient number especially in the EVLP group is a major limitation of this study. Furthermore the follow-up time is limited to the early postoperative period. In addition, the administration of CMV immunoglobulin post-transplantation may also lead to CMV sero-conversation, which should be considered as a possible confounding factor in our study. However, the influence of EVLP on post-transplant infectious situation and immunological impact is a field that needs to be further highlighted. This study can be seen as a first approach to this fascinating opportunity in transplantation.

Normothermic EVLP can safely be used in the evaluation of lungs initially considered unacceptable and did not negatively influence the CMV infection rate. Short term results are comparable to standard lung transplantation. This experience from a single center shows that transplantation of 76% of ECD lungs was possible.

Conflicts of Interest: All authors have completed the ICMJE uniform disclosure form (available at http://dx.doi.org/10.21037/jtd.2020.02.26). The authors have no conflicts of interest to declare.

Ethical Statement: The authors are accountable for all aspects of the work in ensuring that questions related to the accuracy or integrity of any part of the work are appropriately investigated and resolved. The study was approved by the Local Ethics Committee of the University Duisburg-Essen (15-6711-BO).