Standard and extended sleeve resections of the tracheobronchial tree

Anatomic resections with bronchial and/or vascular resections and reconstruction, so called sleeve resections were originally performed in patients with impaired cardio-pulmonary reserves. This technique enabled the avoidance of pneumonectomy. Later on, it was realized that pneumonectomy represents a disease itself (1). Nowadays, lung-sparing procedures are the treatment of choice also in patients without impaired cardiopulmonary reserves and advanced nodal disease whenever technically possible (2). In this review article we set out to provide a contemporary overview on this topic.

Definitions and types of sleeve resection 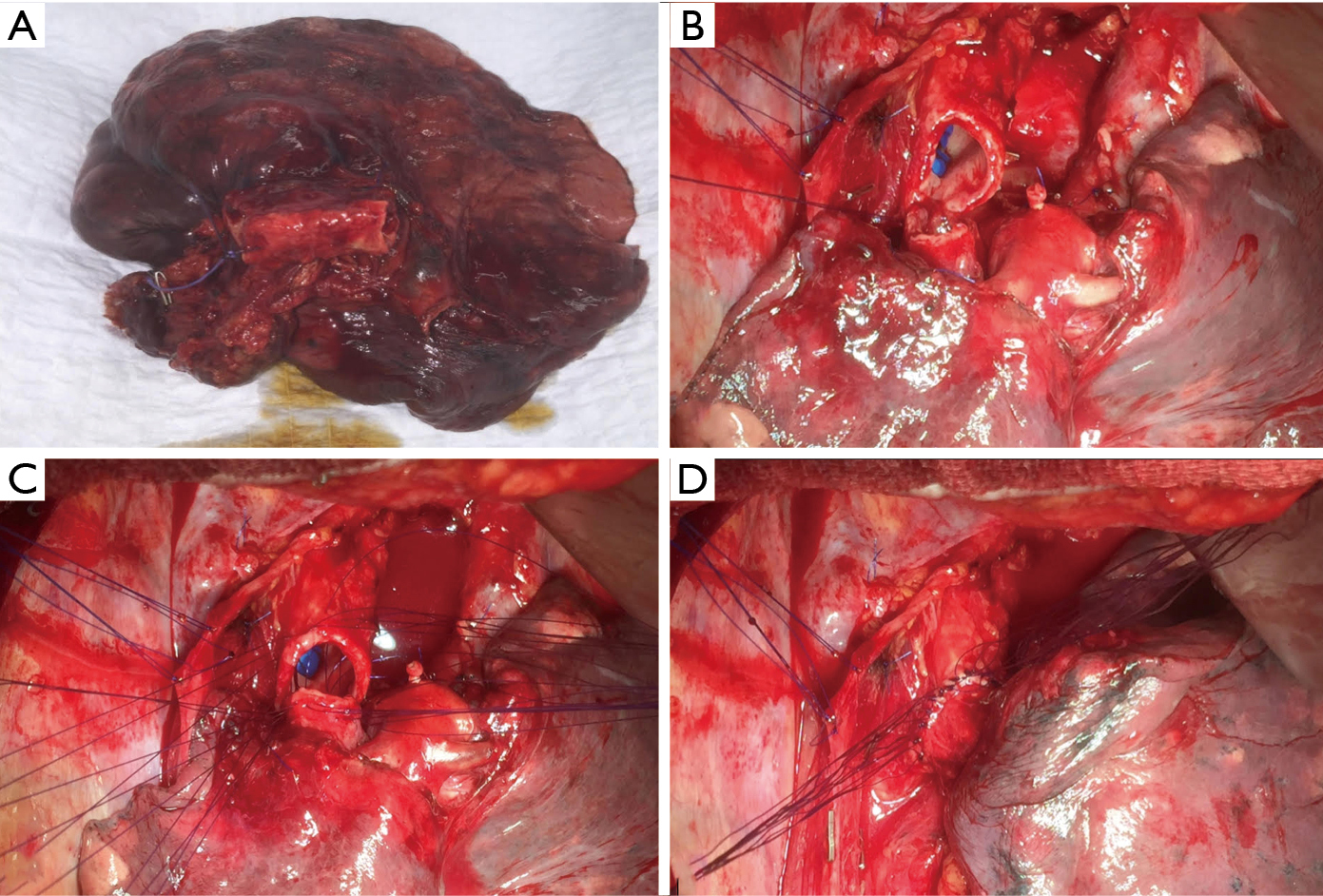 Resection of the upper and middle lobes (with or without segment 6) and anastomosis between the right main and the lower lobe bronchus (or basal segmental bronchus) (Figure 2C).

Resection of the upper lobe and superior segment of the lower lobe and anastomosis between the left main and basal segmental bronchi (Figures 2F,3). 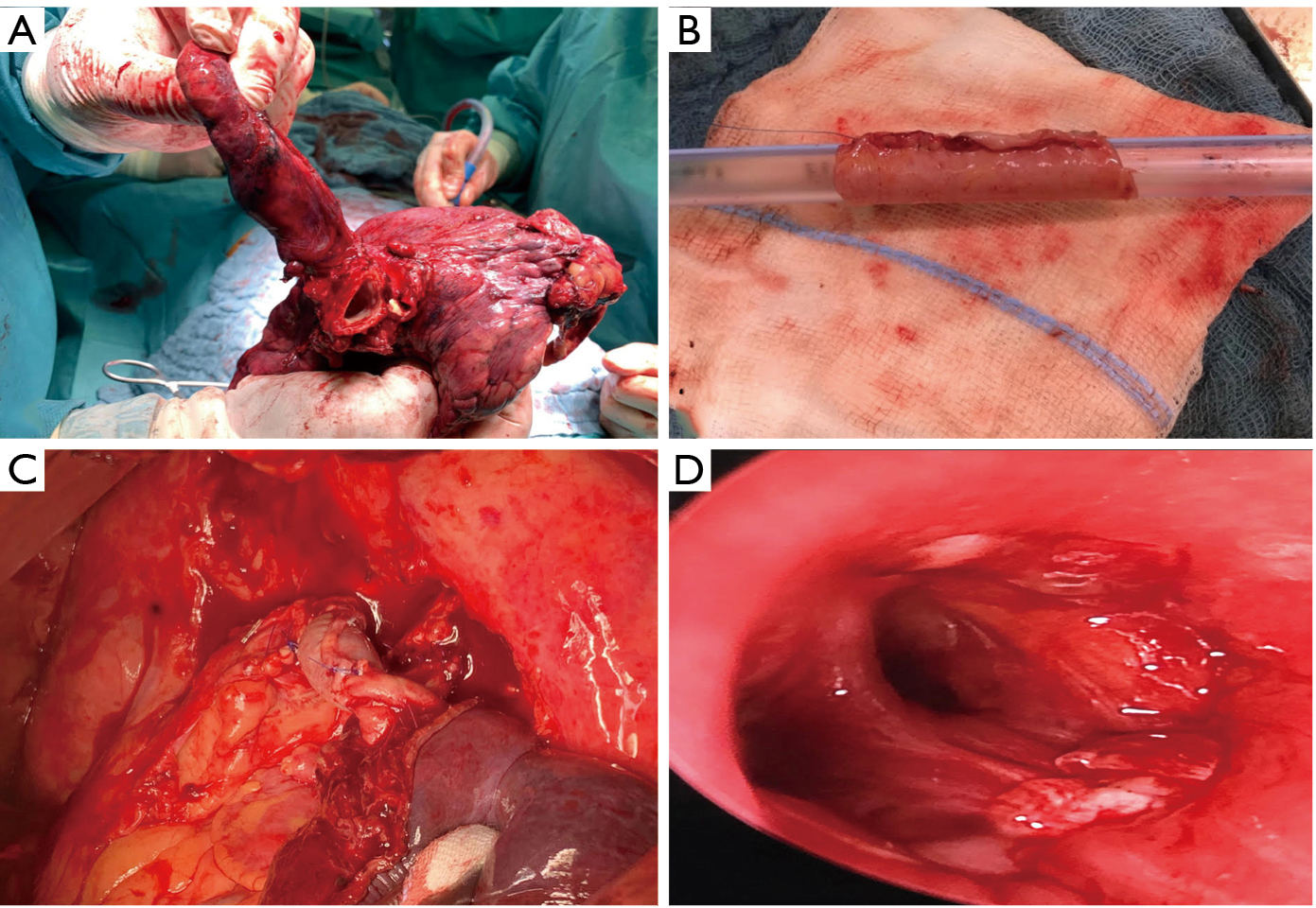 Resection of the lingular segment and lower lobe as well as anastomosis between the left main and upper division bronchi.

Resection of the middle and the lower lobe and anastomosis between the right main and superior bronchi (Figure 2B).

En-bloc resection of the middle lobe and segment 6 as well as anastomosis between the Bronchus intermedius and the basal segmental bronchus (Figure 4). 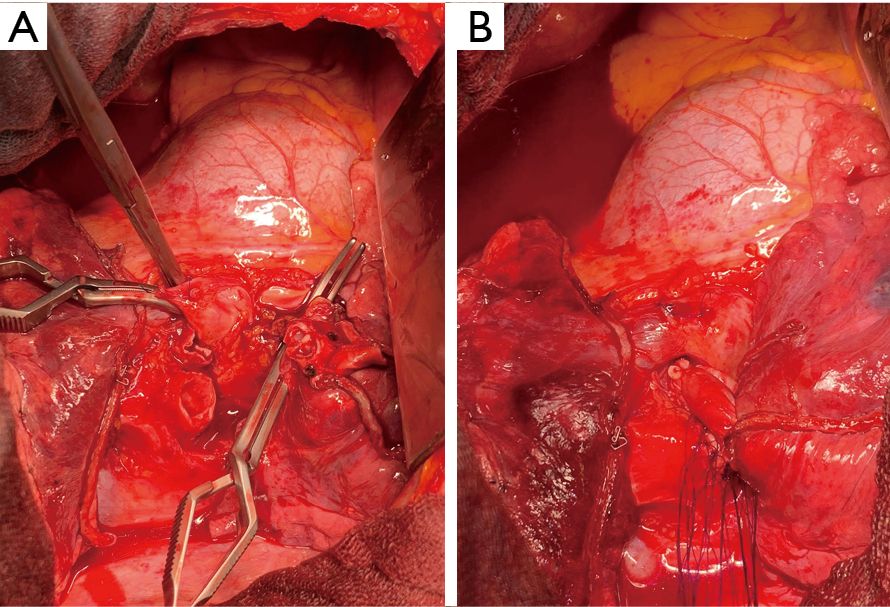 Figure 4 Extended double-sleeve resection type E according to Bölükbas et al. (A) Intraoperative view after en-bloc resection of the middle lobe and segment 6 of the lower lobe. (B) Bronchial anastomosis between Bronchus intermedius and the basal segmental bronchus as well as vascular anastomosis between main PA and basilar segmental arteries. PA, pulmonary artery.

❖ Pneumonectomy followed by ex situ sleeve resection and autotransplantation of lobe(s) or segment(s).

In some cases, isolated bronchial sleeve resections without the loss of lung parenchyma are indicated and feasible. The most common indication is a carcinoid tumor, but other malignant or benign tumors as well as trauma were also conceivable (8). The most common resections are as follows:

❖ Resection of the intermediate bronchus and end-to-end anastomosis.

However, there are many other possibilities for totally parenchyma-sparing bronchial sleeve resection (8).

Patients with centrally located limited disease lung cancer or other entities involving the carina can still be candidates for surgery. In these cases, the dissection of the distal trachea including the carina and reconstruction of the trachea and the main bronchus is necessary for a complete resection, so called sleeve pneumonectomy (Figures 2G,H,5). To avoid anastomotic tension, the limit of resection between the distal trachea and the main bronchus is considered to be 4 cm (9). 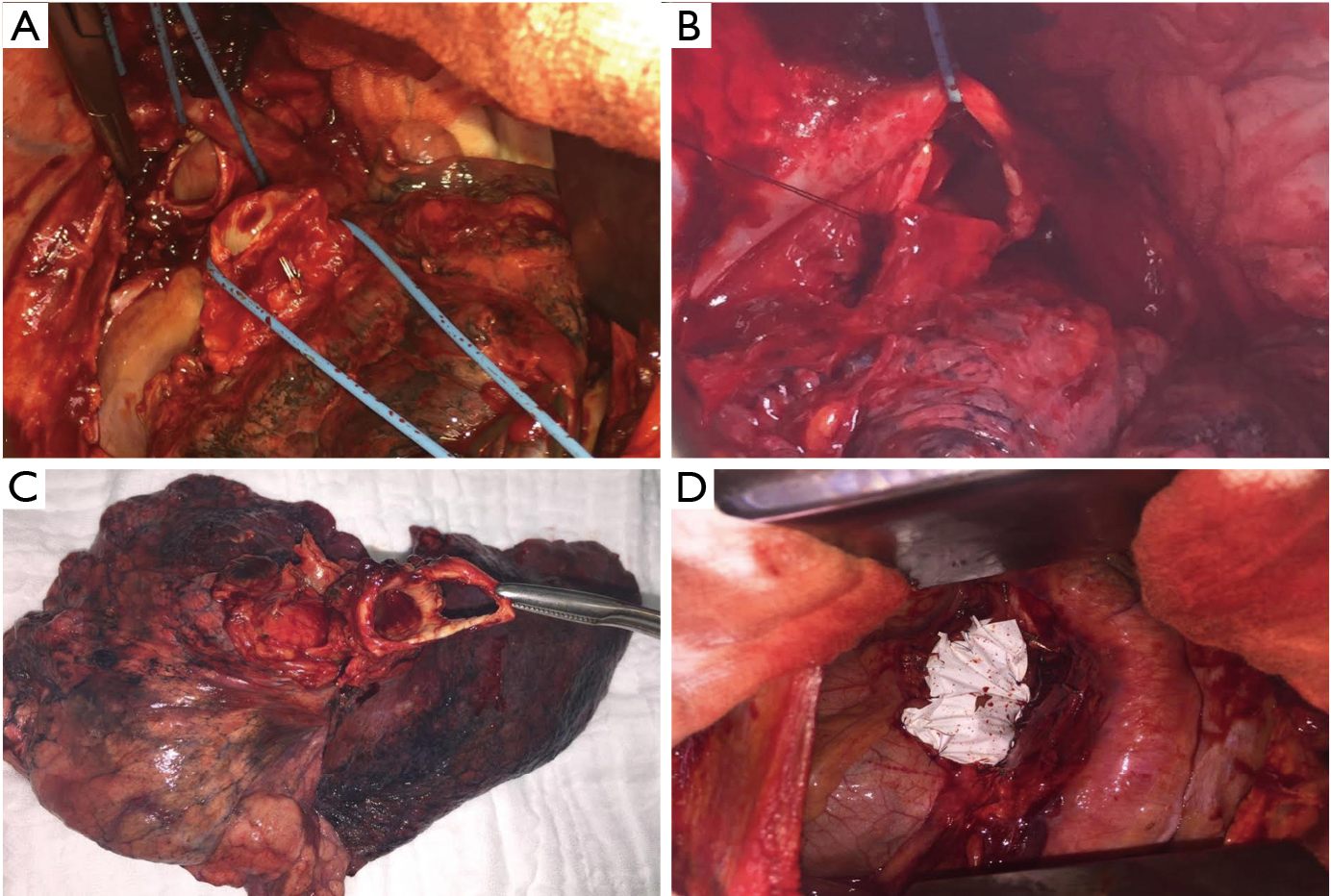 Figure 5 Left-sided sleeve pneumonectomy under veno-venous extracorporeal membrane oxygenation (ECMO). (A) Transsection of the right main bronchus via right thoracotomy. (B) Tracheo-bronchial anastomosis between the right main bronchus and distal trachea. (C) Specimen after completion of the sleeve pneumonectomy via left thoracotomy with view on the bifurcation and tumor in the left main bronchus. (D) Intraoperative view left-sided after prosthetic replacement of the pericardium.

Lung cancer or metastatic hilar lymph node involvement of the origin of the lobar bronchus and/or the PA are the most common indications for sleeve resections. It can also be necessary to perform a sleeve resection in case of pulmonary metastases, benign tumors as well as traumatic ruptures or posttraumatic or inflammatory strictures (10,11).

All patients should undergo preoperative cardiopulmonary evaluation (12). Inhalative preoperative treatment might enhance pulmonary function and reduce postoperative pulmonary complications in patients with newly diagnosed COPD during the preoperative assessment (13). After pulmonary rehabilitation, more patients might be considered fit for surgery and thus being able to receive optimal oncological therapy for lung cancer. An oncological staging is also important for patients undergoing oncological resection (11).

A bronchoscopy should be performed by the surgeon to evaluate the precise location of the tumor. In the setting of multimodality treatment including surgery, the bronchoscopy should be performed before and after neoadjuvant therapy, since a complete resection is important even if the tumor is no longer visible after neoadjuvant therapy. Special attention should be paid to patients with chronic use of steroids, patients with excessive dynamic airway collapse as well as neoadjuvant radiochemotherapy, since it might lead to impairment of anastomotic healing (14-16).

During the operation, maintaining adequate gas exchange is often quite demanding and close and effective cooperation between the anesthesiologist and the surgeon is necessary. Cross-field ventilation of the remaining bronchus as well as high-frequency jet ventilation can be used for oxygenation during the resection and reconstruction period (17). Extracorporeal membrane oxygenation (ECMO) has gained popularity in oncological airway surgery in recent years (18). However, the anesthetic considerations are reviewed elsewhere (19).

Techniques of tracheo-bronchial resection and anastomosis

No irreversible steps should be taken before resectability is confirmed. Thus, full intraoperative evaluation of intra- and extraluminal growth of the tumor, full mobilization and dissection of the involved bronchi and the branches of the PA, as well as intraoperative bronchoscopy are an essential condition sine qua non. For any type of sleeve resection, complete lymphadenectomy and hilar dissection should be performed before the phases of resection and reconstruction in order to avoid any traction and damage on the anastomosis in the late period of the surgical procedure. A semicircular pericardiotomy and the mobilization of the hilum allows easy creation of tension-free anastomosis. Nonetheless, skeletalizing the bronchus and possible impairment of the bronchial blood supply should be avoided. Importantly, possible thermal damage to the vascularization should be avoided by not using electrocautery near the bronchus.

The authors prefer a knife for the inter-cartilagilinar bronchial resection to obtain straight and well vascularized margins. However, other experts prefer an incision of the bronchus with a scalpel and completion of the bronchial resection with a scissor, especially in videothoracoscopic and robotic-assisted sleeve resections, respectively. Any rough edges or projecting cartilage should be trimmed. Intra-operative frozen section examination should be carried out to ensure tumor free margins.

If there is great discrepancy between the sizes of the bronchi, various surgical techniques might help to resolve the problem of high-caliber mismatch, especially in extended sleeve resections (5,21,22):

❖ Bronchial stump adaption (larger proximal bronchus is narrowed at the level of the pars membranacea).

Techniques of protection of anastomosis

Bronchial anastomotic dehiscence has an incidence of 5–8.7% after sleeve lobectomy (6). Dehiscence represents one of the major and often lethal complications after bronchial sleeve resection due to possible erosion of the adjacent PA and massive hemorrhage. Therefore, some authors recommend the protection of the bronchial anastomosis site. Various tissue has been used for the protection (23):

For all cases, the blood circulation of the used tissue has to be maintained and the thickness of the tissue has to be adequate not to compromise the adjacent PA. Contrary, there are advocates of unprotected bronchial anastomosis, even after induction treatment (2,24).

Techniques of resection and reconstruction of the PA

Full control over the PA (intra- or extra-pericardially) should be obtained whenever resection and reconstruction of the PA seem to be necessary. The PA should be mobilized to its origin to accommodate an atraumatic clamp. The authors’ preference is administration of Heparin i.v. (5,000 IU) prior to clamping the main PA. Other experts prefer lower dosage of heparin (1,500–2,000 IU) (26). The second clamp is placed distally to the planed resection of the PA to control back bleeding. We prefer the clamping of the pulmonary vein to have enough place for the planed procedure. 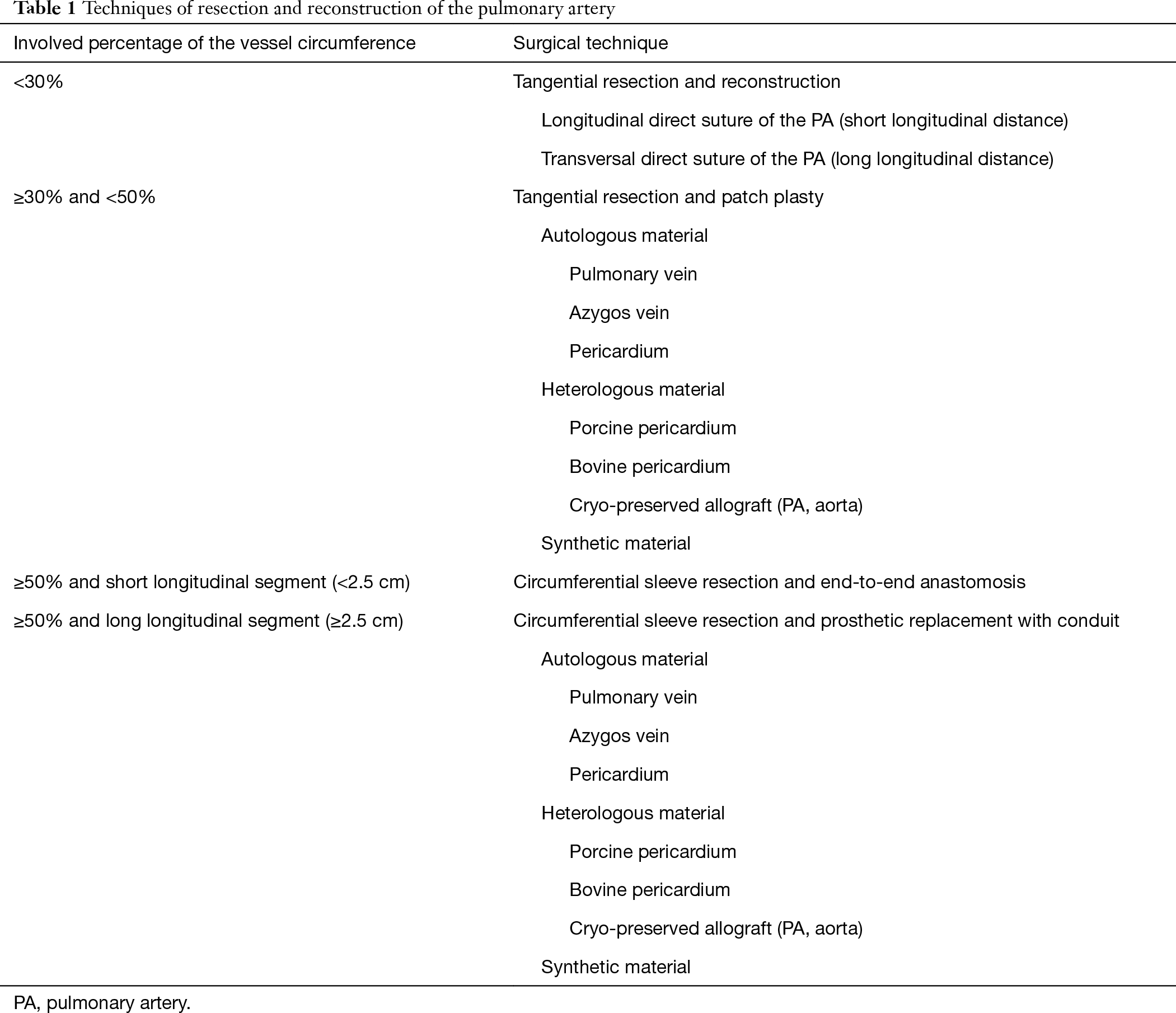 If the involved percentage of the vessel circumference is 330% and <50%, tangential resection and patch plasty represents the surgical techniques of choice. Circumferential sleeve resection and end-to-end anastomosis is carried out whenever the involved percentage of the vessel circumference is 350% and the resected longitudinal segment is short (<2.5 cm). Any size mismatch of the vessels can be accommodated by oblique division of the smaller vessel or by incising along the lumen of the distal vessel. In case of longer distances, there are different possibilities to achieve tension-free vascular anastomosis: release of the pulmonary ligament, mobilization of the hilum, pericardiotomy and intrapericardial dissection, respectively (11). The authors prefer the division of the Botalli ligament to bridge the necessary distance. Whenever the distance can’t be bridge with release maneuvers, prosthetic replacement of the PA with conduit might solve the problem (Figure 3). Different autologous and heterogenous as well as synthetic materials can be used for plasty and conduit as shown in Table 1 (29-34).

Arterial reconstructions and anastomoses are usually performed using running sutures (5-0 Prolene, Ethicon Inc., Norderstedt, Germany). In Case of conduit reconstruction, proximal anastomosis should be completed first. Second anastomosis should be finished after size adjustment of the conduit. Of note, arterial anastomosis is performed upon completion of the bronchial anastomosis in event of required bronchovascular sleeve resection. The special role of postoperative anticoagulation after reconstruction of the PA is unclear. On one hand, there is a risk of bleeding. On the other hand, there is the risk of clotting and lung infarction at the PA reconstruction site. Therefore, some authors recommend low-dose heparinization during the hospitalization. Anyway, postoperative anticoagulation prophylaxis is required for the prevention of venous thromboembolism after lung cancer surgery for 4 weeks according to guidelines, irrespective of reconstruction of the PA (35).

Due to interruption of parasympathic nerves and lymphatic vessels, sleeve resection is associated with hypersecretion of mucus and impaired mucociliary clearance (36). Before extubation, a bronchoscopy should be performed for endobronchial clearance as well as anastomosis inspection. However, the patients should be extubated following the operation. Depending on the extend of the resection, residual pleural space management might be important.

During the postoperative course, bronchoscopy should be performed in case of retention of secretions and to monitor the healing of the anastomosis (37). Anastomotic complications like necrosis, micro-fistula or dehiscence can be detected during bronchoscopy. After sleeve lobectomy, anastomotic dehiscence usually leads to a secondary pneumonectomy. Completion pneumonectomy is a high-risk procedure and is characterized by high mortality rates (11). Bölükbas et al. reported the first case of a secondary sleeve resection of the lingula and anastomosis between the left main bronchus and the apical trisegment group (B1-3) following bronchial anastomotic dehiscence after left lower lobe sleeve resection to avoid a secondary pneumonectomy (38). However, prophylaxis, further postoperative complications, classifications and management of the complications are reviewed by Ludwig et al. (39).

In a meta-analysis of almost 3,000 patients, sleeve lobectomy was associated with better outcomes compared to pneumonectomy in terms of operative mortality (3% vs. 6%), locoregional recurrence (17% vs. 30%) and five-year survival (50% vs. 30%), respectively (40). Quality of life and functional outcomes play an important role for the patients faced to various treatment options in case of lung cancer. Analyses of quality of life are in favor of sleeve resections compared to pneumonectomy (41,42). Furthermore, sleeve lobectomy was favored with regard to quality-adjusted life years in a meta-analysis with 99 investigated studies comparing pneumonectomy to sleeve resections (43). In this context, many studies have proven that sleeve lobectomy is associated with less loss of pulmonary function after sleeve lobectomy (44,45).

We thank Dr. Uwe Bauer for drawing the schematic representation of selected sleeve resections of the bronchus.

Provenance and Peer review: This article was commissioned by the Guest Editor (Servet B.lükbas) for the series “Airway Surgery”, published in Journal of Thoracic Disease. This article has undergone external peer review.

Conflicts of Interest: All authors have completed the ICMJE uniform disclosure form (available at http://dx.doi.org/10.21037/jtd.2020.02.65). The series “Airway Surgery” was commissioned by the editorial office without any funding or sponsorship. SB served as the unpaid Guest Editor for the series and serves as the unpaid editorial board of Journal of Thoracic Disease from Nov 2018 to Oct 2020. The other authors have no other conflicts of interest to declare.