Approximately 20% of all non-small cell lung cancer (NSCLC) is stage IIIA-N2 (1). Those patients are heterogeneous in terms of disease extent and survival. Treatment options included induction chemotherapy or concurrent chemoradiotherapy (CCRT) followed by surgery, or definitive CCRT (2-7). The optimal strategy for IIIA-N2 NSCLC remains controversial and no treatment is clearly recommended (8,9).

The overall prognosis of IIIA NSCLC is still poor, with a median survival time of 14–25 months despite multimodal therapy. Many patients develop local or distant recurrence eventually many patients develop local and distant recurrence (8-11). Additional adjuvant therapy may be needed to control the disease, although the benefit of adjuvant treatment after multimodal therapy is doubtful owing to the considerable toxicity of each therapy (12).

We retrospectively reviewed the medical records of all patients who underwent surgery for NSCLC with curative intent surgery at the Samsung Medical Center a 1,961-bed referral hospital in Seoul, South Korea, between January 2004 and December 2013. During this period, 467 patients underwent neoadjuvant CCRT followed by surgical resection for stage IIIA-N2 NSCLC. Of these, patients who received CCRT at our institution and followed by complete resection with systematic lymph node (LN) dissection were included in this study population. Exclusion criteria were summarized in Figure 1. Ultimately, 398 patients were included: 102 patients did not receive the adjuvant therapy after surgery (no-therapy group) and 296 patients received adjuvant treatment including chemotherapy (n=71), radiotherapy (n=118) or chemoradiotherapy (CRT) (n=107) (therapy group). To review and publish the information obtained from patient records, the study was given approval by the Institutional Review Board of Samsung Medical Center (IRB No. 2015-05-143).

Neoadjuvant CCRT included chemotherapy and concurrent thoracic radiotherapy. The therapeutic regimens of were different according to year of administration. Before October 2009, radiation therapy was delivered to patients with a total dose of 45 Gy (1.8 Gy/fraction/day) over 5 weeks. From October 2009 and thereafter, radiation dose was 44Gy (2.0 Gy/fraction/day) over 4.5 weeks using 10-MV X-rays. The chemotherapy regimen mostly consisted of weekly paclitaxel (50 mg/m2 per week, iv) or docetaxel (20 mg/m2 per week, iv) plus cisplatin (25 mg/m2 per week, iv) or carboplatin (AUC 1.5/week, iv) for 5 weeks.

Surgical resection was scheduled at 4–6 weeks following the completion of neoadjuvant CCRT. Operative procedures included lobectomies, bilobectomies, or pneumonectomies as indicated. Mediastinal LN dissection consisted of en bloc resections of all nodes at stations 2R, 4R, 7, 8, and 9 and 10R for a right-sided tumor and 4L, 5, 6, 7, 8, and 9 and 10L for a left-sided tumor.

Postoperative treatment was decided using multidisciplinary team approach after considering the extent of disease and general condition of each patient. Postoperative treatment included chemotherapy (taxane or vinorelbine, combined with platinum), radiotherapy (18 Gy in 10 fraction), CRT or no treatment. Patients were regularly evaluated by chest CT scans every 3 to 4 months for the first 2 years following surgery and every 6 months thereafter. Patients were annually evaluated by PET/CT scans for detection of recurrence. 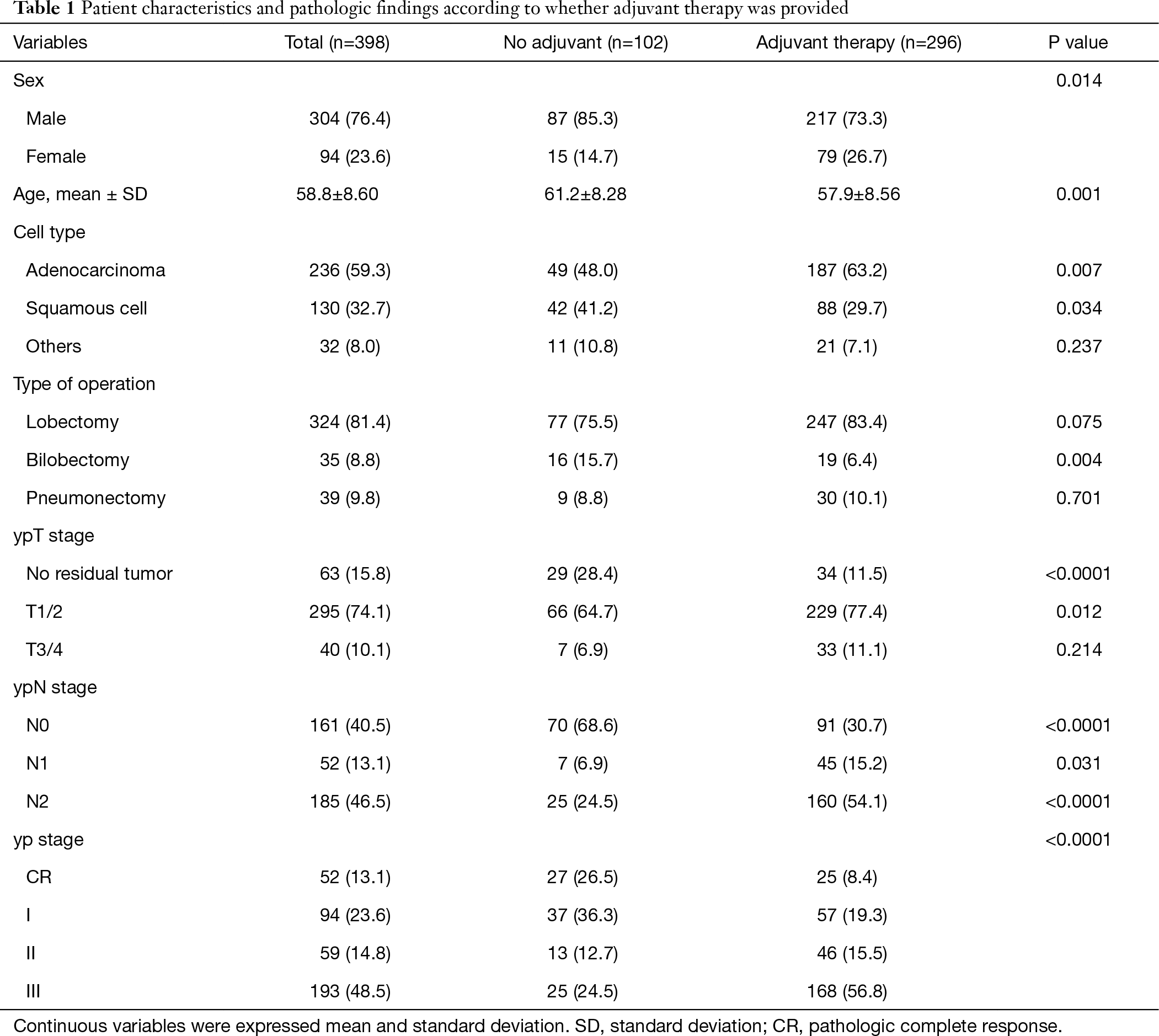 Pathologic response according to adjuvant therapy

As shown in Table 2, age, sex and histologic type were similar across the type of adjuvant therapy, whereas ypN stage (for N0, P=0.037; for N2, P=0.003) and overall yp stage (P=0.009) were significantly higher in the radiotherapy or CRT groups compare to the chemotherapy group. 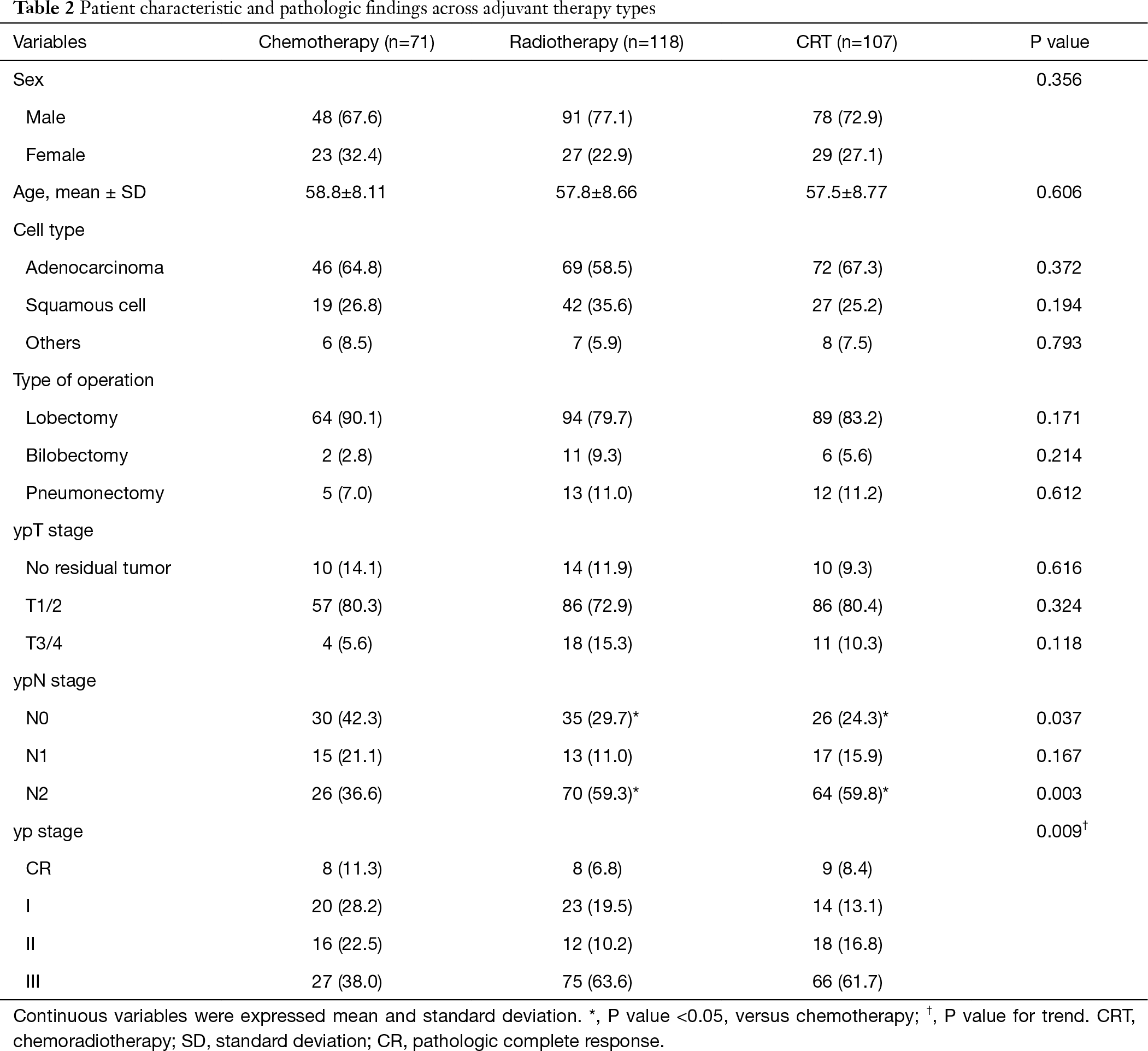 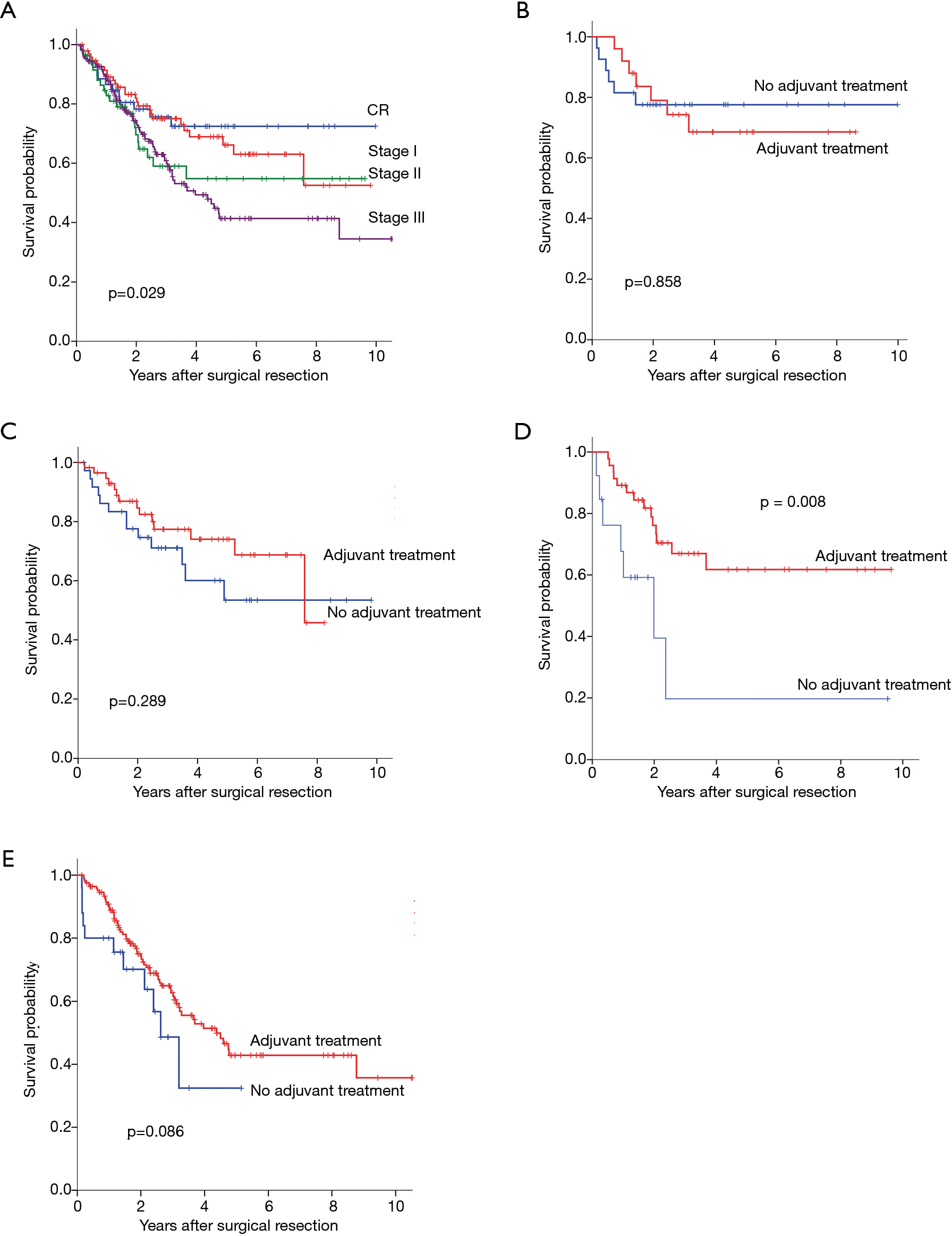 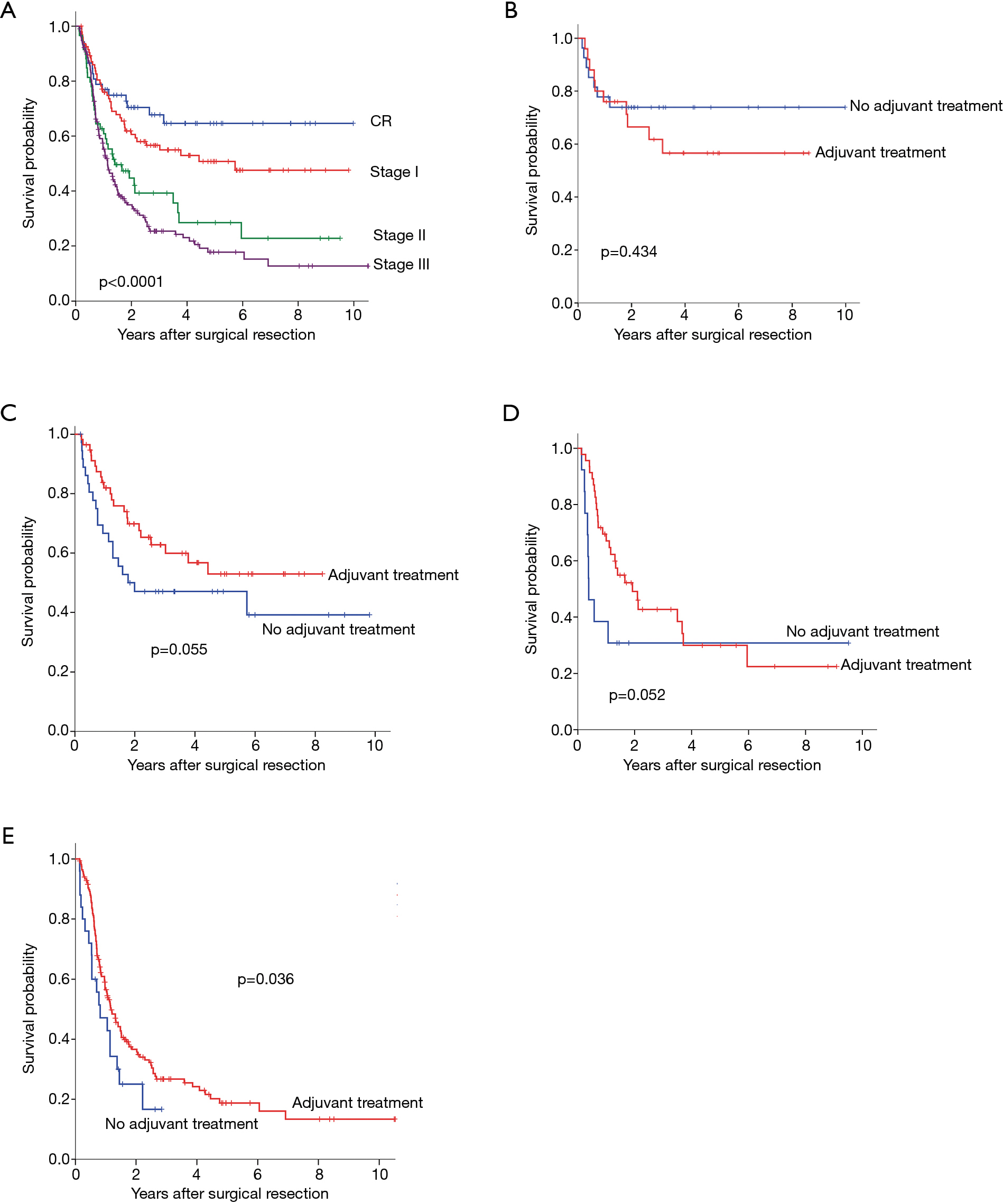 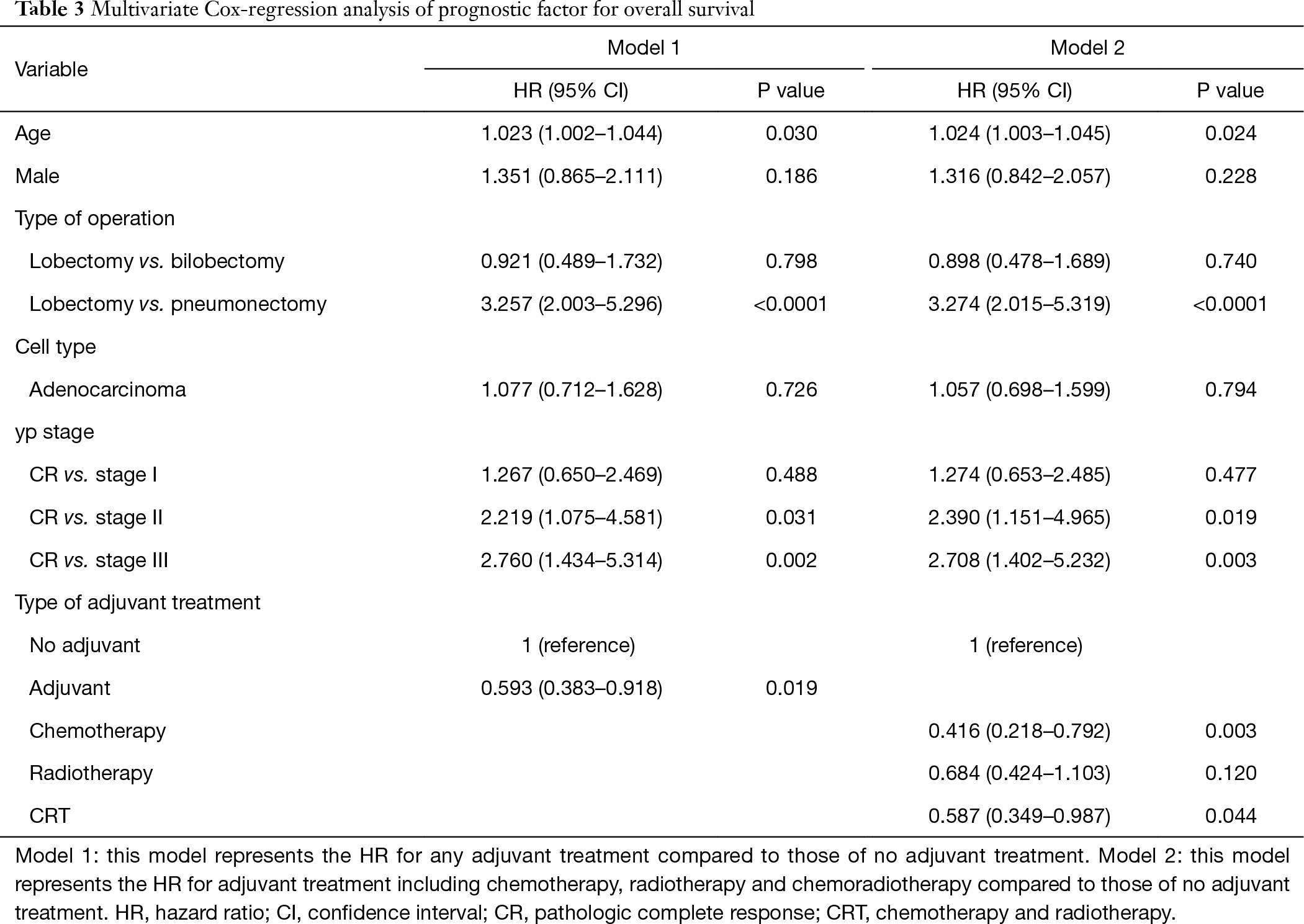 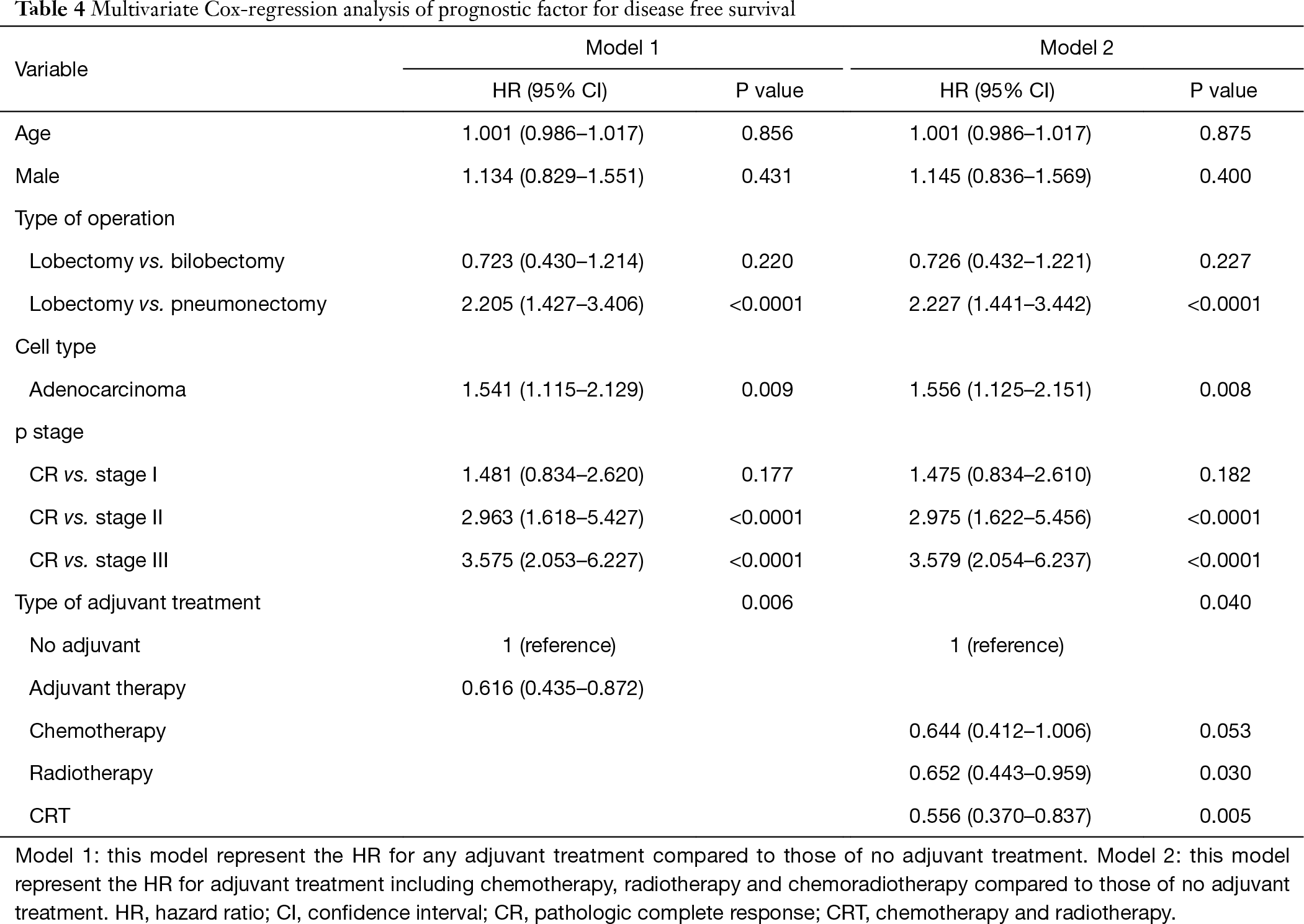 Several factors have been described to predict survival after neoadjuvant treatment followed by surgery. Mediastinal downstaging and regression of the primary tumor is associated with improved survival compared with patients with residual N2 disease (8,9,13-18). Previously, we obtained a similar result; the ypN stage was significant prognostic factor of OS ad DFS (19). Single node station, minimal N2 disease and decrease in intensity of uptake on PET scan are also considered favorable prognostic factors (8,9,20,21).

Cisplatin-based adjuvant chemotherapy has become the standard for patients with completely resected stage II or III NSCLC (22-24). Postoperative radiotherapy is controversial and not recommended routinely for patients with completely resected N2 NSCLC. A study based on the Surveillance, Epidemiology, and End Results (SEER) database and Adjuvant Navelbine International Trialist Association (ANITA) trial demonstrated the benefit of postoperative radiotherapy for N2 disease after surgical resection (25,26). However, for patients who underwent neoadjuvant CCRT, the role of adjuvant chemotherapy or radiotherapy was not known.

To the best of our knowledge, this is the first investigation to document the impact of adjuvant therapy for patients who underwent trimodal therapy for stage IIIA-N2 NSCLC. The overall 5-year OS was 54%, and according to ypN stage, the OS in patients with N0, N1 and N2 disease was 65.8%, 58.5% and 40.8%, respectively. These outcomes are quite favorable compared to the reported survival rate of patients with ypN2 disease of 9–29% (4,6,9,27-29).

There are several limitations to our study. First, this retrospective study was conducted at a single referral center. Second, the administration of adjuvant therapy was decided case-by- case using multidisciplinary team approach, and was not based on the consistent guideline. Patients who expected to have relatively better outcomes were selected at the discretion of the treating physicians and surgeons, possibly biasing the outcome. Therefore, the adjuvant therapy group might have consisted of patients with relatively better performance status, which can influence OS. Therefore, our results should be interpreted carefully. We tried our best to improve internal validity, limiting the study to patient who completed the treatment in the same institution and only including cases who had undergone complete resection. However, surgical candidates with N2 disease are relatively rare and considering heterogeneity of N2 disease, it is difficult to conduct a well-designed randomized controlled trial. Our real-world practice provides some evidence for further investigations.

In conclusion, administration of adjuvant therapy following trimodal therapy was a significant prognostic indicator of OS and DFS. To confirm our results, better-designed prospective study is required.

Conflicts of Interest: All authors have completed the ICMJE uniform disclosure form (available at http://dx.doi.org/10.21037/jtd.2020.03.23). The authors have no conflicts of interest to declare.

Ethical Statement: The authors are accountable for all aspects of the work in ensuring that questions related to the accuracy or integrity of any part of the work are appropriately investigated and resolved. The study was given approval by the Institutional Review Board of Samsung Medical Center (IRB No. 2015-05-143).