Chronotropic incompetence (CI) is broadly defined as the inability of the heart to increase its rate commensurate with increased activity or demand (1). The traditional equation used to predict maximal heart rate (HR) is 220 beats/minute – age (2,3). The definition of CI is not standardized among literature, though according to most definitions it is diagnosed when, during an incremental dynamic exercise test, HR fails to reach an arbitrary percentage (85%, 80% or less commonly 70%) of the age-predicted maximal HR (4-6).

Lung carcinoma is one of the tumours with the highest mortality and morbidity (7,8) and in patients with stage I, II and IIIA of non-small cell lung cancer surgical resection is the preferred method of treatment (9).

As a necessary part of the preoperative evaluation, patients are initially examined by pulmonary functional test. The standard part of the evaluation is the measurement of forced expiratory volume (FEV1) and lung diffusion capacity (TLCO) (10-12).

Patients with an FEV1 and TLCO >80% of the predicted values are able to undergo lung resection up to the extent of a pneumonectomy (10). Otherwise, if these values are not met, cardiopulmonary exercise testing (CPET) is indicated (13).

According to the most recent functional algorithm published by the American College of Chest Physicians (11) patients with a maximum oxygen consumption (VO2max) lower than 10 mL/kg/min or 35% of predicted, indicate a high risk for major anatomic resection. Conversely, VO2max values greater than 20 mL/kg/min or 75% of predicted, indicate low risk. The importance of the role of high technology exercise testing is supported by European guidelines (10) and a meta-analysis, which confirmed the importance and the ability of VO2max in predicting cardiopulmonary complications or mortality after pulmonary resection (14). Most of the studies agreed that a VO2max value below 10–15 mL/kg/min was to be regarded as a high-risk threshold for lung resection and that values above 20 mL/kg/min are safe for any kind of resection, including pneumonectomy (13).

However, the guidelines aforementioned do not mention the possibility that VO2max could be decreased by CI in patients. This could influence the result of the preoperative examination and the estimation of the postoperative risk of complications. The aim of this study was to evaluate the prevalence of CI in patients indicated for lung surgery and its possible effect on CPET parameters.

This study enrolled 154 consecutive patients (97 men) of average age 66.4±8.3 with newly diagnosed lung cancer indicated for lung surgery. In all patients, physical examination with the measurement of anthropometric parameters was performed.

All patients underwent CPET (cycle ergometry) using Vyntus CPET device. The CPET was performed 2 hours after a light meal, with patients having taken all their regular medication.

SPSS software version 15.0 (SPSS Inc., Chicago, USA) was used for statistical analysis. Spearman’s correlation analysis was carried out to evaluate the relationship between CI, beta-blocker status and other baseline variables. The normality of distribution was checked by the Shapiro-Wilk test. P<0.05 was considered statistically significant.

This study was approved by University Hospital and Faculty of Medicine and Dentistry, Palacky University Olomouc Ethics Committee as a number 39/19 and participants signed the Informed consent form.

Baseline clinical characteristics together with exercise test parameters are shown in Table 1. 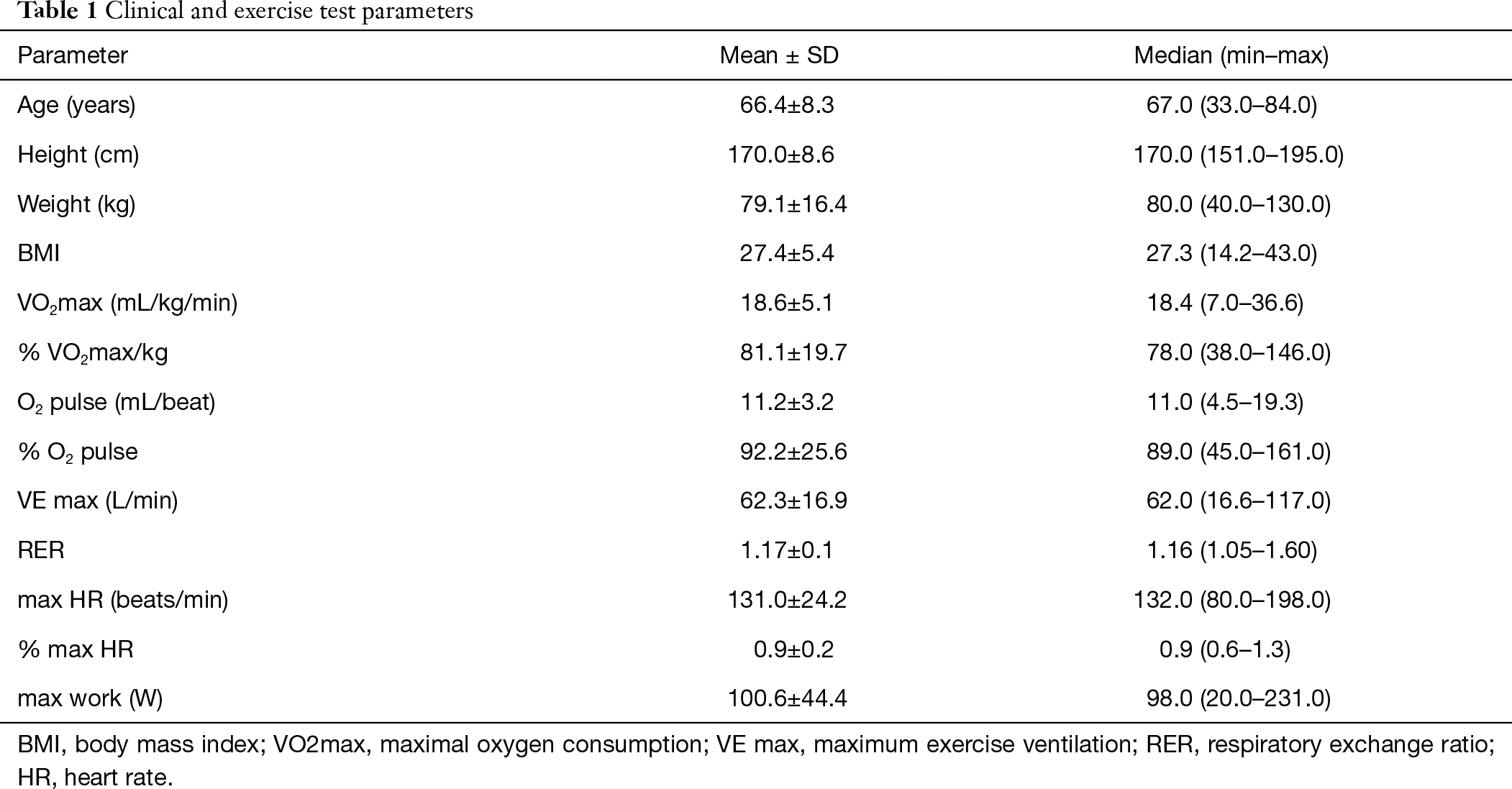 A significant negative correlation was found between VO2max, maximal HR and maximal work load among all CI groups (Table 2).

A total of 53 patients (34.4%) were being treated with beta-blockers. Indications for beta-blocker treatment are shown in Table 3.

Results of the Chi quadrate test and Mann-Whitney U test are presented in Tables 4-6.

The increase in VO2 is achieved by a 2.2-fold increase in HR, a 0.3 fold increase in stroke volume and a 1.5 fold increase in arteriovenous oxygen difference (15). Therefore, it is obvious that CI is the most important cause of VO2 reduction. The clinical importance of CI outweighs the simple reduction of exercise tolerance and possible reduced quality of life. CI could also be the cause of worsened mortality and morbidity of patients.

The prevalence of CI in the general population is not known, with reported prevalence of CI in literature ranging between 9–89% (1). The reason for such a wide range in results is the obvious non-homogeneity of the definition of CI (differing equations and percentages of predicted HR).

Some data on CI in patients with chronic heart failure is available, where it is estimated to be between 25–70% (1) and in patients indicated for liver transplantation, CI is present in 50% (16).

Abbot et al. found that CI occurred in 29.9% of patients with a myocardial injury after noncardiac surgery (17).

Data concerning CI in patients before lung resection is missing and this is the first study to address this.

This study has found the prevalence of CI to be high at 48.7%; 39.6% and 16.9%; respectively according to the different definitions (85% HRpred; 80% HRpred; 70% HRpred), which is almost the same prevalence like in patients with chronic heart failure. If we consider that these patients are indicated for surgery, such a high level of CI seems to be clinically relevant.

In the past decades, several studies evaluated CI as a risk factor of different diseases. Hinkle et al. was the first to report the relationship between CI and increased cardiac and all-cause mortality (18) and patients with CI have an increased risk for developing atrial fibrillation (19).

CI is considered to be a negative prognostic risk factor in patients with chronic obstructive pulmonary disease (COPD) (20) though an improvement in CI was also found in COPD patients with severe emphysema after lung volume reduction surgery (21).

CPET is an essential part of the preoperative evaluation (10,11,13) of patients before lung cancer surgery and based on VO2 peak the overall risk is estimated.

The most important finding of this study is the decrease in the exercise tolerance of patients with CI in comparison with other subjects (and CI influence on VO2 peak is not reflected in current guidelines). This study found that not only maximal oxygen consumption but also maximal ventilation and work load were significantly reduced.

CI correlated with age. It is known that the resting HR is not variable throughout life, but there is an age-related decrease in maximum HR (1)—this effect was expected.

The presence of CI in this study strongly correlated with beta-blocker treatment, as was confirmed by previous studies (22), which could be an important consideration for the future evaluation of patients before lung cancer surgery. Also, in the group treated with beta-blocker a significant reduction in VO2 peak was found which supports the finding that beta-blocker induced CI reduces VO2 peak.

The next most common indication for beta-blocker use was ischemic heart disease. Generally, beta-blockers are considered to be an important part of the treatment of patients post myocardial infarction. However, data supporting its usage is derived from studies performed in the so-called ‘Pre-reperfusion era’. According to the review by Hong et al. (24) in the absence of a contemporary randomized control trial, this evidence imparts uncertainty regarding the current standard of care and suggests that it may be reasonable to discontinue use of beta-blockers in patients without impaired left ventricular function at 1-year post-myocardial infarction, who do not have another indication for their use. Therefore, in many cases could beta-blockers withdrawal or dose-reduction decrease CI level.

In this study, patients with CI were found to have significantly lower VO2max, which is an important part of the preoperative evaluation. Thus, it is possible that in a large group of patients’ CI is pharmacologically induced, leading to a reduction in overall exercise tolerance. In such patients, the estimated postoperative risk is calculated to be higher than the actual risk. In extreme cases, these patients will be disqualified from getting the lung resection and thus their prognosis will be worsened. Mainly in patients with arterial hypertension as an indication for beta-blockers, should a change in treatment and a repeat of the exercise examination be considered.

This study has several limitations. In patients with CI and beta-blocker treatment a second subsequent CPET was not performed following the reduction or withdrawal of the medication so we are not able to prove that with the substitution or withdrawal of beta-blocker the level of CI will be reduced. On the other side, this effect is highly expected.

A new study is now under consideration to address the possible restoration of CI after beta-blocker withdrawal.

In the future, larger studies are needed to consider changes to the current guidelines in which CI will be addressed.

CI significantly decreases VO2max in patients before lung cancer surgery. It is strongly associated with beta-blocker treatment, which could negatively influence risk assessment. It is a matter for future discussion whether the evaluation of CI should be part of the preoperative care guidelines.

We would like to thank Dr. Zapletalova for statistical analysis.

Conflicts of Interest: All authors have completed the ICMJE uniform disclosure form (available at http://dx.doi.org/10.21037/jtd.2020.03.24). The authors have no conflicts of interest to declare.

Ethical Statement: The authors are accountable for all aspects of the work in ensuring that questions related to the accuracy or integrity of any part of the work are appropriately investigated and resolved. This study was approved by University Hospital and Faculty of Medicine and Dentistry, Palacky University Olomouc Ethics Committee as a number 39/19 and participants signed the Informed consent form.