Impact of fractional exhaled nitric oxide on the outcomes of lung resection surgery: a prospective study

Lung resection is indicated for several conditions, including curative resection for lung cancer and limited resection for diagnostic purposes. It has become less invasive owing to advancement in surgical procedures. However, patients with respiratory comorbidities are susceptible to loss of function after surgery and a high proportion of postoperative complications. Therefore, risk assessment and perioperative management are essential, depending on the disease.

Some studies in patients with interstitial pneumonia have reported the efficacy of perioperative pirfenidone. They also reported that sialylated carbohydrate antigen (KL-6) levels and the diffusing capacity of carbon monoxide are poor prognostic factors (1-3). However, few conventional indicators are available for chronic obstructive pulmonary disease (COPD), which has a higher prevalence, and further universal risk factors should be investigated.

The novel concept of asthma-COPD overlap has been proposed recently, which presents with a combination of the features of chronic lung disease. Airway inflammation has been studied with respect to its contribution to disease progression (4). Airway inflammation is quantified using fractional exhaled nitric oxide (FeNO), which is widely used in daily practice, because it can be easily measured (4), but its impact on lung resection remains unknown.

This single-center, prospective study was conducted at Shiga University of Medical Science Hospital and was approved by the appropriate institutional review boards (protocol number 29-175). Written informed consent was obtained from each participant.

This study included adult patients younger than 90 years of age, who underwent elective lung resection at the Department of General Thoracic Surgery, Shiga Medical University of Medical Science (Shiga, Japan) between September 2017 and March 2019. We measured FeNO in participants who provided informed consent, in addition to routine preoperative blood, physiological function, and imaging tests. The exclusion criteria were as follows: patients aged under 20 years, those with a history of treatment for infection within the past 1 month, those suspected of active pulmonary infection on admission, those using immunosuppressants, and patients in whom FeNO examination could not be performed satisfactorily.

The participants’ airway inflammation and subjective symptoms were evaluated once before and on days 1, 3, 5–7 after surgery, for a total of 4 times. Airway inflammation was measured as FeNO using NIOX VERO® (NOV, Aerocrine, Solna, Sweden). Measurements were made during the day, except for 2 hours after meals and after waking up. We simultaneously interviewed patients regarding their symptoms, which were recorded with the COPD assessment test (CAT) (5) using only 3 items (cough, sputum, dyspnea) from the CAT questionnaire, considering the patients’ inconvenience after surgery. The total score of the modified CAT was 21.

The primary endpoint was the relationship between postoperative morbidity in the hospital and preoperative FeNO. The Clavien-Dindo and postoperative pulmonary complications (PPCs) classifications were used to evaluate morbidity (6,7). Major complications were defined as grade 3 or higher on the Clavien-Dindo classification. One of the secondary endpoints was to clarify the perioperative dynamics of airway inflammation. Postoperative FeNO levels were described with respect, to preoperative levels, and the difference was analyzed. Another secondary endpoint included the investigation of the relationship between increased airway inflammation and respiratory events comprising additional medical treatment within 30 days and readmission within 90 days of surgery.

Statistical analysis was performed using SPSS software, version 22.0 (IBM, Inc., CA, USA). All continuous values were expressed as mean ± standard deviation (SD). The peak value of postoperative FeNO was used as the representative value, when it was used as a variable during statistical analysis. A multivariate logistic regression model was used to analyze the predictors of postoperative complications and additional respiratory-event related treatment. Baseline variables with P values <0.250 obtained from univariate analysis were included in the multivariable models. The chi-squared test was used for comparing categorical variable. The t-test and Mann-Whitney’s U test were used for comparing continuous variables. Pearson’s correlation coefficient and linear regression analysis were used to determine the relationship between postoperative FeNO levels and the modified CAT score. P values <0.05 were considered to be statistically significant.

Figure 1 summarizes the patients who participated in this study (n=105). The characteristics of all patients are presented in Table 1. Men were predominant in the study population. The proportion of primary lung cancer was the highest. The percentage of the anatomical lung resection approach was 87%. None of the patients required extended surgery owing to intraoperative findings. Lobectomy was performed as radical surgery for lung cancer, and segmentectomy and wedge resection were adopted as conservative approaches for diagnosis or treatment. 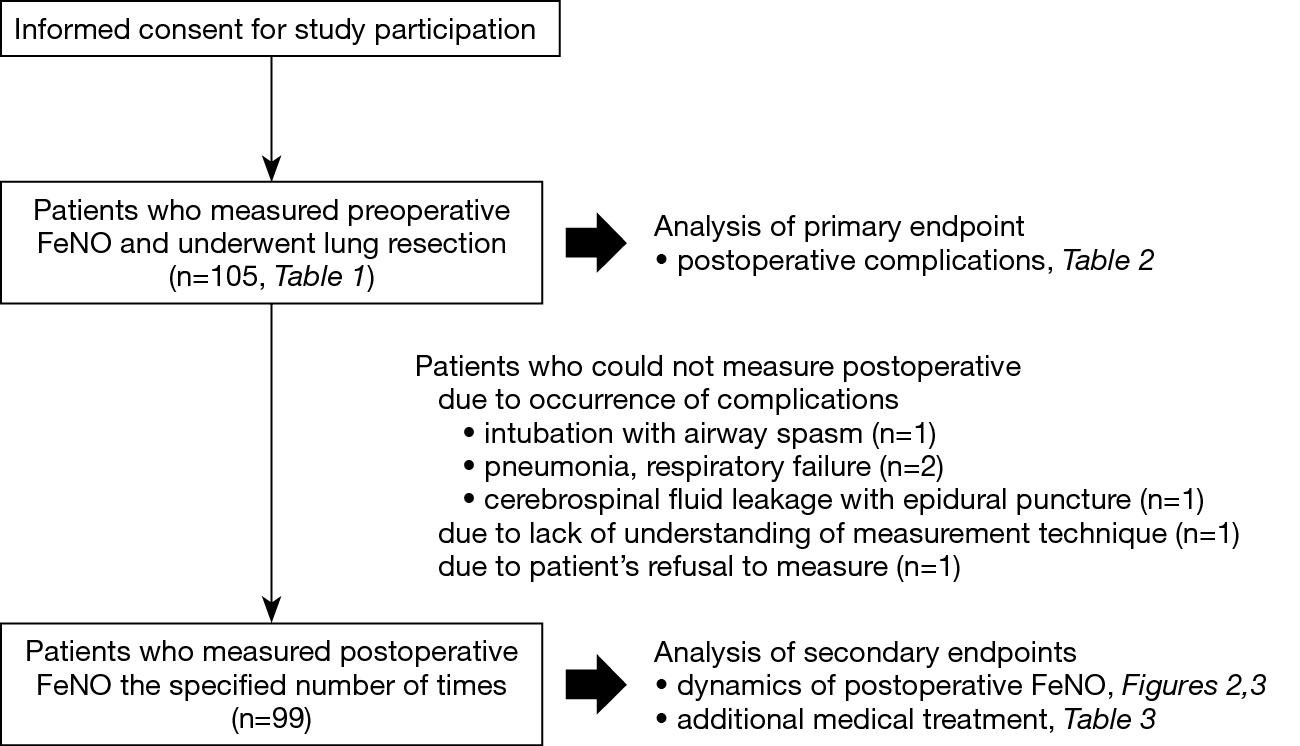 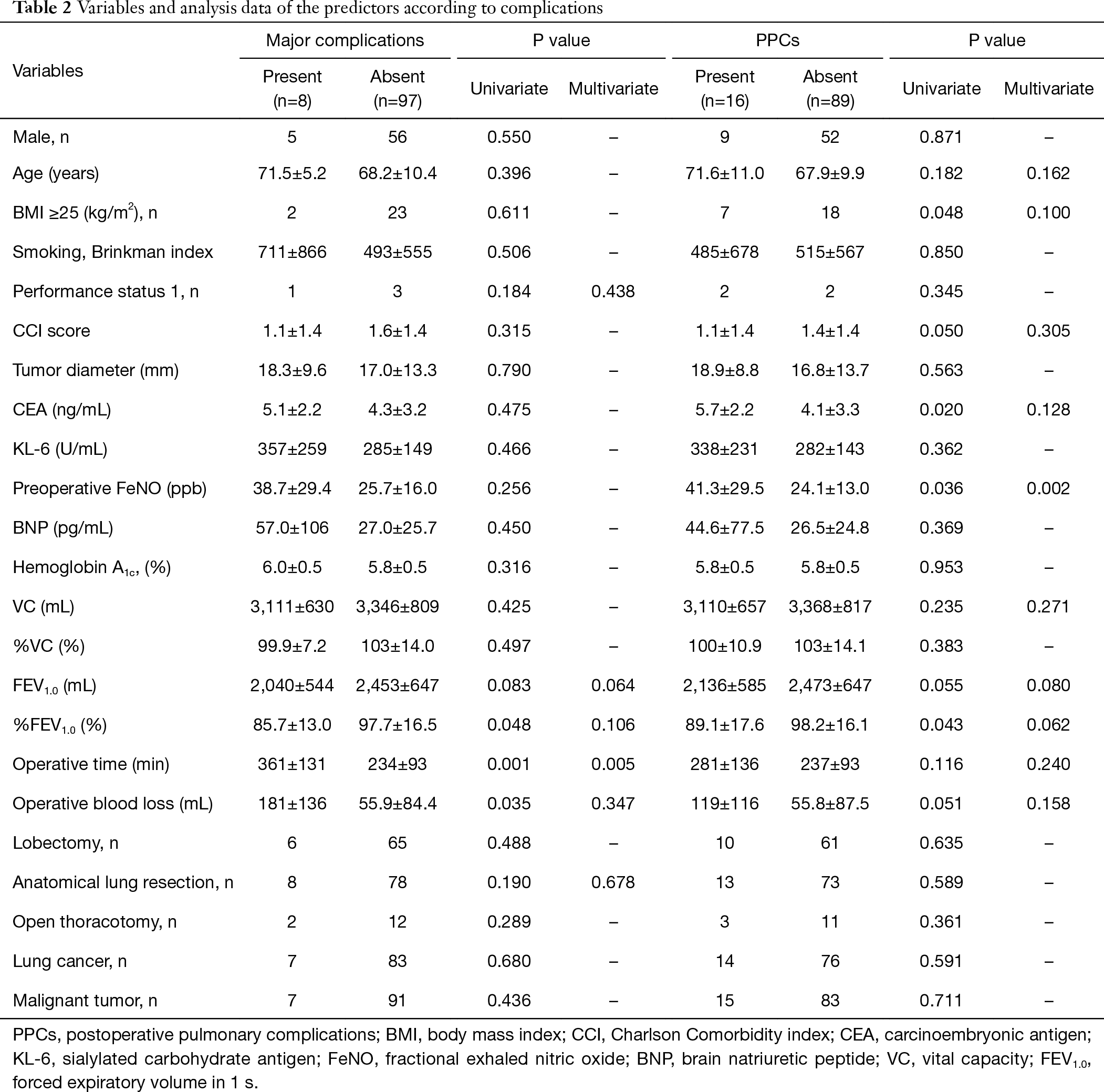 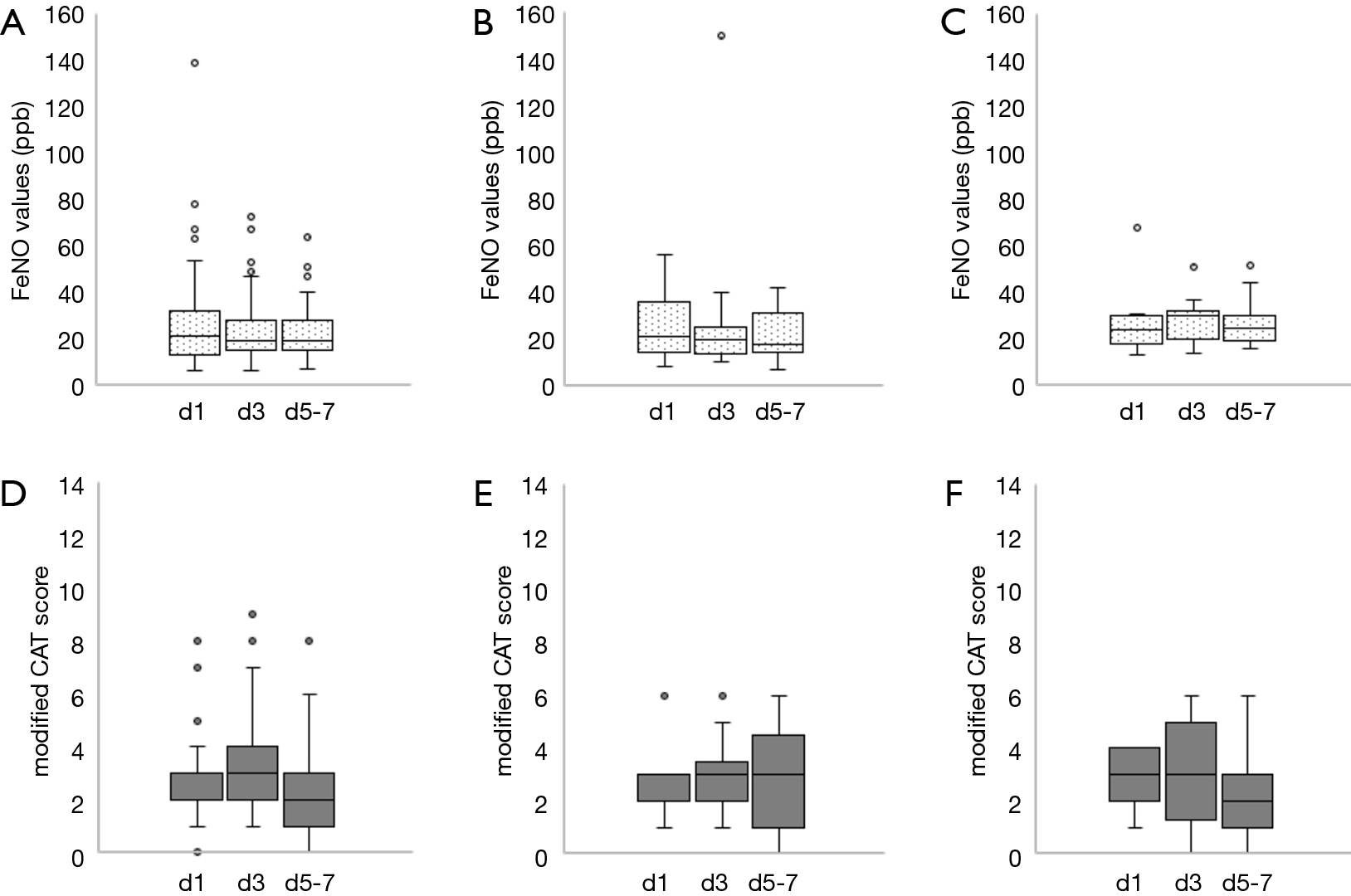 Statistical analysis was performed to determine the relationship between the secondary endpoints and variables, including postoperative FeNO (Table 3). Multivariate analysis revealed that postoperative FeNO was a significant predictor of additional medical treatment within 30 days of surgery (P=0.001, OR: 1.068, 95% CI: 1.028–1.110). No predictors for readmission were discovered on univariate and multivariate analyses. 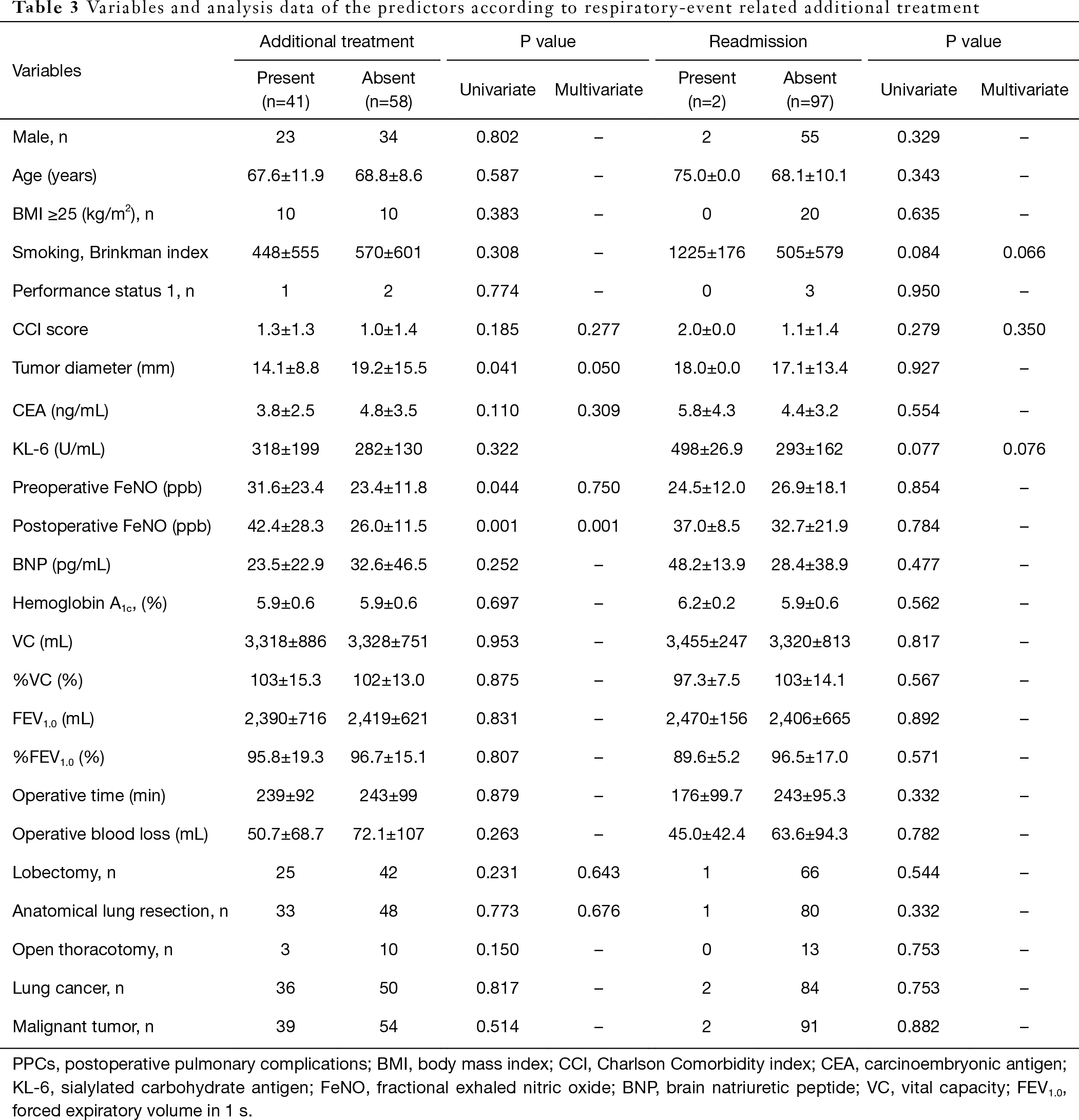 The principal finding of this study was that high preoperative FeNO affected the development of PPCs after lung resection surgery. We also demonstrated postoperative FeNO dynamics and that patients with elevated levels were more likely to require additional medical treatment.

FeNO, which is significantly correlated with sputum eosinophils (9), can reflect Th2-driven airway inflammation, which results in the upregulation of inducible nitric oxide synthase in the bronchial epithelium (10,11). FeNO is regarded as an indicator of respiratory disease with high bronchial inflammation, including asthma and ACO (12). It is widely used since it can be measured easily (13). Clinical research using conventional methods is generally avoided because forced cough and spirometry in the postoperative acute phase can lead to worsening of the patient’s condition. However, our evaluation method overcame these disadvantages and may be used in clinical settings.

We studied multiple surgical procedures and found that prolonged procedures such as lobectomy for lung cancer may have been responsible for major complications (Table 2). The Clavien-Dindo classification covers a wide range of surgical complications. However, it cannot adequately represent respiratory status in detail (14-16). We used PPCs in order to clearly define these individual adverse effects, which helped to prove our hypothesis. PPCs are especially associated with early postoperative mortality (17), and measurement of preoperative FeNO was valuable in preventing respiratory complications and subsequent deterioration.

We analyzed perioperative FeNO dynamics but failed to observe any statistical difference between each surgical procedure. Initially, we thought that the postoperative increase in FeNO values would be prominent for generally invasive procedures, including lobectomy. However, the increase was most pronounced (P=0.068) in the wedge-resection group, and unlike the other groups, it peaked on the third day, postoperatively. Complications and steroid therapy after surgery may have been responsible for false-negative airway inflammation levels in some patients. We assumed that neutrophilic inflammation caused by bronchial incision progressed soon after surgery and eosinophilic inflammation was suppressed in the anatomical resection group. Pain caused by surgical factors such as wound size and approach was thought to have contributed to the results of the symptom scores.

The results presented in Table 3 suggest that the local exacerbation of eosinophilic inflammation after surgery increased the need for additional treatment. Aggressive anti-inflammatory treatment, including early steroid inhalation therapy, may regulate the environment of the lower airway and improve the patient’s condition quickly. Further investigations with a larger sample size are required, to clinically implement perioperative management based on FeNO.

This was the first prospective study to evaluate and analyze perioperative airway epithelial inflammation and surgical outcomes in patients who underwent lung resection in a quantitative manner. The basic objective of this study was to explore patients at an increased risk and to investigate the feasibility of perioperative management strategies using FeNO. This was a single-center clinical study. Thus, there may have been selection, measurement, and follow-up bias. Moreover, cases involving severe invasive surgery, such as bronchoplasty and pneumonectomy were not included in this study; therefore, other risk factors may require complete consideration in patients requiring extended surgery.

In summary, our analysis demonstrated that perioperative FeNO was a significant predictor of surgical outcome among patients who underwent lung resection. Measurement of FeNO is a simple and useful method for preventing subsequent deterioration status in such patients.

We would like to thank Editage (www.editage.com) for English language editing.

Conflicts of Interest: All authors have completed the ICMJE uniform disclosure form (available at http://dx.doi.org/10.21037/jtd.2020.03.18). The authors have no conflicts of interest to declare.

Ethical Statement: The authors are accountable for all aspects of the work in ensuring that questions related to the accuracy or integrity of any part of the work are appropriately investigated and resolved. This single-center, prospective study was conducted at Shiga University of Medical Science Hospital and was approved by the institutional review board (protocol number 29-175). Written informed consent was obtained from each participant.